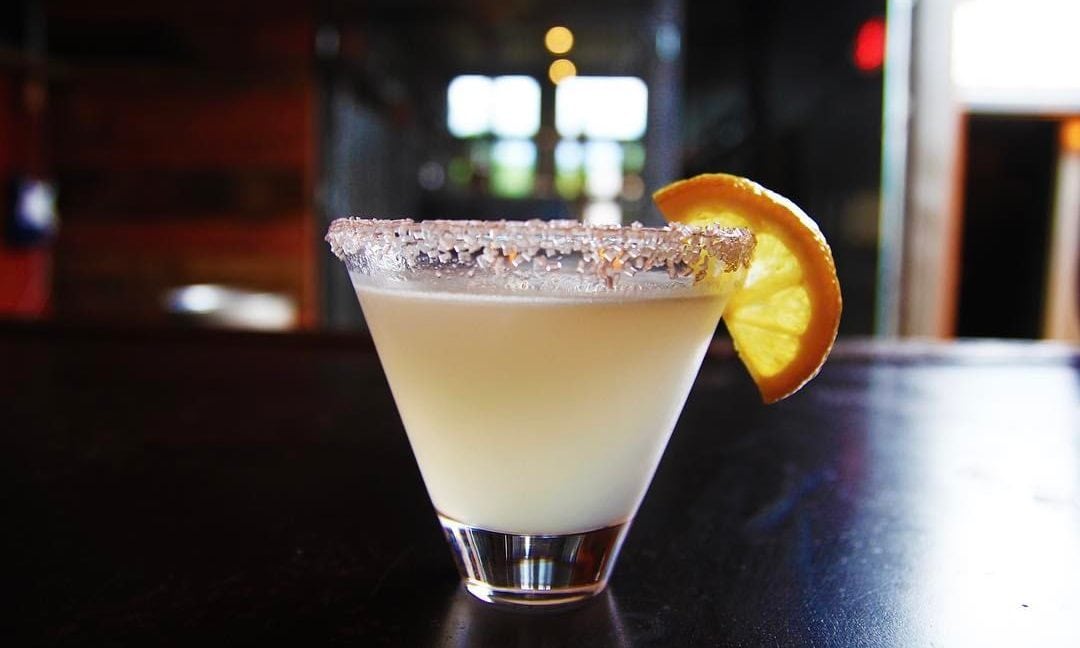 Northern Michigan’s newest distillery, Ethanolo¿y, opened in Elk Rapids on June 1. Take a look inside as MyNorth finds out what it takes to be 100 percent Michigan made.

When I first walk through the rustic wooden door into Ethanolo¿y, I’m greeted by the vibrating hums of condensers and receivers far off down the echoing hallway. Old-style tables line the path and the metallic siding on the walls gives the impression that I am entering a manufacturing plant during the mid-1950’s. Amid the smell of old wood and the quiet rumble of machines, I wander my way through the distillery. 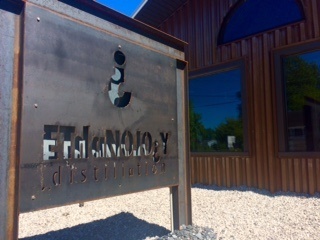 The first hello comes from a dark-brown Staffordshire terrier, Sofi, with a pink bandanna wrapped loosely around her neck. She sniffs my pant leg as I bend over to scratch behind her pointy ears. Almost on cue, I hear Nick Lefebre, co-owner of Ethanolo¿y, inviting me in from around the corner.

He’s hurried, carrying the distillery’s second dog, Mabel, down the steel-grated spiral staircase. Setting her down he shakes my hand, with a wide meaningful stare, one that says there aren’t enough hours in the day. He pours himself a mug of coffee from a copper-studded kettle, offering me a cup as well, and informs me that Geri, his wife, co-owner, and the first female head distiller in the state, was summoned to jury duty—disappointing news, as I had hoped to hear her viewpoint as well. 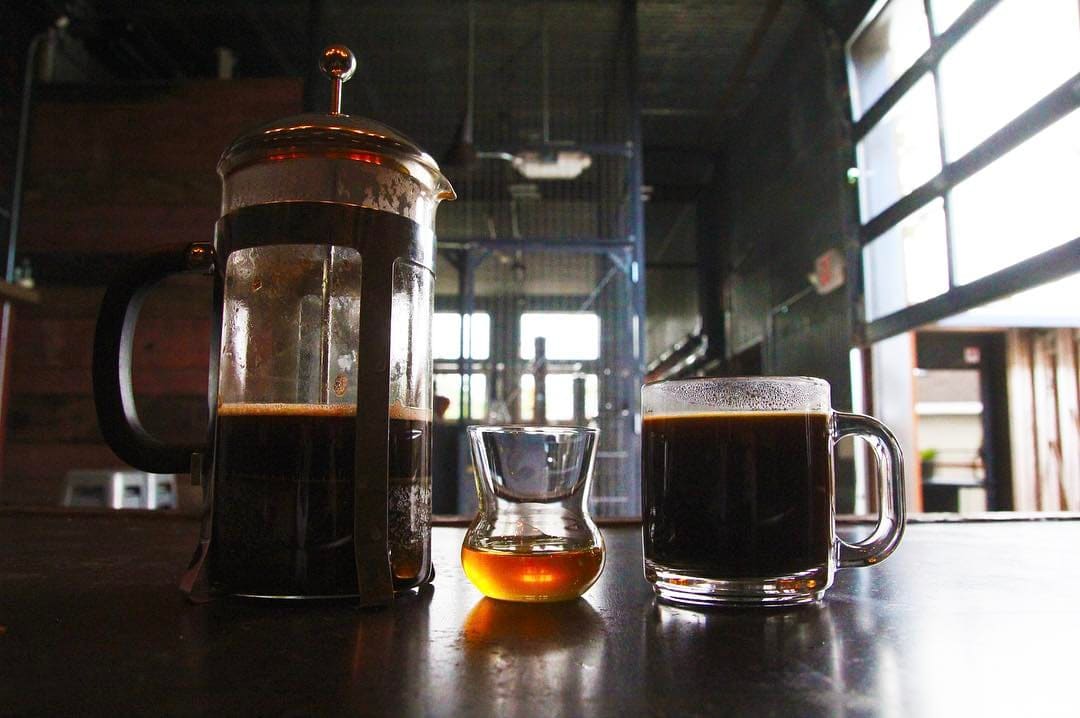 “Geri just had that creative brain type,” he explains when I ask about their partnership. “She gravitated toward the distillation, chemistry, artistic side, while I gravitated more toward the business side of things.”

He slaps the bottom of a glass cylinder jar full of thick golden liquid attempting to get a few drips into his mug, “Raw honey,” he tells me, noticing my curiosity, and there’s a moment’s pause before he continues. “For years and years it was tradition that the male would have that role (of head distiller), and now it’s changing, and Geri would tell you that it’s important for us to break down those barriers for all females.”

He motions for me to follow as he heads back up to the loft which overlooks the caged machines. 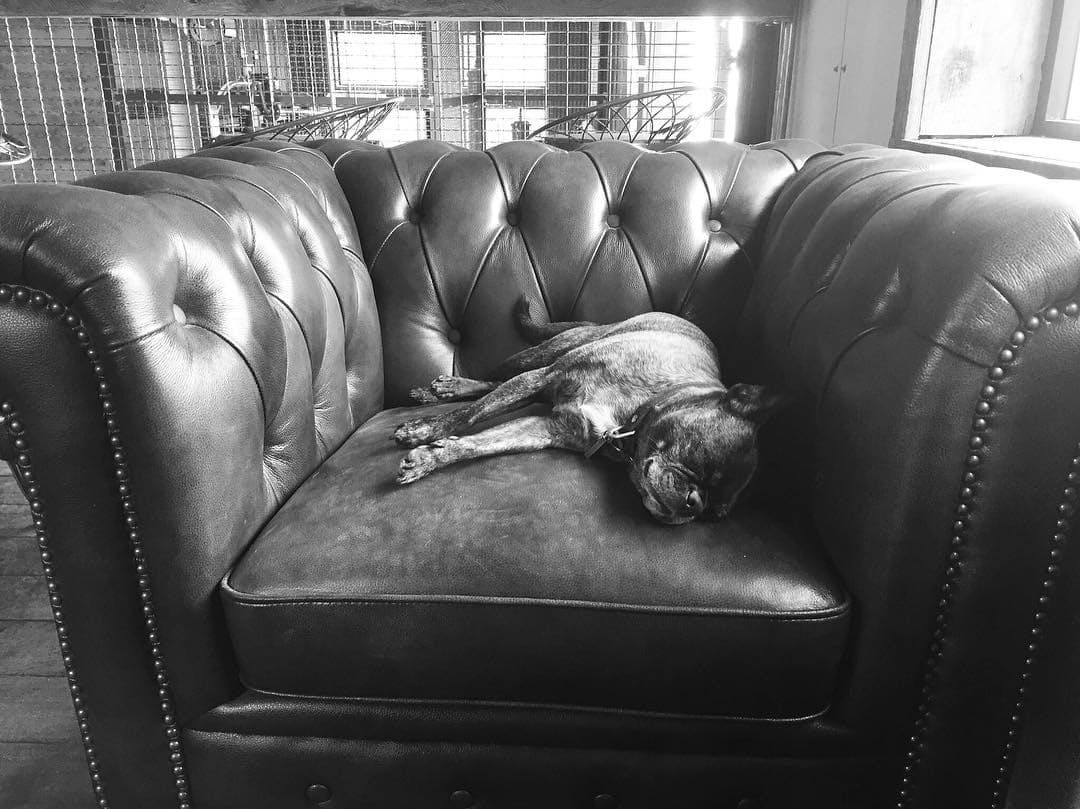 Nick asks how I’ve been since we last spoke while he turns the dial down on the speaker system. The song blends with the machines as if together they are a live band free-jazzing in the corner. Mabel jumps on the couch across from us and Nick slips off his sandals, resting his legs on the magazine-covered table taking a careful sip of his honey coffee.

Our conversation meanders, like the long dirt path that led to the old barn hidden in the shade of trees where the couple first found their upside down question mark logo.

“We were wine tasting on Old Mission Peninsula,” Nick begins. His story of the birth of their company is vibrant and colorful. His waving arms match the excitement in his voice. The two had finished their wine and found an antique barn where Nick stumbled upon a set of letterpress printing blocks. 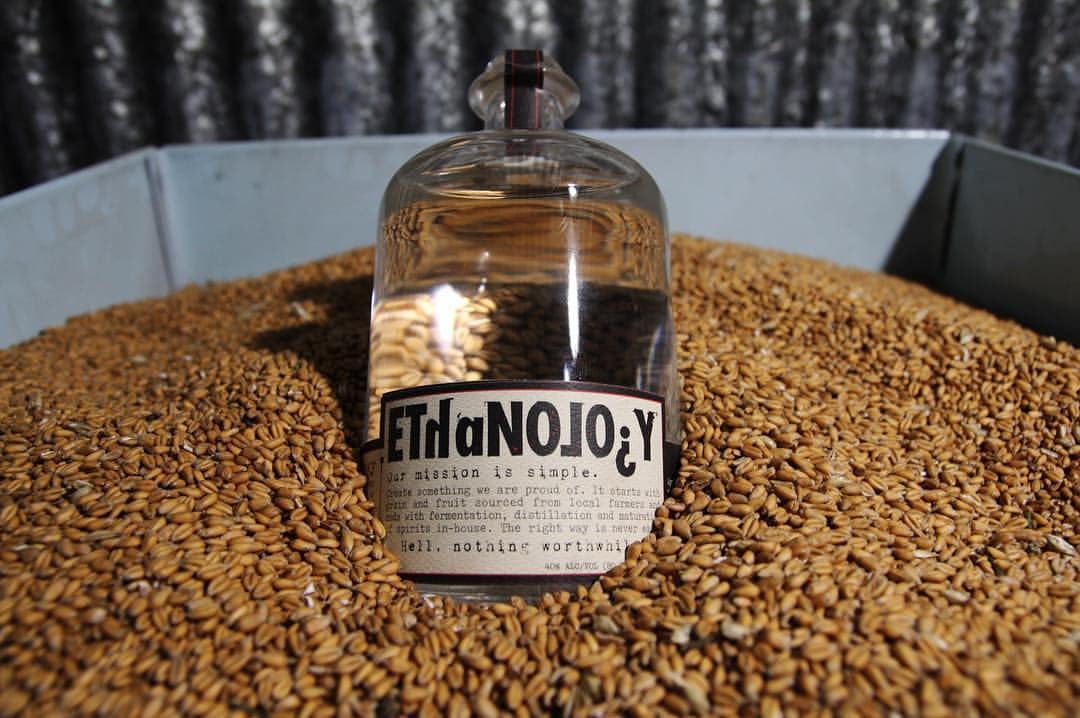 “I grabbed that block and it had this really industrial feel and it brought me back to a time when things were made better, things were crafted with care and time, and it immediately connoted a very high-quality nature,” he says. The exact nature, he thought, that demonstrated everything he and Geri wanted their company to stand for. “I couldn’t find a ‘g’ so I grabbed the question mark and turned it upside down.”

At this point in the story he jumps up from his seat and tells me he has the blocks, “Here, I’ll show you,” he says. He hurries down the steps leaving me for a moment to soak in my environment. Even with the dull roar of liquid in steel, the feeling is peaceful. This place is filled with a magical aura, one that builds excitement as you make your way through the building. A feeling like this could only be manufactured by both innovative ideas and a masterful design, by two people who love each other, their creations, and the place they are in.

Nick returns as abruptly as he left carrying a metal block. In order to preserve the print’s industrial nature, Nick and Geri took the blocks to Deep Woods Press in Bellaire where they had it pressed and digitized into their logo. “So you’ll see on the bottles and on our logo all the details from those original prints—like in the ‘a’ there’s a little imperfection.” 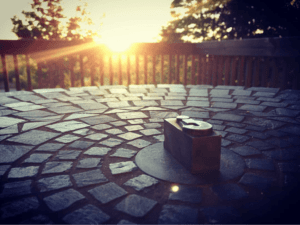 Although their logo may contain some minor imperfections, their products do not. “We ask that our customers be patient with us,” Nick says. “The trade off to being quality oriented is time.”

Quality, he tells me, is the reason their vodka, Siligo, sold out in the first 24 hours of the company’s existence. Quality is also the reason their whiskey is a year behind in production. “We had to source our seed and find a corn we liked. We never settle, and those are the extra details and precautions that we take that not many distilleries do not.” 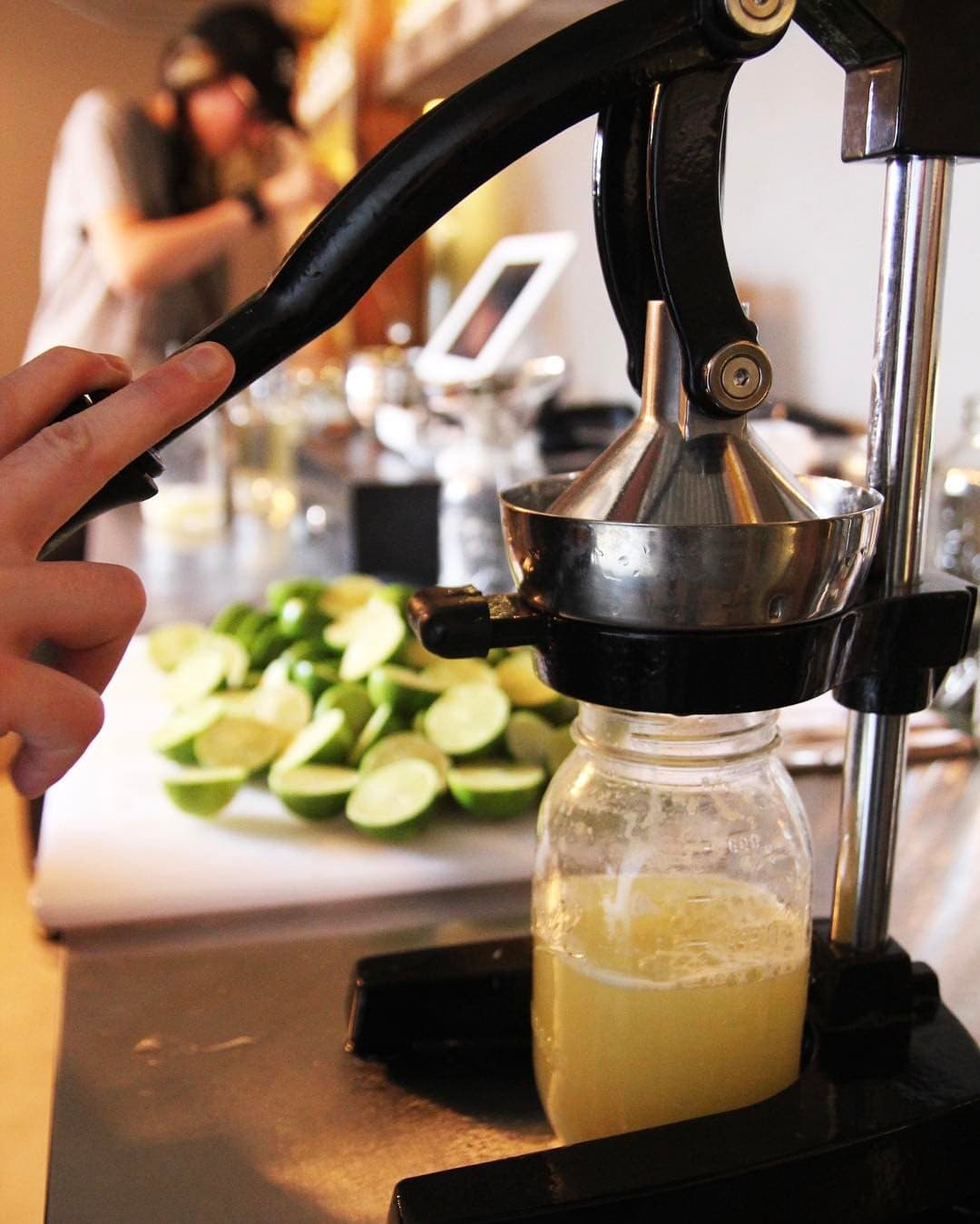 All of Ethanolo¿y’s ingredients are locally sourced, and to Nick and Geri, it would be irresponsible and “completely asinine,” (to use his exact words) to get them anywhere else.

“Northern Michigan is an agricultural Mecca. I mean we have the best fruit, the best grains in the world, the soil composition, the 45th parallel, the micro-climate within all of the lakes gives us a longer growing season,” his voice accelerates with excitement, and Mabel perks her ears. “And not only that, the people who pour their heart and souls into these products are our farmers, they are just as integral to our products as we are.” 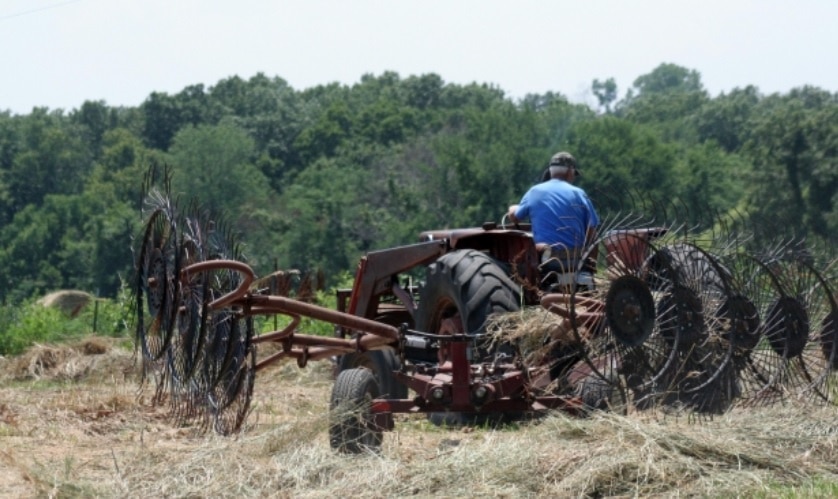 “To shake that farmer’s hand out in the field, and then two years later, he walks in the door and buys a bottle with his name on it— it has been one of the most rewarding things we’ve ever done.” 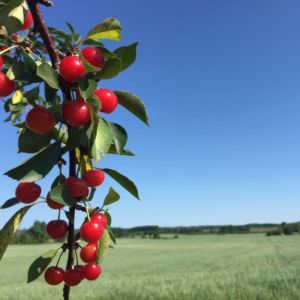 Nick was born in Alden and can remember growing up around the beautiful clear lakes and cherry orchards that surround the twisted roads of the pinky and ring fingers of the mitten.

“Elk Rapids is home,” he says. “We wanted to move back for our kids.” It is the same sense of home, and nostalgia, that he feels that puts a smile on my face as he says the words. “I think Northern Michigan has the potential to be a true agro-tourism destination. We have the most beautiful water in the world, we have some of the highest quality wines in the world, breweries, we have everything here that makes this such a unique space.”

And thanks to Nick and Geri, we are adding Ethanolo¿y’s craft spirits to the list.