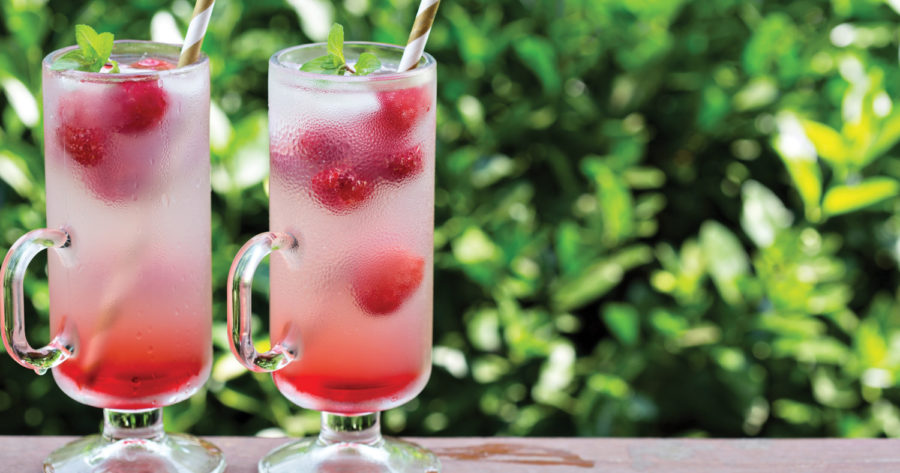 At this point, our porch represented a deserted gas station in South Dakota.

We used to have a back porch that was hell on earth. Because it was always sunny. Always. For 10 years, we put a grill, a patio table and a potted plant on our back porch. For 10 years, we were sunburned while eating chicken with lukewarm drinks next to a dead geranium.

It was great. Really, it was. The porch was our oasis. As planned, it faced the beautiful 12 acres of Michigan forest that we treasured. We would never let on to each other that the porch was a misery. We were so lucky!

In truth, though, we spent most of our summers huddled on our front porch that was just big enough for two chairs. It did the one thing our big back porch could not do: offer a reprieve from the orb in the sky.

Then, our neighbor called. Barb wanted my husband, a builder, to build a roof over her back deck because she, too, suffered porch hell. In a month, Tim built her exactly what we needed.

After driving by our nicely shaded neighbor every day for the next month, we came to a mutual decision to put a roof over our own back porch too. Barb will forever be my favorite neighbor.

At this point, our porch represented a deserted gas station in South Dakota. There were remnants of life—a grill rusted through at the bottom and wood railings twisting like old trees that catch fire from lightning every spring. It needed a major overhaul.

We got down to work. In a few weeks, Tim had built a roof over it and then it was my turn to mastermind a re-birthing of the old deck’s atmosphere. The first step was to haul our old couch up from the basement. Up against the house, it would stay dry. It felt wrong in so many ways, but our hillbilly couch became an instant favorite.

Suddenly naps were being taken on the back deck! Cuddling was happening under blankets on cool nights! Books were being read in comfort on warm days! The deck had truly become an outdoor oasis!

We abandoned our relatively new couch inside to return to our old love, our newlywed green plaid couch from 1996, outside. Next, we hung six panels of curtains, cinching them together in 3 separate pairs with old beaded dress belts I found in my dresser drawer. Everyone said, you hung curtains outside? But when they saw them, they saw they worked. The curtains offered a little alcove, a tightening up of the big open space. And, to be sure, the curtains outside were newer and prettier than the ones inside. The living room curtains went unappreciated along with the living room couch. We started spending all of our spare time out on the back porch.

Next we bought a patio set. Two chairs, a loveseat and an end table. It looked like … a fully furnished living room—where the gas station used to be! The overhaul was almost done.

It just so happened that the end of the school year was upon us, and, on a whim, we decided to organize a porch party and invite nearly 100 adults, kids and dogs to celebrate. The old weathered deck would have its night of glory even if the weight of our friends broke it in two. We made the event a potluck/BYOB and that meant we had only the work of a few finishing touches.

We hauled another relic out of the basement: the old wooden bar my father-in-law had built in the 1970s. We positioned it in the corner of the deck, stocked it with liquor, a dozen shot glasses and a giant martini shaker. We bought none of these. They were all gifts, things stuck in our cabinets, with no home of their own. Suddenly they had a home, and we were the next Cheers. We found some old lights I’d bought for camping and never used. Instead, we snaked the twinkly lantern lights under the deck chairs, along the rim of the floor. We had uplighting like sunset.

Last, we drilled holes into the old twisted wooden railings to stand tall tiki torches in them. Suddenly, the railings looked good as new. With that, we did away with the overhead lights altogether. The porch we loved to use for the day really, truly, came alive at night.

When people started to arrive for the party, the porch turned into a dimly lit Prohibition-era bar. The children were ushered from the scene, and the adults, quite happily, settled in.

Shots were administered at the bar. Wine was passed along the couch where a row of women in capris squeezed together and lounged. The men shared rum of an unknown year in the light of the tiki torches and everyone took turns telling stories.

Out front, on our tiny deck, we plied the children with popsicles and pop, enough to keep them at bay for a few hours.

Kandace Chapple is a freelance writer and publisher of Grand Traverse Woman Magazine. Visit her at www.kandacechapple.com.