Millions of visitors know this Michigan resort town primarily as a place of beaches, bike paths and boutiques—a coastal resort made for vacationers. But there’s a second side: a community of Traverse City neighborhoods, each with its own history and personality.

Naturally, the best way to experience these places is to take a stroll through them. Here are four “streetwalks” designed to highlight some of the city’s most interesting areas. 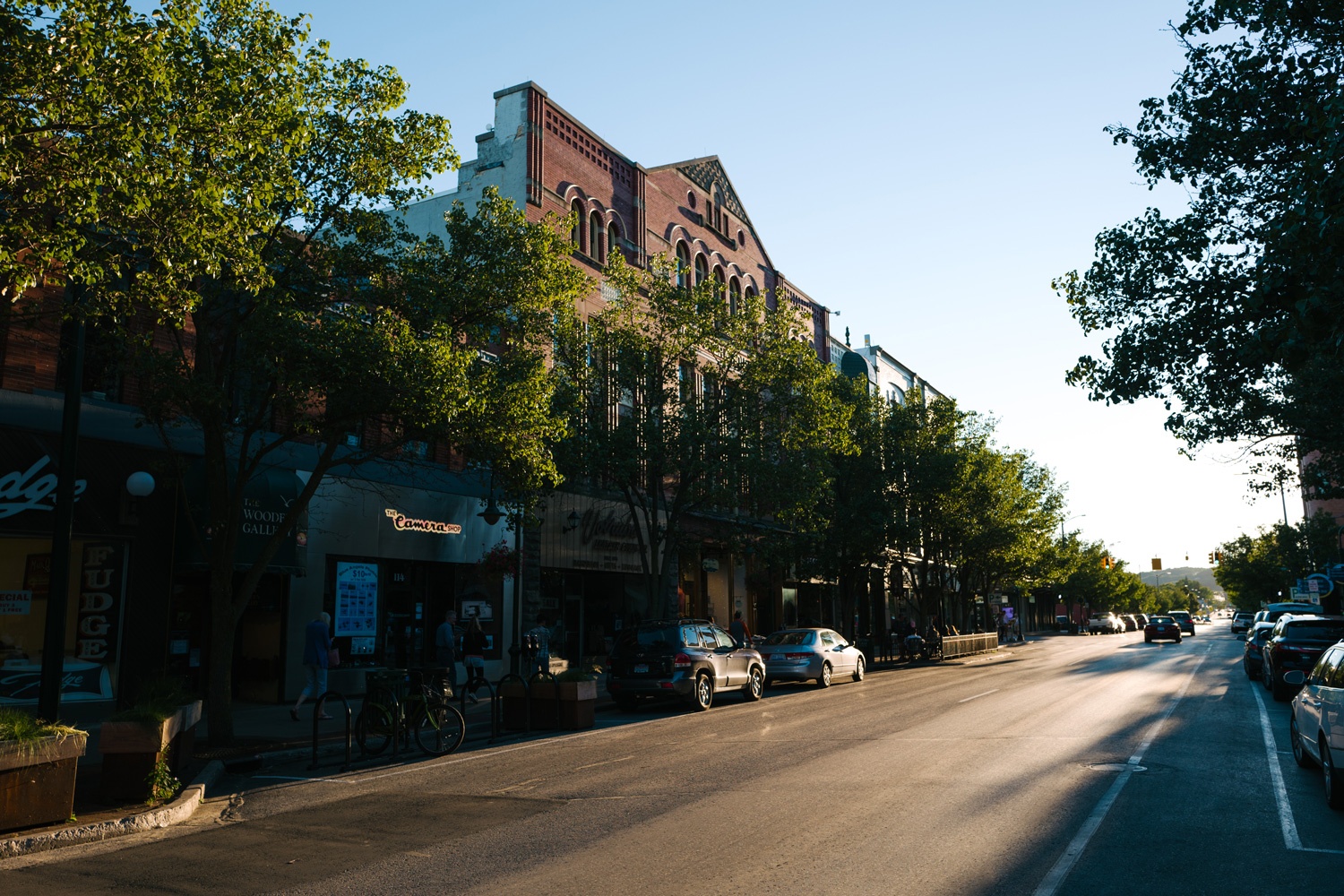 Traverse City’s tree-shaded, pedestrian-friendly downtown is often cited as an example of thoughtful restoration and restrained renovation. With scores of fascinating boutiques, restaurants, coffee shops and galleries, and lots of places to sit and relax, it’s the perfect destination for a fascinating walk that reveals the character of Traverse City. (During the 1970s, city officials almost decided to bulldoze much of it to make way for a massive downtown mall. Mercifully, that didn’t happen.)

At the corner of Front and Union streets stands the formidable 1883 Hannah-Lay Building, built by Traverse City founding father Perry Hannah and originally two city blocks long. Known as the “Big Store,” it was the largest store north of Grand Rapids and sold all kinds of goods: hardware, boots, shoes, dry goods, clothing, groceries, provisions and furniture. On the other side of Union is the handsome 1903 Traverse City State Bank building with its iconic tower and flagpole, and on the south side of Front is the gorgeous 1891 City Opera House, one of only six historically intact Victorian opera houses in Michigan and the first building in downtown Traverse City to install electric lights.

As you stroll east on Front, you’ll see a landscape of one or two-story buildings whose charming storefronts recreate the feel and flavor of a small-town shopping district of the late 19th century—with a great many upgrades, of course. Most of these quaint shops, boutiques and restaurants are much more recent, but if you wander instead you’ll see many touches (long narrow interiors faced with lovely golden Markham brick, pressed tin ceilings, fascinating hardwood or tile floors) that hearken back to those days.

One more recent addition is beautiful in its own right. The 1949 State Theater is an art deco beauty that was brought back to life in 2005, thanks to the volunteers of the Traverse City Film Festival: a lovely blend of classic decoration and 21st-century technology, including a fiber-optic representation of the night sky worthy of a planetarium. 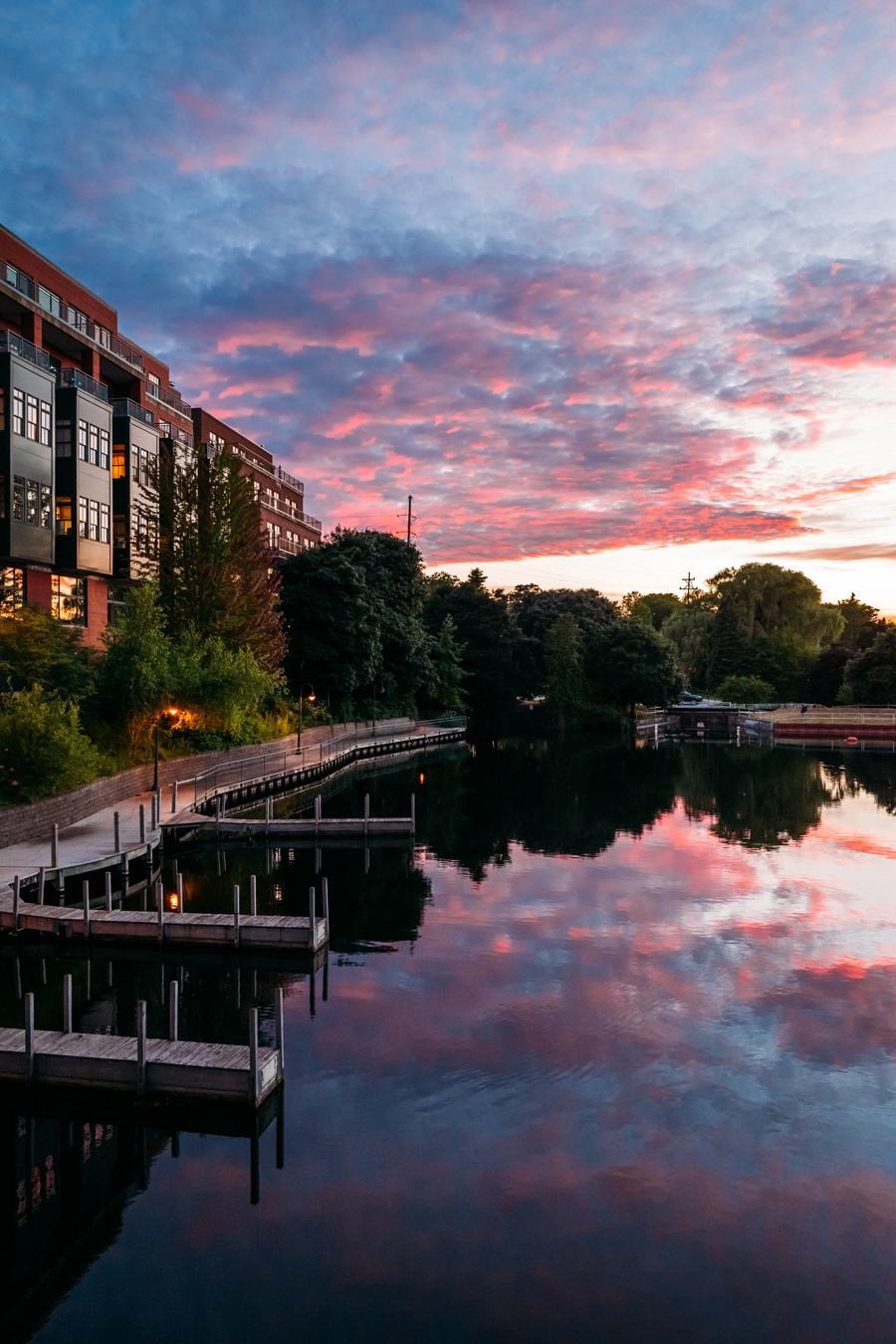 This is the oldest of Traverse City’s fashionable neighborhoods, the most prestigious place to have a house until 1894, when Perry Hannah finished his castle on Sixth Street and started the housing boom in what is now known as the Central Neighborhood. And probably the best way to sample it is by strolling down Washington Street.

Because of its greater age, this neighborhood is filled with fascinating history and an eclectic mix of styles. The oldest homes are modest “carpenter houses” that were later added onto as their families and family fortunes grew. A good example is the 1858 home of newspaper editor Morgan Bates of the Evening Record at 413 Washington, which started with three rooms and ended up with 10. It’s bracketed between the ornate 1880 home of his competitor, Elvin Sprague of the Daily Eagle, and the 1870 house of teacher/druggist/photographer S.E. Wait, who taught the first school here (aboard the icebound schooner Madeline) in 1851.

Just a few houses down is a strangely bent tree, with a historical plaque identifying it as having been “bent by Indians” to mark the footpath that was once the only land route between Detroit and the Straits of Mackinac. Farther along, at the corner of Washington and Wellington, are a pair of splendid mansions: the romantic 1894 Victorian home of Industrialist Henry Hull and the gorgeous 1905 neoclassic home of his son, Cary—now the Wellington Inn B&B. Across the street, at 502 Washington, is the charming house where Michigan governor William Milliken grew up.

Two blocks of charming Victorian homes later, you’ll reach Railroad Avenue and cozy little F&M Park. A century ago, this was where the railroad tracks ran – an overgrown tangle of canneries, weeds and dumping grounds, and the neighborhood to the east was not considered particularly fashionable. Today, although it may lack grand historical names, the east stretch of Washington is every bit as lovely as its neighbor to the west.

Traverse City’s most elegant thoroughfare is Sixth Street, known a century ago as “Silk Stocking Row,” lined with graceful Victorian homes and tall shady trees, and paved with dark red bricks that came as ballast in the holds of sailing ships. At the end of the 19th century this was the preferred residential street for the city’s commercial and manufacturing elite—most notably Traverse City founder Perry Hannah, whose statue in Hannah Park marks the street’s eastern end, and whose imposing 1891 mansion set the tone for the rest of the neighborhood.

The Hannah House (now the Reynolds-Jonkhoff Funeral Home) has more than 40 rooms (each paneled in a different wood) and 10 fireplaces. Across the street is the imposing Carnegie Library built in 1904, now home to the Crooked Tree Arts Center. There are splendid homes up and down the street for six blocks, all the way to Division. Unlike the older neighborhood along Washington, Sixth Street was a “planned community” whose houses were all sited exactly the same distance from the street.

Most of them—especially those closest to Hannah’s amazing Victorian confection—were built in the exuberant Queen Anne style, with lots of gingerbread, gables, towers and turrets. There is, for instance, the 1894 home of cider tycoon John C. Morgan at 325 Sixth, the ornate 1891 home of former city clerk Charles Beers at 213 Sixth, the lovely “honeymoon cottage” at 501 Sixth, built in 1892, and the 1886 Cuyler Germain house at 333 Sixth. 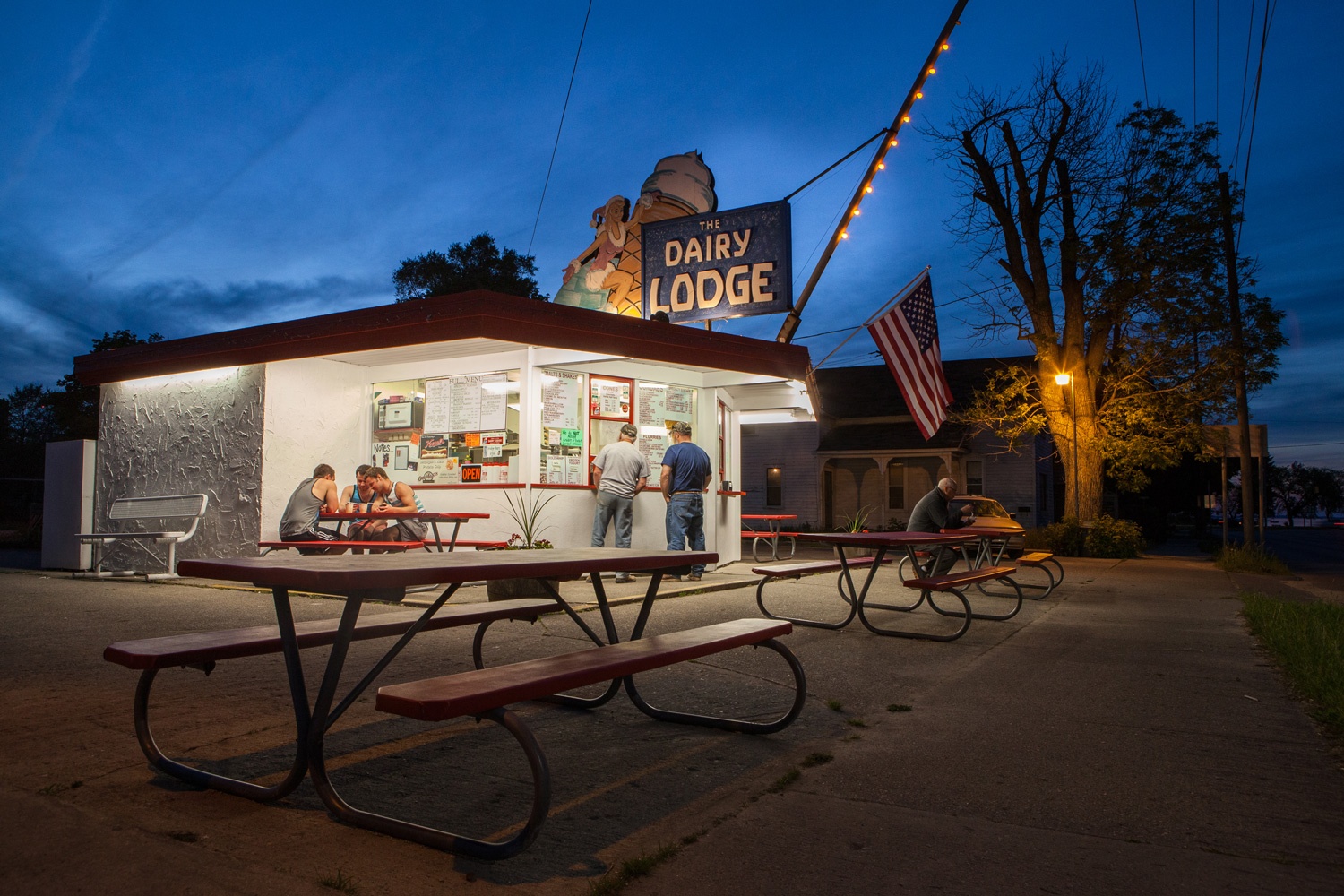 A century and a half ago, Traverse City’s West Bay waterfront wasn’t for beachcombers; it was a loud, smoky collection of sawmills, docks, stables and warehouses, and nearby were the homes of the people who labored in those places—many of them Bohemians from what’s now the Czech Republic. Today, this neighborhood is known as “Slabtown,” because many of the houses were built with slabs of scrap wood salvaged from the mills.

Now that bayfront property is at a premium, it’s hard to see much evidence of this working-class past, but it’s there if you care to look for it—and Randolph Street is a good place to start.

Begin a few blocks east of Division, where it dovetails into Bay Street, and you’ll see a few remaining homes and even a few commercial buildings—delicious Bay Bread, for instance—on what was once the waterfront. Just on the other side of Division are several gems: the Dairy Lodge (still a soft-serve mecca for ice cream lovers), the classic Plamondon’s Barber Shop, and Sleder’s Family Tavern. Built in 1882 as a Bohemian workman’s social club, Sleder’s is the oldest continuously operated tavern in the state and still a favorite local watering hole, where you can belly up to the original carved mahogany bar amid a menagerie of stuffed animal heads, including a famous moose named Randolph.

As you head west you’ll see a scattering of adorable little houses on both sides of the street; many are the slab-walled homes that gave the district its name, now gentrified and adapted for 21st-century owners. Finally, as the street rises on its way to the Hickory Hills ski area, there are several exquisite Queen Anne houses, including the 1883 Hastings home at 1214 Randolph, which has a lovely stream running through its yard, and the 1885 Wells home at 1304 Randolph.

Check out this MyNorth video to see what it’s like to live, work and play in Grand Traverse County.