The bride and groom’s big day at Sommerset Pointe Lake Charlevoix was perfect: relaxed, romantic and full of sparklers and s’mores.

Here’s the thing. Aurielle and Kyle can’t agree on when they actually met. Kyle met Aurielle at a party of a mutual friend, while Aurielle met Kyle at a trivia night a couple weeks later. Due to Kyle’s expansive knowledge of useless facts, the team won trivia that night and a pizza was the prize. Aurielle was hungry and impressed and thought, What a nerd, but free pizza is awesome.

Kyle thought, Why is this girl introducing herself when we already met? They became friends and started going out together often. Aurielle was the best wingman Kyle has ever had: she was always setting him up on dates. What she failed to realize was that all he wanted was her.

Fast-forward a few months and through more pizza outings, they developed a great friendship and a strong bond, however, he never worked up the courage to express how he felt. He accepted a great offer for a new job in Wisconsin. Aurielle was sad, but she encouraged him to go.

Long story short, he eventually told her how he felt, and the two started dating. Once she graduated, she moved to Milwaukee to be with him. And that was where he proposed, by having the words “Will you marry me?” printed on a dog tag for her dog, Jager. On an evening walk through a park near their apartment he asked her to read it—then got down on one knee.

Aurielle grew up in Boyne City and had always dreamed of an outdoor wedding on Lake Charlevoix. The couple opted to have everything—the ceremony, cocktail hour and reception—all at Sommerset Pointe Lake Charlevoix so that their guests could relax. “Between the food, the lawn, the beautiful tent and the option to customize [the event] as much as we wanted, it was absolutely perfect,” Kyle says.

And relax they all did. They ordered up the bride’s specialty drink, Frisky Whiskey (Jack Daniel’s and Vernors) and/or the groom’s favorite, John Daly (Arnold Palmer and vodka). They rocked out to the live Brena band (who played from the ceremony, through the cocktail hour and reception). They played yard games, including a special only-in-Michigan game of cornhole, in which the beanbags were shaped like both the Lower Peninsula (Aurielle’s home peninsula) and Upper Peninsula (Kyle’s home peninsula).

And at the end of the evening—with visions of their upcoming honeymoon in Italy dancing in their heads—this fun and romantic couple premiered the same-day-edit video they’d had made by Style and Motion video company. The beautiful video ended as the reception had—with Kyle picking Aurielle up as they made their way through a sparkler sendoff from their friends and family.

This feature is in the 2017 issue of MyNorth Wedding.
Get your copy for more Up North wedding inspiration! 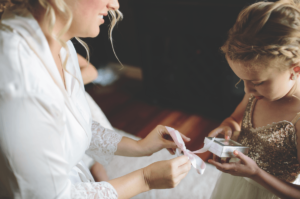 Aurielle gives flower girl Morgan Koskinen a necklace with her first initial on it.

The bar stayed open through the entire event, from the ceremony on.

The bridesmaids wore blush in a variety of textures from lace to sequins.

The couple’s first dance was to “Dancing Shoes,” by Green River Ordinance.

The centerpieces had a nautical flair. 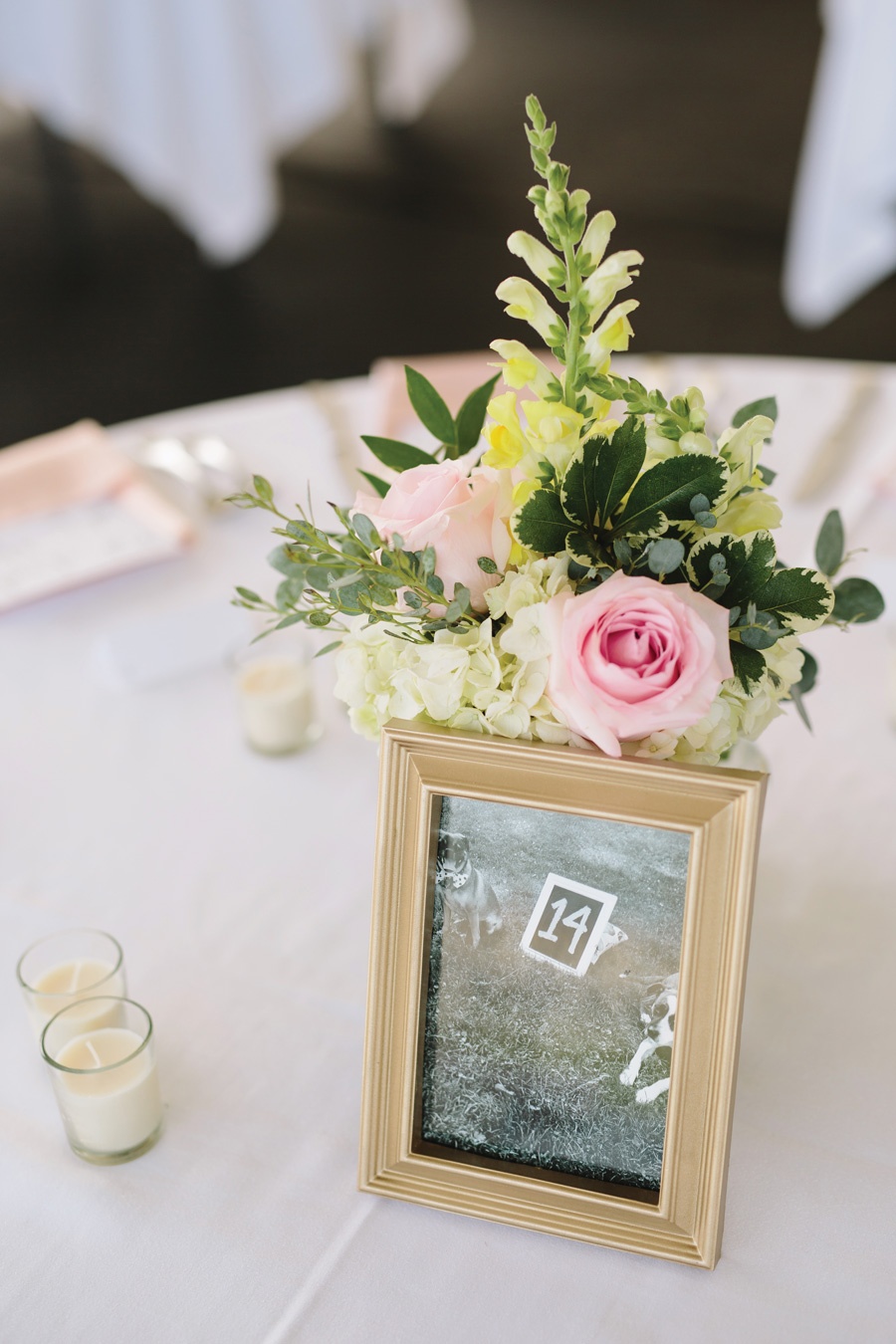 A view of the reception tent from Lake Charlevoix.

Katie and Peter: A Recipe For An Up North Boho Wedding