One of the lesser known festivals takes place at Fountain Point Resort on the shores of Lake Leelanau. French fur trader Aymar De Belloy actually initiated the resort in 1867, when while drilling for oil, he struck a gusher of sparkling water. Twenty-two years later, guests began arriving. In 1937, Victor A. Gebhardt purchased it; today it is owned and run by his granddaughter Susan. And the namesake fountain still flows.

This year, the resort is hosting a series of shows by regional acts. It kicks off June 18 with Traverse City’s own Accidentals. The trio formed by multi-instrumentalists Savannah Buist and Katie Larson while in high school was completed with the addition of percussionist Michael Dause. Today the folk-jazz-bluegrass-classical-jam group is signed with Sony Masterworks. The label will release the group’s newest album, Odyssey, in August.

The Accidentals are among 16 performers scheduled throughout the summer. Other artists include Jazz North on July 6, Nik Carman and the True Falsettos on July 30, and the final show August 13 by Davina and the Vagabonds. Click here for a complete schedule. Tickets are available at MyNorthTickets.com.

At Bay View, the Methodist enclave on the northern edge of Petoskey, you’ll find a summer schedule of lectures, performances and religious services. Founded in 1878, the Chautauqua is famed for its Victorian cottages and restaurants like Stafford’s Bay View Inn and the Terrace Inn. Chautauquas were an adult education movement in the late 19th and early 20th centuries which brought entertainment and culture throughout the rural U.S., with speakers, teachers, musicians, entertainers and preachers.

Today that tradition continues at Bay View with a complete slate of lectures, faculty and student musical performances, beginning June 18, as well as the musical Pippin, July 13–15. Don’t miss: Tenth Avenue North, Gospel Music Association’s New Artist of the Year, and returning favorite Chris Brubeck with the Michigan premiere of his orchestral piece America, dedicated to the work of famed photographer Ansel Adams.

The festival will also feature headliner Bruce Hornsby and the Noisemakers July 21. Hornsby came to prominence in 1986 with his debut album The Way It Is, its namesake single topping the charts. Since then he’s explored a variety of genres, from pop to bluegrass, jazz to electronica. He’s toured with the Grateful Dead, contributed to albums by Squeeze, Bonnie Raitt and Stevie Nicks, and collaborated with jazz luminaries Wayne Shorter, Christian McBride and Jack Charlie Haden, bluegrass musicians Ricky Skaggs and Bela Fleck, and pop stars Sting and Elton John.

Bay View also welcomes the country a capella group Home Free on July 27. Originally formed in 2000 as a barbershop-style group with a human beatbox accompanist, the group went through several changes over the years. Adopting a more countrified sound, it won season four of the NBC a capella competition show The Sing Off.

The Manitou Music Festival kicks off with its annual patriotic salute by the Northport Community Band on July 3 at the old school house lawn in Glen Arbor. Community bands with their roots in the town on the tip of the Leelanau Peninsula date back over a hundred years. This version of the band was started (or revived) by Kenneth G. Bloomquist about 20 years ago, when the former director of bands and head of the school of music at Michigan State University moved to Northport upon his retirement.

Several returning favorites and usual suspects are part of the Manitou Music Festival, including Mulebone and the Moxie Strings, while newcomers include the folk-funk trio Emma Cook and Questionable Company and the Gothard Sisters, a Celtic-inspired folk music group from the Pacific Northwest (check out this video from their YouTube Channel).

Further north, between Harbor Springs and Cross Village, Blissfest celebrates the summer with a cornucopia of acts. What started as a one-day folk fest in 1981 has morphed into a lineup of artists that run the gamut from rock to rap while still maintaining a host of rootsy performers.

This year’s headliners are Los Lobos, appearing July 7, and Michael Franti and Spearhead, performing July 8. Los Lobos may have gained its greatest initial fame from its soundtrack work on the 1987 film La Bamba, but the six-member group already had nearly a decade and a half of musical experience under its belt by then. In the 30 years since, the same sextet has continued to mix and match its Tex-Mex, rock, r&b and traditional music.

Poet, rapper, singer Franti and his group Spearhead meld everything from rock to reggae, with socially conscious lyrics. Franti is known for his support for a variety of peace and social justice issues, including peace in the Middle East.

Other genres represented at the weekend camping and music gathering are Cajun (Chubby Carrier & the Bayou Swamp Boys), vintage Americana swing (the Dustbowl Revival), old-timey fiddle music (Donna the Buffalo), even Japanese taiko drumming (Yamakiya Taiko Drum Group). Then there’s the impossible-to-categorize House of Waters, which incorporates jazz, Irish, African and South American sounds via bass, drums and dulcimer. Hear their sound for yourself in this video by groundUPmusicNYC.

The mostly-classical Baroque on Beaver runs July 28 through August 6. Period performance group Bach and Beethoven Ensemble from Chicago opens the festival with the gala benefit concert: “A Gaelic Summer” showcases the everyday side of Baroque life with music from “Calliope, or English Harmony,” a set of drinking songs from the British Isles.

Ensembles including the Beaver Island String Quartet, Emerald Isle Woodwind Quintet, Metallurgy Brass Quintet, Festival Chorus, Festival Orchestra, pianist May Phang, and many others perform music from Bach, Handel, Purcell and numerous other classical composers, as well as some from outside the idiom, such as Richard Rodgers and Ennio Morricone.

[Check out this Traverse Magazine feature about Baroque on Beaver] 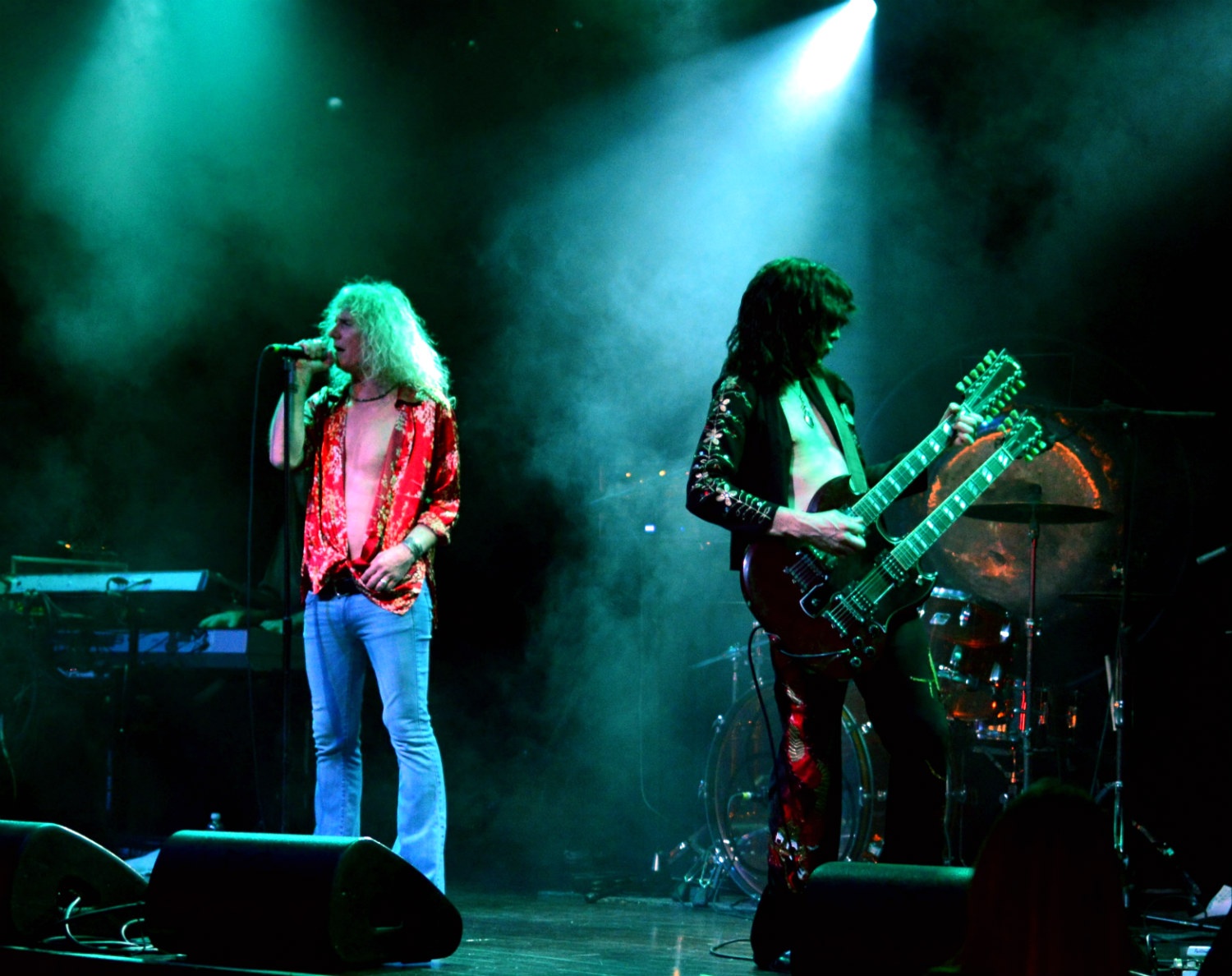 The sound and spirit of seminal 70s rockers Led Zeppelin, courtesy of Zep tribute band Zoso, will echo through the Village at Grand Traverse Commons when the Traverse City Summer Microbrew & Music Festival returns for its 10th year August 11 and 12. The thunderous sounds of Page, Plant, Bonham and Jones and the look of the band that invented heavy metal are eerily captured by Zoso, which has been called “the closest to the original of any tribute” by the Chicago Sun-Times.

And of course, the festival will bring in hundreds of the best brews in Michigan and outside the Great Lakes State, including some from our neighbor to the north. All told, there will be over 300 beers, ciders, meads and wines, and food as well.

A week after the Microbrew fest, Hoxeville welcomes a host of Americana artists and others to the tiny burg of Wellston. Hoxeyville got its start in 2003 when Kalamazoo luthier Jake Robinson decided to celebrate music and musicians in a peaceful locale far removed from downstate cities. Guess he succeeded; it’s now ensconced in a 150-acre site surrounded by the Manistee National Forest. The area’s charms eventually seduced Robinson himself, who moved to the area almost a decade ago.

This year’s headliners, Greensky Bluegrass, perform two nights. Check out this video from their YouTube Channel.

[Check out this Traverse Magazine feature on Joshua Davis]

Of course, you don’t want to forget Interlochen Arts Festival, with a mix of classical, rock, and country shows. ZZ Top kicks things off June 1. Campers perform throughout the summer. And the National Cherry Festival runs from July 1–8, with a slate of performers including comics, a 90s dance party, classic rock and country acts.