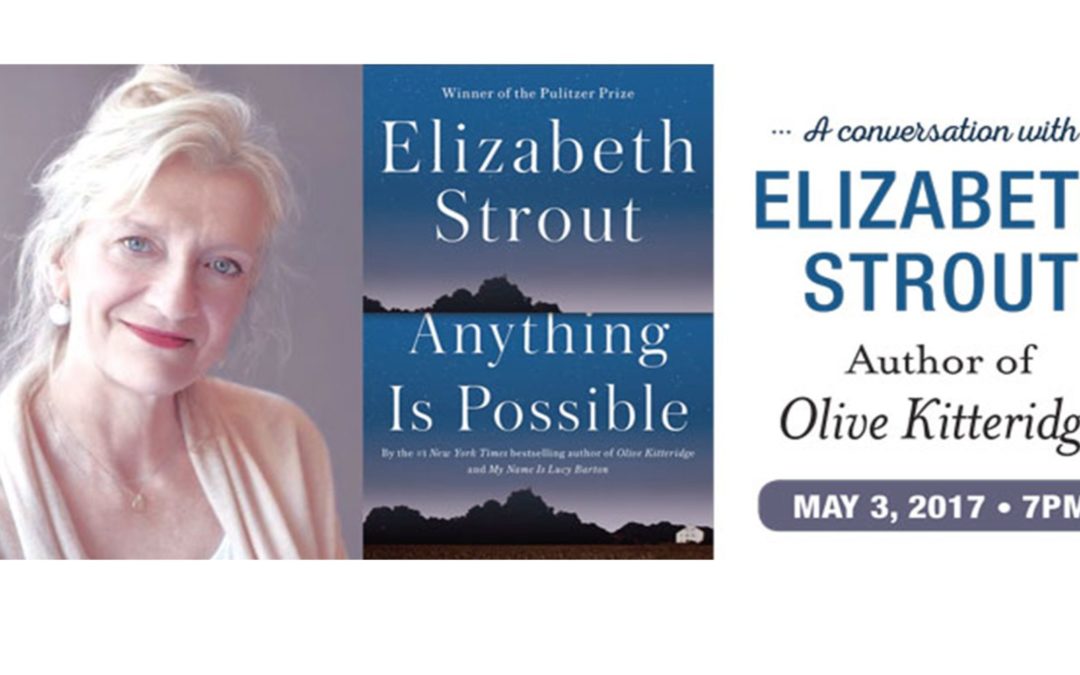 The National Writers Series‘ Benjamin Busch speaks with Pulitzer Prize-winning author Elizabeth Strout before they take the stage in Traverse City’s Opera House on May 3 at 7 p.m. for a conversation about small towns, watching people and writing some of the most beloved stories of our time. (Tickets Available Here.)

Benjamin Busch: So we’re all very excited about you coming to Traverse City for the National Writers Series. Where is your book tour for Anything Is Possible taking you this year?

Elizabeth Strout: Well I just started it so I’m in DC at the moment and then I go to Nashville tomorrow. Then I don’t know I go to Boston, Philadelphia, then I go out west to San Diego and San Francisco and Seattle. 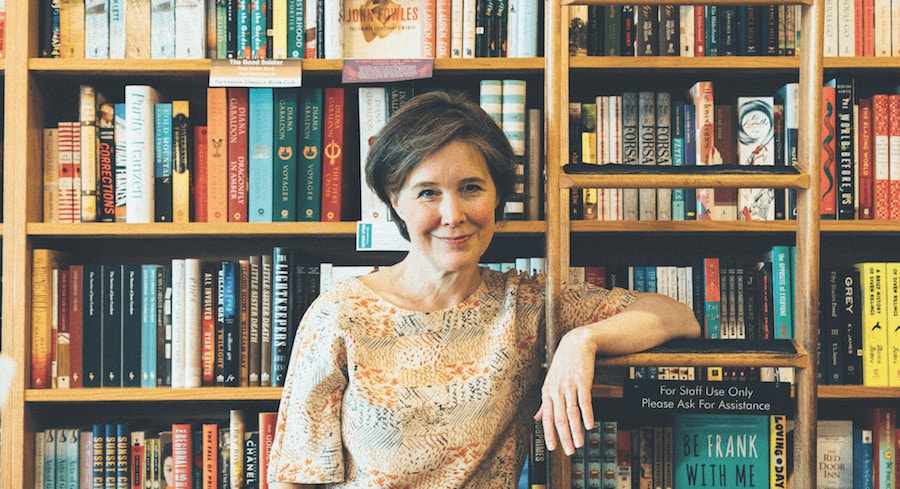 BB: She also has a policy about not knowing where she’s going the next day.

BB: So when she arrived in Traverse City it was almost like a lovely surprise to her.

ES: (laughing) Right, exactly. I understand. I do two days. Two days is my limit.

BB: When you were young confined to a small town in Maine, the world, to you, was a city somewhere, like New York. Like your character from My Name is Lucy Barton, you escaped and live in New York part time now. But your characters are often trapped in small towns and there’s this great sense of isolation, this need to flee. But you still return to Maine even now.

BB: What is it about that place? You say it’s grown into you so much from your youth that it’s kind of a part of your sense of self. Why do you go back?

ES: Well honestly I go back because my husband is from there and he loves it so that’s a big part of why I go back. But I’m drawn back to it. I’m just drawn back to it and I think that’s not necessarily uncommon for people who have left, as they get older. You know I’m 61 now so I think there’s some sense of just being drawn back.

ES: I love it and I don’t love it. Let’s say I am ambivalent. And yes there are times I love it very, very much. And then there are times when I think, Oy…time to get back to New York. So it’s that kind of relationship.

BB: Do you think that pioneer feeling of your childhood still drives your fictional worlds? You always felt, in describing your childhood, like you’re on the fringe of the earth.

BB: Your characters continually seem to find themselves in places that are spare and solitary. You don’t write about people in the cities much. The one place you wanted to go.

BB: I’m fascinated by childhood and how it feeds our lives. Why were you so convinced that it was better to be somewhere else?

BB: Did you ever think now, looking back, if you had grown up in New York City what kind of a writer you’d be? What kind of observer would you be without those long Maine pauses?

ES: Yeah. Exactly. I don’t think I’d be the writer I am. I really don’t, I think the isolationism of my background was a breeding ground for a writer. You know for one thing, I developed, very early on, inner resources that a child does when they’re spending so much time alone and isolated from the world.   I think that’s very important for me as a writer to have time to just be in my head and stay in my head, just watch.

BB: And Lucy Barton does get out, and she’s a writer, but what have you done in your life to compensate for the penance you served in isolation? Do you navigate civilization,? Do you actually take advantage of freedom? 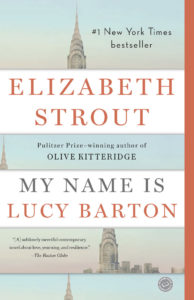 ES: No. I mean we go to museums once in a while. I just like to be on the streets of New York. I like to see people. They’ve just always, always fascinated me. In Maine there are not that many people to see.

BB: But you seem to be able to look at them a lot longer in Maine. Your characters are well-observed versus the people rushing by in a city. Are you able to draw stories out of people based on such brief observation?

ES: Yes I do. I’m on the subway a lot and I see so many people. I get to watch them from behind my sunglasses and there are physicalities that I use and then I imbue my own characters into them.

BB: That’s interesting. And I know you took stand-up, at the New School.

BB: Well you pulled it off too, but you don’t write comedic characters, you use wry, sometimes dark humor.

BB: But is there something you see in your characters which is funny to you?

ES: Yeah. I see a lot of humor in Olive Kitteridge. And I think there’s humor in The Burgess Boys. I mean with Lucy and this book, not as much humor in the ordinary sense of the word.

BB: With all this rushing around you’ve had to do for so many of your books of recent, do you enjoy the displacement of travel?

ES: It’s interesting that you ask that because just today when I walked into the hotel room I thought, ‘Oh I recognize this smell, I like this smell.’ So I like hotel rooms in a way and I like being displaced in a way.

BB: Is that a very different motion in you life, I mean when you write it’s a sedentary art, kind of at your own pace, which serves your characters, who are always very contemplative characters, every one of them.

BB:  As soon as you walk out of your place in New York, you’re surrounded by absolute rush, you walk into a river. Is it strange to live in the membrane between those two worlds?

ES: It is. But to be in New York serves me now because I think you’re absolutely right, a writer spends so much time alone, you just have to…and you do. And yet when I’m done working and I step out into the city, there’s this blast of energy which is wonderful. I love that. And I work well in Maine, I have a studio up there, but it’s a different kind of thing when I leave the studio because there’s the same silence that was in the studio.

We laugh again. It’s so true.

ES: I don’t need to be in a place that’s controlled. That’s interesting, I’ve always been able to write almost anywhere. I can write on a train if I have the energy. I can write at an airport waiting for a plane. If a scene comes to me, I write that down. For the final point of a book I’ve got to be really situated at a big table. I make a huge mess. It’s a very messy operation when I write.

BB: And have you developed a ritual at this point, certain habits that seem to suit your writing, your state of mind?

ES: Yeah, like I’ll write first thing in the morning, I mean as soon as my husband leaves the apartment I’ll write. I’ll write until lunch and I push lunch back as far as I can because there’s something about eating that breaks the energy. And then I might look at it again later in the day or not depending on how I feel it went. It’s always risky (laughs).

BB: Long ago you described yourself as a church hopper. Do you still do that?

ES: No. That’s so interesting. I was doing that when I was writing Abide With Me, I just kept church hopping so much for so many years trying to figure out who that main character was, and I have noticed since I wrote that book I’m not a church hopper anymore.

BB: One thing I’ve always noticed is, despite the fact that your characters are often nearly crippled by emotion, you avoid the sense that we’re reading something sentimental. How do you work that out of your writing?

ES: From the very beginning I thought to myself ‘I do not want to write melodrama,’ and I can remember thinking that years and years ago. So I thought, ‘OK, in order to not write melodrama we have to stay with the truth.’ The emotional truth of life and so sentimentality, to me, is a shortcut to an emotion that’s not fully earned. I’m always making sure that that they’re earning their emotions.

BB: How does a story come to your mind? How does it begin?

ES: Different ways. It almost always starts for me with a person.  Some character. And it could very well be somebody that I saw on the subway and it may be a few years before I realize, ‘Oh wait a minute, I remember that person.’  Some of them arrive very fully formed and some I have to scratch away at to discover who they are. Even just the way the sun is slanting through the bottom of the doorway can provoke an image in me. I just never quite know where they come from…but…they do.

BB: Do you have a file of abandoned stories that you started.

ES: Well I don’t have a file, because I’m not organized enough. I’m a very, very unorganized writer. Let’s just say I have various piles of papers in both New York and Maine.

ES: Yeah. And ever so often I’ll look through a pile and I’ll find some rough draft of something and I’ll think, “Oh I could have worked with that,’ but I didn’t. I hope that my unconscious knows what it’s doing and if it doesn’t make it, it doesn’t make it for a reason.

BB: Did you spent a lot of time in Illinois for your new collection Anything Is Possible?

ES: Yes. And when I realized Lucy Barton was going to come from Illinois, my husband and I made a number of trips out there so that I could really see, very specifically, what the soy beans looked like and corn.

BB: Because that inland isolation, the flat country is so reminiscent in some ways of the rocky barrens of Maine, I thought it was interesting that, once again, even if you’re coming from the Midwest, versus the far coast in the north, you’re still stuck there.

ES: Exactly. You’re still stuck there. When you think about it, we’re all stuck wherever we are anyway, but the sense of being stuck feels. to me, a little more, exaggerated. Although I don’t think the people living in those towns think they’re stuck at all.

BB: What is it about a sparse, spare place that you love? Or hate? You seem to keep returning to that feeling. Even though I know it’s born of your youth in Maine, what is it about that particular environmental sense that is so intriguing.

ES: I love the aspect of point of view so, in a small town as opposed to the city, people think they know each other and they don’t, because we never really know anybody. I like to think of it as taking different slants at people and that’s very interesting to me about small towns.

BB: On a larger scale, what do you worry about in your work? What unsettles you about it?

BB: What is your favorite pleasure?

BB: There’s nothing silly about that. You’re going to hang out with all of us here in Traverse City. It’s an opera house, but we still try to make it like a living room. Anything is possible. 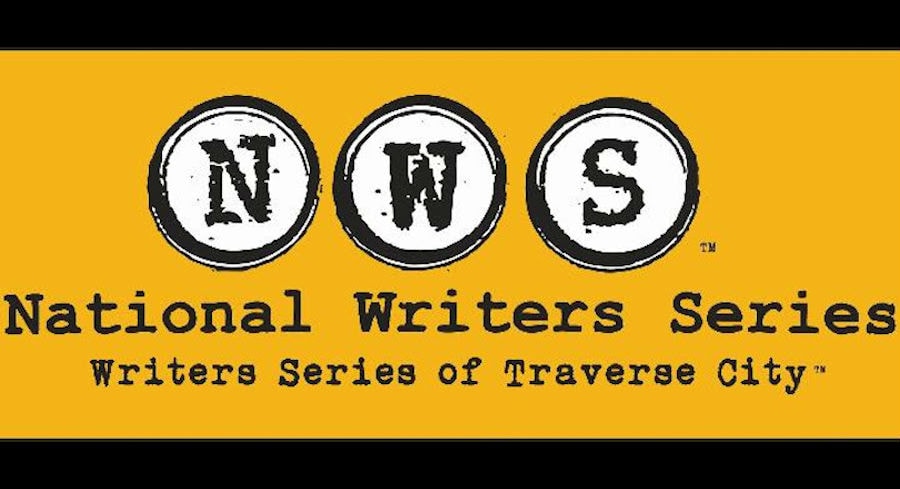 Be a part of the experience. Turn the page and open your mind. Five events remain (including Strout) until the season finale on July 7 with Bruce Cameron, author of A Dog’s Purpose, now a feature film. For a full list go to www.nationalwritersseries.org