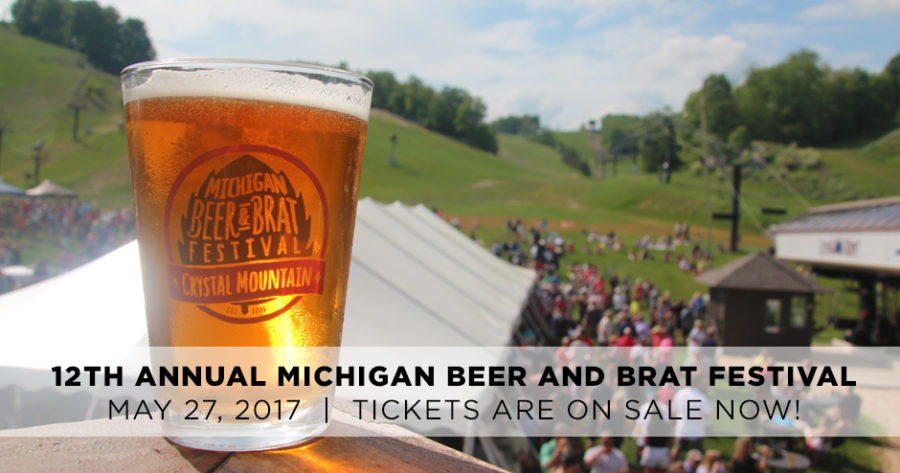 THOMPSONVILLE: As if the Michigan Beer & Brat Festival’s (Saturday, May 27, 4–8 p.m.) 100-plus craft beers from nearly 40 Michigan breweries isn’t enough, Crystal Mountain is adding Micros on MountainTop for Sunday, May 28 (12–4 p.m.) following the North Mitten Half-marathon, 10K and 5K on Memorial Day Weekend.


Saturday, May 27 | VIP hour 3 p.m. & General Admission 4–8 p.m.
What began with just over 100 people as one of the state’s first microbrew fests now attracts thousands to the base of the slopes to sample over 100 Michigan craft beers from nearly 40 breweries, two dozen variety of brats and live music—this year includes Lookin’ Back, the Bob Seger Tribute Band and Scarkazm. Tickets are currently available for purchase online at MyNorthTickets.com. VIP tickets include admission at 3 p.m. (one hour early) along with a glass (9 ounces) and 10 tokens for $60. General admission tickets are currently $30 ($35 day of the event) that include one glass (9 ounces) and 5 tokens. Guests can also book the Michigan Beer & Brats package from $110 per adult, per night with lodging, admission to Saturday’s festival and admission to Sunday’s beer event!

Micros on MountainTop
Sunday, May 28 | 12–4 p.m.
The celebration of Michigan beer moves to the top of the mountain on Sunday from 12–4 p.m. A chairlift ride delivers you to select craft beers, BBQ and live music featuring Refurbushed along with quite a view so have your phone ready. A limited number of tickets are available. Purchase online for $5 until May 26 ($10 day of the event). All of those running in the North Mitten Half-marathon, 10K and 5K also get FREE admission!

North Mitten Half-marathon, 10K & 5K
Sunday, May 28 | 8 a.m.
Runners in the North Mitten have been steadily growing in numbers over the last three years and now Crystal Mountain is adding a 5K. The route, primarily flat (don’t worry, no big climbs up the mountain), along paved and dirt roads, as well as open trails, begins at 8 a.m. Until May 26, half-marathon registration is $75, 10K is $47 and 5K is $42.

In addition to these special events, Memorial Day Weekend also marks the opening weekend of Crystal’s Park at Water’s Edge and the Crystal Coaster Alpine Slide.