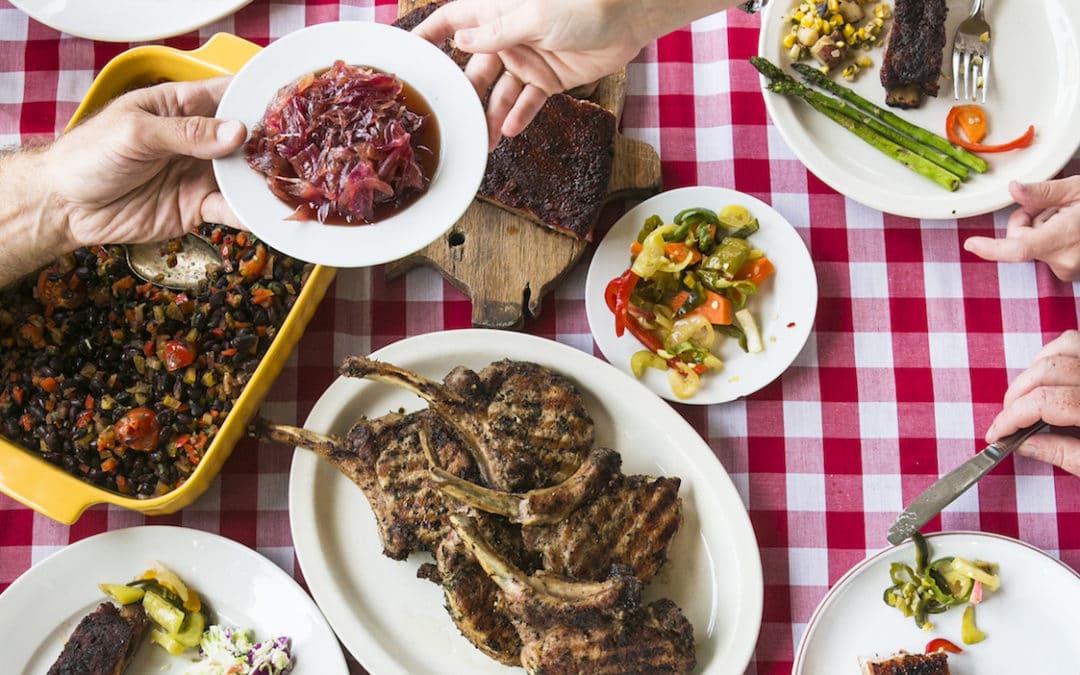 Thanks to Pigs Eatin’ Ribs, a small corner of Northern Michigan’s food scene has edged its way toward the savory succulence of southern-style barbecue. Find the restaurant, owned by barbecue master Adam Kline, in Charlevoix. (Enjoy 5 exclusive and ridiculously delicious Pigs Eatin’ Ribs recipes below!)

Featured in the August 2014 issue of Traverse, Northern Michigan’s Magazine. Get your copy.

The cerulean sparkle of Charlevoix’s Lake Michigan Beach is tame and flat under a hot August afternoon. Families dig their toes in the sugar-fine sand and waxed white yachts languidly cruise the Pine River Channel. Hanging above it all is a thin fog of cherrywood smoke huffed from a huge drum smoker, the late summer air laced with the savory smell of ribs and pork bellies slow-cooking their way toward picnic perfection. While meat soaks up smoke, Adam Kline, pitmaster and proprietor of the food truck and now a restaurant named Pigs Eatin’ Ribs, works inside his jet black mobile kitchen tossing bowls of sweet corn succotash, black bean salad and his coveted blue cheese jalapeno slaw for an afternoon beach feast. 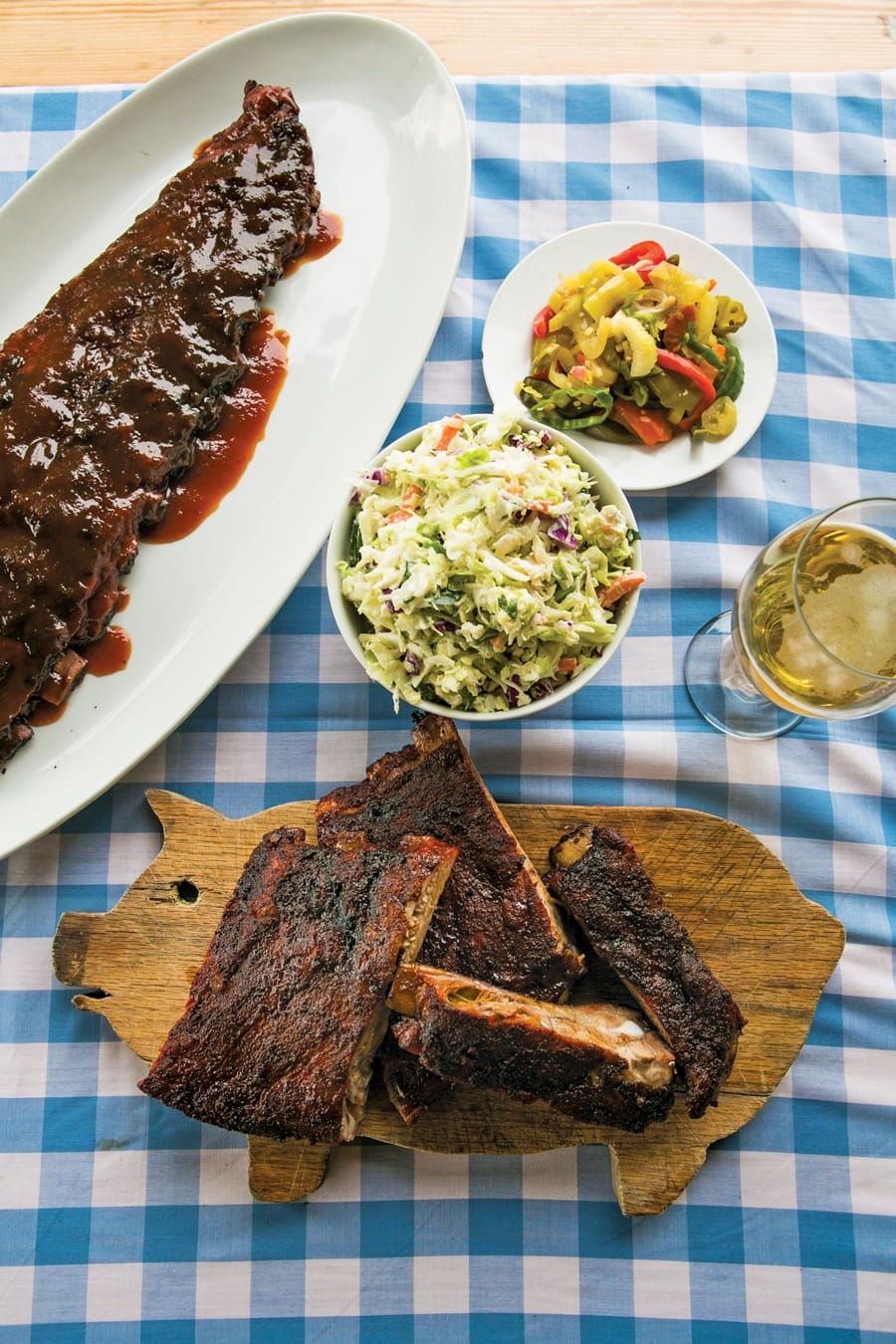 Launched in 2011 with a tow-behind smoker and a converted party bus, Pigs Eatin’ Ribs has been a runaway success, spreading Adam’s slow food/smoked pork gospel around the North with a growing fleet of food trucks, a brick and mortar restaurant in Charlevoix and frenetic catering demand that keeps bridegrooms and business groups gnawing on smoky bones for nine months of the year. With high summer upon us and local farms flush with fat pigs, ripe corn and juicy heirloom tomatoes, we follow Adam, the North’s pied piper of pork, to get an angle on his tasty enterprise and learn expert tips to up our own backyard barbecue game.

A native son of Charlevoix the Beautiful, Adam took to kitchens straight out of high school in 2000, when he apprenticed under Chef Garrett Scanlan at the Charlevoix Country Club and helped him launch Garrett’s One Water Street in Boyne City where Cafe Santé now stands. Adam was bitten by the barbecue bug while living and working the food scene in Charleston, South Carolina, Dixie’s ground zero for old school whole hog barbecue and tangy vinegar-based sauces. “I rigged up a basic grill and smoker set-up in our backyard and just played with pork on my days off,” Adam recalls of his amateur pit days spent perfecting spice rubs and homemade sauces. Following the birth of their second child, Adam and wife, Jill, decided to move the family back to Charlevoix and fill the Northern vacuum with legit Southern barbecue.

Buying a trailerable off-set smoker built by Adam’s high school pal T.J. Christiansen and his Ludington Public Schools metal shop students, Adam made his first foray into Michigan’s competitive barbecue circuit at Silver Lake under the flag “Pigs Eatin’ Ribs” and swept first place for ribs and third place for chicken. His success in the competition pits spun into a business plan to build a food truck and feed the Mitten’s masses on St. Louis cut ribs, pulled pork sandwiches and tangy, scratch-made slaws at small town festivals and music venues around the North. “I began knocking on doors and promising great barbecue until somebody gave me a shot,” Adam says between bites of chipotle pork belly. 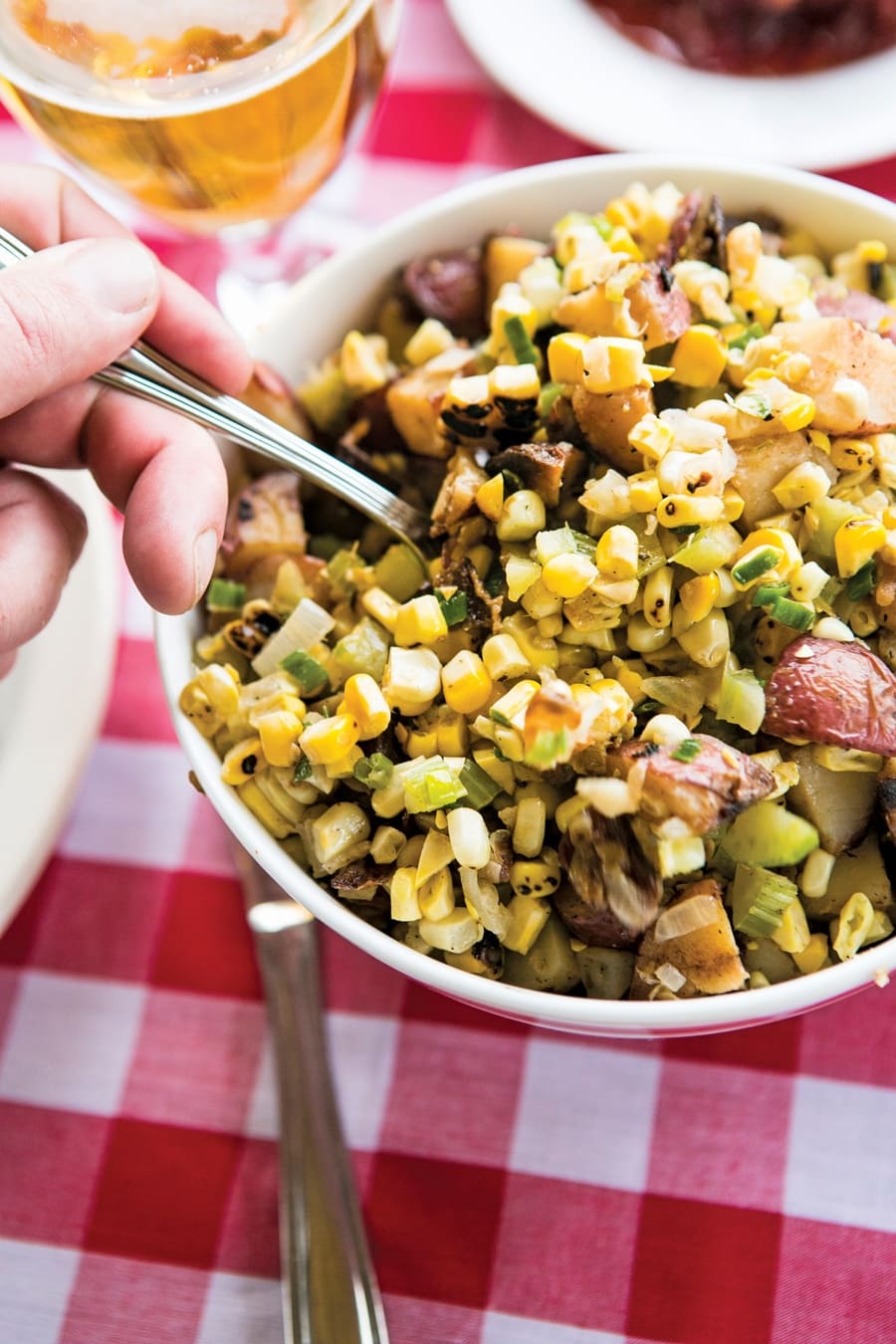 Pigs Eatin’ Ribs got its shot at the 2011 Charlevoix Area Trout Tournament where hordes of hungry fishermen ate Adam’s ribs as fast as he could pull them from the pit smoker. A little over a month later Adam was dishing to long lines at the Charlevoix Venetian Festival and feeding hardwood sticks into his smoker every two hours around the clock to crank out scores of rib racks and 10-pound pork shoulders. A viral love for Adam’s smoky, slow-cooked vittles quickly spread across the North, empowering a custom business that began with backyard pig roasts and has morphed into full-fledged commercial catering with china, linens and piles of pulled pork and smoked brisket capable of feeding hundreds.

“Backyard barbecue, black tie barbecue, our mobile units can go anywhere and we’re running up to six separate events on any given Saturday throughout the spring and summer,” Adam happily reflects. In 2013 Pigs Eatin’ Ribs added a large stationary food truck with a commercial grade smoker to The Little Fleet lot in Traverse City and simultaneously opened a small takeout restaurant with a picnic patio on the south side of Charlevoix that acts as a hub for the company’s catering operations and fleet of mobile barbecue units.

Essential to all this success, Adam concedes, is the tireless support of his wife, Jill, who works as a full-time accountant, manages his company’s finances and raises their three children. Essential, too, the intrinsic deliciousness of the humble pig. “Nose to tail, it’s the most versatile piece of protein a cook can get his hands on,” says Adam of his company’s eponymous mascot. Pork, as Adam and a great many American chefs will agree, is a thoroughly democratic meat. “It’s an inexpensive product that time and technique can turn into the highest possible quality.” 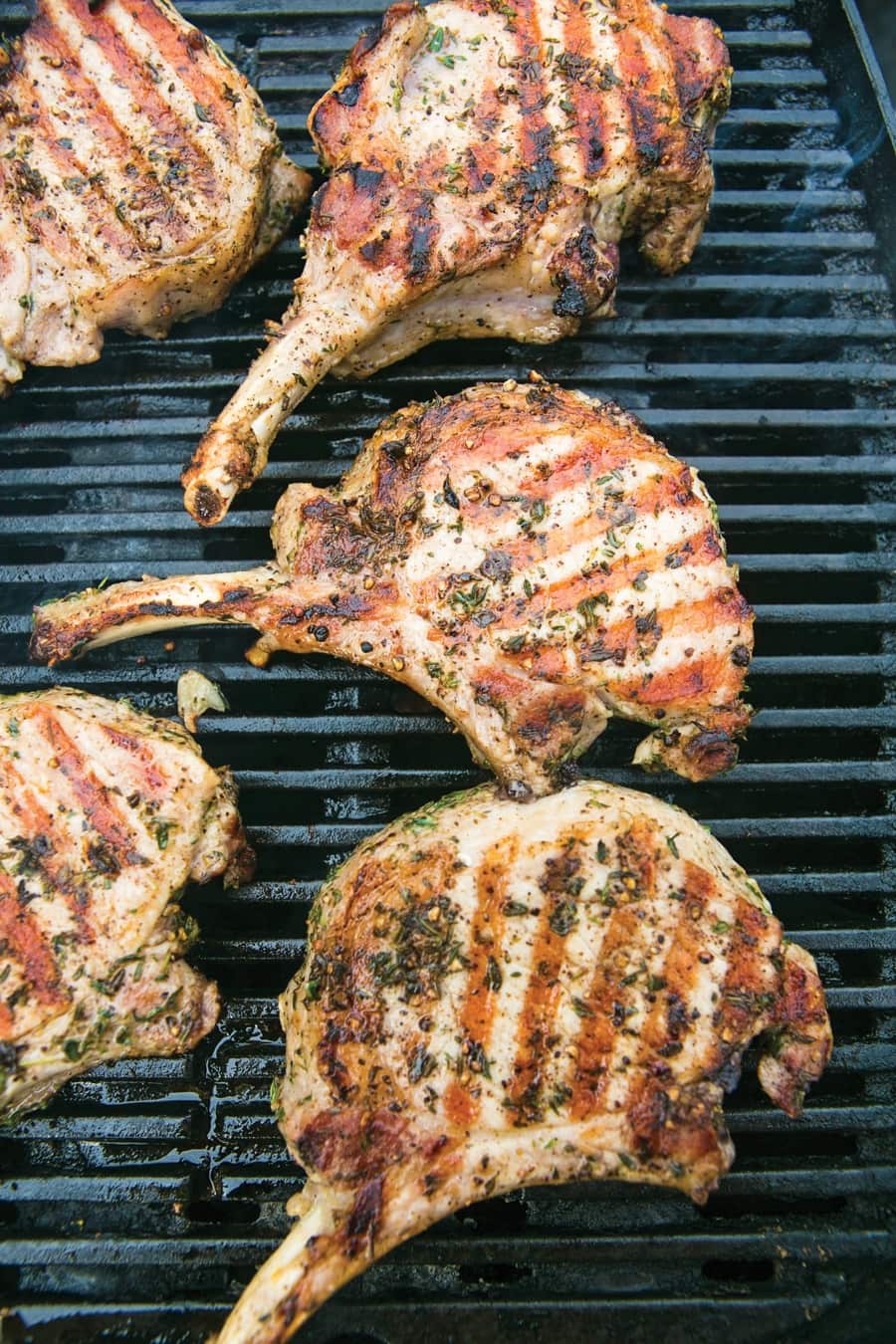 The highest possible quality is evident in the pink smoke ring that goes from skin to bone on the meltingly tender ribs Adam pulls from the pit and deftly portions with a razor-sharp cleaver on a pig-shaped cutting board. The secret to great barbecue, he reveals, is time and temperature control. “Low and slow,” is the mantra of Adam and every great pit master. “Ribs supply a relatively thin layer of meat on each side of the bone, so they need between four and six hours in the smoker at 225 degrees to become tender, whereas a pork shoulder, which is a big active muscle with more fat, needs about 14 hours.”

Whether using an off-set smoker, called a “stick burner” by barbecue pros, or a pan of smoking chips on a traditional charcoal grill, Adam favors fruit woods like cherry, apple or lilac because of their sweet, mellow flavor. He cautions backyard neophytes about using exclusively hardwood chunk charcoal and to go easy on stronger woods. “Processed charcoal briquets can give your food a chemical flavor, and too much hickory or mesquite will overpower the flavor of the meat.”

Before moving on, Adam sums up, re-emphasizes, underscores: Keep the fire under control, ensure a slow steady burn and produce a savory penetrating smoke. Got it. 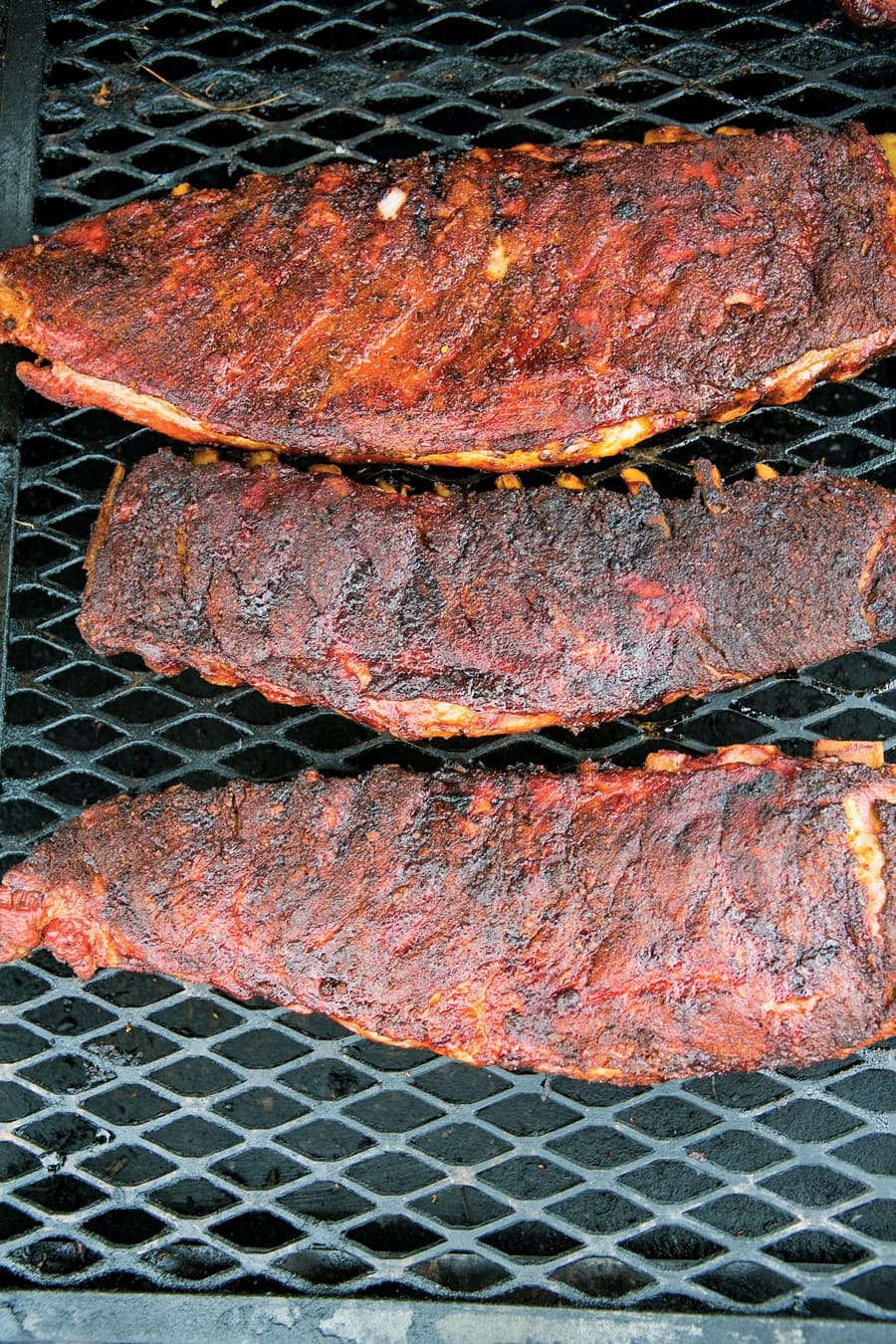 Adam then turns his eye to the all-important rub. This sweet, salty, savory, spicy seasoning cocktail gets massaged into the pig flesh to caramelize and crisp the outer layer of meat. Kline likes to build every rub with coarsely ground kosher salt and fresh black pepper, “Get yourself an inexpensive coffee grinder and turn it into a spice grinder,” he says. “Freshly grinding whole spices will work the oils out and add a lot more flavor to the final product.” Beyond the elemental s&p, Adam adds onion powder, garlic powder, ground mustard powder, paprika, ground chipotle and a little brown sugar. “Pork has naturally a lot less sugar than beef,” Adam explains, “so you need to add sugar to a pork rub to draw up the juices and help the surface of the meat caramelize.”

With your porcine prize rubbed, wrapped and rested overnight then smoked low and slow until tender, there’s one final, elemental step to take before pork passes lips: sauce. Throughout the American barbecue belt there are infinite iterations of sauce to slather on pit-smoked pork ranging from straight white vinegar to spicy mustard to thick, sweet tomato and molasses-based glop. Adam loves them all so much he had to hybridize. “What I call our ‘mother sauce,’ which is Pigs Eatin’ Ribs’ basic barbecue sauce and the building block for our specialty sauces like mango habanero, chipotle and blueberry, has a little bit of everything: vinegar for tang, sugar for sweetness, a little heat and a little ketchup. That’s great on everything, but especially ribs and chicken. To cut through the fattiness of pulled pork I like our Carolina-que, which is a thin, sweet vinegar-based sauce with a little touch of red.” When asked what to drink with all these dynamic flavors, the answer is simple: cold beer.

Amid the wreckage of this August beach barbecue: chewed bones, charred corn husks and empty beer cans still beaded from the ice chest, Adam Kline is one happy man. “Barbecue brings people together,” he says, cracking a wide smile and winking at wife Jill. “When I came home and said I was going to buy an old party bus and drive around selling ribs on the street she told told me to go for it and here we are.” Right now, Kline’s here, relaxing and looking out at placid Lake Michigan; tomorrow he has 25 employees to manage, four weddings to cater and a thousand pounds of pork to cook in a delicate balance of low and slow meets fast and furious. 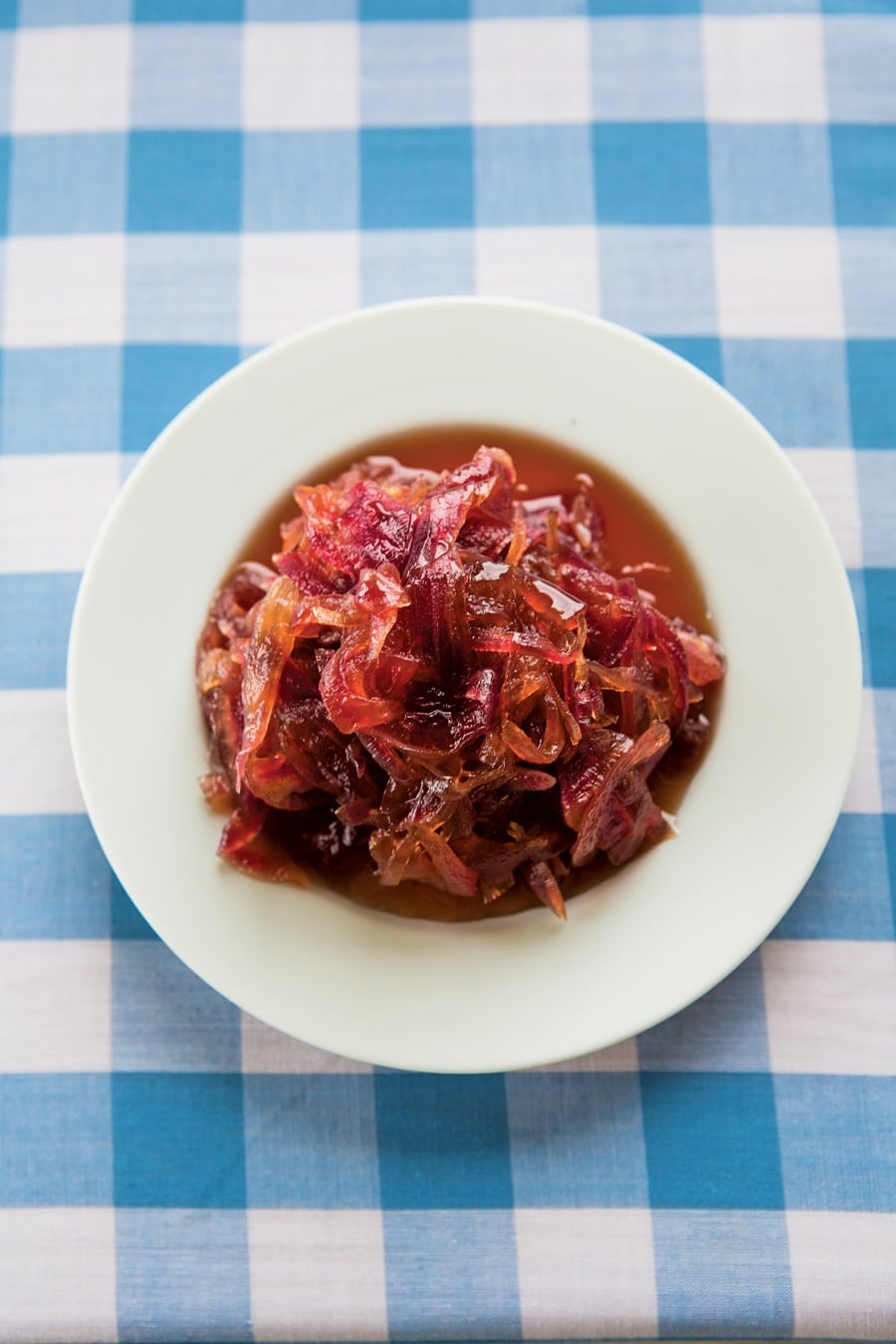 How To Cook Amazing Barbecue

Pork Butt
Actually the pig’s front shoulder, this big muscle is loaded with fat, flavor and connective tissue that requires a long, slow tenure in the smoke box. Liberally coat with rub and cook butts for 12 to 14 hours at 225˚ until they can be easily pulled apart.

Ribs
For maximum flavor penetration coat your rib racks with rub the night before, wrap them in plastic and refrigerate. Smoke at 225˚ for 4 to 6 hours until tender. Slather with sauce. Eat gleefully.

Pork Belly
The mother of bacon, this big cut has thin layers of succulent meat sandwiched between rich layers of fat. Rub ’em down, cook ’em slow for six to eight hours at 225˚ to an internal temp of 160˚, cut into portion sizes and then crisp each side quickly on a hot grill.