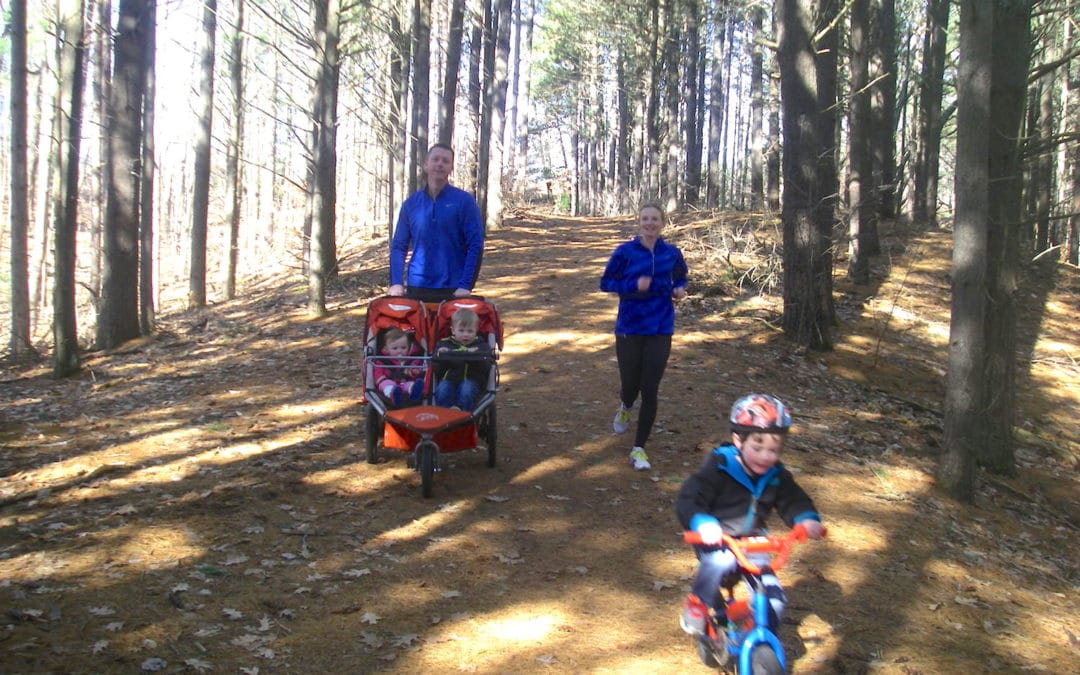 How running and exercise are helping Traverse area pregnant moms.

While seven months pregnant, Jessica Stark, 33 of Kingsley, pushed her daughter, Ally, 4 years old, in a stroller in the recent Leapin’ Leprechaun 5K in Traverse City! Is Jessica crazy or “crazy smart” running pregnant? Jessica, a recreational therapist at Lighthouse Rehabilitation Center in Kingsley, is not new to running. “I ran track and cross-country at Harrisburg High School,” she says. “I was first team all-conference in both. I formally started running in middle school track. My husband, Chris, was in track in high school but only threw discus. He was about 50 pounds heavier then. He started running five years ago as a way to cope with his PTSD, caused by being a first responder in the past. Chris has become faster each year and places in most local races.” Jessica’s son, Eric, is a speedy 6-year-old who enjoys the races and probably has his share of medals. The family that runs together, has fun together.

Jessica adds the following about the benefits of running pregnant: “My doctor said I’m cleared to do my usual physical activity as long as it feels okay. In addition, it physically helps my hips feel better and mentally lifts my mood. I also feel running is helpful for making a smoother delivery when a person remains active for as much of their pregnancy as possible. I want to show my daughter, too, that just because someone is pregnant, it doesn’t mean you have to stop everything. It is a pet peeve of mine when others think you should be at home sitting down for nine months. I might be slow right now, but it beats sitting on the couch.” 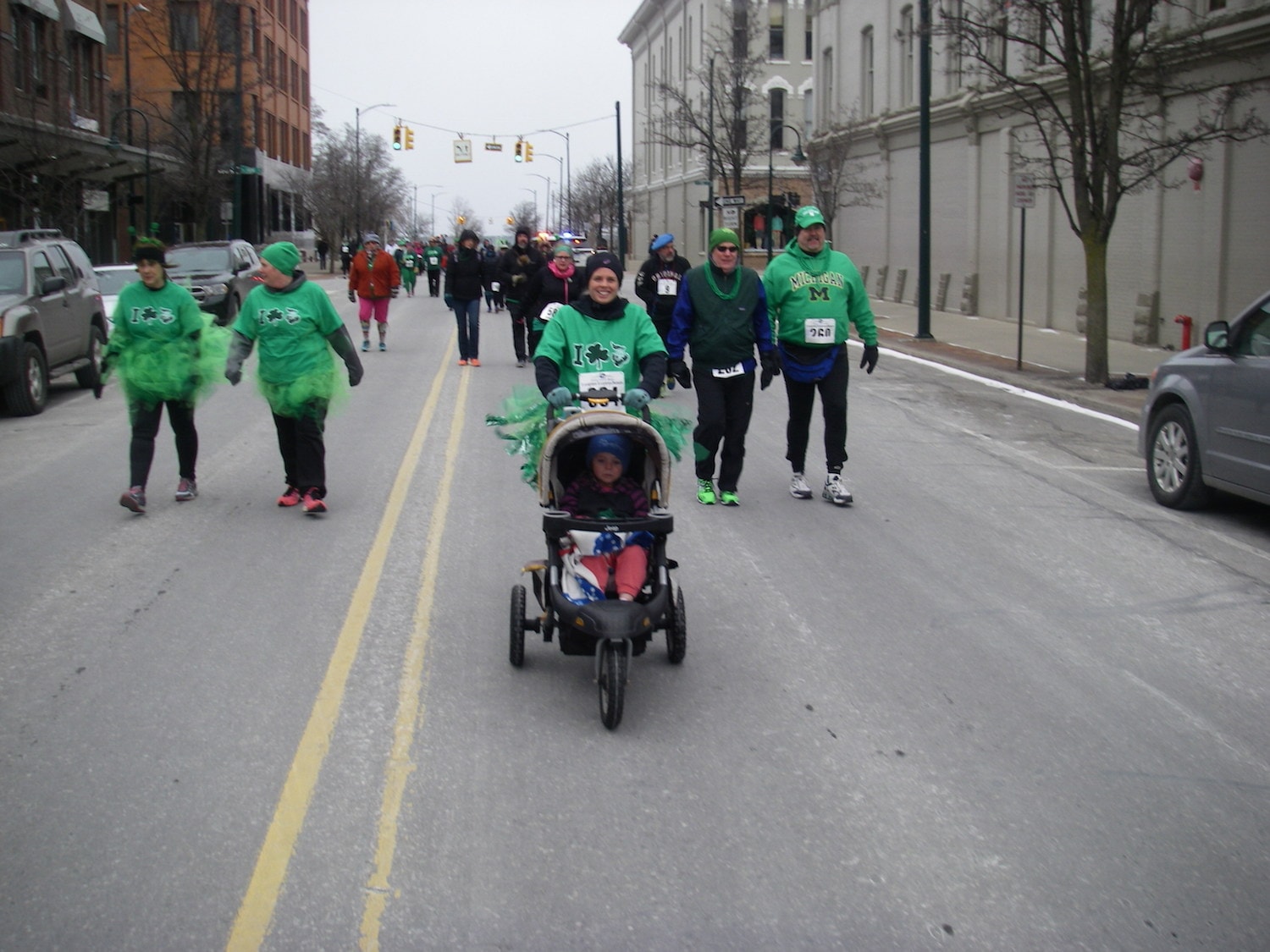 Jessica Stark, 33, and daughter Ally, 4, take on the challenge of the Leapin’ Leprechaun Race.

Rebecca Noffke is also running pregnant, at six-plus months! She spoke with her doctor early on, about running. He said she could do what is comfortable and to listen to her body. Rebecca stopped running between week 5 and 17 due to pregnancy nausea and fatigue and winter conditions for safety. “I ran a whole 5K race in February at 19 weeks. And then ran most of the Leapin’ Leprechaun with a few short walking breaks at 22 weeks. The further in pregnancy the more walking I need to do due to the weight of baby in the abdomen area,” she says.

Rebecca’s family likes to walk 5K’s and she calls her family her “biggest supporters.” Rebecca’s 4-year-old son likes to run with her for short distances in the neighborhood, 5K’s with the stroller and fun runs. She ran her first 5K at the Cherry Festival in 2010. After that she was hooked.

In 2011, Rebecca and her mom, who lives in Grand Rapids, set out to do one 5K a month together. “I did 16 that year from April to December. I had my son in 2012. After that I got back into running one or two races a month, for the next few years,” she says.

Rebecca took a break due to pregnancy symptoms and possible early-on complications from November–January 2017, but then did one race in February and one in March of 2017. “Running has given me time for myself, to help process situations and work through stress. Also, to be able to set goals and push myself to accomplish them,” Rebecca says. Being a pregnant mom and running, she has had to adjust and listen to what is comfortable for her body and she hasn’t done as much as she has in the past but running has helped her do things she I loves to do and be around other runners. “It has kept me motivated to keep exercising,” she says. 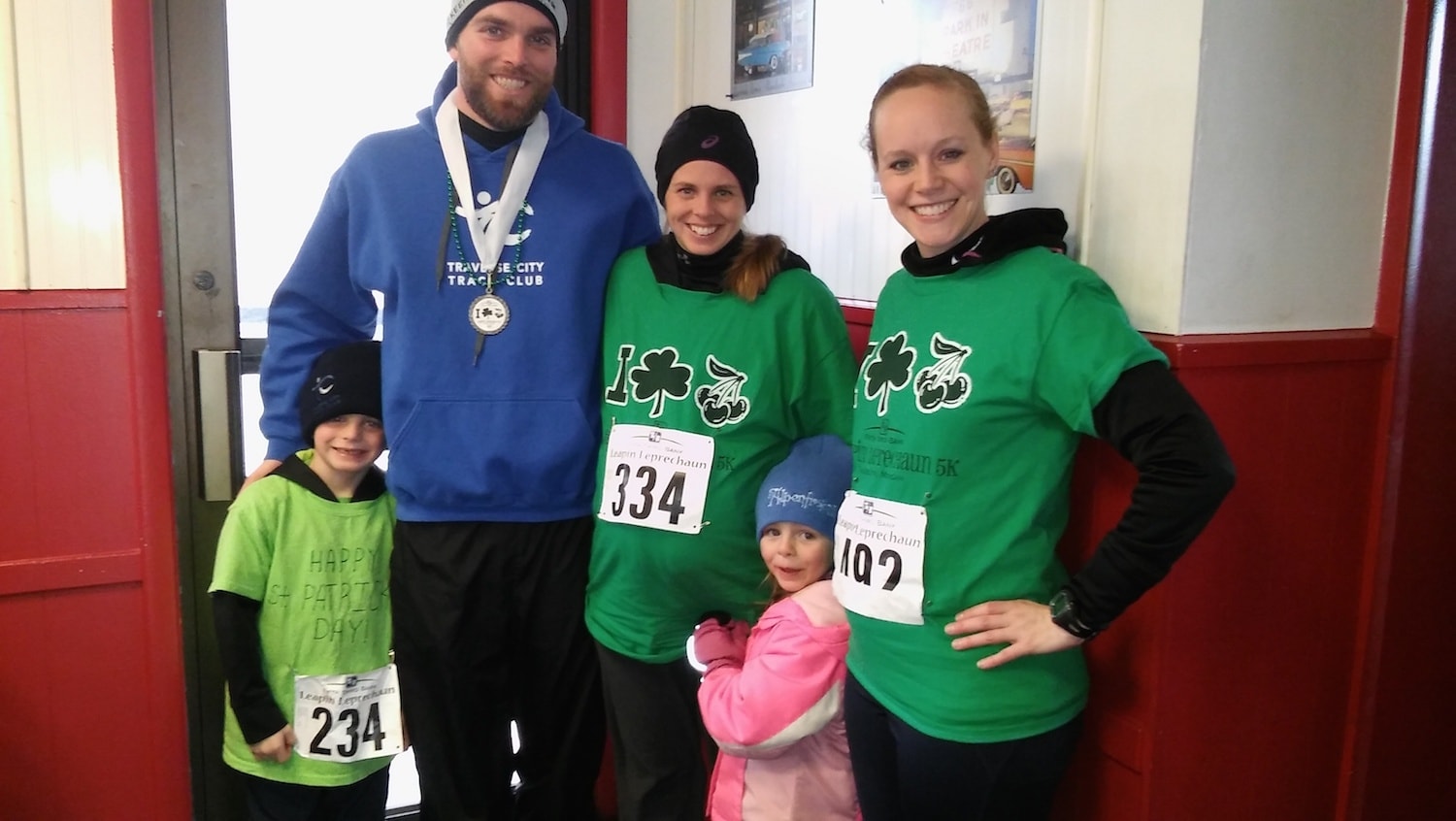 From left: Eric, Chris, Jessica, and Ally Stark with Rebecca Noffke at the finish of the March 2017 Leapin’ Leprechaun Race, Traverse City.

Alissa O’Hagan, M.D. (Board Certified Obstetrician/Gynecologist), moved to the Traverse City area three years ago, with her husband, Tom, a board certified orthopedic surgeon. Both did their residencies at the University of Chicago. Their children are Kellan (boy, age 4), Connor (boy, age 2.5) and Skylar (girl, age 1).

I asked Alissa about her philosophy of running pregnant. As a physician in obstetrics and gynecology, this topic often comes up in her work and it allows her to combine her passion for running with taking care of women in pregnancy. “There has been more consistent data that exercise in general can be advantageous during pregnancy to help reduce certain health problems, as well as help with delivery and the recovery,” she says. ACOG (American College of Obstetrics and Gynecology) recommends that pregnant women engage in 30 minutes of moderate-intensity exercise on most days of the week. Women should, of course, discuss with their doctors to make sure there are no unique medical or pregnancy issues that would preclude this recommendation. “Women in pregnancy, like all runners, should take care to stay hydrated and monitor risk for overheating while running,” she says. 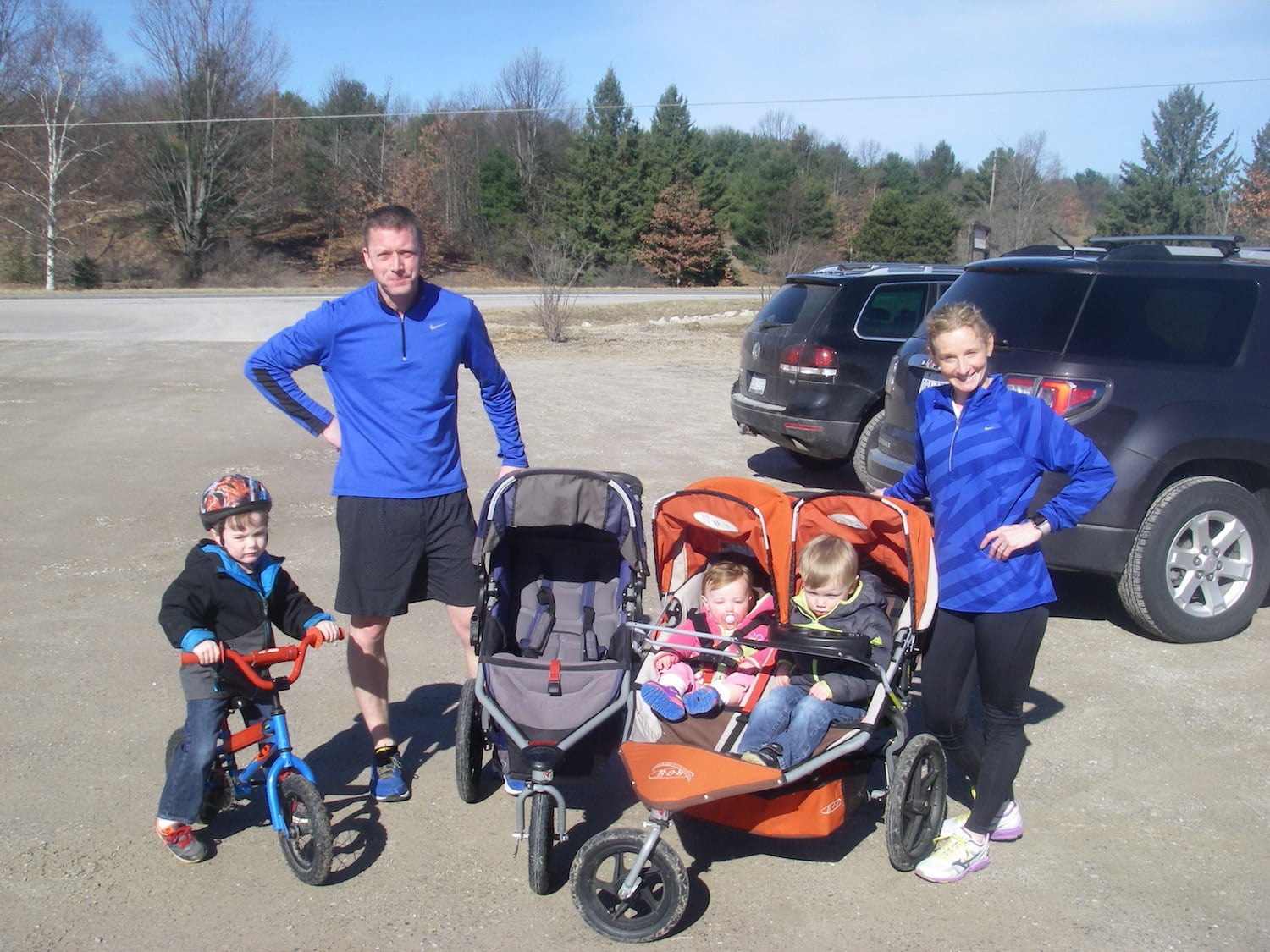 The O’Hagan family ready to run.

Alissa has her own history of running and pregnancy. “I had just finished my eighth marathon when I got pregnant with our first,” she says. She was fortunate to feel well enough to run throughout all of her pregnancies—especially remarkable, considering she had three babies in three years. “By my third baby, I was running a little slower, but I was still going. I was able to run on the actual day that I had all of my babies,” she says.

Alissa played sports her entire life and loved being active, loved being part of a team and loved competing. She played basketball in college, and as soon as that was done she transitioned to running more consistently. She has also done a significant number of triathlons. “During my first year of medical school, I trained for my first marathon. I found that running became my outlet and allows me to relieve stress and regain energy,” she says.

Alissa loves hitting the pavement or the trail to relax, think about nothing or do her problem solving. She considers herself fortunate to run eight marathons and countless half-marathons and other distances. She and her husband are both doing the Bayshore Half-Marathon, and each of them tries to do at least one half-marathon a year. Now that their kids are a little older, they will try to start doing more triathlons.

“A jogging stroller was the most important purchase we made prior to having our first,” Alissa says. “I put a lot of miles on my single jogging stroller during my maternity leave and beyond. As soon as I was pregnant with our second, I got the double jogging stroller.” After their third child was born, running with the kiddos involved both Alissa and her husband pushing a stroller or their older son on a bike. “From a personal and medical perspective, I think it’s important for people to just be active. It can be traditional like running, biking, swimming, or can be unique such as hiking, kayaking or yard-work. It’s good for your body and good for your soul,” she says.

Do you have a “Pea in a Pod”? Expecting or thinking about expecting? Try exercise or better yet, keep running, don’t stop. (Remember to get permission to exercise from your doctor!) These moms all agree, running helps make pregnancy and delivery easier, and you’ll feel better for the effort.

Mickey Fivenson is the former director of the National Cherry Festival Races. His sons, Zack and Adam, both started running as “Peas in a Pod.” As young adults, they both are still running. If you’d like tips on running, if you have a story to share how running has impacted your life, or if you would like coverage of your race, contact Mickey through the editor.