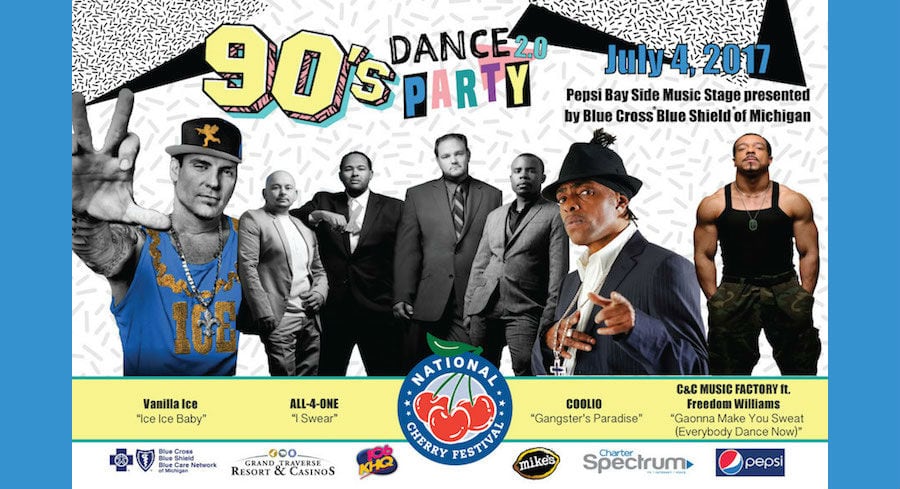 Just confirmed by National Cherry Festival officials, Shinedown will perform on the Pepsi Bay Side Music Stage presented by Blue Cross Blue Shield of Michigan on Monday, July 3 while the 90’s Dance Party 2.0 featuring Vanilla Ice returns Tuesday, July 4. Music on July 3 is sponsored by Leinenkugel and on July 4 by Mike’s Hard Lemonade. 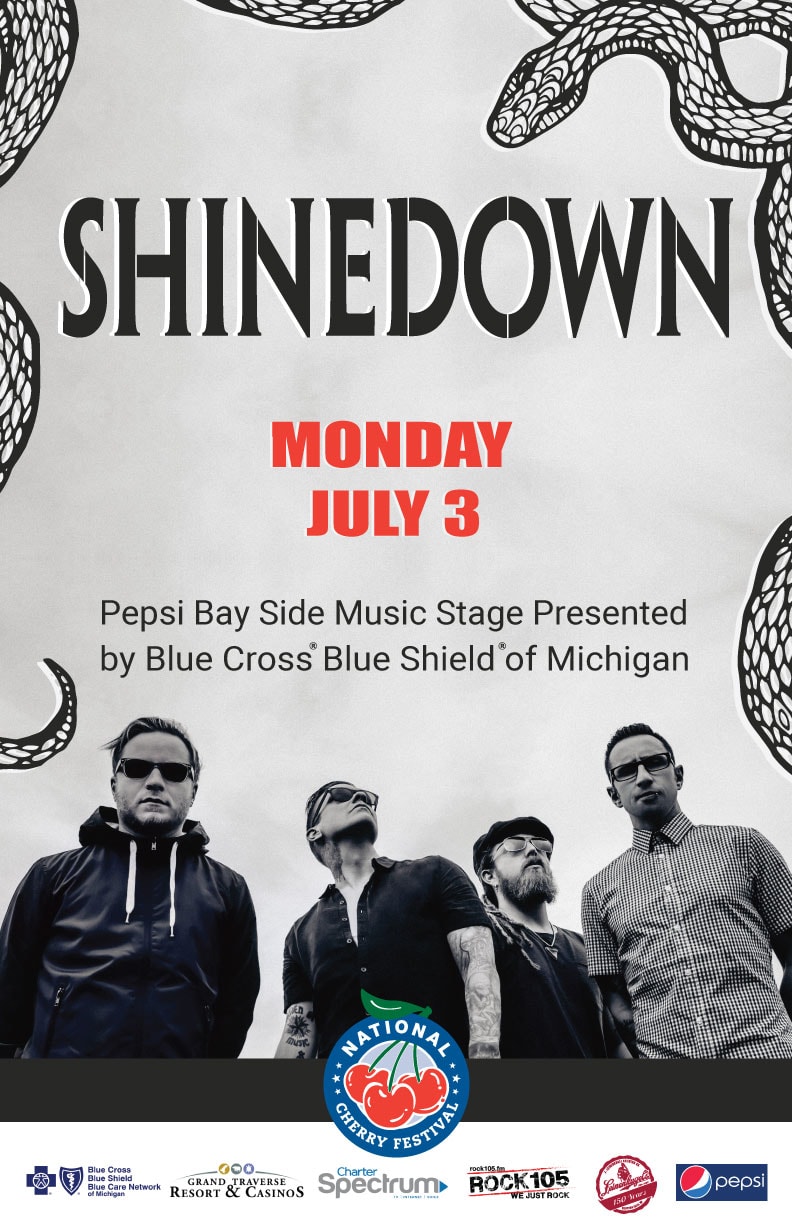 Shinedown:
Shinedown has had 22 Top 10 singles of which 11 were #1 singles. In fact, every album the band has released turned gold or platinum. The band has built their name on rock songs both brutal in power and epic in scope.

Now, with their latest album, Shinedown (Brent Smith, Barry Kerch, Eric Bass, and Zach Myers) veers away from that densely layered sonic palette and takes a more direct approach. Featuring lead single “Cut the Cord”—a blistering track that shot to #1 on Active Rock radio—Threat to Survival finds the multi-platinum-selling band achieving their most powerful sound ever and offering up their most important album to date. As Smith explains, Shinedown’s approach on Threat to Survival had much to do with the emotionally raw material at the heart of the album. “When we started the writing process we realized the changes that had taken place over the past 2 years—our experiences, the relationships that had come and gone—the album really took on a life of its own,” he says.

In forming the emotional core of the album, Shinedown delved into many of the most thorny issues facing the band members in recent years, such as Smith navigating his role as a father. “There’s not any song that’s directly about my son, but as we were writing I was asking myself a lot of questions about what it means to be a good father,” he says. “It forced me to look at who I am as a person and what’s really important to me at this point in my life.” In both the writing process and in the final product, that unflinching self-examination proved sometimes devastating but ultimately life-affirming. “I always say that I write songs because it’s therapy, and that very much held true on the writing of this album,” Smith notes.

Throughout Threat to Survival, Shinedown explores matters of life and death and beauty and pain with a fierce energy and indomitable spirit. On “Cut the Cord”—a song that continues a record-setting streak in which each of the 19 singles released over Shinedown’s career has climbed to the upper regions of the radio charts—the band looks at the insidious nature of self-destruction and puts out a call for self-empowerment. “Some people might listen to ‘Cut the Cord’ and think it’s about drug addiction,” says Smith, pointing to one of the song’s most piercing lyrics (“’Cause agony breeds no reward for one more hit and one last score”). “But really it’s about anything that might wrap itself around you and keep you from becoming the person you truly want to be.” Produced by Shinedown’s own Eric Bass, “Cut the Cord” fuses Smith’s growling vocal work with thunderous drumming and lead-heavy guitar riffs, weaving in spooky, choirlike background vocals to thrilling effect.

Shinedown continually brings both staggering musicality and a powerful emotional complexity to their music. “There’s always been a certain level of positivity with Shinedown—that’s even where our name came from,” says Smith. “There’s a sense that everything that’s bad has a little bit of good to it, just like everything that’s good has a little bit of bad. The songs on this album address the reality that we’re all going to die at some point and that sometimes the willingness to survive is all you have. It’s about holding onto that sheer will to live, and getting through whatever might come your way because the legacy that you leave behind is what will carry you on to your next journey.”

’90s Dance Party 2.0
Vanilla Ice, All-4-One, Coolio and C&C Music Factory featuring Freedom Williams
The iconic Robert Van Winkle, aka Vanilla Ice, exploded on the Rap/Pop music scene in 1990/91 selling 10 million albums in 4 months and hitting number one on the Billboard charts with the number one single “Ice Ice Baby” and number one album positions. His worldwide album sales are over 15 million and individual songs total over 160 million and are still selling. Vanilla Ice won 2 MTV Awards, a People’s Choice Award, and was nominated for a Grammy. Vanilla Ice has starred or appeared in the movies Teenage Mutant Ninja Turtles 2, Cool As Ice, The Helix Loaded, The New Guy, The Bros, Big Money Hustlas, That’s My Boy and coming soon – Ridiculous Six with Adam Sandler. His TV credits include Celebrity Boxing, Hollywood Squares, The Farm-UK, Surreal Life, Celebrity Bull Riding, Dancing On Ice 6, Canada Sings Seasons 1&2, and the DIY shows — The Vanilla Ice Project Seasons 1,2, 3, 4 & 5,  three episodes of  Ice My House, and series Vanilla Ice Goes Amish 1 & 2.  Vanilla Ice performed pantomime live on Stage as Captain Hook in Peter Pan in the UK as well as doing a 20-city Dancing On Ice skating tour. His latest TV appearances include guest spots on ABC – The View, Good Morning America, Good Afternoon America, The Today Show and The Late Night Show. Vanilla Ice has had great success in real estate and has launched VanillaIceRealEstate.com with mentoring courses in real estate investments as well as upcoming live seminars around the US. His current TV show The Vanilla Ice Project on DIY won The Factual Award for the Best Home TV Show.  Vanilla Ice has toured consistently throughout his career since 1990 performing all over the world.

EVERYBODY DANCE NOW … With over 8 million units sold, it was and still is today, the song heard round the world! As the front man and co-founder of the international multi-platinum selling group C and C Music Factory, Freedom Williams has traveled and performed around the world extensively and has yet to meet a crowd that he couldn’t captivate. His performing abilities are just one of the things that keep the crowds mesmerized. Freedom was born in Bedford Stuyvesant in Brooklyn, New York and raised in Queens, New York which is where it all began. Queens, New York has been the home to some of the greatest rappers and entertainers to ever grace a stage.

Coolio initially took over the world rap scene through the “Gangsta’s Paradise” release, which won a Grammy in 1996 for Best Rap Performance, Solo. “Gangsta’s Paradise” would also be featured on the Dangerous Minds soundtrack and movie. “Gangsta’s Paradise,” also featuring L.V. on vocals, was also nominated for a Grammy for Best Song of the Year. It sold over six million copies and was Billboard Magazine’s number one single in 1995. The world’s recognition led to his music being featured for several major motion pictures. Coolio successfully made the transition from performer to actor during the 90s.

Tickets for both shows Shinedown and 90’s Dance Party 2.0 go on sale Friday, April 21 at 9 a.m. and are priced accordingly:

Also available is the Festival’s VIP Deck Experience: The Deck Package presented by Wild Turkey Bourbon, is THE VIP concert experience. The Deck Package includes a general admission ticket and access to The Deck presented by Wild Turkey Bourbon. Guests will be able to lounge on The Deck while enjoying two complimentary adult beverages and listening to the sounds from the Bay Side Music Stage. Relish in a full buffet-style meal themed around that night’s entertainment. Never leave your seat, as our volunteers will be around to check on you while you enjoy the National Cherry Festival’s Entertainment on the Pepsi Bay Side Music Stage presented by Blue Cross Blue Shield of Michigan. The limited number of VIP Deck Packages are just $100. Tickets are available by visiting www.cherryfestival.org or by calling 1-888-695-0888.