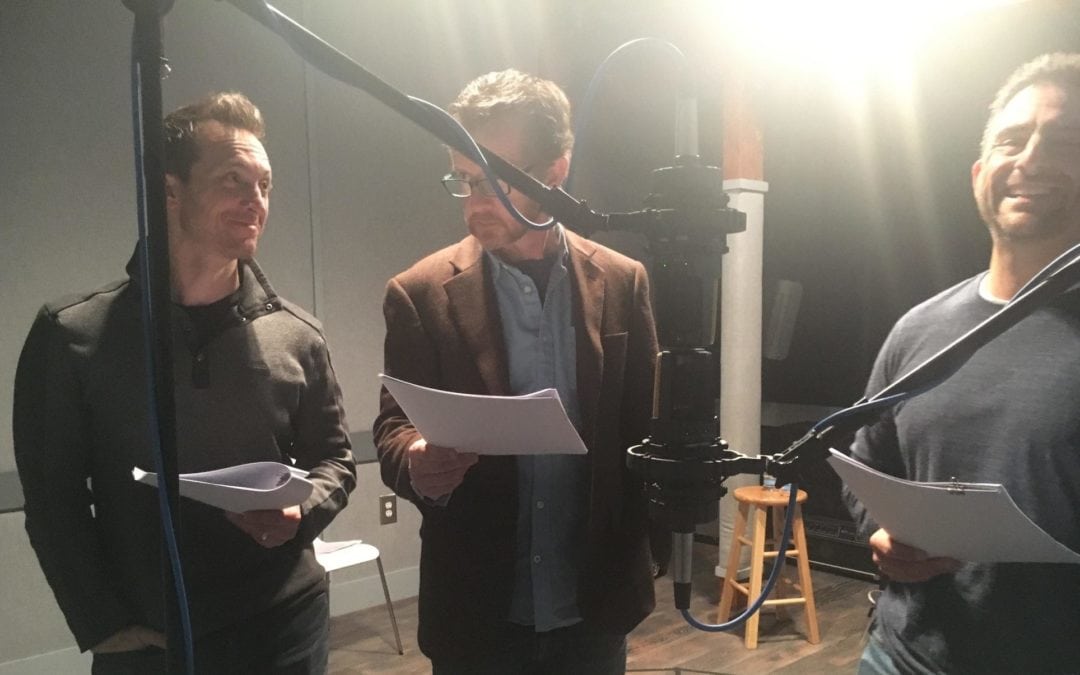 We catch up with veteran film producer, and now podcast producer and director, Rebecca Reynolds of Leland, who, along with her husband and co-producer Jim Carpenter, recently wrapped up the first season of the podcast Hollywood & Crime. Picked up by major podcast network Wondery, the show has risen quickly in what’s become a very crowded and competitive podcast field.

So, for podcast newbies among us, can you take a second to explain what a podcast actually is?


Sure. A podcast is an audio or video show that you play on your smartphone or tablet or computer, the beauty being that you can play it whenever it works for you—you don’t have to be by a radio or TV at a specific time to catch a broadcast. Also, key point, podcasts are free, like free radio or television shows. They are paid for by sponsors. So when you see that “subscribe” button, don’t worry. It doesn’t mean you will be asked for your credit card. One thing I love about podcasts is you can play them through your car stereo, so they make for awesome listening on road trips.

OK, so your podcast is called Hollywood & Crime. Where did the idea come from?
I was working on a project in L.A. with my friend Jon Ponder, and Jon was telling me, “I have all these great Hollywood crime stories. He loves Hollywood history up till 1950, when the legendary club Garden of Allah closed. So we started spit-balling ideas and we came up with the premise about the Black Dahlia, which is the most infamous unsolved murder case in L.A. history.

How were you able to turn this one murder into a podcast series?
The thing is there were other similar murders and some mysterious disappearances in the city around that time, ranging from 1943 to 1949, and this was a time when the term “serial killer” didn’t even exist. So we investigate other murders, too.

So detectives might not have been connecting these cases …
Right. So a premise of the show is are they connected? Is it a serial killer? Copycat killers? Lone wolves?

Are the podcasts staying true to the facts?
We are doing tons of research for each episode. Poring through old newspapers from the day. You have to understand, there were six daily newspapers in L.A. during that time, and each one had its own version of the stories. In addition, we were able to bring some new evidence into it using modern research techniques, like computer searches of steamship records. The Black Dahlia case was the first case in the United States where fingerprint records were telecommunicated, for the investigation.

Did you ever consider a TV show?
At first we thought maybe a TV show, but we liked the whole radio idea. We could just hear the police calls over the radio, hear the detectives at the crime scene, discussing in quiet voices.

In listening to the show, one thing that becomes immediately clear is that the quality of the production is significantly greater than most podcasts. Tell us about that.
The benefit of being with the Wondery network is that we’re able to produce the shows at a higher caliber than if we did it on our own, so we have a professional cast of actors—union actors—who are performing on the show and doing the technical work.

Tracy Pattin is our lead voice. One of the reviews for the show says, “She has the voice of golden age Hollywood.” We produce the show like old time radio. Jon and I direct, and we cast the actors. And we have the actors in the room together, so they are not recording separately. We really like what that brings to the recording.

How do we listen?
Just search with Google or your favorite podcast app for “Hollywood & Crime podcast.” The good news is all of the episodes from season one are on the site now, so you can binge listen! (Or just click Hollywood & Crime.)

More on the Entertainment Scene: