No wonder the City of Traverse City has officially designated our town as Book City. Tom Brokaw, Lee Child, Janet Evanovich and Gillian Flynn are just a few of the world-renowned authors who have come to visit Traverse City through the National Writers Series. David Ebershoff was here just weeks before his book turned film, The Danish Girl, won an Academy Award for Best Supporting Actress (Alicia Vikander) And by popular demand, he returns as guest host on June 25.

So what is NWS? The National Writers Series gives authors a unique experience on their book tours unlike their LA or New York schlep around. After Doug Stanton, co-founder of NWS, returned from an exhausting book tour he decided to create a program that would foster interactive conversations with the audience and give them a behind-the-scenes look at how the writing magic is made. The great experience and enthusiastic crowd encourage visiting authors to tell their writer friends about this gem named Traverse City, and in October of 2016 the legendary Margaret Atwood showed up to celebrate the 100th author event.

Never been to an event? Forget the idea of an awkward book signing in a crowded library. Guests are welcomed with live music and a cash bar in the foyer of the City Opera House. The 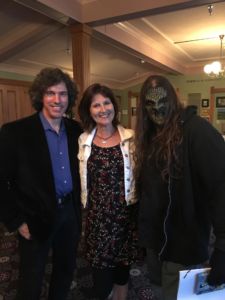 conversation begins; imagine dropping in on an intimate living room tête-à-tête. The lights undim and the audience has the opportunity to ask questions about the author’s personal journey to success, the writing process, or an inquiry on a certain book character. At the end of the evening, authors are available for a book signing, a quick chat and many will oblige for a selfie.

Who’s Coming Next? On May 3, Elizabeth Strout, Pulitzer Prize winner of Olive Kitteridge, will speak about her new novel, Anything is Possible, which features an adult Lucy Barton, the heroine from My Name is Lucy Barton. Guest host is Benjamin Busch, author and actor, who has a reputation as a prankster. (During a visit of writers and producers Jim and Lynn Kouf last year, Busch organized for a Grimm monster to appear on stage. The Koufs write and produce the Grimm Series and recently, “Money Monster” with George Clooney and Julia Roberts.)

Mary Roach, science writer with a twist, will visit Traverse City on June 7. She has written New York Times 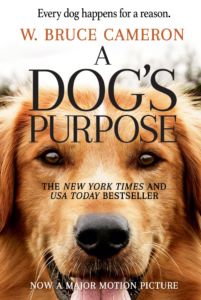 bestsellers such as Bonk: The Curious Coupling of Science and Sex and Packing for Mars, on life in space. Her latest book is Grunt: The Curious Science of Humans at War.

Be a part of the experience. Turn the page and open your mind. Six events remain until the season finale on July 7 with Bruce Cameron, author of A Dog’s Purpose, now a feature film. For a full list go to www.nationalwritersseries.org

Marina Call is Director of Marketing at the National Writers Series. For more information about this organization go to www.nationalwritersseries.org

More To Do Up North: