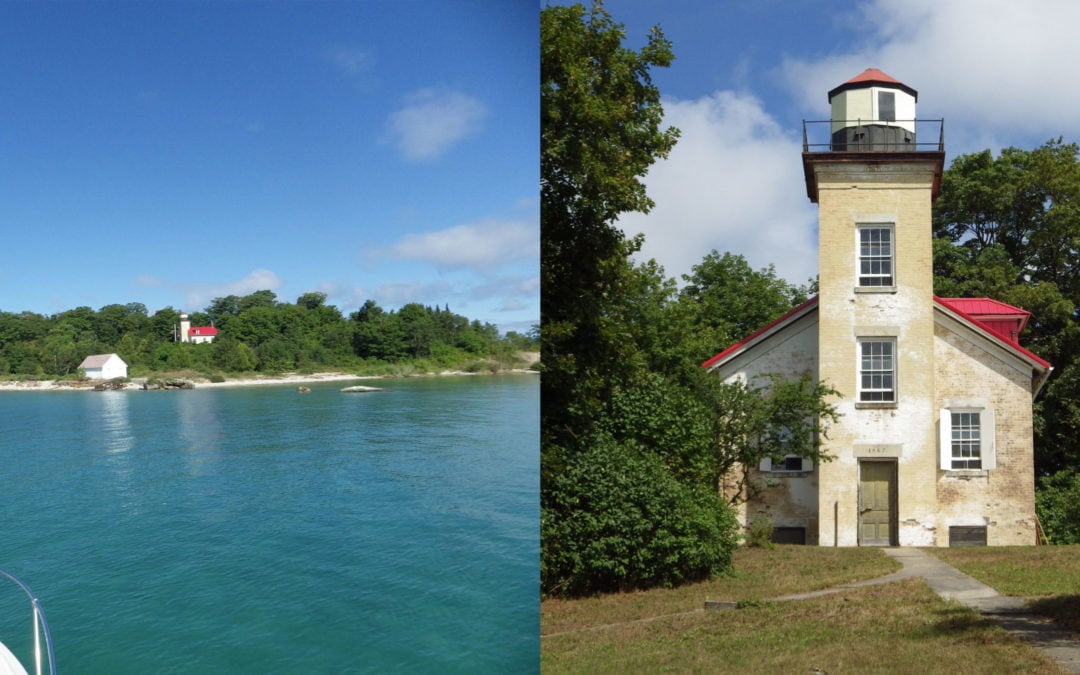 South Fox Island. -An Appropriation for a lighthouse became available on the 1st July last. The title to a portion of the requisite land at the site yet remained in the government, and the necessary reservation was made. The remainder was purchased from the State of Michigan, and upon the approval of the title by the proper authority, the work was taken in hand and completed in time to exhibit the light, for the first time, on the night of November 1, 1867.

Time has become more kind to the once mostly neglected South Fox Island Lighthouse. Constructed in 1867, it is an integral part of an isolated maritime complex located some 17 miles off of the tip of the Leelanau Peninsula in the sometimes wild, ever unpredictable Lake Michigan. This state-owned historic lighthouse is commemorating its sesquicentennial this year. For over 150 years the light guarded ships, helping them navigate through the shipwreck-laden Manitou Passage. Four other lights—all located in Lake Michigan— have reached the same age, namely Big Sable, Bois Blanc, Gull, Rock, and Sand Point lighthouses. 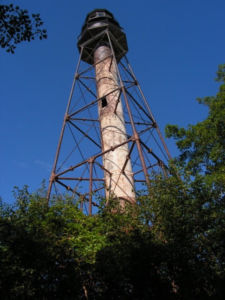 The South Fox Island Lighthouse was joined by a second light in 1934, then becoming an emergency backup system for the more powerful new beacon. It’s a 60-foot high steel skeletal tower and still stands. In 1933, the tower had been transferred from Sapelo Island, Georgia. Both of South Fox Island’s lights were abandoned by the US Coast Guard in 1959 and fully decommissioned in 1969. They, along with many other lights of the era, were no longer needed as modern-day navigational technology began to take over their once unique, privileged duty. The Department of Natural Resources (DNR) is now in charge of the state-owned property. This includes 112 acres of the lighthouse property.

Being situated so far off-shore makes preserving the light structures and adjacent buildings quite a daunting task. The whims of the winds and the weather rule. In 2004, persons of the then newly forming Fox Island Lighthouse Association (FILA) met with people from the DNR, the Grand Traverse Lighthouse, and others to discuss ways to save this near-forgotten station from further decline.

The DNR, itself admitting the immense hardship of caring for the island and its structures, noted, “This Station is one of the public natural, cultural, and historic resources managed by the Parks Division that does not receive any direct supporting revenue from user or access fees. State budget difficulties have resulted in no publicly funded repair or maintenance for many years. The South Fox Island Light Station is a unique public property …”

Finally, in 2013, the DNR, noting the long-standing serious commitment and dedication of its membership, granted FILA a 25-year lease. Prior to the lease agreement, FILA workers had quite a few accomplishments. These included saving the boathouse. Mother Nature nearly had her way to completely take it over. Powerful waves had thrown ashore tons of rocks; many landed into its very interior. Tons of rocks were moved, many single-handed by the might of one of FILA’s first members, Northport sailor, Phil von Voigtlander. Later more stone removal was done with the support of machine power manned by a team headed by Jerry Spears, also of Northport. The boathouse’s once heavily lopsided structure was trued, giving new “life-support,” repaired and re-roofed—saved in the nick of time.

One of the latest projects, and still ongoing, is also one of the most exciting. For the first time since 1959, light again shines through inside the darkened interior of the 1867 Lighthouse; the wood coverings had been taken down, the old, some cracked, but all delicate, window sashes carefully removed and wrapped for safe voyage back to the mainland. There they were lovingly restored, returned to the island and re-hung. A vast majority of this work was done by FILA members John and Karen Wells of Traverse City. In the removal and transport process, only one window pane broke! 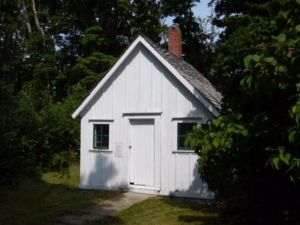 Other repairs done include the roof of the lantern room of the original lighthouse being painted and returned to the same radiant red of long ago, an icon for boaters to take notice when passing by. Another highlight was painting the oil house. Both its metal roof and door, as well as the brick exterior, are once again protected from the elements for the first time in well over fifty years. After clearing much brush from around the little workshop building, the front door was rebuilt, walls were painted, windows were re-caulked and cedar shingles—as on the original roof—were added, in compliance with the State Historic Preservation Office guidelines.

The fog signal building’s upper story had suffered extensive water damage from the poorly secured door that formerly led to the skeletal light tower. That door was secured and broken windows were replaced. During the summer of 2007, access was made to the steel skeletal tower for the first time in decades. Much work is needed on that alone.

“South Fox Light Station has 150 years of Great Lakes Maritime History, was a watchdog of the Manitou Passage and now is a vital piece of the Michigan Parks system, and more importantly, our local maritime heritage. We are proud to be a part of the light’s ongoing history and maintenance. It’s an honor carrying on the tradition,” commented John McKinney, FILA president. “We need people and their ideas to carry forward the 15 years of effort by the Fox Island Lighthouse Association thus far.”

For further information about South Fox Island Lighthouse, visit the FILAwebsitee; www.southfox.org. FILA meetings are held the second Monday of each month at the Great Lakes Children’s Museum in Grellickville at 5:30 p.m. All are invited.

Sandy Bradshaw, along with John McKinney and Hans Joerg Rothenberger, are co-founders of the Fox Island Lighthouse Association. A portion of this material was gleaned from Bradshaw’s upcoming second book on the Leelanau Peninsula. Bradshaw resides in Suttons Bay and Tarasp, Switzerland. Reach her at northernnetworks@charter.net.

More on Area Islands and Lighthouses: