This post, by Groundwork’s Communications Manager Jacob Wheeler, was first published in April 2017 on groundworkcenter.org as part of the “New Economy Project”—a multimedia storytelling series that highlights talented millennials in the Traverse City region, and raises awareness about their contributions to the local economy and community. Video and photos by Stone Hut Studios.

Of the hotspots where Traverse City’s growing community of young professionals, millennials and hipsters hang out, The Little Fleet might be the favorite nexus. Gary and Allison Jonas’ cool cocktail lounge and frolicking food truck lot, which opened in 2012 on the eastern edge of downtown, feels more like trendy Ann Arbor or Austin than quiet northern Michigan.

During a single 7-hour stretch in May 2014, Traverse City native Brianne Farley stood on a wooden ladder along the lounge’s east-facing indoor wall and painted a mural of playful animals and household foods. Farley’s whimsical figures are reminiscent of characters in a Shel Silverstein children’s book: outlines of serpents, chickens, cheese slices and sandwiches all walking in place toward the bar. At The Little Fleet the mural attracts curious eyes and light-hearted laughter over craft cocktails.

Farley was visiting from Brooklyn at the time, where she consumed the urban lifestyle and worked at Random House as a graphic designer. At one point during the 7-hour assignment she stopped to look around the bar. The crowd she saw didn’t reflect the Traverse City of her youth.

“I saw so many people that looked just like the kind of people I would want to hang out with,” she recalled. “When I left in 2002, it didn’t seem like there was much for people in their 20s and 30s. It certainly wasn’t a place where I would want to be single. But that day at The Little Fleet I noticed how much Traverse City had changed.”

A year later Farley’s roommates in New York, recently engaged, were moving out, her apartment lease was up, and her sister Kristin was about to leave North Carolina after a decade and move back to Traverse City with her husband and child-on-the-way. So she joined them.

“I realized that if I wasn’t paying New York City prices, I could probably afford to write and illustrate full-time. So, I moved back here ‘for the summer’ to figure out where I wanted to go next, and realized I wanted to stay here.”

Farley was drawn back to the slower way of life, to her family, and to Lake Michigan. The summer lasted into the fall, then the winter, then the following spring.

“I feel most at home near Lake Michigan,” she reflected. “There’s something really familiar and lovely about it that I don’t get from any other body of water.”

“I like that you can be in downtown Traverse City and then three minutes later be in a place that feels like the middle of nowhere, whether that’s out on the bay, on a farm or cherry orchard in Leelanau, or snowshoeing through the woods.”

Farley and her sister Kristin know every inch and every fallen apple in parts of northern Michigan where they frolicked as kids. Their parents’ land where they grew up on Old Mission Peninsula abuts an orchard and a creek.

“We spent all of our time outside,” she said. “We’d build weird forts under old sumac branches, and I’d read books while sitting in a tree.”

Those childhood experiences have since found their way onto the page.

Her second illustrated children’s book, Secret Tree Fort, Farley calls “a love letter to Michigan.” Loosely based on her and Kristin’s experiences playing in the orchard, she held the book’s launch party last April at Horizon Books in Traverse City. She also used Secret Tree Fort to answer the question commonly asked by her Brooklyn friends: ‘what did you do growing up in the woods?’

The answer? “Last weekend I helped my dad with a burn pile, moving firewood with the tractor,” Farley laughed. “I sent video of that to my friends in New York.”

In Brooklyn, her friends were struck by the bond she felt for Traverse City. When the show “Good Morning America” crowned the Sleeping Bear Dunes National Lakeshore in Leelanau County as the “most beautiful place in America” in August 2011, Farley gathered with her Big Apple friends to watch the announcement.

“My friend’s wife was making fun of us. She was like, ‘I’ve never seen people love their hometown like you guys do.’”

Farley’s love of place and love of art were intertwined early on. As she played in the forests and orchards with sister Kristin, Brianne always knew she wanted to make art.

“I drew all the time. I was that kid who never knew what our homework was because I had spent all day drawing in the margins of my homework planner instead of paying attention to the assignments. I loved books and telling stories. In fifth grade, we had to give a speech about what we wanted to be when we grew up. The first year I said I wanted to be an inventor like Ben Franklin, but the second year I said I wanted to write and illustrate books like Roald Dahl and Quentin Blake.”

After graduating from Traverse City Central High School, Farley matriculated at Macalester College in St. Paul, Minnesota , because she wanted to get out of her comfort zone. Graduate school at the Savannah College of Art and Design in Georgia came next, and that’s where she met a literary agent who connected her to Random House and paved her way to New York City.

Brianne Farley is lucky. She was able to bring her illustrating and editing job with her to Traverse City. She exemplifies the “gig economy” defined as a labor market characterized by the prevalence of short-term contracts or freelance work as opposed to permanent jobs.

“The gig economy and the ability to work remotely could help Traverse City since more people who could live anywhere will choose to live here,” she said.

The key to surviving in the constantly shifting gig economy, Farley added, is networking and collaboration. That means creating spaces, like The Little Fleet, where millennials and knowledge-based young professionals can gather to share ideas and build off each other’s talents.

“There are a lot of opportunities here to build the town you want to see.” 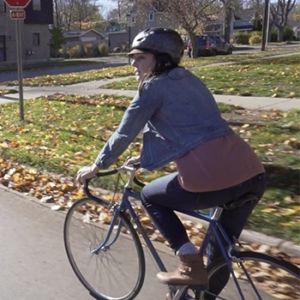 Farley, who bikes daily to her co-working space Studio Smiths in Traverse City’s Slabtown neighborhood, would like to see her community become more bikeable—or perhaps even launch a bike-share program.

“We should also have more affordable co-working spaces,” said Farley. “If we want more young people here, we should make this look like a place that celebrates youth and celebrates diversity.”

Farley also welcomes a shift in the Traverse City creative community to embrace diverse art forms that stimulate and challenge one’s senses and comfort zones rather than art intended to please. Think non-traditional performance art that should be accepted alongside pastoral paintings of the landscape and the lake. She sees more contemporary art in Chris Sims’ Prjct OMNI-curated installations in the Warehouse District, as well as at the Ecco event space on Front St.

“I would love to see young people here trying crazy things like performance pieces—even things that make you uncomfortable—as a way to attract non-local artists, too.”

“People are doing amazing things, but art that is weird and outside the box and new isn’t getting a lot of support, or it’s not connecting with other more established programs.”

“I’ve been to a few dinners that are these amazing collaborations between farmers, chefs, mixologists and winemakers that feel like some sort of collaborative art experience,” she said. “I’d love to see more collaborative pieces here. Community, agriculture and nature are Traverse City’s strengths, and could also be its artistic strengths.”

In an effort to share her art skills and to bring creative people together, Farley teaches a series of “Workshop Social” classes at Studio Smiths. She bills them as “part class, part friendly gathering,” with themes ranging from block printing to pompom-making to calligraphy.

“When I moved back here, I appreciated how much room there was for new programs. Starting a program like that was really doable. In Brooklyn, I might have gotten a group of artistic friends together but I never would have tried to start my own informal ‘school’.”

For more on the New Economy Project, check out these videos: