One of the perils of being a “foodie town” is that the restaurant scene can sometimes be a bit volatile. Even in a small resort community like Traverse City, it can seem like there’s a new eatery opening (or sometimes, closing) every week. It’s exciting, but also unsettling—especially for returning vacationers who want to know what happened to last year’s favorite bistro.

Fortunately, the Traverse City area also has its share of classic restaurants—hardy, unpretentious perennials that have been around for a generation or two (and sometimes more). And with good reason.

Take for instance, the case of Sleder’s Family Tavern, officially recognized as Michigan’s oldest continuously operated restaurant. Built in 1882 by Bohemian immigrants who spent three years of Sundays building it with slabs of scrap lumber from the nearby sawmills, it’s a rollicking icon of pre-hipster TC: wood floors, pressed-tin ceiling, a gazillion stuffed animal heads (including Randolph the famously kissable moose) and a menu that makes few concessions to contemporary tastes.

This is the kind of place where you come when you’re in a mood for burgers, wings and fried fish—though you’ll discover that the bison burgers are locally sourced, and that it’s one of the few places where you can order a basket of smelt (the proper term among Up North-ers is “a mess of smelt”) any season of the year. 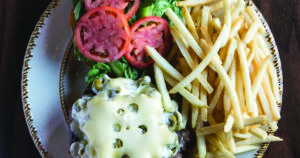 Not quite as old, but just as iconic, is the nearby Little Bohemia, which started out in 1932 as a hot dog stand with outdoor seating, a drive-up window and a speakeasy in the basement that could be reached through the back door. In later years it was the hangout of legendary professional golfer Walter Hagen after his retirement.

Lil Bo’s interior is as emblematic of the early 20th century as Sleder’s is of the nineteenth, with knotty-pine paneling and a cozy nook in the back for diners. Their olive burger and cherry bread pudding were praised by Michael Symon on the Food Network’s “Burgers, Brew and ‘Que,” but they also serve a tasty grilled eggplant entrée and several traditional Bohemian dishes, in deference to neighborhood history.

Just a few blocks down the street is another Traverse City landmark, the tiny J&S Hamburg, established in 1938 and still using its original grill. And yes, they do serve burgers here,but breakfast selections take up almost half the menu. (Through some kind of sorcery, the tiny place also produces an enormous array of cakes—try the carrot cake and pies.)

Speaking of breakfast, one of Traverse City’s most beloved morning spots is Round’s Restaurant on East Eighth, in the underappreciated Eastfield District at the corner of Eighth and Garfield. Round’s started in 1957 and quickly became a community institution.

Here again, the big draw is breakfast—in fact, they serve it all day. The big compliments always go to their homemade red velvet corned beef hash (red potatoes fried with onions and spices, then mixed with chopped corned beef) but the pancakes, cinnamon rolls and homemade toast are also popular, and the omelets are massive.

Lots of faux-Fifties diners and burger stands have come and gone over the years, but Don’s Drive-In, east of town along the city’s East Bay resort strip, is the real deal. Built in 1958, it’s a hot pink Cadillac of a diner, with red vinyl seats, real carhops who’ll bring your food to your car if you like, and a playlist that’s heavy on Elvis and the Shirelles.

The food is also classic: burgers (of course) and thick-cut fries cooked to order (smart diners ask for crispy brown). But the acknowledged stars at Don’s are the hand-dipped milkshakes and real malts. 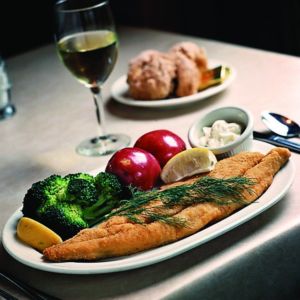 Whitefish at the Bluebird

Classic restaurants are still dishing up traditional meals in several of the area’s old-school summer resort towns. One standout, for instance, is the Bluebird Restaurant & Tavern in Leland, started in 1927 by local boatbuilder Martin Telgard and his wife, Leone on the banks of the Leland River. The Telgard family still runs the place, and it has grown into a 180-seat restaurant with an adjoining bar that seats 100.

Although they serve the full range of traditional resort-eatery fare, the strength of the Bluebird’s menu is in its fish offerings – especially the whitefish—not surprising since they’re located a stone’s throw from the Leland fishing docks. (The cinnamon rolls are also a perennial favorite.) Much of their food is locally-sourced from nearby farms, and they’re big boosters of the local wine and beer industry.

Northeast of Traverse City, the legendary Rowe Inn is still persuading local diners to get in their cars and drive an hour to the tiny village of Ellsworth. Back in 1972, owner Wes Westhoven decided to create the atmosphere of the French countryside in the middle of Antrim County’s Chain of Lakes region, catering to summer tourists from Charlevoix and Torch Lake, and the experiment succeeded.

The Rowe’s menu changes often, since their philosophy is to use whatever is freshest at the market — locally sourced whenever possible – but could include things like sweet potato gnocchi or roast duck breast in port wine sauce. Speaking of wine, their cellar is prodigious and diverse – 8,000 to 9,000 bottles at last count – one reason why they received a 2016 “Best of” Award of Excellence from Wine Spectator magazine.