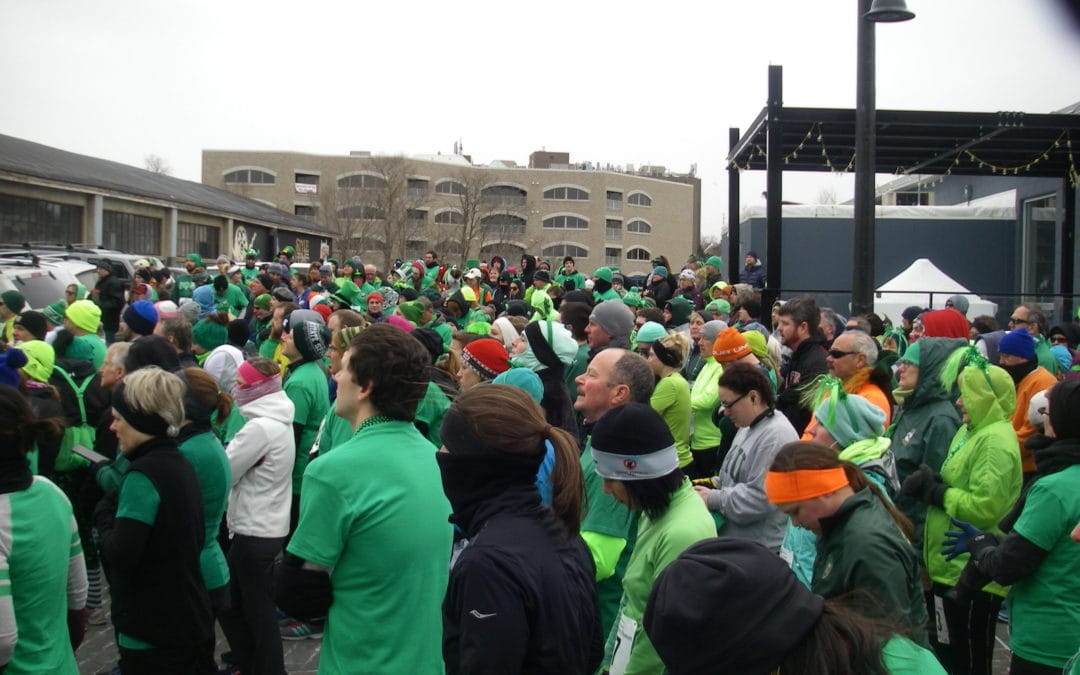 Michelle Elliott, race director for the Leapin’ Leprechaun 5K located in the Warehouse District, Traverse City on Saturday, March 11, 2017, welcomed nearly 750 runners, interns and volunteers to the 7th annual St. Patrick’s themed race. Denny Braun, former President and sponsor of the Queen’s Program at the National Cherry Festival, recalls when he assisted the first Leapin’ Leprechaun race with 65-degree temperatures. Racers were welcomed this year with 15-degree temperatures. “It felt really frigid as we waited for the race to start, but once the “sea of green” started moving, we warmed up fast.” In addition to the National Cherry Festival, Fifth Third Bank was an important sponsor that volunteered and coordinated photos for runners. The race started and finished at the Workshop Brewing Company, where runners over 21 could receive a free brew. Results can be found here.

I’d like to introduce you to a few special “winners.” (Of course, everyone who finished the 5K in these frigid temperatures became a “winner.”) Hank and Elvis Beatty, age 12, from TC, would have won the twin contest dressed as green elves. Susan DeCamillis, 58 of TC, qualifies as a “winner.” Susan discovered she had breast cancer in 2014. She experienced radiation and surgery, which helped her beat the feared disease. She said, “mindfulness, meditation, and a plant food diet were important to my recovery.” Leslye Robinson, 62 of Lake Ann, experienced breast cancer in 2003. The cancer was fortunately caught early, which allowed Leslye to have a bilateral mastectomy. Her friend, Karen Cook, 62, of Lake Ann, also ran the 5k in support of Leslye. Leslye participated with a fly-fishing group for cancer survivors, called Reeling and Healing Midwest, which has been very helpful to her recovery. She became an instructor for the group, teaching others with cancer how to fly-fish. Leslye received a big positive pat on the back when her oncologist “fired” her. No more oncology visits are required for Leslye! Leslye is a retired school teacher and now assists in a preschool. She highly recommends other cancer patients to get involved and enjoy life. Involvement could save your life.

Jessica Stark, 33, of Kingsley, and her family also participated in the Leapin’ Leprechaun. Her husband Chris, 34, took third place over-all, with her six year old son Eric, probably winning his age division. What is amazing is that Jessica pushed her daughter, Ally, in a stroller while seven months pregnant! Jessica started running in grade school “and never stopped.”  She adds, “it physically helps my hips feel better and mentally lifts my mood. I also feel it is helpful for making a smoother delivery when a person remains active for as much of their pregnancy as possible. I want to show my daughter, too, that just because someone is pregnant, it doesn’t mean you have to stop everything. It is a pet peeve of mine when others think you should be at home sitting down for nine months. I might be slow right now, but it beats sitting on the couch.” Valuable words from someone who should know. Jessica’s friend from Interlochen, Rebecca Noffke, aged 33, ran when four months pregnant. Do these ladies know a secret about exercise that more pregnant women need to learn? Rebecca would have won the pregnant mom category finishing the race in a fast time of 34:50.

We were honored to run with a class of 2019 U of M nursing student and her friend, Stacie Farmer, 45, of Frankfort, who wore her U of M sweatshirt. GO BLUE! They were accompanied by my friend Jim McManus, MSU class of ’91, (GO BLUE!) who started running because it is a “very efficient way to get exercise in a short time.” Jim is a national sales director. OK, go green.

Ken Revort, 55, and his friend Mike Peacock, 60, both from TC, run to keep up with their wives. Don Korty, 71, of TC, runs to control high cholesterol, which is often not in the normal range. Len Kostra, 62 of Interlochen, says “running is a great mental workout.” Our “Honey Bee,” Dean Haselton, 44 of TC, runs to keep his “round shape” and to stay fit. He would have won the honey bee division.

Michelle Elliott organized a nice race event for what turned out to be a cold day. She encourages you to get healthy and join her for the National Cherry Festival Races, July 8, 2017, and next year’s 8th Annual Leapin’ Leprechaun 5K. Ask your doctor for permission before starting an exercise program. GO GREEN, that’s the Irish green.

Mickey Fivenson, 74, of TC, is a stroke survivor. Mickey’s doctor credits running to his survival. He is the former director of the National Cherry Festival Races. Mickey founded the Cherry Festival Golden Mile and Wheelchair Races. He completed over 60 marathons and holds a marathon record with sons, Zack and Adam. He has trained 150,000+ miles in 48 years of running. He took second place in his age group.  If you’d like tips on running, on marathons, if you have a story to share how running has impacted your life, or if you would like coverage of your race, contact Mickey through the editor.