Dinner at the Grand Hotel on Mackinac Island: 130+ Years of Caviar and Aristocracy 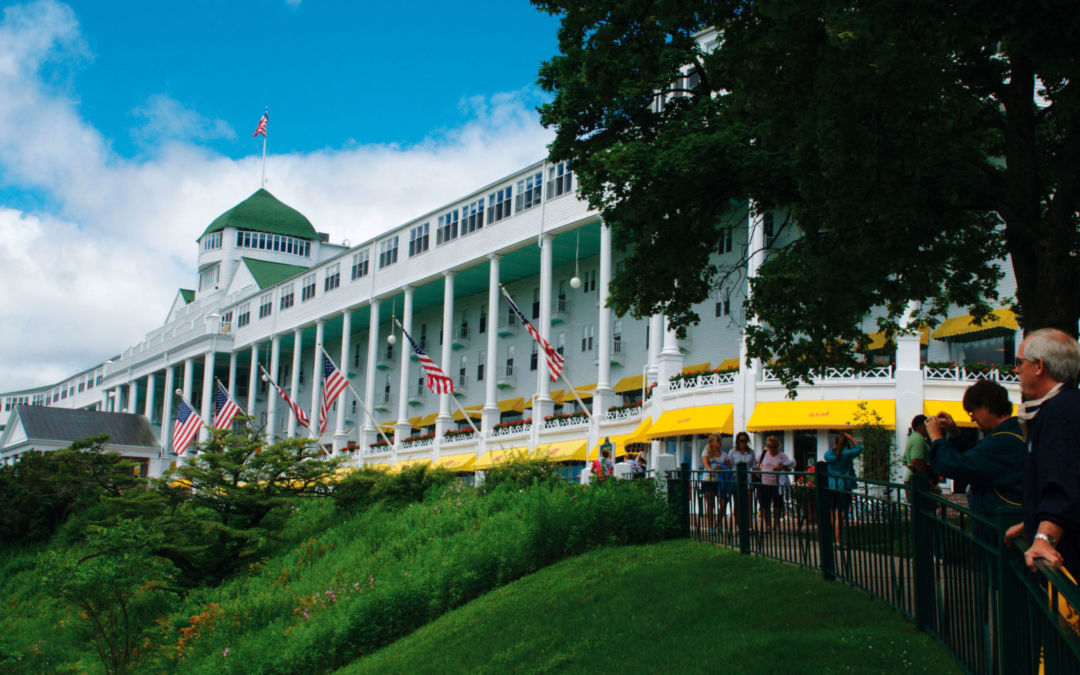 As another magical season nears on an unforgettable island, we take a look back into another century at the inaugural dinner held at the Grand Hotel on Mackinac Island. Here’s how it began …

For those invited to the Grand Hotel’s lavish inaugural dinner July 10, 1887, attire both formal and forgiving was best advised. Guests were to eat and drink as East Coast aristocracy did, though they stayed amid wilderness in the northernmost reaches of Lake Huron, on a remote island called Mackinac.

A small army of chefs trained in the finest New York City hotels prepared the banquet, which was served in a dining room with a two-story-high ceiling, white and gold columns and rich terra cotta walls. The elegantly set tables for six were of cutting-edge design—as a reporter from the Grand Rapids Democrat writing of the hotel’s opening noted: “They are each supported on a central iron pedestal and thus no legs crowd those who sit at them.”

As the sun set over the Straits of Mackinac, the hotel’s newfangled electric lights flickered on, and guests made their way through a parade of courses that blended the best local ingredients with flavors from faraway ports: Pâté de Canvasback Duck, Salmon Portugaise, Ballotine of Pigeon. Artichokes, peas and tomatoes. Charlotte Russe à la 1887 or Mousse à la Framboise for dessert. And complementing each course—Champagne bottled in Napoleon’s France, Spanish sherry, and German cabernet. Such was the launch of the Grand Hotel’s illustrious culinary tradition. 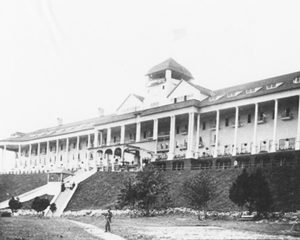 Rich as the Grand’s dining legacy is, the details have largely been lost, dissolved in a century of summers. Entire sets of china were carted to the dump when they became outdated. Menus were burned with the daily garbage, cookbooks and seating charts tossed out, chefs’ names forgotten. “Hotels never know they are going to become old hotels,” says Bob Tagatz, the Grand’s concierge and house historian. In trying to build an archive, he has few tools other than searching eBay for hotel memorabilia. He can’t even guarantee the accuracy of the menu, described above, for the hotel’s inaugural meal, lifted as it is from a 1957 Chicago Daily News article commemorating the hotel’s 70th anniversary. Was the reporter reading from an actual menu, or relying on a press release from the Grand’s first manager John Plank, known to embellish? We don’t know. The primary sources have disappeared from the hotel archives.

Nevertheless, the trail of great meals woven through 121 Grand Hotel seasons is unmistakable. Clues surface in newspaper clippings and menus that managed to survive house cleanings. But mostly the evidence is embodied in the hotel’s very identity: Dining is, and has always been, as important to the Grand Hotel experience as the world-class vista outside its windows.

From that very first dinner in 1887, the Grand’s cuisine has been marked by the wealth of ingredients that lie at its doorstep: lake trout, whitefish, berries, fresh cream, eggs, peas and wax beans. But neither distance nor the fickle Straits of Mackinac have ever hindered Grand chefs from straying far for their raw materials. Early on in the hotel’s history a Grand Hotel agent lived in Chicago during the summer for the express purpose of selecting the “primest of the prime beef” from the city’s slaughterhouses, then stamping it with the Grand’s own seal and sending it north.

Chefs imported coconuts and bananas from the tropics and spices from the Orient. And the Grand has always served seafood—clams, oysters, lobsters, softshell crabs, Atlantic salmon, striped bass. While the clams and oysters were probably canned, much of the seafood was fresh, packed in ice in the East, then sent by the newly invented refrigerated railroad car to Chicago or Detroit, where it then traveled by boat or rail to the straits. “Foodstuffs back then pretty much arrived as they do now,” says Steve Brisson, Chief Curator at Mackinac State Historic Parks. “Fresh seafood, meat and vegetables could easily find their way to the Grand Hotel.”

If a lobster could get to the Grand, so could Mark Twain. The writer/humorist was a guest, at least once, in the summer of 1895. Twain was 60 and The Adventures of Tom Sawyer and Adventures of Huckleberry Finn had already met worldwide acclaim. Even so, several bad investments forced Twain to hit the lecture circuit—and he landed an engagement at the Grand Hotel. Whiling away summer days on Mackinac Island was hardly a hardship. Throw in the food, and Twain was living large. If a menu that survives from the previous summer is an indication he might have dined on Stewed Breast of Veal with Dumplings, and certainly would have indulged in bananas—either frittered with wine cream sauce for dessert, or simply sliced with his after-dinner coffee. Americans were still honeymooning with the fruit at the end of the 19th century, following the banana’s introduction at the 1876 Philadelphia Centennial Exhibition. 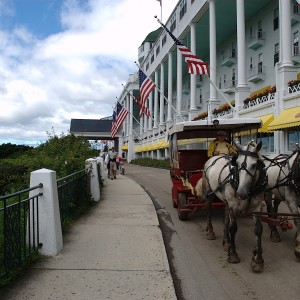 But Twain’s stay at the Grand isn’t best remembered for his meals there. Instead, it’s recalled for the panic of then hotel manager James Hayes when the lecture gallery was still empty minutes before Twain was to begin. Just as the clock struck the hour, the house filled—the audience making a fashionably late entrance.

The stylish guests no doubt included some notable persons. Mrs. Palmer Potter (whose husband founded Chicago’s Palmer House hotel) discovered the Grand several years after its opening, and put it on the Chicago society docket. The Armours and Swifts (of meat packing fame), Marshall Field (the department store founder), and George Pullman (inventor of the railway sleeping car) were frequent visitors. Railroad magnate Cornelius Vanderbilt, whose money helped finance the Grand, came too—Tagatz found a copy of his signature on a hotel document owned now by Plank’s great-grandson.

Though the hotel was a hangout for the genuinely rich and famous, Grand managers still felt the need to invent visiting dignitaries—especially presidents—in press releases and brochures. Visits by Theodore Roosevelt, Grover Cleveland and William Taft were all fabricated. Ah, but those presidents missed some memorable meals. Had they been there in August of 1904, for instance, they might have dined on pâté de foie gras—served in the new gold and white dining room.

The early 1900s were marked by financial upheavals at the hotel, but guests in the dining room seldom knew it. Nor did they feel parched during Prohibition. Spirits were smuggled from Canada to the island where they were picked up by hired “nannies” pushing baby carriages. The nannies strolled their carriages long enough to fool revenuers or any vacationing member of the Women’s Christian Temperance Union, and then unloaded at the Grand’s kitchen door. Perhaps it was this Prohibition-fostered inventiveness that helped inspire the Grand Pecan Ball. To this day, the hotel’s signature dessert, French vanilla ice cream rolled in pecans and covered in hot butter-fudge sauce was created in the 1920’s by a Grand chef looking to capitalize on the island’s new fudge mania.

The Depression dealt a near fatal blow to the Grand. The hotel was put on the auction block in 1933. Nevertheless, that summer guests dined on Crabmeat au Gratin. And by the end of World War II, the hotel’s reputation for grandeur returned, enough so that it was chosen to stage This Time for Keeps, a 1947 film starring Esther Williams and Jimmy Durante. Ironically, while state-of-the-art movie technology chronicled Williams stroking her way across the Grand’s luxurious serpentine-shaped swimming pool, the fowl and fish she’d eat later were stored in an archaic icehouse, chilled by ice harvested from the straits in the winter. The Grand didn’t receive refrigeration until 1949.

In the mid-1950’s Harry Truman became the first bona fide ex-president to visit. What did he dine on? Perhaps Curry of Spring Lamb with Rice à L’Indienne, but we don’t know for sure. All we do know is that by the time John F. Kennedy came to the Grand while campaigning for president in 1959, the hotel’s cuisine, though still an elegant dining experience, had slipped from the avant-garde. Call it the era of prime rib and whitefish, the result of appealing to the cautious Midwestern palate.

Two events helped tug the Grand back to its golden age of food. In 1979, Jane Seymour and Christopher Reeve filmed the movie Somewhere in Time on Mackinac Island. Set in the Grand Hotel of 1912, the film awakened the hotel to its roots in the age of the Victorian Empire—when food was spiced with the flavors of far-flung ports. Three years later, Chef Hans Burtscher was hired at the hotel. In his nearly 30 years at the Grand Hotel, Burtscher has rekindled a cuisine of Asian and European influences—fused with buffalo, venison, lake trout, whitefish and the rest of the cornucopia at his Mackinac Island doorstep. 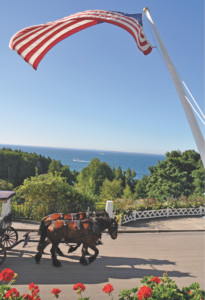 The Grand’s dramatic white colonnade and elegant interior also continue to couple political discourse and culinary extravagance with the Mackinac Biennial Republican Leadership Conference—an event held on the island for over 30 years. Republican Party power players read like a Who’s Who of attendees, but when Chef Hans Burtscher oversees the preparations of each course, the food deliveries harken back to an almost primitive era. Cooking on an island in northern Lake Huron where motor vehicles are banned is still a formidable task. The 200,000 pounds of meat, 22,000 pounds of shrimp, 500,000 eggs and other raw materials the kitchen uses each summer arrive at the island by ferry, then horse-drawn drays haul the food to the hotel. And if Burtscher discovers after the last ferry at 5 p.m. that 10 of the 20 flats of strawberries he ordered are rotten, he has no alternative but to break the news to the hundreds of guests who want them for breakfast.

But, like his predecessors, Burtscher is part alchemist, and guests seldom notice behind-the-scenes calamities. The meals remain unforgettable. Dressed for dinner according to the Grand’s standards (coats and ties, dresses, pantsuits), and seated in the 1901 dining room, guests are served exquisite food by an attentive wait staff—who, if asked, graciously explain which of the 11 pieces of silverware to use for what. Or suggest how to avoid sending a frozen Grand Pecan Ball off the plate when cutting. When the dishes have all been cleared away, dining at the Grand Hotel hasn’t changed much in 130 years.

Savor This Menu From Dinners Past:

An oldie, but goodie… behind-the-scenes video with Traverse Magazine at the Grand Hotel: