April Concert Treats for Staycationers at Interlochen and the Ramsdell Theatre 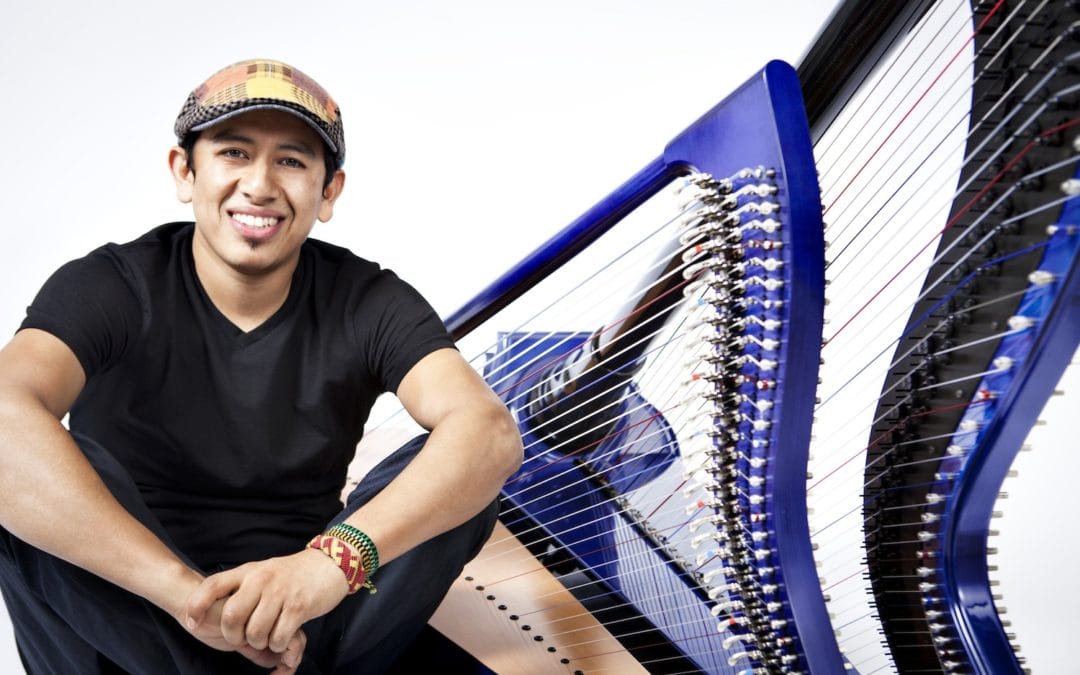 While everyone else is heading to the sunny south for spring break, you’re stuck here in dreary, gray Northern Michigan. Ah, but not to worry, for there are great things happening during your “staycation.” A trio of performances from a diverse slate of artists highlights the first week of April: Colombian jazz harpist Edmar Castaneda, guitarist of all sorts David Lindley, and songwriter/singer Jimmy Webb.

Actually, it’s a quartet of concerts, as Castaneda is playing two shows: April 6 at Interlochen and April 7 at the Ramsdell Theatre in Manistee. Get your tickets to see Castaneda at MyNorthTickets.com.

Reached by phone at his New York City home, Castaneda says he grew up playing the harp, the unofficial instrument of his home country. “In Colombian music the major instrument is harp,” he says.

When he moved to the U.S. at 16, however, he found there wasn’t a lot of call for his main axe. What’s more, he fell in love with jazz, so he switched instruments. “In high school I played trumpet in the band. Trumpet helped me to learn improvisation. I still played harp, but there was no way to study it in jazz,” he says. When he was in college, he got some solo gigs at restaurants playing harp. Over the years, he developed a method of playing little influenced by classical music. “I never studied classical harp,” he says. Instead, his musical education came from the likes of Duke Ellington, Charlie Parker, and Miles Davis.

Even his harp is unique. Unlike their classical cousins, Colombian harps are not chromatic. “It’s like only the white keys (on piano),” he says. So he worked with a French manufacturer to create a Colombian harp that was fully chromatic, enabling him to play virtually anything.

He considers his music jazz informed by other styles: Colombian folk, flamenco, tango, and all the other genres bubbling under the surface in his adopted home city. “I’ve lived in New York since 1994. The city gives me such a mix of music,” he says.

Castaneda has played in a variety of settings, including a full band with rhythm section and horns, a duo with vibraphonist Joe Locke, and an upcoming slate of shows with piano sensation Hiromi. In his concerts at Interlochen and Manistee, he’ll be joined by Interlochen alum Marshall Gilkes on trombone and Henry Cole on drums.

Lindley performs April 8 at Milliken Auditorium. Get your tickets at MyNorthTickets.com.

In the late ’60s, Lindley founded the Kaleidoscope, which is now viewed as the first world music rock band. After performing on everyone else’s albums (including vocalizing on Browne’s “Stay”), he founded another group, El Rayo-X, in 1981. It fused American roots music and world beat with a heavy reggae influence, and was represented with three albums: El Rayo-X, Win This Record and Very Greasy, as well as a live EP. During this period he also came forth with a solo album, Mr. Dave.

He formed a duo with fellow guitarist Ry Cooder which continues to bear fruit. An inveterate musical traveler, Lindley and guitarist Henry Kaiser went to Madagascar for two weeks in 1991 and recorded six albums of indigenous Malagasy music. His discography includes all the above, plus various other studio and live recordings. Among the most prominent is his document of a short Spanish tour with old compatriot Browne, which the All Music Guide praised, saying, “It succeeds grandly because of a sparse, tasteful approach with excellent arrangements and genuinely inspired performances.” Among its highlights is a version of the Eagles hit “Take It Easy,” which Jackson co-wrote, which here is transformed into something approximating Spanish bluegrass.

His solo shows combine everything from American folk, blues, and bluegrass traditions to elements of various world music: African, Arabic, Asian, Celtic, Malagasy, and Turkish. Lindley incorporates an array of stringed instruments into his music, including, but not limited to, Kona and Weissenborn Hawaiian lap steel guitar, Turkish saz and chumbus, Middle Eastern oud, Irish bouzouki, along with all manner of guitars and banjos. In fact, he’s mastered such a wide variety of instruments that in a 2005 cover story, Acoustic Guitar magazine referred to Lindley not as a multi-instrumentalist but as a maxi-instrumentalist.

Lindley covers a wide swath of music in concert, performing songs made famous by everyone from Dolly Parton to Warren Zevon to Bonnie Raitt, but all in his own way. He’s liable to approach a bluesy song from an Appalachian perspective, or flavoring a country tune with Hawaiian slack key guitar.

Songwriter Jimmy Webb has been a part of the American musical fabric since the late ’60s. His songs have been performed by a who’s who of singers: Barbra Streisand, Elvis Presley, Isaac Hayes, Art Garfunkel, Linda Ronstadt, Michael Feinstein, and Judy Collins, among others. His two latest CDs, Just Across the River and Still Within the Sound of My Voice, feature duets with friends including Billy Joel, Jackson Browne, Vince Gill, Willie Nelson, JD Souther, Glen Campbell, Lucinda Williams, Mark Knopfler, Brian Wilson, Lyle Lovett, and Keith Urban. His hits range from disco to pop, from “Worst That Could Happen” and “The Highway Man” to “Up, Up and Away” and “MacArthur Park.” 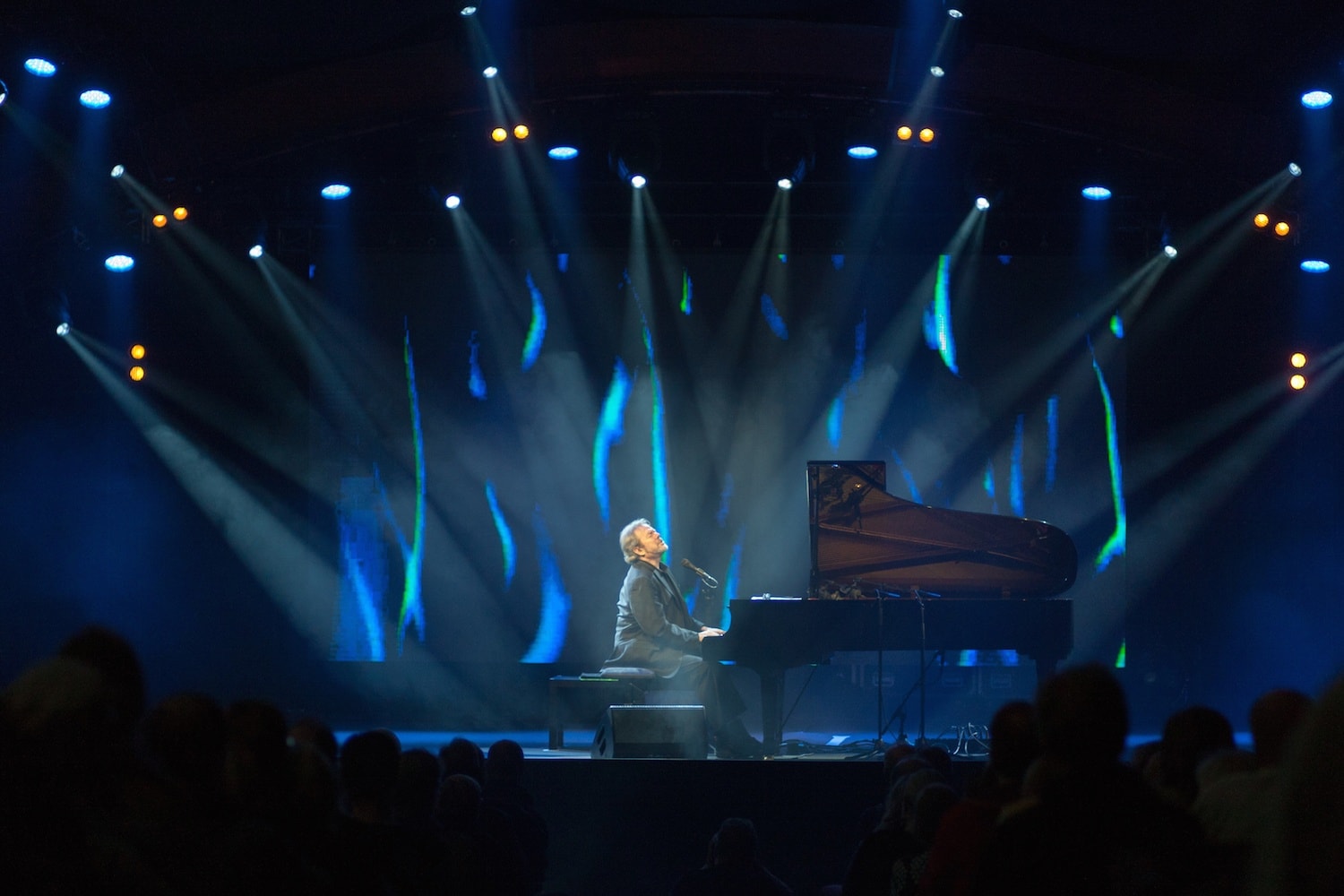 His April 8 show at Kirtland Center for the Arts in Roscommon is more than just a concert. “The Glen Campbell Years” is a multi-media showcase with Webb singing, playing piano and reminiscing about his time with Campbell, highlighting some of the 100-plus recordings from the Webb/Campbell songbook.

“When I was 14, I heard a record of Glen’s ‘Turn Around and Look at Me.’ That was the first time I ever used my own money to buy a record. I got the crazy idea I’d write songs for Glen Campbell. I prayed about it, and I wouldn’t be dissuaded.”

That sounds natural enough now, but this was back in 1961. Webb’s father was a Baptist preacher in rural Oklahoma, where the younger Webb was working on the farm, and becoming a songwriter seemed like a pipe dream. In 1964, his family moved to Southern California, where Webb studied music. Obviously, he did eventually write songs for Campbell, though the two had a rather tense relationship at first. “I had a hit with Glen before I ever met him (‘By the Time I Get to Phoenix’, first recorded by Johnny Rivers). It was kind of an uneasy partnership,” says Webb. Campbell was not only an established star, but politically conservative, while Webb sported the long hair of the day and decidedly liberal attitudes.

But neither could deny the power of the hits they made together—generational touchstones like “Honey Come Back,” “Where’s the Playground Susie,” “Wichita Lineman,” “Galveston” and more from decades of shared musical memories. Webb remembers his friend in these shows, even singing a duet with a pre-recorded Campbell.

Webb is also bullish on the musical talents of Campbell, who played on, sang and arranged countless recordings before breaking through as a solo artist. “Tennessee Ernie Ford, the Velvet Underground, Ike and Tina Turner, Shelley Fabares’ ‘Teen Angel’, ‘You’ve Lost That Lovin’ Feeling’—he’s all over everything. This is something everyone should know. They don’t know Glen Campbell’s pervasive influence.

“Glen was the veiled colossus lurking behind so many hit records. It was only a matter of time before he came out swinging. He was usually the bandleader. He was an arranger, he’d put the hooks and intros into songs, he’d speed them up or change chords. He’d even change the words.”

As an example, he points to “Galveston.” Webb’s inspiration was a friend who had been killed in Vietnam, and his own version is slower, elegiac, more reflective. “When he (Campbell) came out with it, it was more up-tempo, with a kind of Duane Eddy, Western feel. You didn’t get the feeling of poignancy,” says Webb.

He also wrote scores of songs recorded by other artists. The Fifth Dimension covered numerous songs of Webb’s, including “Up, Up and Away,” The Brooklyn Bridge had its only hit with “The Worst That Could Happen,” and his tunes were sung by Elvis, Sinatra (both Frank and Nancy), the Supremes, Nina Simone, and Sammy Davis Jr.

Perhaps his most enduring non-Campbell hit was “MacArthur Park.” Originally written for the Association, it ended up being recorded by everyone from Donna Summer to Waylon Jennings to bravura jazz trumpeter Maynard Ferguson. Webb calls it an experiment in combining pop and classical forms in a suite with different movements. When the Association turned it down, he met with actor Richard Harris, who was looking to make an album after his success in Camelot. It was the last song of a batch Webb played for him, and Harris loved it. “He went crazy. I never expected that,” says Webb. It went on to become #2 in the U.S. and topped the charts in the U.K. During David Letterman’s final run on The Late Show, Webb guested with the band and they did an arrangement of the song with bassist Will Lee singing.

So there you have it: Four concerts in three days by three very different performers. For ticket information for Castaneda’s performance at Interlochen, go to tickets.interlochen.org. For all the other shows, go to MyNorthTickets.com. And enjoy your staycation!