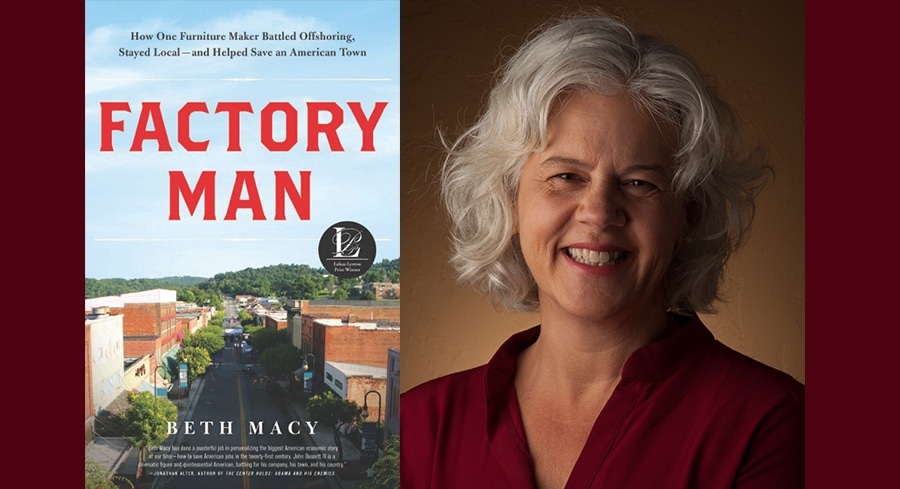 One word captures the essence of Beth Macy: persistence. Growing up poor, she was the first person to go to college in her family. She credits teachers and other mentors who inspired her along the way and is now a New York Times bestselling author.

Macy pays attention and her beautifully written books are the product of her hard labor. As a journalist for the Roanoke Times, Macy wrote several lengthy features on the effects of globalization in southern Virginia. Her interest in this topic and the experience as a Nieman Fellow propelled her transition from journalist to author, and Factory Man was born. This novel brings to life John Bassett’s deeply personal furniture-and-family story, along with a host of characters from an industry that was as cutthroat as it was colorful.

Macy’s second book, Truevine: Two Brothers, A Kidnapping, and a Mother’s Quest: A True Story of the Jim Crow South was released in October 2016. It’s a powerful story of two albino boys born to African-American parents and enslaved by the circus as sideshow freaks. They were billed as “Cannibals from Ecuador” and “Ambassadors from Mars”, drawing huge crowds across the country. The young boys were told their mother was dead, but one day they learned the truth. Truevine was a finalist for the 2016 Kirkus Prize.

I recently caught up with Beth Macy as she prepares to travel to Traverse City.

You have a connection to Traverse City through Bob Giles, a former Detroit News publisher who now sits on the editorial board of the Record-Eagle — tell me about that.

Bob was a longtime Nieman Fellow curator at Harvard University. The Nieman program is the most prestigious fellowship program in the world. Somebody at Stanford may object to that. (laughs) It was rare for a person from a paper my size (Roanoke Times) to be accepted to the Fellowship. I did not get in the first time I applied so I tried again. I think Bob admired my persistence and that I wrote about underdogs… we bonded over that. There were 24 fellows, 12 American and 12 international. I felt intimidated by the other participants… there were war reporters and photographers, people who were much more sophisticated and well-traveled than I was. I was the only American who came from a poor family. Once I broke out of my shell, I was able to take the experience from my classes and realize that my small stories, which I thought were not as important as the ones in the big cities, were really important too. I was about to turn 50 and it gave me the confidence to write a book. Factory Man grew out of a series that I wrote right after I returned from my Nieman fellowship. I’m so grateful to Bob for believing in me.

What first compelled you to become a reporter?

I like telling untold stories … I love going out and interviewing people and gathering information, that is my extrovert side … I also love the quiet side of thinking and presenting it in writing. I admired my English teachers, loved librarians, and grew up down the street from the library. I was one of those lucky people in college who chose journalism and never changed majors. What I loved about being a newspaper reporter is that no day was ever the same. Always out interviewing, meeting people and getting the privilege to tell their story.

You are originally from Ohio, but end up in Roanoke, Virginia. What brought you there?

Roanoke Times was my third job after graduating from Bowling Green State University in Toledo, Ohio.

It was 1989—I was 26 when I arrived in Roanoke, and thought I was going to be there for just a short while. In order to move up in journalism, it seems you have to move around. I met my husband here and he had family and wanted to stay.   The Roanoke Times had great reporters such as Pulitzer Prize winner Mary Bishop, who became my mentor. Funny thing is that Bishop is now writing her first book and I introduced her to her first agent. I was happy to give back to her for everything she taught me.

Are you still at the Roanoke Times?

How did you transition from reporter to author?

I called my author friends to get advice. Many were from the Nieman fellowship, another Bob Giles connection. I would say that (both) are basically the same skill. Sitting in my chair, with loads of pieces of paper all around me and giant timelines on the wall. It’s basically a big giant book of stories I am trying to thread together. Same skills you would use in a major newspaper piece but longer, they have to fit together, like a puzzle.

Factory Man is about John Bassett and his journey to save his family’s furniture business from foreign pressures. Do you think Bassett’s experience in Factory Man can transcend to other businesses?

Yes, in fact John Bassett has even written a book called Making it in America about his principles for being competitive. I cover the same principles in my book but I am not interested in writing a how-to book. Factory Man is a narrative story. I wanted it to be the every-person’s book that explains globalization in a way that you really don’t get when you read more technical business articles. I am attracted to themes of family feud, that’s really interesting and people can relate to topics like that. It’s a people’s story of a hero underestimated at every juncture and who prevails. The business stuff is not my jam but I told it in a simple way that people who weren’t interested could not only understand (globalization), but be interested in too.

Globalization and trade are hot topics. Are you having more interest in Factory Man with the current political environment?

I did get interviewed a bunch during the election ,including by the Wall Street Journal and Politico. I wrote a big article about this on my blog.

The media did us a disservice by only covering trade issues in New York and Washington and not in the small towns. I think there is interest in people trying to understand what happened with the election—and I do think you can point to Factory Man and say that people in rural America were discounted and were not listened to in our larger national discourse. That is why we were surprised when someone like Donald Trump won.

I don’t believe it when Trump says, “I am going to bring ALL these factories back.” It is way more complicated than what he is misleading people to believe, but what he did, for good or for bad, is tap into this anger that is out there: a distrust of politicians. I think Factory Man predicted that in some ways, not directly, but if you go to the last page … people wanted to witness what had happened to them through no fault of their own.

Truevine is your second book and tells the story of two albino brothers that were kidnapped by the circus. You seemed to grapple with the issue of whether the two boys were mentally impaired based on historical evidence and current-day sources. Tell me about the challenges in that.

I grapple with the fact that they were misrepresented. I think they may have been socially impaired at the beginning but there is all kinds of evidence that they were not mentally impaired. Because of albinism, the eyes dance or strain and can’t focus, so people assumed that people with albinism were stupid. I hope the book corrects the views on albinism among other things.

The mother of these boys was an illiterate black maid named Harriet Muse who was able to outwit the shysters who kidnapped her sons. The story is fascinating. Why did you write Truevine?

I heard of Harriet’s story when I first moved to Roanoke.

Persistence, building trust, some stories are worth 25 years. I never really thought I would write a book … that is not why I was doing it. It started out as research for a series of topics on caregiving for the elderly. I was getting information outside of my zip code, it was the right thing to do. This is what my editor taught me to do … to connect readers to all kinds of people; that is what journalists should be doing all the time.”

Truevine describes the town of Roanoke as a very tough place for an African American to live. Is it still like that?

It’s a place that is fairly segregated. Not legally, but it does not have a large Black middle class. Every since I started hanging out there, I have gravitated to stories of race and social issues. The neighborhood where Harriet Muse brought the brothers home in 1927 is still the poorest neighborhood in the city.

What do the two books have in common?

That is a really great question. They seem very different, one is about a very poor illiterate black maid who is a hero and the other is about a multi-millionaire at birth. Both are gritty people from rural America who were largely underestimated and prevailed against many odds. That is what I really like, they are both bad-ass characters, you couldn’t make them up. I love that theme…when somebody who is underestimated wins in the end. Harriet in Truevine outwits the shysters, that is the how suicidally bold she was. I love those kinds of stories. They both cover issues of the same 120 years, they both cover race. Bassett’s family got rich because they hired blacks when everybody else used them for sharecropping. His grandfather paid them half of what he paid the whites…that is how he got a competitive advantage; he was very shrewd, very much of that time. The theme of exploitation and minority workers register in both books.

You mentioned that you’re not doing interviews during the day because you’re on a strict deadline. What are you writing now?

The working title is “Dopesick.” It’s a book about the heroin and opioid epidemic and something I have been reporting on since 2012. It’s a huge epidemic that is getting worse. Very, very dark…I am finding stories to illuminate it and also educate people to protect their families.

Did you try heroin to write this book?

[Macy laughs] My mother, who is going to be 90 years old, keeps asking me that same question. No, I have never tried heroin.

Would you say that this new book shares a theme with your other books?

Two of the heroes are a 69-year-old country doctor, and a 83-year-old nun who take on Big Pharma. There’s my tease!

Tom Hanks tweeted, “Factory Man deserves 142 stars” and loved it so much he is developing it into a feature film. The word on the street is that Leonardo DiCaprio is interested in Truevine.  Is it a dream of yours to see your books on the big screen?

No! Who would imagine that? It’s crazy! The day Tom Hanks tweeted about Factory Man I was at the local NPR station getting ready to go on the Tavis Smiley show and got a text, “Holy Crap, have you seen what Tom Hanks tweeted?” My agent, Peter McGuigan, ended up contacting Hank’s people and now it is under development as a film. Hopefully it will bring attention to people who have been underestimated and whose stories have not been told. That part is really exciting. 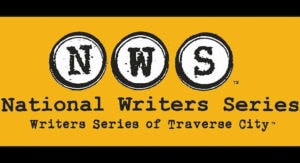 Beth Macy will be visiting Front Street Writers students to speak about journalism, writing and the challenges and advantages of living in a small town. The National Writers Series evening in conversation with Beth Macy will take place at the City Opera House on Monday, February 27 at 7 p.m. For more information click here or call 2319418082, ext. 201.

More on the Stage and Around Town: