How to Survive a Northern Michigan Bear Encounter 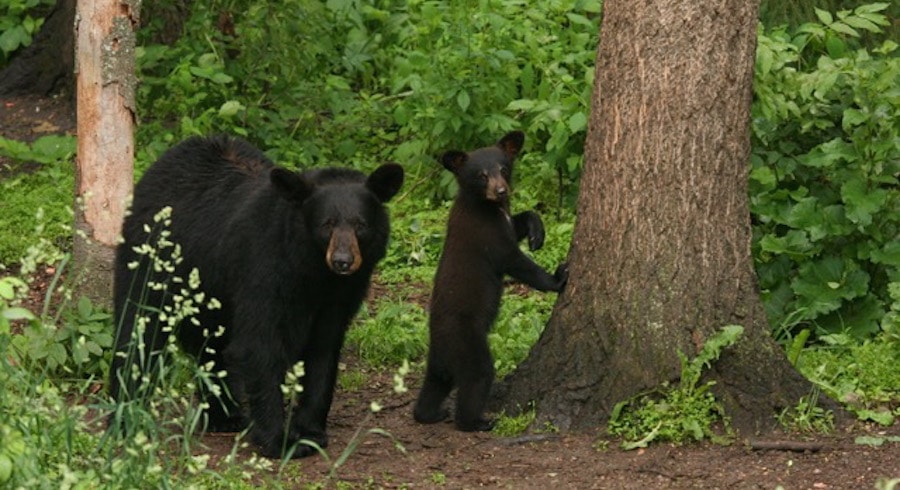 Spring is officially here (YAY!), and with it, hibernating bears will be waking up from their winter slumber. While it’s unlikely for people to see a bear in the Northern Michigan outdoors, it does happen. There are about 9,700 bears in the Upper Peninsula and over 15,000 statewide—the northern Lower Peninsula has seen an almost 50 percent increase in black bear population since 2000—according to the Michigan Department of Natural Resources.

We talked with Kevin Swanson, a wildlife management specialist with the Michigan Department of Natural Resources, about what to do if you see a bear. Kevin has over 10 years of experience and is an expert on Michigan bears.

[5 More Must-Know Tips From the DNR]

When do bears typically start to come out of hibernation?

“In the Lower Peninsula it can happen as early as March depending on the weather, but normally bears come out of hibernation in April. That’s pretty common for the Upper Peninsula too, though they occasionally come out in late April or early May.”

How does the population compare to years past?

“The population has remained somewhat stable in the Upper Peninsula, but there’s been an increase in bear abundance in the Northern Lower Peninsula according to our estimates.”

What signs can you look for to tell if a bear has been or is currently in the surrounding area?

“In the spring, you can generally see tracks in the mud. Scat is another good indicator.”

What do you do if you see a bear?

“First of all, it’s pretty unusual to see a bear. They’re very sensitive to humans and don’t want to be around. They have a really good sense of smell and are generally long gone before you get there. You don’t want to try to approach a bear, though. For example, if you’re fishing in May and come across one, put your hands in the air and back away slowly. It’s rare for a bear to be aggressive.”

What should you NOT do if you see a bear?

“Don’t intentionally feed bears. In the spring, there’s not a lot of food like berries or nuts available yet to bears. They feed primarily on vegetation and will go after other food sources like bird feeders. If that happens, you should remove the bird feeder immediately and wait a few weeks before putting it back up. Otherwise, you’ll habituate the bear and it will keep coming back again and again.”