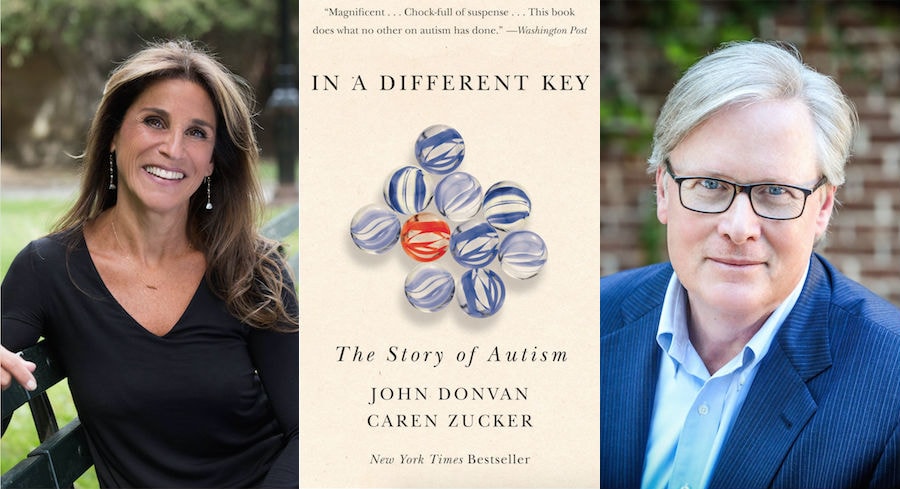 When the pair started covering autism for ABC News in 2000, when the diagnosis was still a novel subject for mainstream media, they discovered all the elements there.

After years of reporting plus their own personal connections—both Zucker’s son and Donvan’s brother-in-law are autistic—they knew they wanted to tell a story that was “more enduring,” as Zucker said, than a minutes-long TV segment.

The result, published in 2016, was In a Different Key: The Story of Autism. The New York Times bestselling authors will kick off the National Writers Series winter season with a live discussion about the book at the City Opera House February 10. Tickets are still available (purchase online, visit the City Opera Box Office or call 231.941.8082, ext. 201).

Spanning eight decades, their story is told primarily through the lens of parent activism, which the authors say should resonate whether a reader is personally affected by autism or not.

“If you’ve ever been a parent who has wanted to stand up for your child in any way, the universal themes are about parents’ love for their kids,” Donvan said.

That universal theme endures through a saga of fractures and fissures, which have characterized the autism community, or lack thereof, since the beginning. Many readers will be familiar with the controversy of a thoroughly discredited vaccine-autism link first posited in 1998. But rancor in the autism ranks dates back decades before that.

“The divisiveness is kind of baked in,” said Donvan, given the subjectivity of an autism diagnosis. No biological markers or genetic tests exist for autism, so someone must always decide who merits the diagnosis. With services and funding often depending on a label, over time, the pendulum has swung from lumping people together, despite vastly different degrees of severity in impairment, to splitting them apart—the separation of Asperger’s Syndrome as a distinct diagnosis—to lumping them back together again.

“The introduction of the spectrum concept, which was really meant as an inclusive concept, has had negative consequences,” Donvan said. “You sometimes wonder if you’re talking about the same condition.”

In particular, the media dominance of independent autistic individuals with seemingly fewer challenges, like Owen Suskind, subject of Life Animated, the 2016 Oscar-nominated documentary, or researcher and author Temple Grandin, who visited the National Writers Series in 2013, overshadows those with more profound challenges. For the latter group, basic activities of daily living, mobility and communication may never be achieved independently. Likewise, the savant-like skills of a minority of autistics become better known than the reality of cognitive impairments, prevalent in as much as 70 percent of the autistic population.

“Their stories aren’t told anymore. The limelight has shifted to those who are very capable,” Donvan said.

That shift has helped to destigmatize autism, but at the cost of a new line in the sand: Neurodiversity. From across that line, the parents Zucker and Donvan herald can find themselves opposed by those who view autism as a mere difference, not a disability.

As autism’s story continues to unfold, the authors are hopeful that the issue of services and assistance for adults with autism can unify advocates.

“The activism of the last 50 years, that we want to honor and bring praise too, moved the ball so much for children, but it hasn’t done so for adults,” Donvan said.

Instead, most adults come to the edge of a cliff at their 21st birthday, when they are no longer eligible for services delivered mostly through schools. (Michigan, however, offers services until age 26.)

“The cliff is very real,” Zucker sad. “We are not used to having adults with autism in the community because most were put away decades ago. It’s employment, it’s housing, it’s acceptance. It really is a million-dollar question.”

Guest host Cari Noga is the Traverse City author of Sparrow Migrations, a novel about a 12-year-old autistic boy that draws on her experiences as a mother to a child on the spectrum.