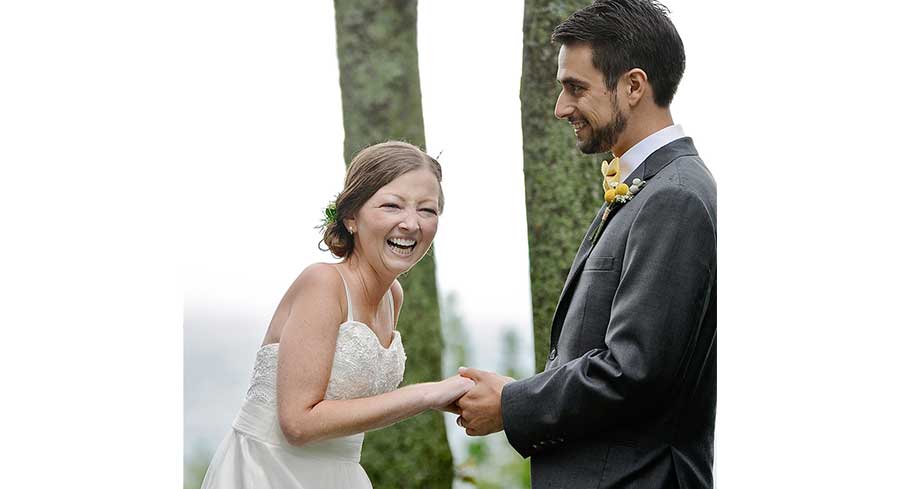 Stefani Pentiuk Thompson has never been one to let circumstances dictate her worldview or her attitude. Not a terrible flu that turned into a heart transplant at age 8. Not a kidney transplant after years of anti-rejection medication. And not acute pancreatitis and months at Mayo Clinic just weeks before her wedding. It is true, Stefani’s circumstances have been plagued with hospital beds and surgeries, medications and caution. But her cheerful faith and optimism, hope and resilience have always rung louder than all the clatter of those sterile operating rooms. And love … well, love rings the loudest of all.

Trevan Thompson and Stefani met at Hope College in Holland, MI. The petite, shy freshman from Leland was having a rough time adjusting and missed home. An outgoing junior, Trevan was immediately drawn to her during a Tuesday evening worship set on campus, and much to her surprise, sought her out later that evening. “Oh my gosh, he’s cute!” Stefani remembers thinking outright. They talked, they went to coffee, they shared heartfelt experiences about their faith and their love for Up North. But it was just friendship—they thought.

Stefani was enjoying digging into her studies as a nursing major and, by all appearances, active and healthy. She had had an incredible senior year at Leland High School, culminating in a once-in-a-lifetime surprise when Dr. Ackerman, Mayo Clinic cardiologist fulfilled the promise he made to Stefani as a scared 8-year-old lying on the operating table: not only would she survive the heart transplant, but Ackerman would dance with her at her prom. Ten years later, he showed up in Leland to fulfill that promise, surprising a shocked and tearful Stefani on the dance floor while Bless the Broken Road by Rascal Flatts blanketed the room.

Ongoing check-ups at Mayo Clinic had kept her in close contact with her team of doctors. And when Dr. Ackerman came to Hope College to present with Stefani on the topic of organ donation, Trevan—now graduated—came back to hear the presentation. From that point, their mutual interest couldn’t be denied. When Stefani graduated, Trevan wanted to visit Leland together. “I always had a crush on him,” says Stefani, “but when he said he wanted to live in Traverse City [someday], I couldn’t help but think even more about a future with him.”

The Reed City native, though, needed to hear what Stefani’s health complications meant exactly. She had defied the odds multiple times; could they hope and dream of a life and a future together? “I live life to it’s fullest,” Stefani told him, laying to rest any concerns that she couldn’t live a normal life. “I feel great,” she assured him. And it was true; Trevan had never even seen her sick. 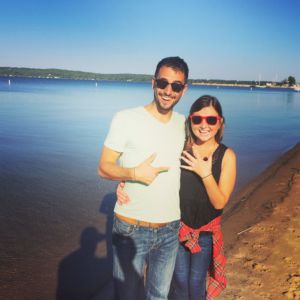 They were engaged that fall and the wedding planning started. Stefani was loving her job as a nurse at the Helen DeVos Children’s Hospital in Grand Rapids but came up north often to visit her parents, Heidi and Perry Pentiuk. By early summer 2016, however, the reality of Stefani’s health vulnerability became painfully clear, and this time Trevan had a front row seat. Up north for the Fourth of July holiday, Stefani was admitted to Munson Medical Center July 3 and then quickly transferred to Spectrum Health in Grand Rapids and ultimately Mayo Clinic in Rochester, MN. Her body grew weaker and weaker as she fought reoccurring acute pancreatitis brought on by her anti-rejection medication as a multiple organ recipient. “Seeing me at my weakest and being so vulnerable really brought us closer,” shared Stefani on how her relationship with Trevan managed. “It was eye-opening for him to be a part of the struggle and still see the positive outcome.”

It was mere weeks before the planned wedding and Stefani was in no condition to leave Mayo much less walk down the aisle. No one knew if the wedding would happen, but Stefani’s hope never wavered. That summer “Trevan saw me at my worst, but we were also able to see God work. If we can make it through that, we can make it through anything,” says Stefani, joking: “we didn’t even need marriage counseling; we just hung out at Mayo together!” 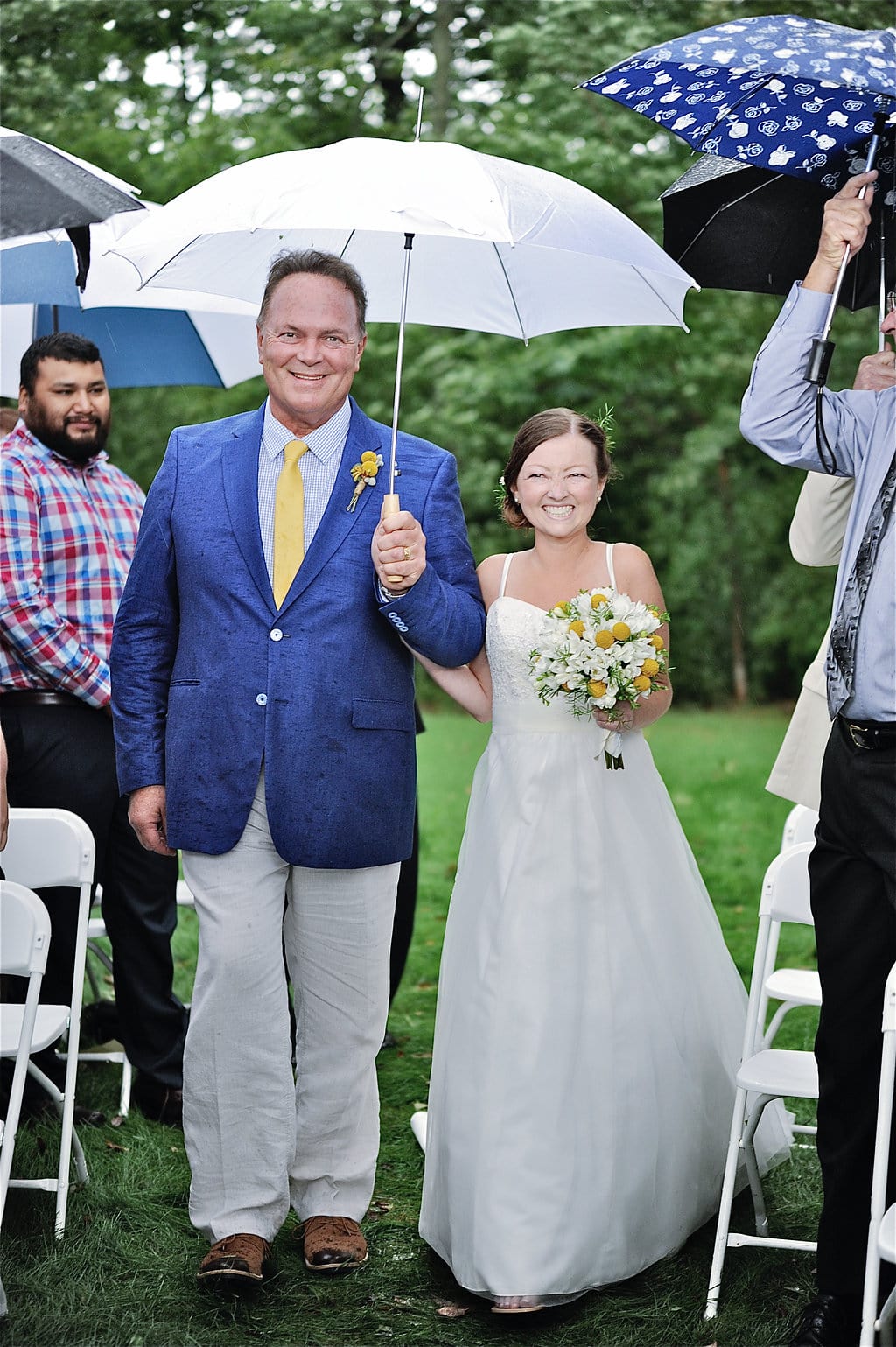 Stefani and her father, Perry Pentiuk, walk down the aisle.

The outpouring of community love for the couple through that summer was astounding. And so when invitations finally went out two weeks before the big day it was no surprise over 150 people came to witness the start of a new chapter for Stefani and Trevan, including all four Mayo Clinic doctors who had treated Stefani as a little girl and through that last painful summer. “They would come by my hospital room over the summer,” says Stefani, “and say they were all coming, and I better get better.” To witness this vibrant young woman get married 17 years after saving her life was a moment none of the doctors could miss. Their presence turned into one of the most poignant elements of the bride’s day.

Wedding jitters and a flurry of last minute details are inevitable no matter how much perspective a bride may have, however. Stefani had lost 20 pounds while at Mayo and was faced with a much-too-large wedding dress two weeks before the big day, valiant efforts by double sided tape and different bras notwithstanding. “I just didn’t want it to fall off!” worried Stefani. Coco Sews in Leland came to the rescue sewing straps on the sweetheart bodice ballgown.

A ceremony site in Leelanau County had already been identified as “the perfect spot,” but it was private property on the otherwise Leelanau Conservancy-owned Whaleback. Luckily, well-known area Realtor and father of the bride, Perry Pentiuk knew the owners who were only too happy to offer it for the ceremony. The Leland Lodge proved to be the ideal spot for the reception with newly redesigned lodging for guests and family as well as a new chef and fun food station ideas. The best part: someone anonymously covered the venue rental.

Things came together for the excited couple, and then the morning of September 10 dawned with spitting rain and gale force winds. “I had been pretty nervous about everything,” says Stefani. “I don’t really like being in the spotlight. We woke up that Saturday and it was a crazy storm—a hurricane in Michigan. We were staying in a little house overlooking Fishtown and the harbor and the waves were crashing so hard.” There was a break in the rain that afternoon, however, and the couple decided to just go for it. The rain had paused, but the wind was blowing with such force, the bride was almost blown sideways walking down the path. Everyone was laughing and hollering, all toughing out the weather together with some comic relief that actually helped the nervous bride. “I don’t know if anyone could hear the musicians but the spirit of love and the power of God was so evident and powerful,” says Stefani. 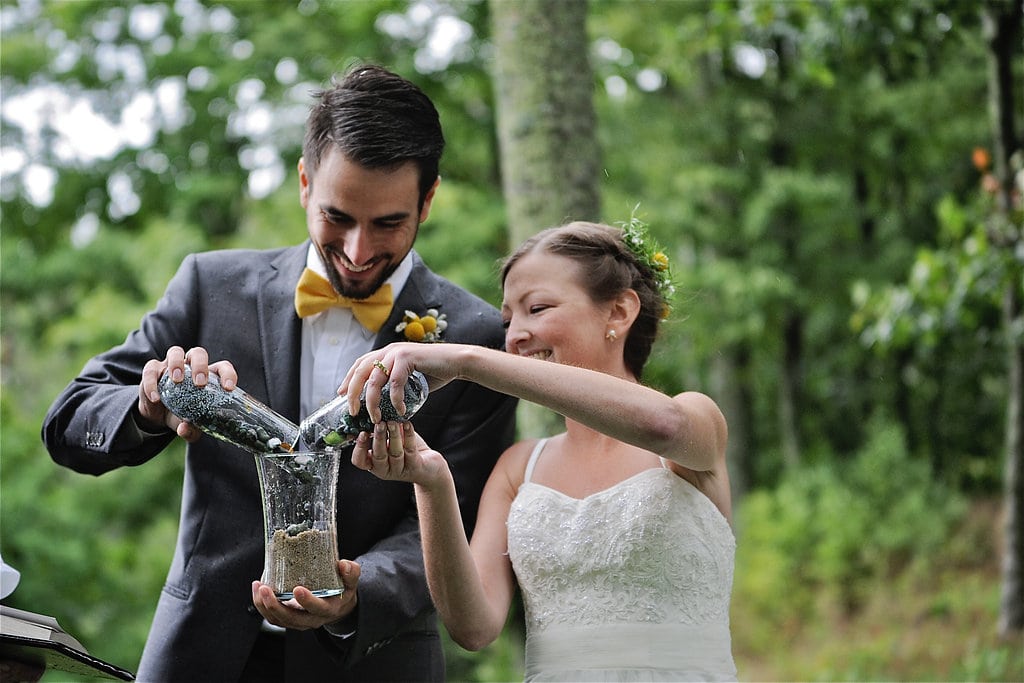 Stefani and Trevan combining their individual collections of Leland Blue in a beautiful Michigan version of mixing sand. 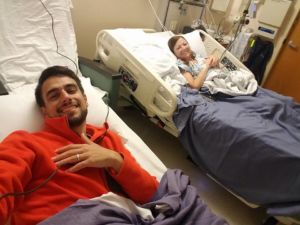 A honeymoon in hospital beds is no newlyweds dream, but Stefani and Trevan still manage smiles.

After the wedding, Trevan and Stefani stayed at a friend’s empty cottage overlooking the Leland Harbor before heading to Wisconsin and the Mayo Clinic for a Monday morning checkup. Stefani, happily married but weakened, ended up getting pancreatitis on the flight to Wisconsin and was quickly admitted back into Mayo for another five days. “It was in sickness and health” immediately, says Stefani. [But] ”I’ve gotten a second chance at life, and I just take every day as it comes. I have been really blessed.”

Martha Washington once said, “The greater part of our happiness or misery depends upon our dispositions and not upon our circumstances.” A more poignant embodiment of that sentiment would be hard to find. Stefani’s wide smile, tender giggle, fighter’s spirit and strength of character have always belied her petite frame and problematic health—because Stefani’s story has never been about the failure of her heart (or any other organ), but always about the triumph of love and faith.