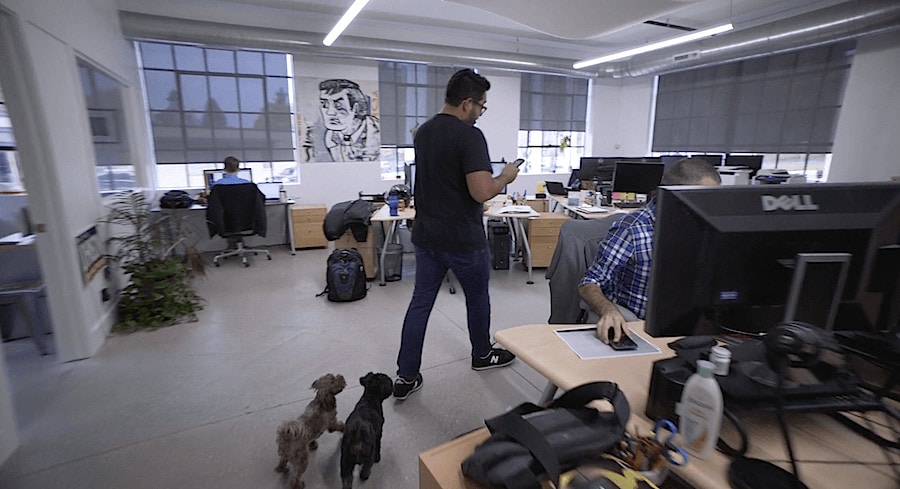 This post, by Groundwork’s Communications Manager Jacob Wheeler, was first published January 5 on groundworkcenter.org as part of the  “New Economy Project”—a multimedia storytelling series that highlights talented millennials in the Traverse City region, and raises awareness about their contributions to the local economy and community. Video and photos by Stone Hut Studios.

Perhaps no one represents Traverse City’s millennial, knowledge-based new economy better than Fernando Meza. A first generation Mexican-American born in East Los Angeles, an advertising whiz who cut his teeth in Manhattan, Meza purchased the innovative digital marketing agency OneUpWeb in 2014 and moved it to a revitalized warehouse in the Grand Traverse Commons.

Meza is a pillar of the diversity that this well-traveled and urbanized American generation seeks (actually, demands) for their neighborhoods and their daily interactions. Despite that—or maybe because—he is a person of color in a largely homogenous white region, Meza says he feels more proud of his Latino heritage here than he would in LA or New York. 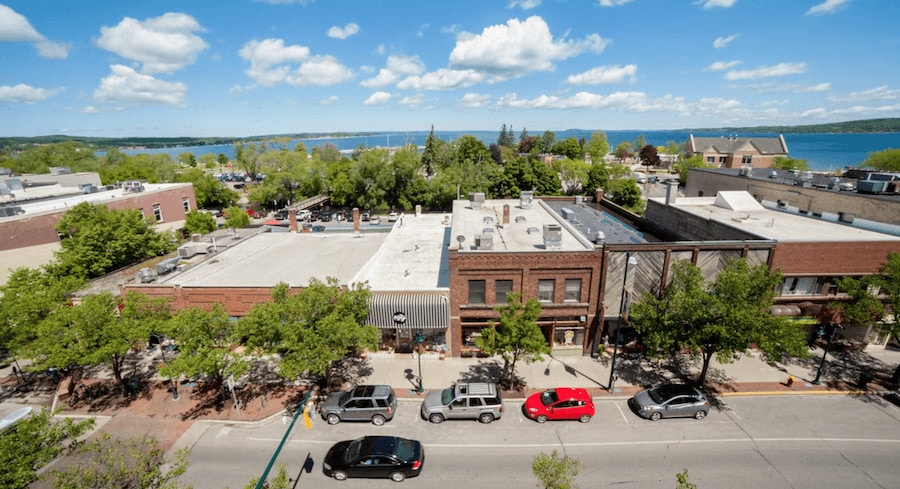 His company OneUpWeb is also part of Traverse City’s growing tech sector, proving that you don’t have to be based on the East Coast, or in a big city, to land advertising clients. However, Meza also articulates where this region falls short in supporting new businesses. Limited Internet bandwidth forces OneUpWeb to store its servers in a suburb of Detroit—money that leaves the community.

Those reasons are why we chose to feature Fernando Meza as part of our New Economy project.

Here’s how he landed here. Meza happened to randomly visit the Traverse City region in April 2011 while scouting out a commercial video shoot for a client. The job fell through, so Meza became a tourist for a few days. He dined at Red Ginger, shopped at Burritt’s (bacon heaven—check it), and drove out to Leelanau County and visited Fishtown in Leland before picnicking on Empire beach. The spring temperature was an unseasonably warm 70 degrees, and he immediately fell in love with this place. At the time he was living in Brooklyn, working in Midtown Manhattan, and growing tired of the competitive rat race. Meza explains why:

“You get up every morning in your small apartment. You walk 10 minutes to get into a subway car that you ride for 45 minutes. Then you have to walk again to reach your building. Then, you sit there all day. Meanwhile, you’ve been working the whole time, while traveling. If you’re not working all the time, you’re (viewed as) crazy. You’re burning the candle at both ends because (after work) you have to go out at night and entertain clients. You realize, ‘Okay, this is not really fulfilling my life in any way’.” 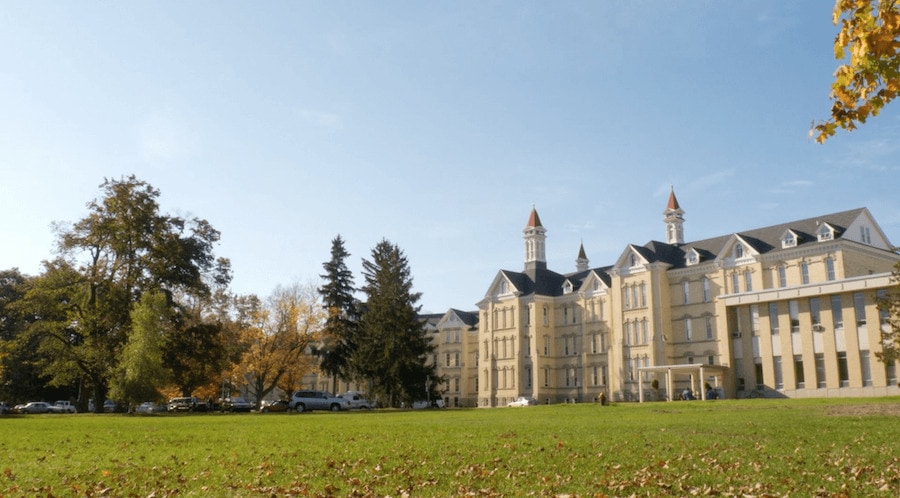 Meza seized the opportunity for a quality of life change.

Meza landed a job with OneUpWeb, which was then based on M-22 in nearby Greilickville (accepted a hefty pay cut compared to his work in Manhattan) and caught a one-way flight from New York to Traverse City on October 7, 2012. He brought three bags with him and rented a room at the Whiting Hotel. Because he knew almost no one in town, Meza began working weekends as a bartender at The Little Fleet.

For a time, Meza felt anxious about being a minority in a lily-white town—both in terms of his ethnicity and his politics. On a blind date, he learned that his companion wasn’t as open-minded toward gay marriage as he was; while working at a beer festival, he overheard locals complaining about “Mexicans invading the area.” He wondered if he’d made the right decision to move here.

But at The Little Fleet, the posh cocktail lounge and food truck oasis on East Front Street, Meza found what he calls “his tribe.” There he met couple Elon and Jen Cameron, local gay rights leaders who were instrumental in organizing Traverse City’s pride movement—last year our town hosted the largest Pride Parade in the state. (Get a taste of the restaurant and the community.)

“Little Fleet has created a community gathering place for people like us,” Meza says. “I have never in my life been so empowered in my background, in my culture, as I have living here.

“I have a voice that can be heard here. There are people who are trying to come together right now to promote a culture of inclusion and diversity. In many ways, I feel like this is ground zero for many conversations that are happening across the country.” 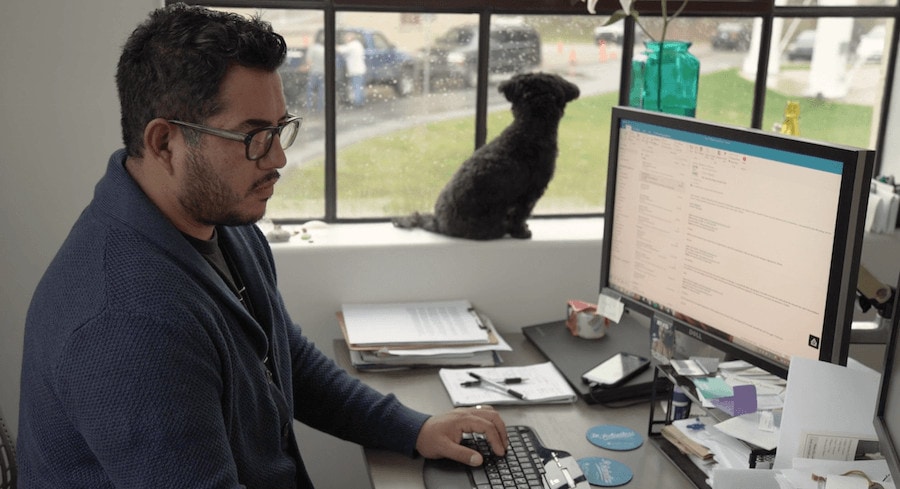 Two years after moving to Traverse City, in October 2014, Meza (35) acquired OneUpWeb from company founder Lisa Wehr. The next year he moved it to the Village at Grand Traverse Commons, on the campus of the former Traverse City State Hospital. OneUpWeb currently boasts a staff of approximately 30 employees, most between the ages of 25 and 36, and a young and active office culture that includes a ping-pong table and miles of walking trails in the forest behind the building. Meza often brings his dog with him to the office.

Meza describes OneUpWeb as a full-service marketing agency that specializes in brand development, website design, content marketing, and paid and organic search marketing. Ninety-eight percent of the clients are based outside of Northern Michigan.

“We deal with everything from multinational, billion-dollar corporations to an entrepreneur working out of his garage. It’s an exciting (location) that we’re in,” he chuckles. “Just outside our office, there’s a coffee bar, restaurants, a yoga studio, cider, and beer.

“In one moment, we’re sitting here having a conversation with a leadership consultancy in Wales. And then we can unplug and take a walk in beautiful woods less than 100 feet from our office door. I can’t think of a better place to have our business.”

Still, the lack of excellent Internet infrastructure poses an impediment to growth.

“The thing that I want to see here is more investment in technology to help bridge the gap with current broadband zone deserts. I have to host my company website servers in Southfield because I don’t have the bandwidth to do that here. That’s revenue that doesn’t stay here, and that I can’t invest in my own business, and it’s money that goes somewhere outside of Traverse City.”

Despite the challenges, Meza is thrilled to be here, helping Northern Michigan embrace its new economy. He and his wife Arminda live on a forested hill between Traverse City and Suttons Bay, with a breathtaking view of West Grand Traverse Bay.

“There’s currently a resurgence of people coming from all areas of the country and the world to promote a more active economic scene in Traverse City. It’s very exciting to be a part of,” he says. “Traverse City is creating a model that can be exported to other communities that are struggling to become more diverse, more appealing and attract more talent. There’s no other place that I’d rather be growing roots.”

For more on the New Economy Project, check out the video, “Back to the Land: Farmer Jess Piskor & Leelanau’s Agricultural Economy.”