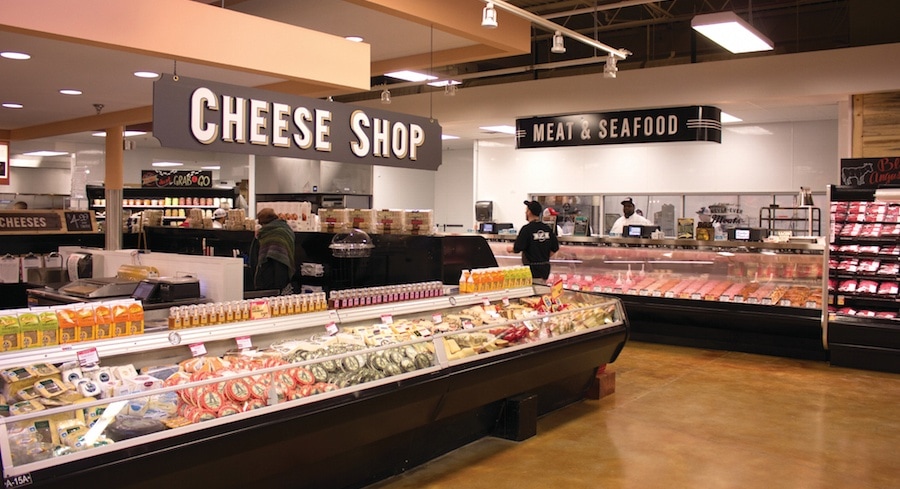 It’s almost here. Natural foods grocer Lucky’s has finally set an opening date, and it’s less than two months away. While prospective customers are certainly looking forward to the doors opening, for new store director Jim Mick, March 22 really can’t come soon enough. After all, he bought a home in Interlochen a year ago in anticipation of a 2016 opening. “We’ve been running up on weekends,” he says.

The store was originally intended to debut last year, but delays ensued, including a denial of permits, which led developer Joe Sarafa to sue Garfield Township. Those issues have been addressed and the store is once again on track. When completed, it will include both a host of grocery items, fresh meats, seafood and produce, a bakery and a number of ready-to-eat meals, made from scratch daily inside the store, as well as fresh grab-and-go sushi options. The approach stems from the store’s roots, when chefs Trish and Bo Sharon bought a convenience store in Boulder, Colo. The Sharons envisioned a grocery store where food lovers like themselves would want to shop.

Mick says that approach is what appeals to him as an employee and what he believes will entice shoppers. “Lucky’s is a fun store to shop at and a fun place to work,” he says. No doubt he hopes that fun translates into a full team soon, since the store will have a roster of 150. At this writing, he has three, including himself. “I’ve got 147 to go,” he says with a laugh. “I’m booked solid for the next two weeks. I’ve got a lot of applicants.”

Mick is a Michigan native with 30 years experience in the industry, most recently as store director for the Ann Arbor Lucky’s Market. Prior to that he worked at Whole Foods. So he’s familiar with the appeal of a natural food market. And yes, he’s checked out the competition locally, from Oryana and Edson Farms to Toms, Olesons and Meijer. “We’re coming in to add to the community,” he says. “I think it (the competition) will make us all better. We’ll have to be sharp, they’ll have to be sharp. We’re excited about the opportunity to provide good food at good prices.”

Lucky’s is looking at ways in which it can set itself apart. Customer service is a big key for the entire chain, according to Mick, as are its unique offerings: House-smoked bacon and house-smoked sausages, a large gluten-free section (“An important segment of the community,” says Mick), and a cheese island with cheeses from around the world will be among the store’s staples. Its apothecary department will feature a bulk DIY wall, where people can buy what they need to make their own teas, salves, tinctures, healing elixirs and more. In addition to soaps and candles made by local artisans, customers will find natural remedies and mainstream medicines.

Lucky’s Market was founded by the Sharons in 2003. The chain now includes 23 other stores across the country, with three in Colorado and eight in Florida, and others scattered mainly around the Midwest. Despite its corporate heritage and size – it will encompass 28,000 square feet – Mick says the new store will share aspects of neighborhood groceries and farmers’ markets. “We’ll build relationships with local vendors and local farms, have the best of local foods.” It will offer an open air section, with “two large doors open as long as weather permits, for the feel of a farm market,” he says. That approach will extend to the café, which will offer both indoor and outdoor seating. In addition to fresh juice, smoothies and coffee, customers will also be able to purchase a glass of wine or craft beer, and then wander the aisles. “You can walk around the store, sip and shop,” says Mick. “Shopping can be a chore, but not if it’s a community.”