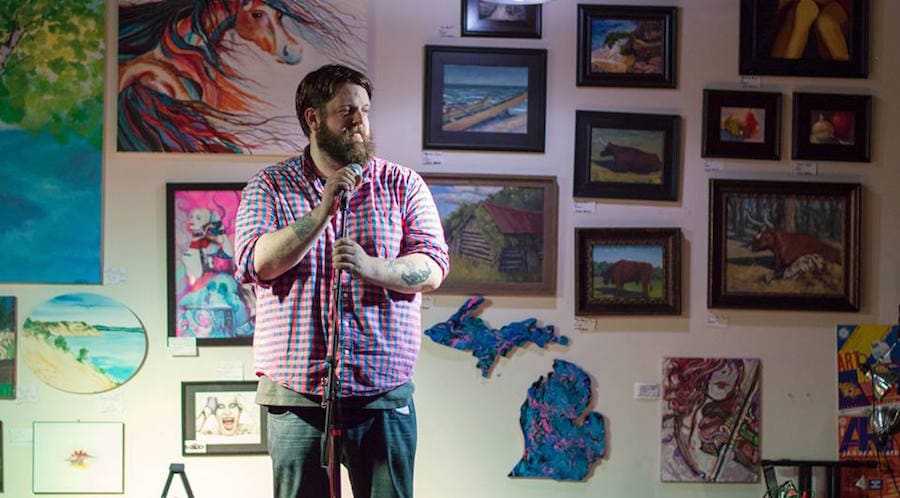 The opening line on the old TV game show Make Me Laugh found the host introducing the comedians, then saying, “Go ahead. Make me laugh.” Then the three comics would do their best to make the contestants bust a gut while said contestants strove mightily to hold it all in.

Fortunately, local audiences are more amenable to laughter, and there’s no doubt the folks behind the microphone are doing their best to make the audiences giggle and guffaw. People like Jeremy West, whose “real job” is as a prep cook, but who embraces making people laugh as a way to bring himself joy. “I host an open mic. That’s the ground floor of comedy,” he says. “That’s where most people start.” The open mic takes place at the Workshop Brewing Company in Traverse City’s warehouse district on the second and fourth Mondays of each month. West will typically give each comedian between five and ten minutes, depending on the number of performers and their level of experience. For first-timers, five minutes is usually plenty long.

Sometimes West performs; other times he simply acts as the host, based on how many comics show up. “Maybe I’ll do ten minutes at the top of the show. It depends on how many there are. There’s been as few as six. Last Monday we had 17 people, and there was no time for me.” West himself is more likely to do his own thing at one of the other local shows. “I go on Dave’s show,” he says, referring to fellow local comedian David Graves.

Graves, like West, has been performing locally for the better part of four years. He puts on shows across the state, venturing as far south as Bay City, even across the pond to Wisconsin. He hosts shows at Studio Anatomy, downstairs in the old Arcade in downtown Traverse City, and at the Parlor on Eighth and Cass. “We’ve had a cool response. We’ve given 100-some people stage time,” he says of his company, Falling Down Stairs Productions. 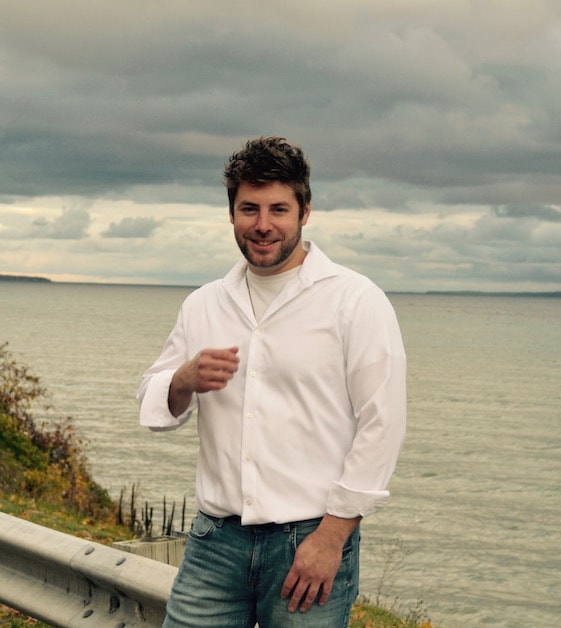 Christopher O’Non is another member of the comedy community. His Uncorrect Comedy productions books touring acts, and he himself recently opened for Dave Landau at Streeters. He says bringing in comics to the right venue at the right price is key to gaining an audience. “When I throw a comedy show I try to find the ideal place for the people sitting in the seats. Old Town Playhouse has great seats now. The same with Streeters,” he says. “I saw Ron White at the Michigan Theatre in Ann Arbor. It was super expensive, and to get up and get a drink, everybody in my row had to get up.”

He admits that finding comedy work “Up North” can be a challenge. “There’s not as much opportunity in Traverse City as Grand Rapids, Detroit or Chicago. But I think there’s never been a better time. Local talent is growing.”

The comedy scene includes more than just a single person standing behind a microphone telling jokes. Good On Paper Improv is a local comedy troupe in its seventh season, which performs with the same cast as when it started, with one addition. The group performs 90 minutes of improvised sketch comedy based on audience suggestions, similar to Drew Carey’s Whose Line Is It Anyway? “Every show is different,” says David Avis, one of the founders of the troupe. Avis credits a class he took at Second City in Chicago many years ago with laying the groundwork for his fascination with comedy.

Good On Paper Improv started at Old Town Playhouse, before moving to Inside Out Gallery, and when that closed, to Ecco. Now, with that venue also shuttering its doors, the group is looking for a new home. It most recently performed at The Circuit. “The biggest challenge is it seems the larger the audience, the smaller the opportunities,” Avis says. The group embraces all styles and other comics as well; it recently hosted an improv class which many of the members of the local comedy scene attended.

Graves and West estimate there are ten to a dozen regulars at the open mics, those really trying to make a go of comedy. West says there are probably 20 or so “hobbyists” who also filter in and out of the scene. So why do they do this crazy comedy thing? “It was a dare,” says Graves. Besides, he says, “It’s really great stress relief. It’s great therapy.”

Of course, there have been plenty of comedy shows in Northern Michigan over the past several years. Interlochen has hosted Bill Cosby and Jay Leno. The City Opera House has brought in Kevin Nealon, Lewis Black and Lily Tomlin. The Cherry Festival’s closing show this past summer was Gabriel “Fluffy” Iglesias. And for years, the Winter Comedy Festival brought in big names like Bob Saget, Sinbad and Bill Maher, before going dark.

West says the Comedy Festival’s closure was disappointing. “When it went out, that took away the chance to see some top level comics,” he says. Yet it also presented an opportunity. “If they’re not going to put on a comedy festival, then we’ll have to do it.” That resulted in several local shows around the time originally set for last year’s festival. And now that trend is continuing.

What’s next? It’s a safe bet the larger venues will continue to bring in touring comics. But for those on the local scene, audience members and performers alike, the hope is the art form will continue to prosper and grow. Most of the comics, companies and/or venues have shows on their calendars and/or Facebook pages. “It’s been uplifting to see more places wanting to give it (comedy) a try,” West says. “I’d love to see a dedicated comedy club,” though he admits that that may be a way off. “I think we have a lot of groundwork to do.”

Photo(s) by Falling Down Stairs Productions