Go Back in Time to the Cretaceous Period with Dr. T-Rex and Rexie 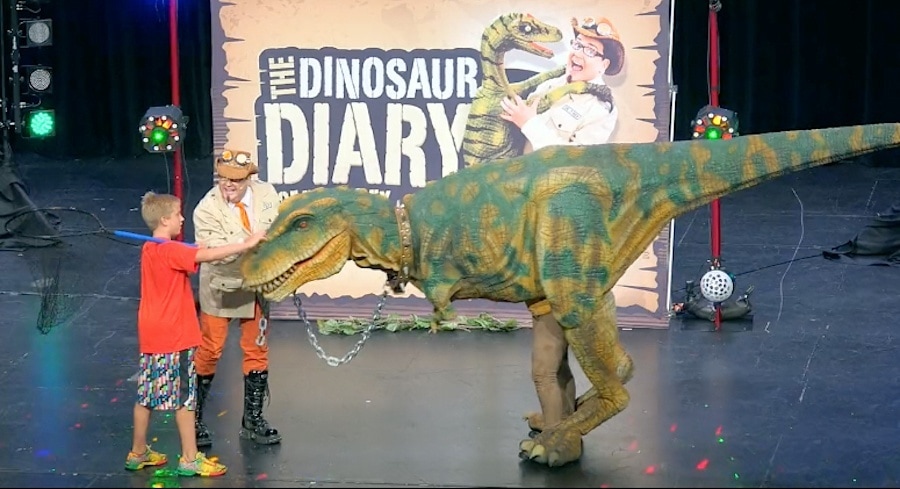 The Dinosaur Diary of Dr. T-Rex is a fast-paced, upbeat and interactive show with surprises and thrills at every turn. The inimitable Dr. T-Rex focuses on the Cretaceous Period, taking the audience on a tour through the Mesozoic Era—the Age of Dinosaurs. His wacky Dinosaur Diaries use hilarious comedy, life-size puppets, and real fossils to encourage kids of all ages to continue exploring the world of dinosaurs. Watch them walk and hear them roar as the greatest creatures ever to walk the earth return to the Kirtland Center for the Performing Arts.

Dr. T-Rex, the well-known authority on the Mesozoic Era, the Age of Dinosaurs. Along for the fun will be Rexie, a real, live (well, not really) Tyrannosaurus Rex.

Rex first appeared about 170 million years ago, in the mid-Jurassic Period. Back then, the tyrannosaurs were human- to horse-size. Fast forward a few million years, and the Rexes had grown to a height of 16 feet, 42 feet in length, and four to six tons in weight—the largest apex predator on the planet. It ruled much of North America. And who would argue? T. Rex towered over most of the rest of the dinosaurs, and its mighty jaws exerted the strongest bite force of any terrestrial animal that has ever lived.

Teachers rate the show highly because Dr. T-Rex encourages students to continue exploring life science and natural history through reading and writing. He appeals to kids because of his wacky, off-the-wall sense of humor and shenanigans, not to mention a little bit of magic.

Rexie is anatomically accurate and realistic, and despite the dinosaur’s fearsome reputation, she’s a gentle dino. This puppet (spoiler!) stands over eight feet tall and 12 feet long. Imagine the excitement as her handler leads Rexie on a leash from one area to another, with crowds of enthusiastic children, teens, and adults following along. Hey, doesn’t everyone want to be friends with and take a selfie with a real live (sorta kinda) dinosaur?