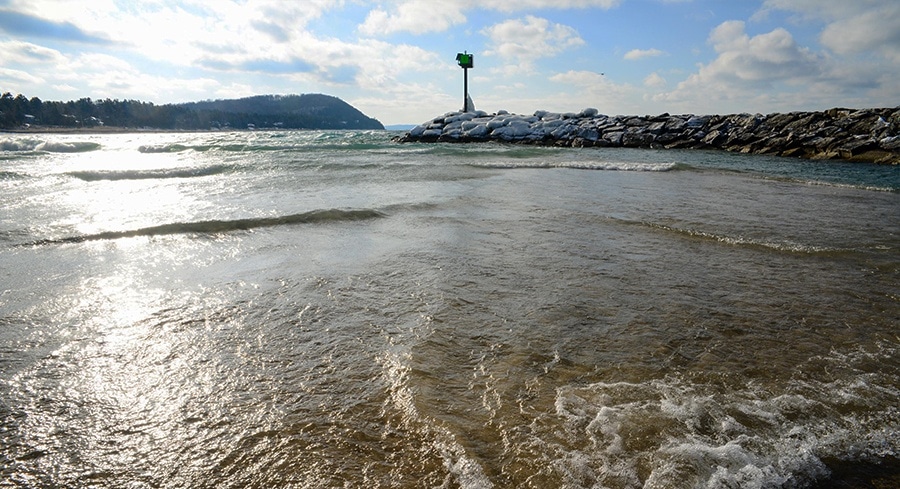 To many, the Leland Harbor is the heartbeat of one of the most picturesque destinations in Leelanau County. Imagine Fishtown without the summer bustle of one of the most popular boating and fishing ports in all of Lake Michigan. Imagine it without the steady churning blue behind the Manitou Island Transit ferries, without the flash of hastily battened down sails or the gape-worthy aura of shiny white hulls. Imagine no commercial fishing, no recreational fishing charters, no Carlson’s Fishery.

Every year this harbor that is a critical component to Fishtown and to Leland’s economy and history accumulates thousands of cubic yards of sand and sediment and requires annual dredging. Federal funding, which historically was earmarked for the harbor of refuge, has slowly dried up leaving the Leland Township Harbor Commission struggling to secure the federal money necessary to keep the harbor open. The last couple years it has been a losing proposition; the Leland Harbor hasn’t been dredged since 2014.  Right now, sediment has made what should be 14 ft. water depth only a few inches—you can wade all the way across the entrance and barely get wet ankles. According to Harbormaster Russell Dzuba, January storms sealed the deal, making the Leland Harbor impassable to anything beyond a kayak or dinghy. 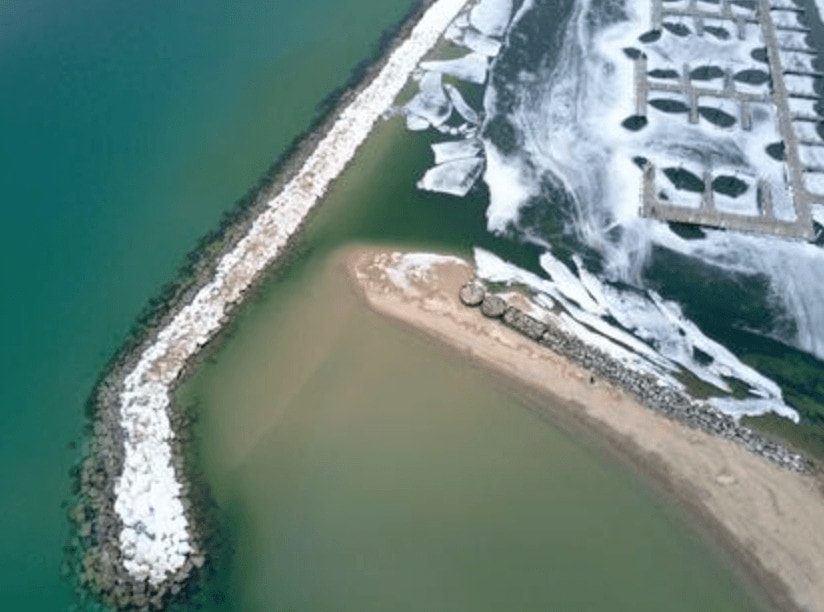 But there is hope in that beautiful Lake Michigan horizon. Where the state and federal governments have failed to keep up their obligation, harbor lovers from near and wide have rallied to a crowdsourcing effort that now exceeds $200,000 toward a proprietary dredging operation to be run by the Harbor Commission themselves.  (Want to participate in this groundswell of support? Donate here.)   Read on to get the details.

Since the Leland Harbor’s construction in 1965, it has been dredged 47 times to a tune of nearly 3.5 million dollars. For the first four decades federal funding was allocated to the US Army Corps of Engineers (ACOE) to ensure the harbor was accessible in all weather conditions; 10 years ago, those earmarks dried up and Leland had to start fighting to obtain a portion of monies from ever-dwindling funds to ensure the harbor was dredged. Each year that struggle became more intense and the annual singular focus of the Leland Township Harbor Commission. Last year the ACOE had no funding to dredge the 18,000 cubic yards that their annual bathymetric survey concluded needed to be removed from the harbor, and this year, the Harbor Commission was told there was “no chance” funding would be made available in 2017. In the past, the Commission had to pay over $100,000 to dredge the channel themselves, but faced with the real question of sustainability, could conclude the only answer would be to not rely on the whims of state funding at all but to purchase their own dredger. 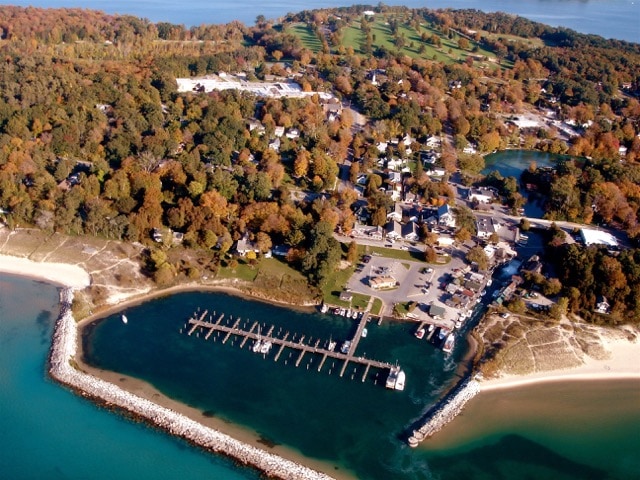 From the effort’s fund.ly site, that possibility is now well within reach with over $203,000 raised as of February 6. “I did not expect to be at this point,” said fundraising coordinator and local Riverside Inn owner, Kate Vilter. “I am shocked and humbled by the community coming out and supporting this. This is a 30-year fix for a problem that we have been struggling with for a decade now.”

Though the initial fundraising goal was $200,000, the committee’s new goal of $250,000 would make a big difference with the sustainability of the project, including the need for a tender (estimated at $50,000) and a trailer (estimated at $100,000), which would allow better storage of the dredger and alleviate other capital expenditures. The full price tag of the dredger from DSC Dredge in Green Bush is estimated at $500,000. The balance will be paid for through the Harbor Commission’s reserves. (Get the full breakdown of the plan and the due diligence that was done here.) 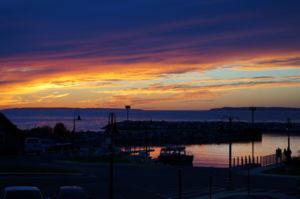 The dredger must be ordered by the end of February and brought to Leland from Green Bush, Michigan by April in order to open the Harbor by the May 1 timeline. Dredging is estimated to take between 7–10 days. The Harbor Commission has received nearly a dozen phone calls from individuals ready and willing to operate the dredger; ultimately 4–6 people will be trained to operate it. “They can’t afford to give a thousand dollars, but they can give their time,” says Vilter describing the enthusiasm from a wide demographic of the community.

Linda Lindquist-Bishop is part of the very fabric of Leland’s community. Every summer in her youth, she, her brother and mother would board the Manitou Isle or Pete Jurica’s lumber barge for a North Manitou Island getaway. Two weeks of remote island magic with “Merc” (Leland Mercantile) groceries to sustain them and boundless adventure awaiting. But as much as they looked forward to this escape every summer, it was returning home via the Harbor that really sticks out in Lindquist-Bishop’s mind—the welcome sight of the Harbor after a rough crossing: Fishtown, the Dam, and friends waiting on the dock. 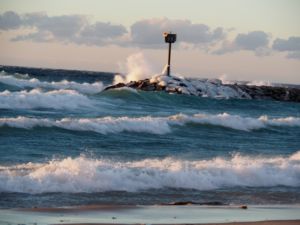 “Watching the winter waves pummel the breakwall sending plumes of white water 10 feet over the top of the rocks is as awe-inspiring as the summer sun setting over the Islands,” says Lindquist-Bishop.

As a life-long sailor, Lindquist-Bishop has often raced past Leland Harbor on the way to Mackinaw City, and counts as one of her greatest memories launching a small 2-man 470 (a planing dinghy) with her brother down the Leland Harbor ramp into small craft warnings and 4-6 foot Lake Michigan swells. “It was crazy, exhilarating and wild,” she recounts. “A few hours later we blasted through the mouth of the Harbor with our hair on fire to the cheers of some and stern looks of others.  It was an afternoon we will never forget.”

Though most adventures surrounding the Leland Harbor may not be as hair-raising; thousands and thousands of summer visitors and year-round locals alike treasure very clear and poignant Leland Harbor memories. “Critical” is what most call the Harbor to a Leland downtown experience, and judging by the feedback so far in this fundraising effort, there is little dispute.

“I’ve been so overwhelmed and encouraged with the amount of community support that has come forward—from near and far—for this project,” says Lindquist-Bishop. “Leland Harbor provides not only transportation, dockage, gas, charter fishing boats, ramp access to the water and a safe port for all vessels—but it also creates memories, joy and beauty. Whether it’s watching a sunset – ice cream cone in hand, walking the docks after dinner or getting on a boat and leaving Leland to pursue other adventures, the Leland Harbor is a source of great pleasure, as well as a critical infrastructure, to our town.”
Do you want to donate to this effort?  Click here for the Fund.ly site to give online or send a check to: Leland Township (memo: Harbor Dredge) PO Box 347, Lake Leelanau, MI 49653. Be a part of preserving Leland for generations to come.