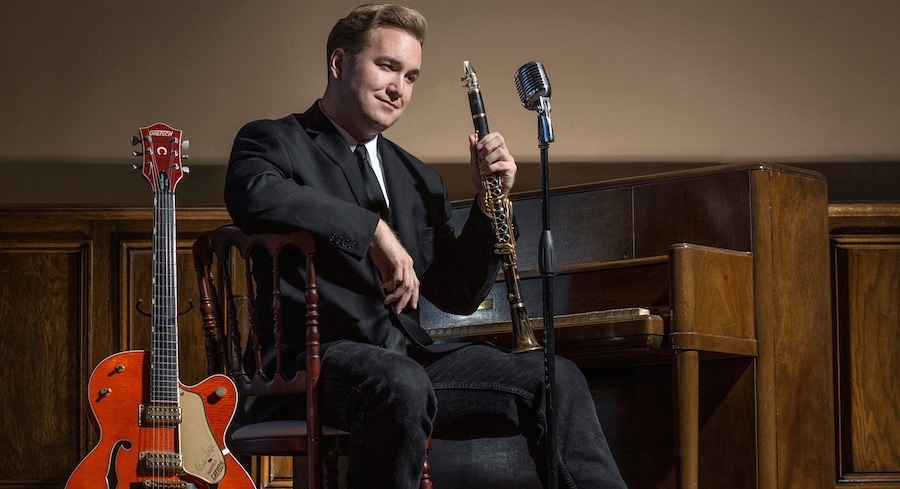 It’s a safe bet the King of Swing was not influenced by Elvis Presley. Or Jerry Lee Lewis. Certainly not Alice Cooper. No, Benny Goodman was one of jazz’s pioneers, his clarinet playing and swing sound the furthest thing from Presley, Lewis and (gulp) Cooper.

Enter Dave Bennett. Like Goodman, he’s a bespectacled clarinet player and credits Goodman with being his first musical influence. But he also plays a mean boogie-woogie piano like the Killer, and the self-taught guitarist pays homage to Johnny Cash and Elvis in shows as well.

It doesn’t stop there. “I was listening to David Bowie with my clarinet. I realized some of his harmonies could be used in a different way,” Bennett says in a phone conversation from his home in Waterford. Of other influences, he says, “I’m a huge Phil Collins fan. Jimi Hendrix, Stevie Ray Vaughan, Alice Cooper—‘Halo of Flies’ has this really distorted guitar riff that starts it.” 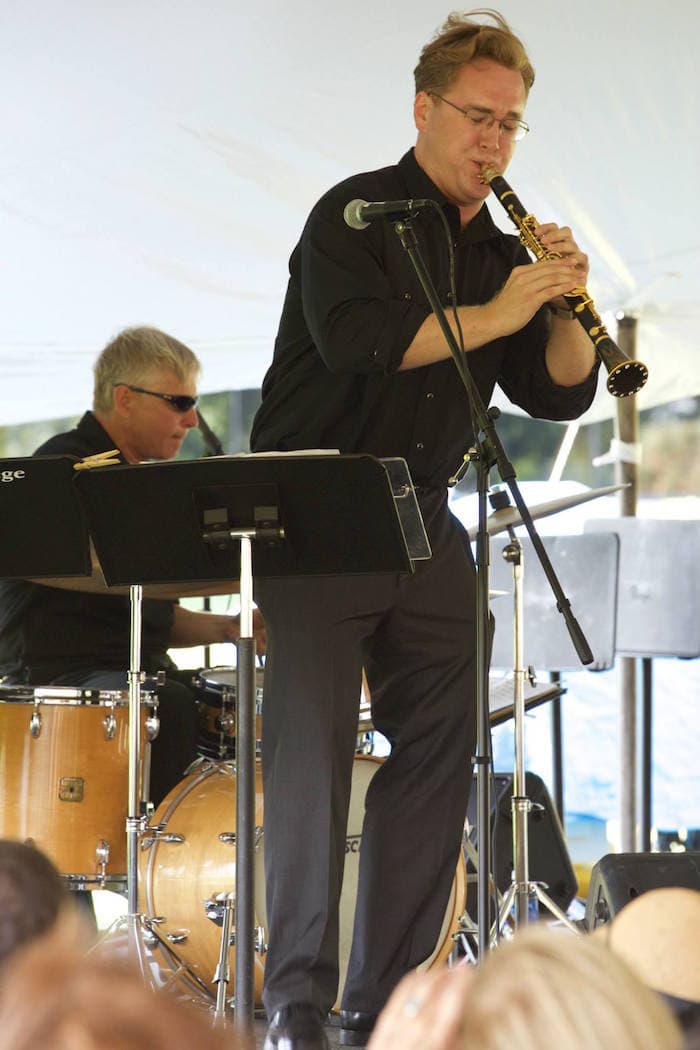 Those fearing he might break into “Smoke on the Water” in the middle of his upcoming show in Petoskey needn’t worry, though. Bennett knows better. “That wouldn’t go down with the audience,” he says with a chuckle. No, his “Kings of Swing” show is all about the clarinet and the sounds pioneered by the likes of Artie Shaw, Jimmy Dorsey, Woody Herman, Pete Fountain and Goodman. That’s where Bennett’s musical story really begins; when he was a youngster trying to decide on an instrument to play for elementary school band. “My grandpa said, ‘I think you’d have fun with a clarinet.’ He bought me a clarinet at a pawn shop and a Benny Goodman cassette. I realized that’s what I wanted to do with my life,” Bennett says.

He absorbed the style as quickly as he learned the instrument, practicing six or seven hours a day. But while grandpa initially had his way, Bennett’s parents suggested he give a listen to rock music, and eventually he dug out one of their Elvis Presley albums. In seventh grade, he discovered Jerry Lee Lewis—“That rocked my world,” he says—and from there it was on to the hard stuff: Hendrix, Stevie Ray Vaughan and Double Trouble, Brian Setzer and the Stray Cats. He picked up piano, guitar, even drums (that Phil Collins influence). Even while incorporating all that into his music, he remained true to his swing jazz roots. He was invited onstage at New York’s famous Sweet Basil jazz club by trumpet legend Doc Cheatham at age 12, and by 14 was touring with the New Reformation Dixieland Band.

Today Bennett leads his own bands. In his jazz shows, rather than covering tunes by the likes of Hendrix or Genesis, Bennett is more apt to subtly incorporate their influences into his clarinet solos on traditional songs like “St. James Infirmary” or “Sing Sing Sing.” He’s released one album on the Detroit-based jazz label Mack Avenue and has another nearly ready to go, featuring some of his own compositions. “I hope to be known for my own music. I’ve got my own story to tell,” he says.

At the Petoskey performance, he’ll be accompanied by piano, bass and drums.

“If anyone can return the clarinet to its heyday, it’s Dave Bennett, who fuses serious jazz improvisation with a host of modern pop influences.” – Mack Avenue Records

“Clarinetist Dave Bennett’s Don’t Be That Way is a throwback album, but it’s not a carbon copy of what’s come before. Bennett certainly finds inspiration in the work of past masters, driving down the highways and byways that have been paved by Benny Goodman, Artie Shaw, Woody Herman and others, but he’s willing to look at their music with a fresh set of eyes. This crew makes wonderful music that recalls the past but lives in the present.” – AllAboutJazz.com