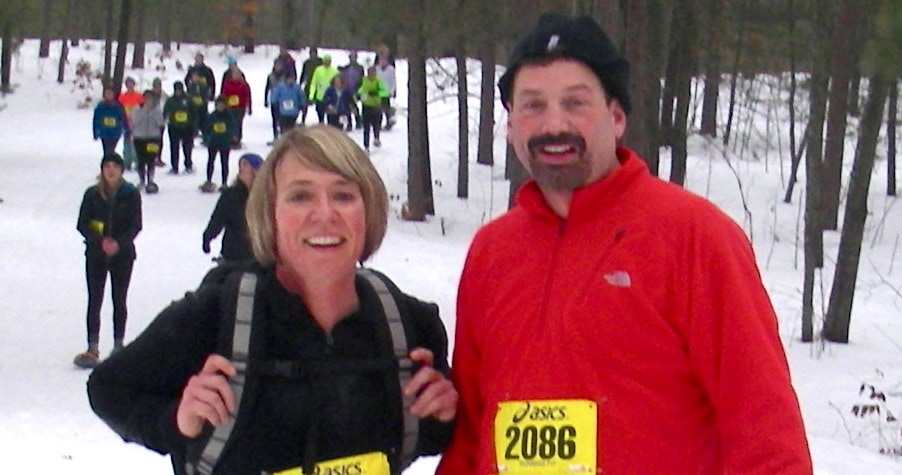 The thunderous sound of 1,150 Bigfeet pounding along a pristine, wooded trail, greeted race director Jen Teeples as 575 snowshoers/runners headed down the trail in the Bigfoot 5-10K Snowshoe Race, at Timber Ridge, Traverse City, Saturday, Jan 21, 2017, sponsored and timed by the Running Fit organization. Was this the largest snowshoe race in the Midwest? It sure seemed to be. These snowshoers were serious and fast.  This event was no hike in the woods. This was a no-holds-barred race to the finish. Where were you? If you come next year, you will be the beneficiary of 40 gallons of hot white chicken chili, regular chili or vegetarian chili provided by Toni Dye, and Jeff Pownell of Slabtown Burgers, located on the west end of Front Street, Traverse City. MMMMMMM good!  Maybe next year you will join us after you read about the following “winners” who changed their lives through exercise.

Meet “winner” number one, and our selection for overall race “winner.” Elizabeth Nikel of Grayling, lost 151 pounds and stopped smoking. She has another  50 pounds to go. She has low blood pressure after suffering from much higher blood pressure. Elizabeth’s family has a history of diabetes and weight problems. How many of you can relate to Elizabeth’s story? She may not have been the fastest, but Elizabeth is a “winner.”  Meet “winner” No. 2, Dan Mosher, 66, from Farmington Hills. Dan had prostate cancer last summer and experienced radiation treatments. He’s not sitting at home feeling sorry for himself. He is out racing with others. Furthermore, Dan spent money and helped the local economy by staying in a motel for four nights. David Best, 61, of Howell, recovered from shoulder and knee surgery. Way to go, David. Shelly Jewell, 48, of Grand Rapids, loves to be outdoors. Wendy Ogilvie, 57, of Grand Rapids, tried snowshoes for the first time. Exercise helps her “deny her age and be around others who believe in good health.” Wendy stayed in a motel two nights bringing money into the area.

Robert Crowe, 48, of Lake Orion, entered his first snowshoe race at the Bigfoot. He says, “The race was the longest, hardest 5K” he has ever run. He’s no rookie. Robert has run many 5Ks and a few marathons. He plans on entering his first triathlon next month. Robert has an important message to share. In addition to losing 30 pounds and dropping his resting pulse and lowering his blood pressure, Robert says running saved his life. Robert was suffering from depression. Exercise and the friendship of a running group helped him survive his depression. “Give running a try,” Robert says. “Don’t be surprised if the effort is difficult when you start. Even marathon runners have trouble with the start of a workout. Just keep going and the effort will get better.”

Tom and Cathy Neal, both 73, from Farmington Hills, have been running since 1975. He suffered a heart attack in 2012. Heart attacks are a heredity challenge for his family. Tom is using exercise to avoid a family history of heart attacks. Tom is also a competitive master swimmer. Robert Bell, of Dayton, 81, stays in shape through exercise. He has run for over 30 years and has never suffered a serious illness. He must be doing something right. Tim (49) and Mellonie (42) Edwards, of Imlay City, are members of the First Generation Cross Fit Club. Mellonie lost 35 pounds. The Edwards came to TC with about 40 Cross Fit Club members. They stayed two nights in a motel providing a big economic benefit to our region. Marilyn Freeman, 62, of Swartz Creek, is a healthcare worker and knows the importance of the stress relief running provides her. She has run in seven states and seen the beauty of these areas because she is a runner. Amy, (33) and Simon, (39) Millbrandt, are Marilyn’s niece and nephew. Both are health-care workers. Both have experienced the results shown by “unhealthy” patients who do not exercise.

Kathy Step is a “winner.” Kathy, 60, of Ann Arbor, knows of what she speaks. Kathy is a doctor of nursing. After a nursing career spanning 38 years, Kathy now teaches her profession to other nurses. Kathy speaks from a professional perspective. So here are the benefits of running/exercise as told by Doctor Kathy: helps keep a normal psychological life, become more social, be physical, mental health is improved, avoid diabetes, drop blood pressure, avoid depression, avoid isolation, increase the ability to enjoy all activities. Now you know the “secret” of why we enjoy exercise.  Kristy Laferty, 39, of Ann Arbor, ran much of the race with Kathy. Kristy lost 15 pounds, dropped her blood pressure, decreased anxiety and has enjoyed fun with friends.  Wanda Hancock, 61, from the Soo, was a top finisher in the Bigfoot. She has completed 53 marathons and several ultra-marathons of 100 miles. Running helps Wanda achieve peace, calmness and well-being. She met her husband, Fred, 63, at the Pikes Peak Marathon. Fred has also run ultras. Today, they both ran the 10K.

Perhaps one of the more interesting folks in the race, yes, he ran the 5K, was Fred Jackson, 55, of Ann Arbor. Fred is the “Zero Waste Director” for the Bigfoot Race as well as other races conducted by Running Fit. After the race, Fred and his crew will collect the 100 pounds of waste and process it into specific waste streams. Compost will be given to Carter’s Compost, a local 11-year-old who has started a composting business. Recycling will be given to a local waste company. Of the total 100 pounds about 20 pounds will remain to enter the landfill. Is this the first race in the area to process waste? Will more races follow suit?

Results of the 2017 Bigfoot can be found here.

Jen Teeples would like to see you at next year’s Bigfoot. Please join the fun and good health. Remember to ask your doctor before starting an exercise program.

Mickey Fivenson, 74, of Traverse City, is a stroke survivor. Mickey’s doctor credits running for his survival. He is the former director of the National Cherry Festival Races. Mickey founded the Cherry Festival Golden Mile and Wheelchair Races. He has completed over 60 marathons and holds a marathon record with sons, Zack and Adam. He has trained 150,000+ miles in 48 years of running. If you’d like tips on running, on marathons, if you have a story to share how running has impacted your life, or if you would like coverage of your race, contact Mickey through the editor.