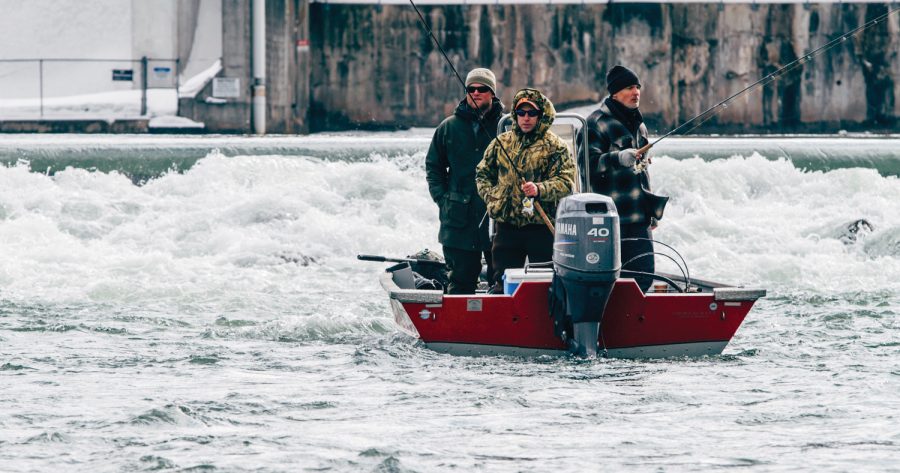 Few moments can jazz winter like seeing the chrome flash of a steelhead in a dark and frigid river. Fisherman and writer Bob Butz shares the how-to of steelhead fishing in Northern Michigan.

Before I tell you a little about the magic and mystery of winter steelhead fishing, I need to tell you the most important factor determining the likelihood of actually catching a fish. It should come before any discussion about what kind of rod and reel is best or whether float fishing, bottom-bouncing, swinging streamers or chucking plugs will put more fish into the bank or boat. The simple rule is this: You can’t catch fish that aren’t there. 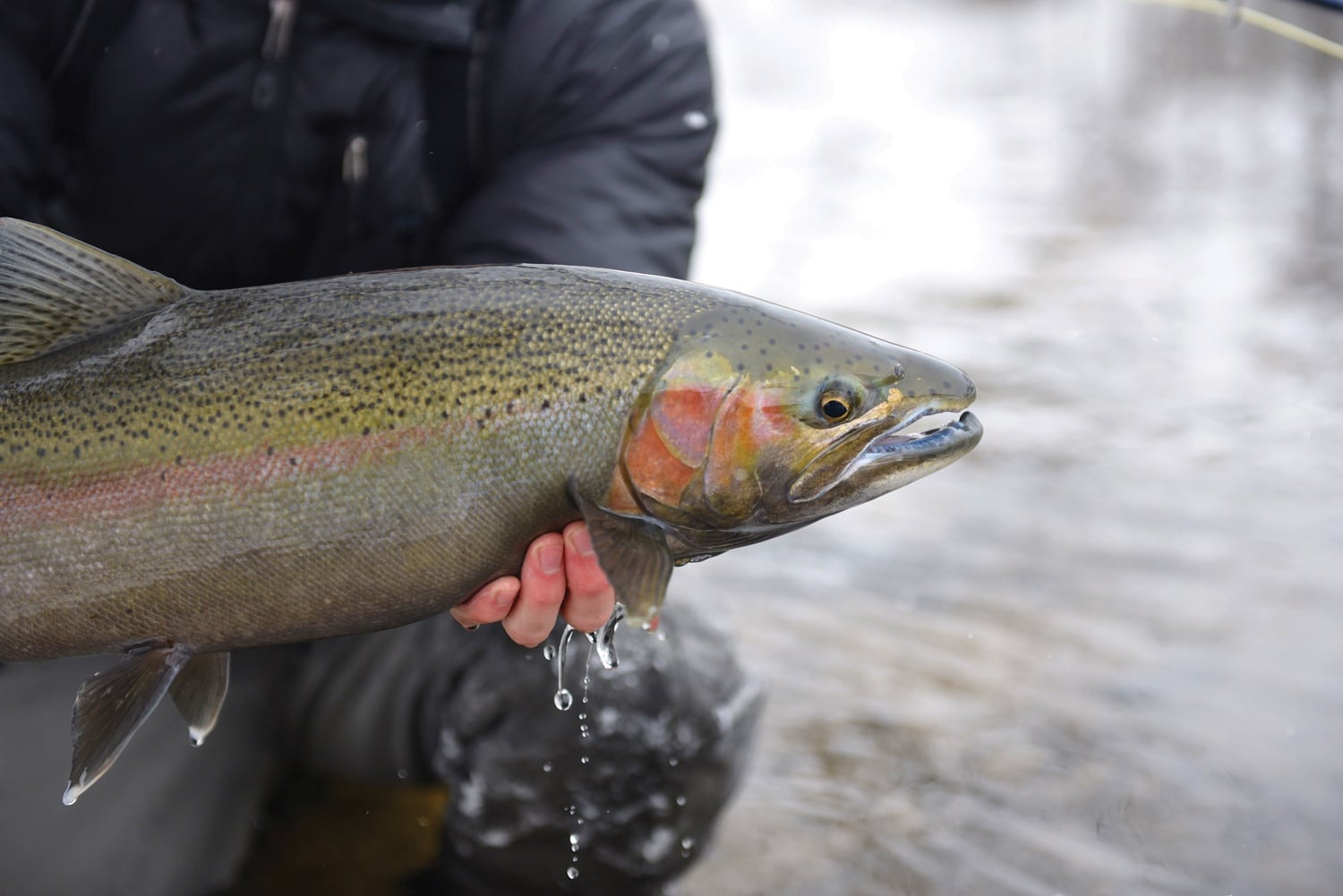 For as long as humankind has been fishing, people have been coming up with excuses for coming home from the water skunked. Lousy luck has been attributed to weather that’s too hot or too cold, water that’s too clear, too muddy, too low or too high. Fishermen blame the moon, the falling barometer and even the sun for being too … sunny. But here’s the deal with winter steelhead. The truly hardcore steelheaders I’ve met are a cultish and obsessive lot. And patient. They’re content to tie flies and spawn bags while watching the weather and waiting for word that the winter run has commenced. When it finally happens, generally on days when the weatherman advises to stay indoors, there are often fish in every seam and eddy to be had, it’s like no other fishing in the world.

Steelhead actually begin arriving in Michigan rivers during and shortly after the peak of the fall salmon run. These early fish stay put, gorging themselves on freshly laid salmon eggs while getting educated by anglers as they wait for the right conditions that encourage more of their kind to make a push upstream from Lake Michigan. This could happen anytime between January and March, the traditional peak of the season when the river temperature climbs to between 48 and 54 degrees. 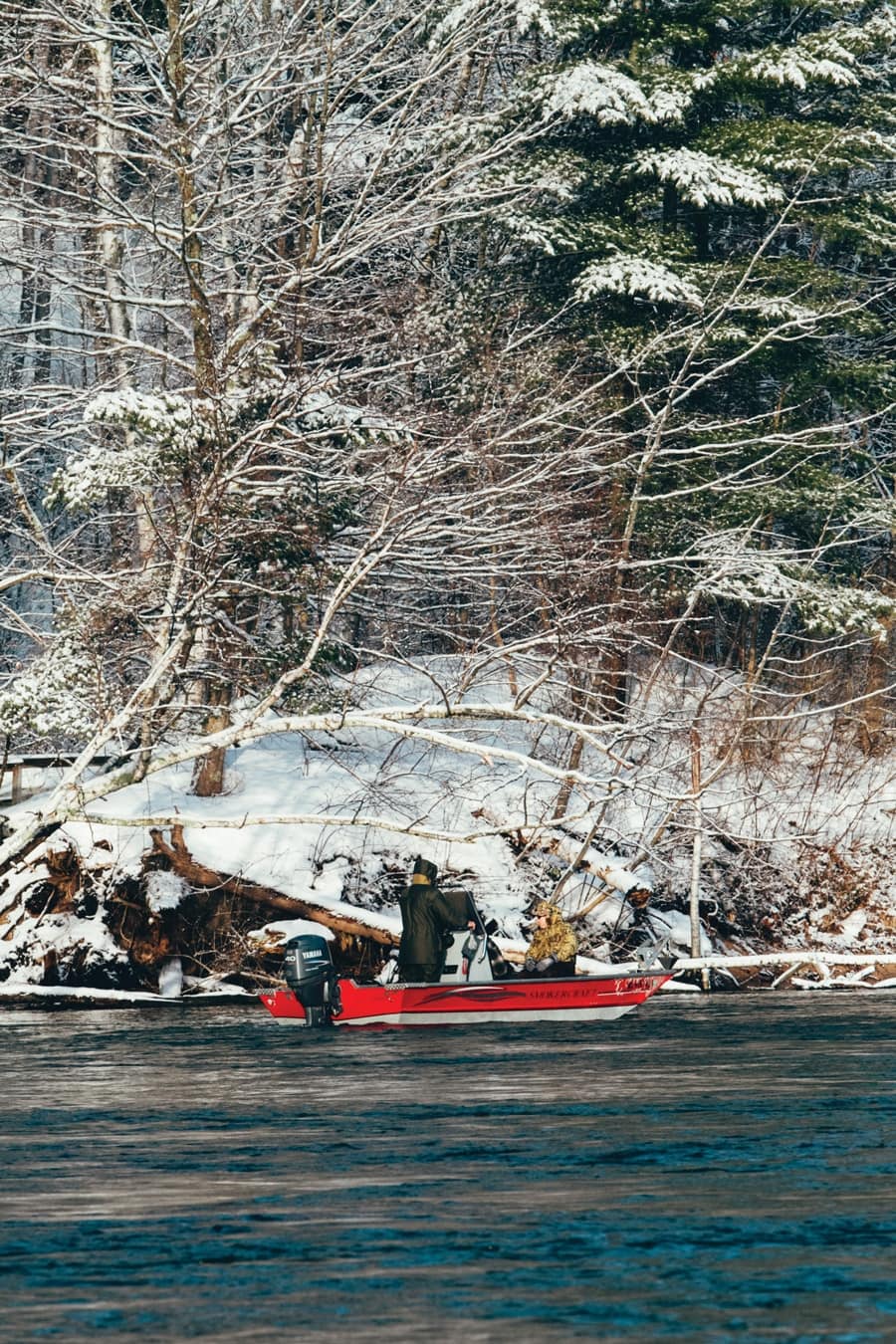 Regardless of whether or not the fish are hard-to-fool holdovers from the fall or newbies in the river prior to the spring spawn, steelhead are always on the move and never stay in one place for very long. In other words, a deep, dark waterhole that held fish one day might be devoid of life the next. So the smart angler with a shallow well of tolerance for enduring subzero temperatures is well advised to play the numbers and wait by a warm fire—reading fish reports and, my favorite, blogs from local guides—for word the run is on.

Steelhead are really just overgrown rainbow trout which, unlike salmon that fill the rivers in the fall, do not die after spawning. Young steelhead may stay in the river where they were born for up to three years before heading out into Lake Michigan where they can grow in five years to a weight of anywhere from eight to 20 pounds. The newest fish returning to their home waters to spawn are always easier to coax into biting than the fished-over ones that arrived in the fall, so the real magic of winter steelhead fishing happens when the number of newbies peaks. 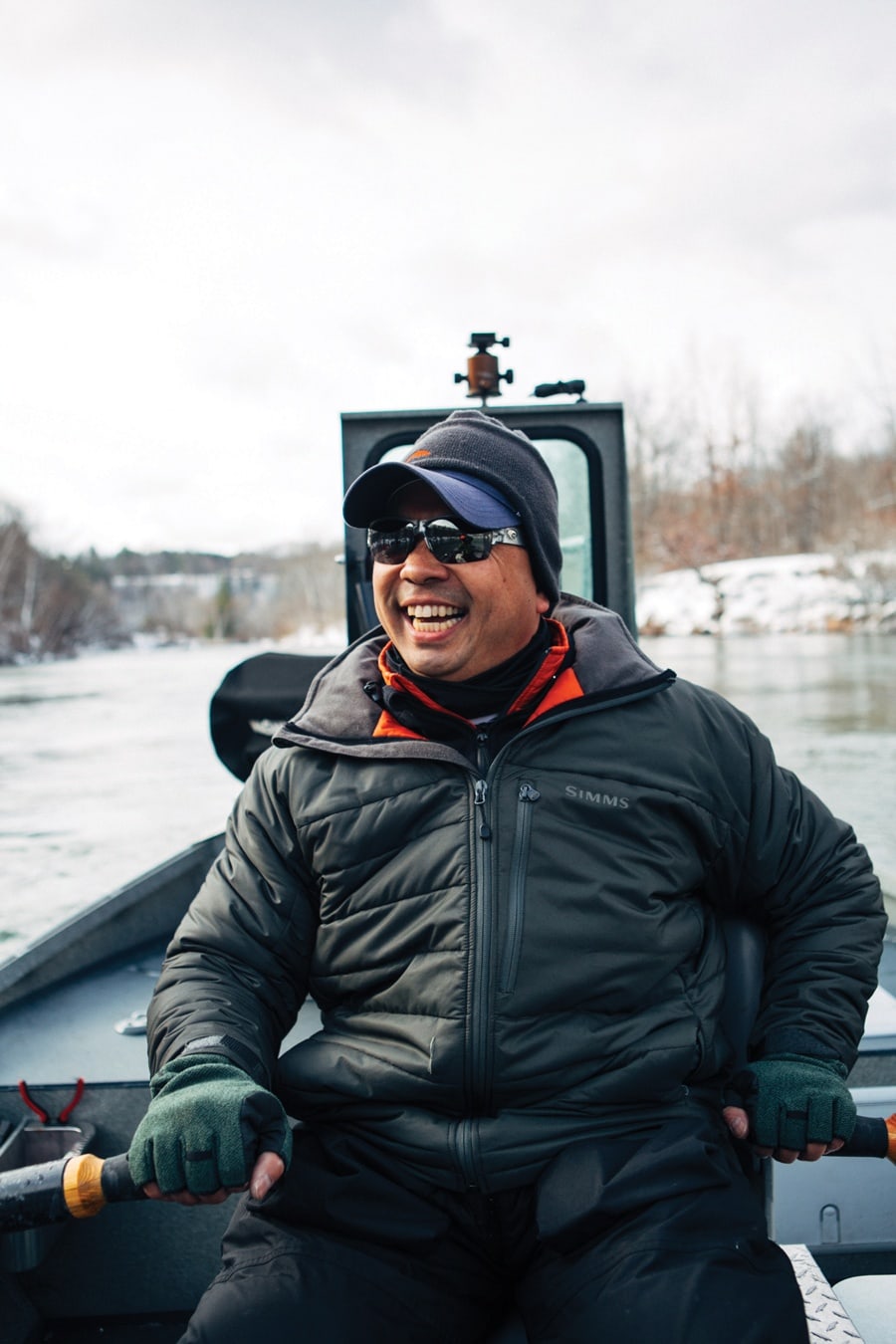 The lure of winter steelhead, for me anyway, has something to do with the liveliness of the river itself set against the backdrop of still, icy air and gray, leafless forests covered in a crisp blanket of snow. After months of winter numbness, the quiet landscape lies in contrast to the wholly electric sensation of feeling a fish on the end of the line, a fish so totally alive against the backdrop of a season so totally dead.

Steelhead fresh from Lake Michigan are leaping, surging, chrome-colored bullets that will aggressively take everything from Spin-Glo rigs, gold Wiggle Warts and chrome/blue Hot-N-Tots to pink colored spawn bags drifted under a bobber, hand-tied leach imitations and fuzzy, peach-colored eggs (both in size 8). I love to come upon a gravel bar, some boulder or submerged log and see the dark shadows of tailing fish. I love the anticipation of casting to something so big and alive and knowing that the strike, when it comes, will always cause me to gasp. Cold, numb hands suddenly begin to sweat. Muscles tense against a brilliant charge of electricity surging through every nerve ending. But I think what keeps me coming back year after year is the moment just before and after the strike. Sometimes at the take, there’s a flash of unseasonal silver, a flash of light in the cold winter murk. Instantly the line goes taut, slicing a small wake across the water as the fish blades into the current, often cleaving the surface with impossible somersaults and acrobatics. To go a winter without experiencing the spectacle … well, there’s really no excuse for that. 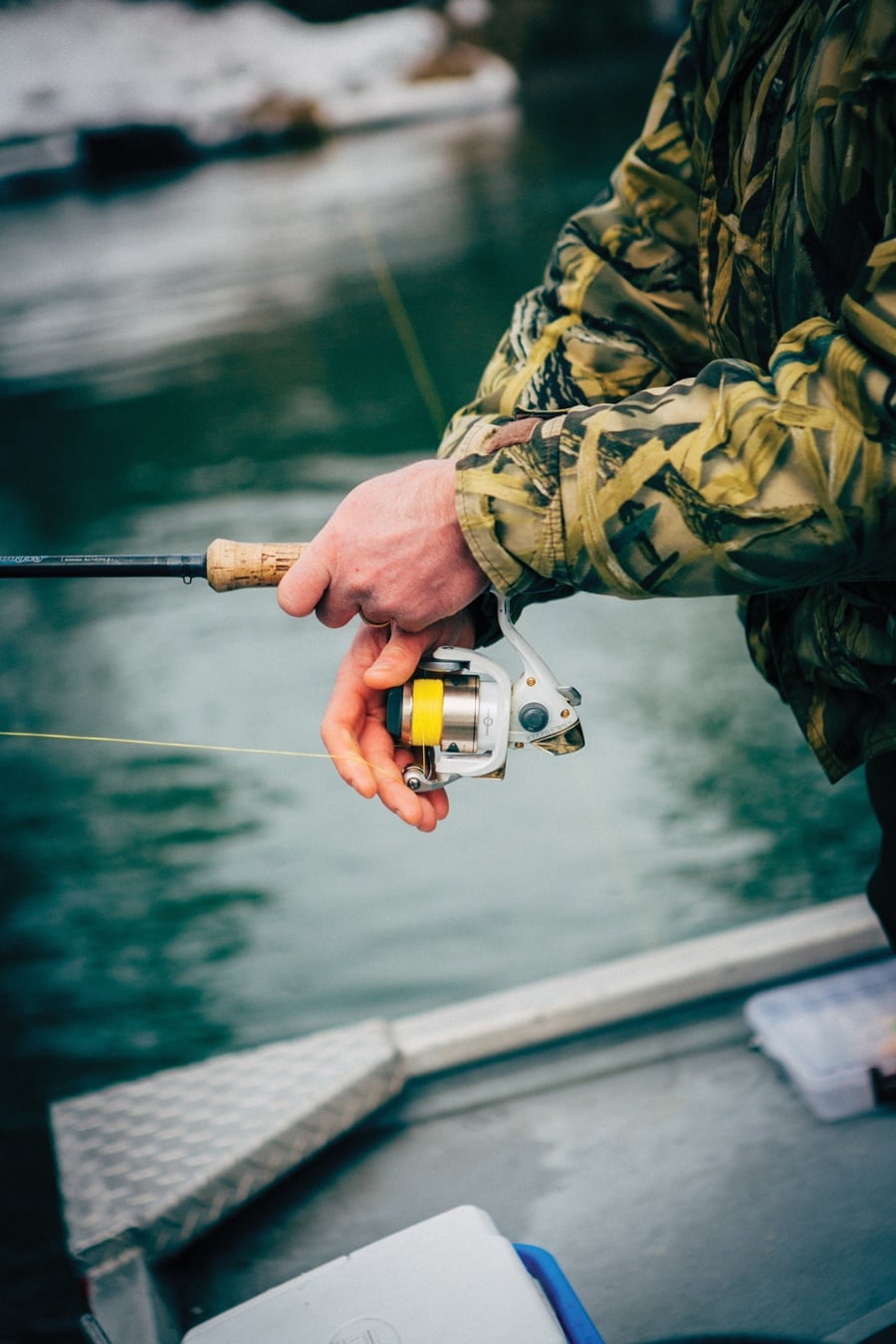 Where to go Fishing

So you’re not afraid of a little elbow-to-elbow competition on the riverbank? That’s what you’ll typically find in March when the steelhead run hits its frenzied peak. Steelhead can be found along the entire length of the Platte River in Benzie County during the river months, from the mouth at Lake Michigan all the way inland to the Platte River State Fish Hatchery, located four miles east of Honor. Anglers looking for less crowded banks will find good forestland access south of the hatchery (along with a campground located almost right across the street from the hatchery on US31).

The best chance to see winter steelhead on the Platte is in the stretch located below “the lower weir” located off Lake Michigan Road two miles northwest of M22. Trails to the water below the weir are numerous but largely unmarked. The other option is to head into the fray at places like Tippy Dam on the Manistee River and Homestead Dam on the Betsie River in Benzonia. Search Google for directions and camping options. What these places lack in seclusion, they more than make up for in the sheer number of fish. You won’t typically see the fish as you often can on the crystal-clear waters of the Platte. But if anglers are present, you can be sure the fish are there, too. Miles of riverbank trail on both the Manistee and the Betsie offer great access to downstream fishing opportunity. It only depends on how far you’re willing to walk. 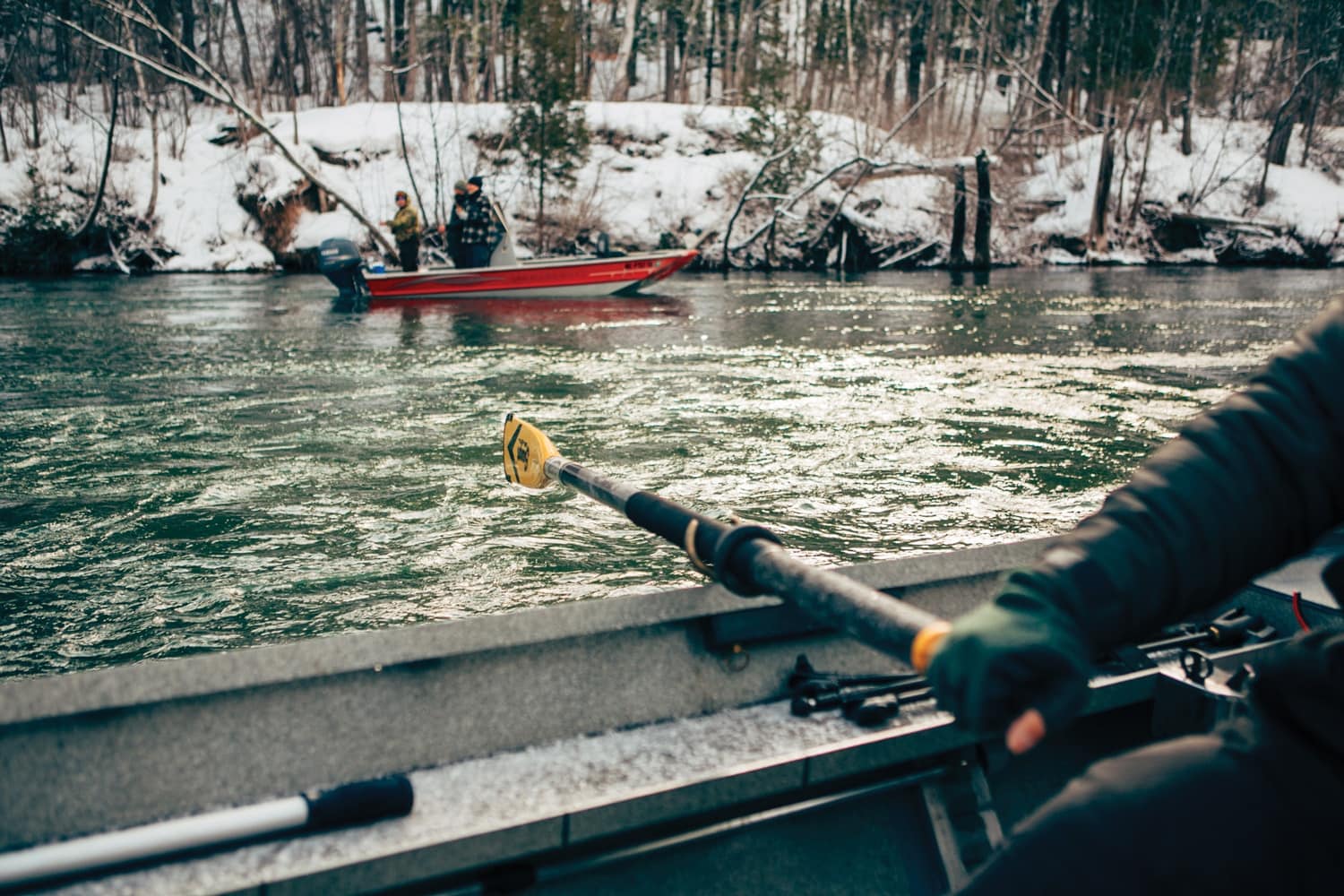 Going Fishing with a Guide

First-timers will do well to hire a guide. A good guide with a riverboat brings ready-rigged tackle, can show you how to use it and can even put you right on top of holes and into steelhead, even if you come to the launch in the morning having never cast a fishing rod in your life. Captain Ben Wolfe, Traverse Magazine’s “Best of 2014” winner in the Charter Captain category, is also a topnotch steelhead angler who offers fly fishing and light spin tackle trips on the Manistee, Betsie, Platte, Pere Marquette and Au Sable Rivers. He is also the only guide permitted to fish the tailwaters of the Platte inside the boundaries of the Sleeping Bear Dunes National Lakeshore. Ben Wolfe guided us on our day on the river (pictured above). Wolfe Outfitters can direct you to lodging opportunities at Crystal Mountain Resort or one of his other lodging partners. To check out his full-range of fishing services, go to wolfeoutfitters.com. There you’ll also find his regularly updated fishing blog/report that gives advice throughout the year on what rivers are producing and what lure/bait combos Wolfe and his team of guides are using to bring fish to the bank and boat. 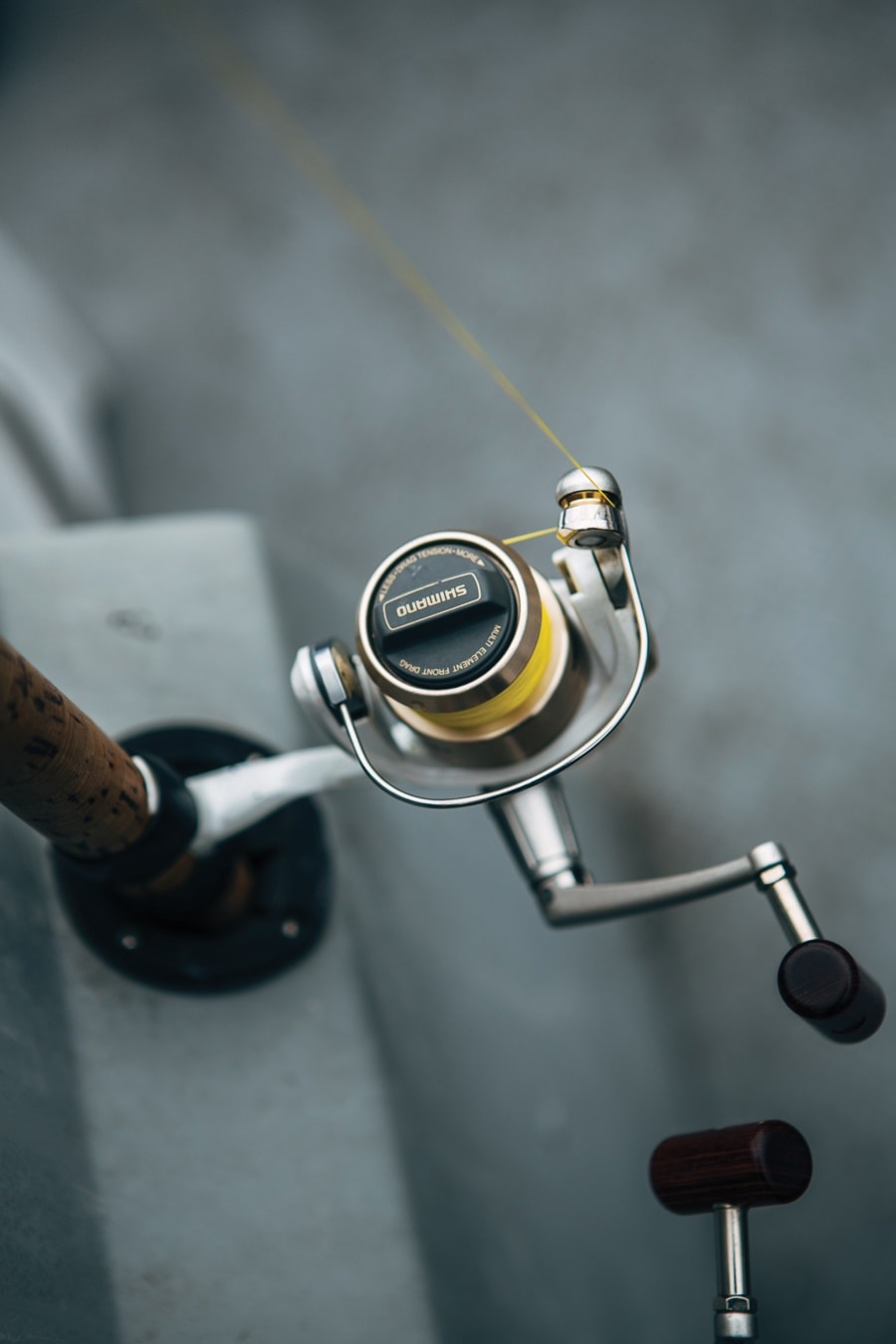 By far the easiest way to catch a winter steelhead is floating dime-sized spawn bags with a spinning or “noodle” rod with a length of eight to 10 feet. When fishing from the bank, the longer rod allows for longer casts and lighter presentation. The longer rod also gives you the option of using the lightest line possible (anywhere from six- to 10-pound)—important when fishing line-shy steelhead in shallow, gin-clear Michigan rivers in winter. The light-line-longer-rod approach may seem counterintuitive when faced with such a powerful fish, but the light line gives you greater reel capacity. With a good drag and ample room to play a fish, the longer rod gives you the necessary leverage to play the fish on ultra-thin line. For what it’s worth, the best steelheader I ever met favored a 12-foot rod with 4-pound monofilament when fishing the banks of the Platte and the Betsie. He could reach more fishy-looking water and always hooked more fish than others on the bank using shorter, more powerful rods and heavy line. And I can only think of a handful of times I ever saw him lose a fish.