Visiting a 1930s Christmas at Wellington Farm in Grayling

Howard Taylor’s historical Wellington Farm in Grayling becomes the stage for an annual  play about Christmas and community in the Great Depression. 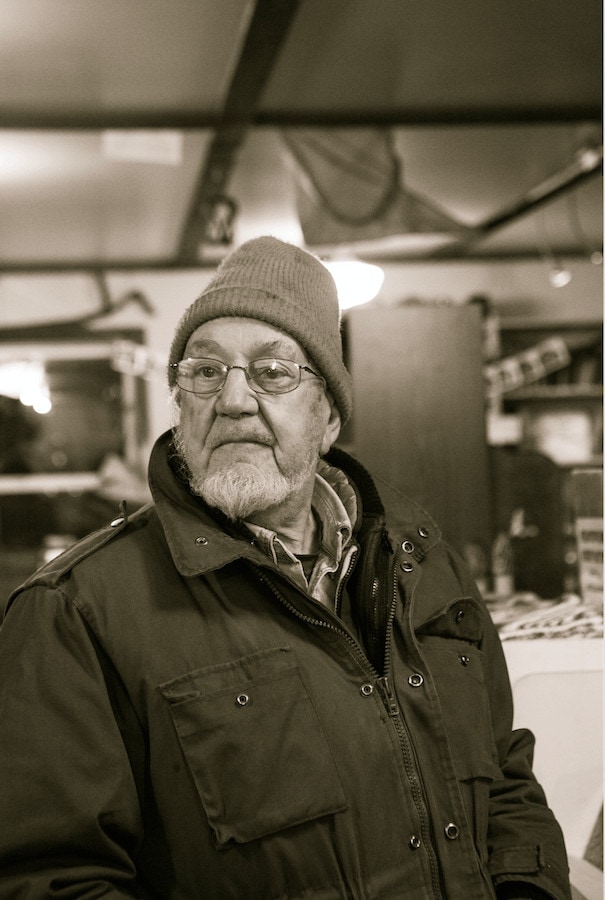 A simple Christmas, something people often long for in the 21st century, was a matter of necessity in rural Michigan in 1932. A bag of nuts and an orange for the children, and a handmade broom for the women was all many people could afford to make their seasons bright.

That’s the world Howard Taylor has re-assembled in Christmas by Lantern Light, a yearly walking tour and play set at his historical farm in the worst year of the Great Depression.

As the global economic calamity reached its nadir, settlements like Wellington stood all over Northern Michigan—tight-knit enclaves struggling to farm in the post-lumberjack era. Little is known about the real Wellington, though it was a community not far from its namesake in southern Crawford County.

We do know life was rough. For one thing, electricity was mostly an urban phenomenon before the New Deal and was still more than a decade away from lighting up isolated outposts like this, just outside Grayling. Beyond newspapers, if anyone wanted to follow the latest about newly elected President Franklin Roosevelt or the growing turmoil in Europe, they needed to connect a large, clunky radio to a car battery.

But in Taylor’s play, it isn’t world events or a desperate economy that threatens to darken this semi-factual yuletide of 82 years ago. It’s a rare act of vandalism. Somebody has smashed up the pump organ that local citizens had banded together to buy for the church a couple of years before. Without the organ, they’re not sure their Christmas program will go on.

And that’s the dramatic premise of Christmas by Lantern Light, a walking, building-by-building holiday play and historical period reenactment. A tour guide leads a group on a chill December night along a rough country lane lit by red kerosene lanterns hung on iron hooks. The flickering wicks barely make a mark on the gray-blue night sky looming above the veiny winter woods.

Taylor assembled this collection of country buildings on a 60-acre farm he bought in the early 1980s. He moved some of them, including a classic white-steepled country church, and built others. 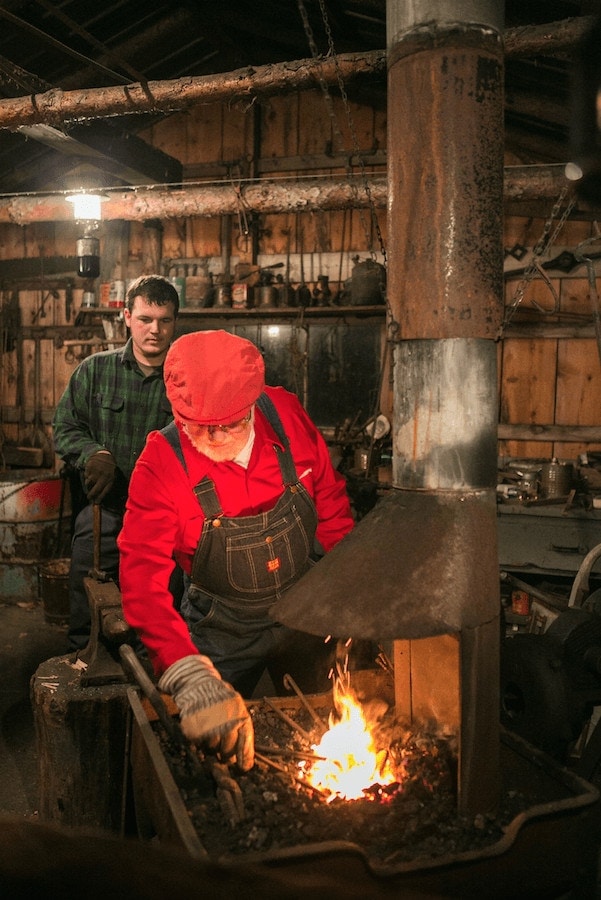 On a crisp, sunny morning a few weeks before the Christmas play, as gold leaves still kick up underfoot, Taylor gives a tour of the grounds. He conveys an intimacy of detail and sense of devotion earned by pouring his life into this historical farm. The retired theater and music teacher from nearby Grayling looks timeless himself, with his white chin-beard and wire-framed glasses under a work-worn engineer’s cap, though he doesn’t act in the play. He wrote the dialog and researched the local and national historic references sprinkled throughout. He also inserted explanations of the crafts being plied by the volunteer actors, from getting the seeds out of the broom corn to making the milled barley flour cookies they hand out with a cup of warm mulled cider in the rustic and homey kitchen.

Taylor knew he wanted to create a living history park and decided to set it during the worst year of the Depression because he did not know of any other reenactment parks taking on that era; Wayne P. and Carla Lee Anderson, history professors who wrote Travels into Our Past, confirm that assessment.

Just because Wellington Farm Park is set in the ’30s, though, doesn’t mean the hundreds of tools, tractors and artifacts were made in that decade. It does mean, however, there’s nothing made later than the ’30s, since ordinary country folk were still using tools and work ways from the previous century. (So leaving your mobile phone on just might destroy the mood.)

Taylor says people have donated countless items over the years. Many are common implements for earlier Michiganders. Others are one-of-a-kind, like what are said to be the first dowel lathe and belt sander. Those were donated by the family of Perry Lamkin, who invented and patented the devices in the early 1900s near Milan, a small town outside of Ann Arbor.

While the Christmas pageant is the farm’s most popular program of the year, Wellington has a full spring and summer too, including bluegrass concerts in the pavilion, events highlighting dairy farming and garden tractor pulls. In addition, the farm books weddings and other get-togethers. 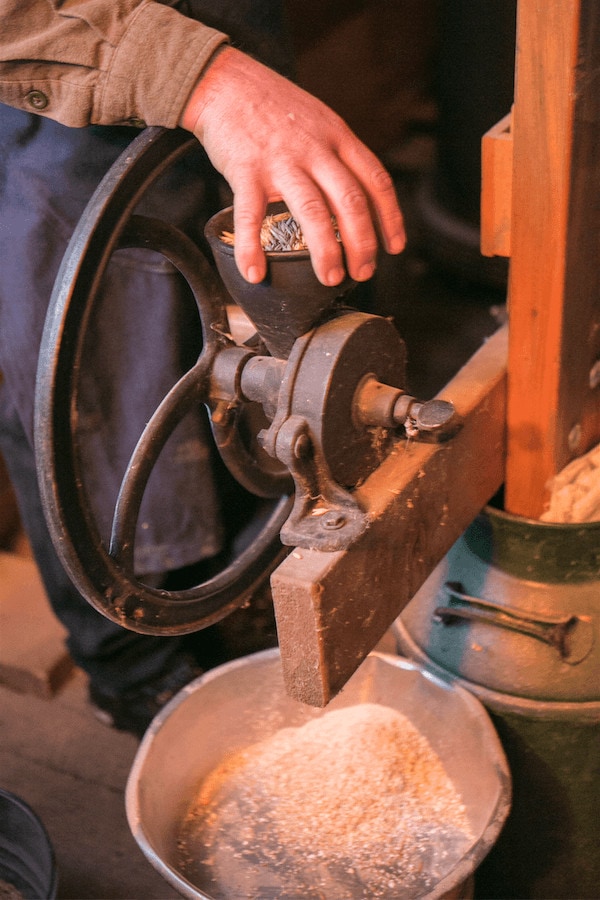 Taylor, who leads tours in the South during his off-season—at an historic plantation in Louisiana—is also looking for families interested in a summer historical reenactment of a Hooverville—the tent cities of destitute people named after the president who led during the beginning of the Depression.

Taylor plans to offer classes in old-fashioned canning, cooking and baking, too. “Nothing out of a box mix,” he says. Taylor also stays busy making the decorative—but also functional—brooms from the broom corn that plays into his Christmas script. He sells them in the store where the tours begin.

Lantern Light begins with a short bundle-up hay-wagon ride into the village, set in a wood at the edge of a small grain field. The play takes in the blacksmith shop, carpentry shop, grist mill and kitchen. At each one, visitors huddle around a wood stove, or near the forge at the blacksmith shop, and hear an act of the play. Ornery cusses and colorful characters in overalls, wool shirts and housedresses debate whether local novices can figure out how to fix the organ. They make an excuse here and there to take a sip of late-Prohibition moonshine out of a jar.

Taylor says the era the park represents hits home with people a little more these days in light of the recent Great Recession. And they can take comfort in the resilience of those times.

The story of Wellington Farm in Grayling was originally told in the December 2014 issue of Traverse, Northern Michigan’s Magazine. Get your copy here!