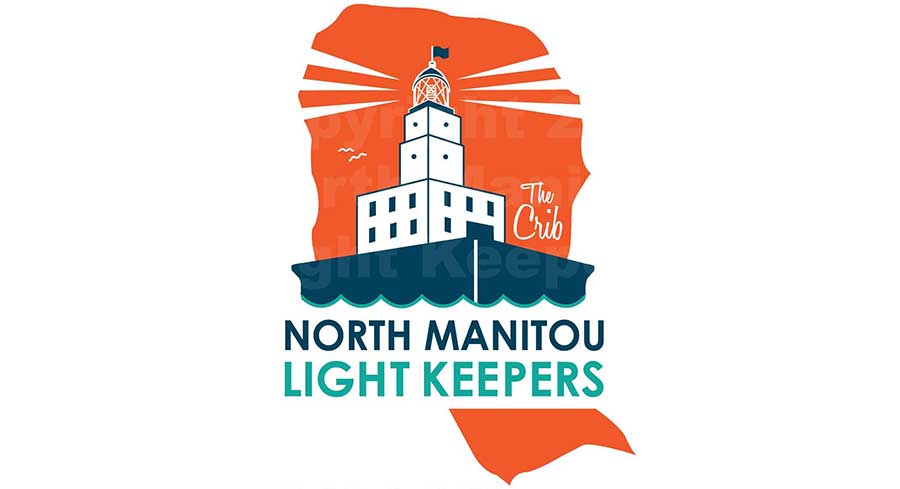 First, a bit of history:
The North Manitou Shoal Light (the Crib) was built in 1935 in the dangerously shallow waters along the Manitou Islands‘ passage between the Leelanau Peninsula and North Manitou Island. (Read here about the legendary treasure ship, the Westmoreland, that didn’t survive the notoriously treacherous waters). Sixty feet on a side, the Crib—as it was soon dubbed by the locals—was constructed as a 2–story white steel box on top of a concrete foundation with pilings driven 24 feet deep into the bottom of Lake Michigan. A unique 4–sided Fresnel lens sat 79 feet above the water at the very top of the pyramid shaped tower with an alternating red and white light and a foghorn. For over 40 years a rotation of three Coast Guardsmen lived on the lighthouse, alternating two weeks on duty followed by one week off. By the late 1970’s the Crib was the last manned offshore lighthouse in the Great Lakes. By 1980, however, modernization was inevitable, and the Coast Guard replaced the Fresnel lens with an automated beacon. A little piece of Lake Michigan maritime tradition was changed forever. 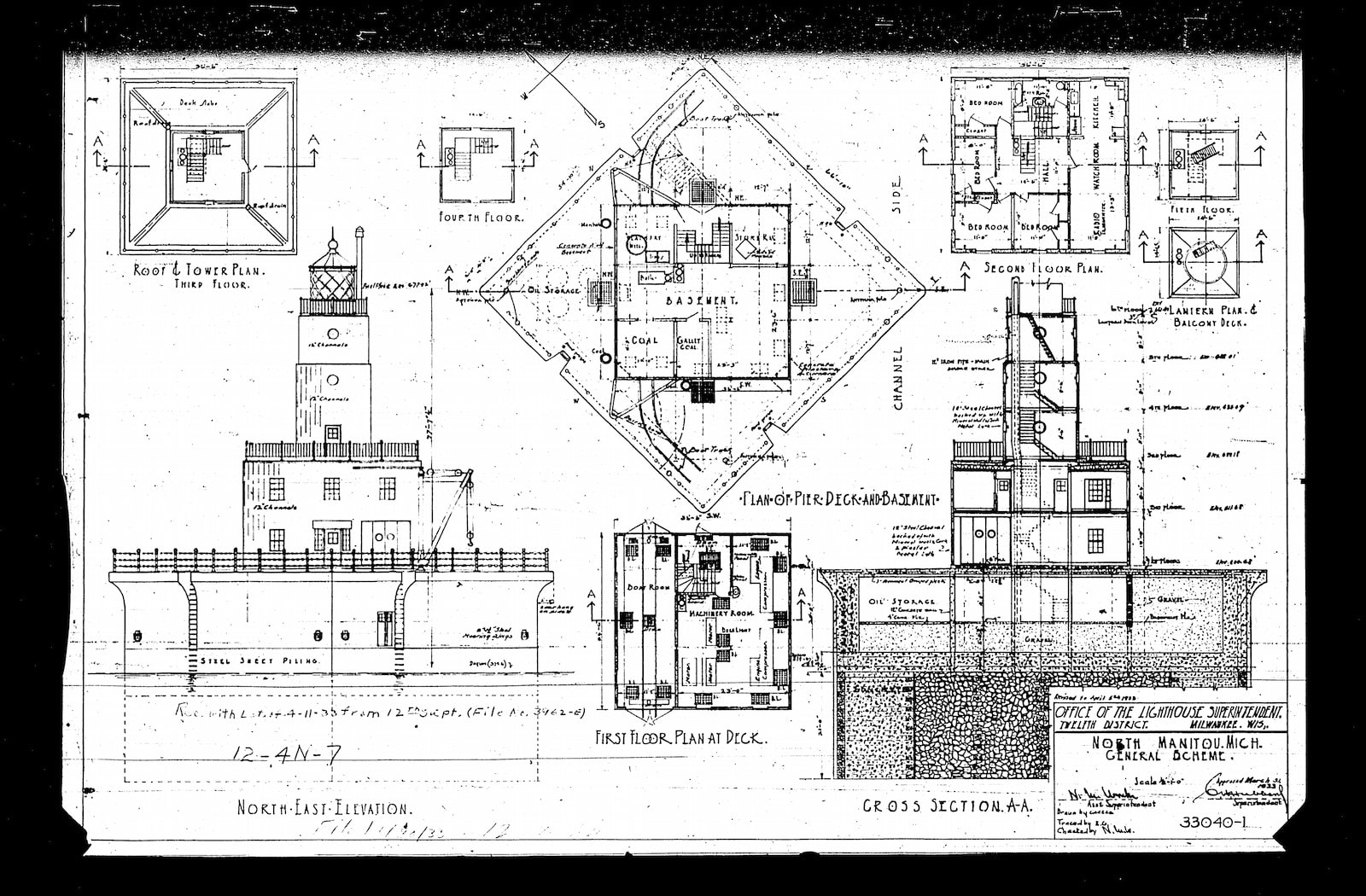 Fast-forward to fall of 2016. Jake and Susan Kaberle (Traverse City), Todd and Natalie Buckley, Dave and Sherry McWilliam, and Dan and Anna Oginsky (all from Brighton, MI) are an unlikely bunch driven by a common thread—the desire to leave a mark for the future and an interest in owning a lighthouse. They band together and purchase the Crib with a $73K winning bid at the U.S. General Services Administration’s September auction of three Great Lakes decommissioned lighthouses. The North Manitou Light Keepers are born.

MyNorth caught up with Jake Kaberle, managing partner of Burritt’s Fresh Market, at his downtown TC store, to chat about the vision for this new project:

You and Dan Oginsky go way back, but you didn’t know the other members of this group you’ve subsequently formed. So how did this adventure of owning one of the most iconic landmarks off the Sleeping Bear Dunes National Lakeshore begin?
I came across an article online late one night about the [U.S. General Services Administration] selling this list of lighthouses and sent it to Dan. I knew he had just taken a Boy Scout troop to North Manitou Island and further fell in love with the area. Within a few minutes, Todd [Buckley], who I didn’t know yet, had sent Dan the same article. We all got on the same wavelength and explored the idea. Dan and I were fraternity brothers at Michigan State; our wives were sorority sisters, and we have kids that are all the same age. We’re all in our early 40’s and like-minded, thinking about what we want to do for the future.

What was buying a lighthouse in an auction like?
There were four people bidding, but only one other real bidder that we were competing against. It added some real drama. Every time someone else bid that extended it [the auction] another 24 hours. At the ninth hour they kept putting in another bid. At one point we called it. It was a fun ride. There was a concession letter, and we all agreed this may not be for us. But Dan’s wife, Anna, made a plea the next day to the group that we do one more bid. So we did, and that was the winning bid.

What was surprising about the Crib when you actually got to go see it? 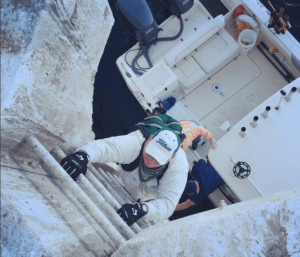 The layout…how big it actually is, when you are right there and start to look at it practically-speaking. Anything is possible. There have been two other groups that formed in the past that looked at buying it and deemed it too expensive. I think there was just a lack of creativity. We just have to think outside the box, and we will.

So what is your role?
There are four principals in our group that each have a different area of expertise from their professional career. We all have different focuses on the project. I am the local person on the ground and will be helping to coordinate volunteers. Several people have already come forward saying they would like to help in some respect: man hours, donations—both money and materials. I will be acting as the liaison to the National Park Service and to the Coast Guard.   [No matter what is done, the solar powered] light will maintain its function.

What has been the community response?
I have talked to at least 50 people since the news broke that have sought me out to share a story or a connection to the Crib. We’re cataloguing all these stories and we’re really hoping to reach people who served active duty on the Coast Guard rotation at the light. We have already started to get a response from them. The stories that have come out about the Crib have been the most fun.

Like what?
A “Coastie” took his motorcycle to the Crib and rode the outside perimeter during his rotation. And another one would always bring his dog out there. The dog would run the perimeter over and over and then back on shore would run a 60 foot square on land too and would not deviate from that pattern. I heard stories about the pool table that used to be out there and that is now in a gallery in Leland, and I have gotten to read some poetry written about the Crib by someone who was born and raised in Leland and wrote about what the light meant to her growing up.

What excites you most about being part owner? 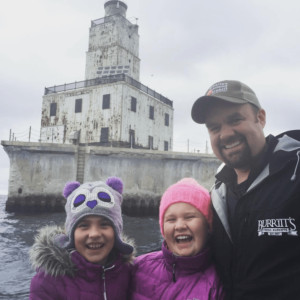 I’ve always seen the Crib as an icon that stands out in the Sleeping Bear Lakeshore Area. I grew up fishing out of Leland with Captain Jack Duffy on the White Cap. I would ask Capt. Jack where we were going to fish today, and it would usually always be in reference to the Crib. Since I can remember, that was the landmark. When you go to Pyramid Point and you climb to the top, you see the Islands, you can see Leland, and through so many different points along the lakeshore, when you scan the horizon, the lighthouse is visible. It’s what a lighthouse symbolizes: it’s a marker that provides security, it’s a symbol of strength, it stands up to the test of all the elements. And they are not making more of them. This one is pretty unique—it is surrounded by water.

I want to watch a sunset, and I want to see the Northern Lights from out there with my family.   I want to have the whole team out there and look back on the Sleeping Bear Lakeshore knowing we are preserving a part of maritime history for future generations. It’s about all of us coming together for a common cause and purpose. And we want to share it with as many people as possible. That’s the best part: sharing it with others.

You have two girls, Kendall (8) and Keagan (10) who are actually the only kids that have been out to the Crib yet. Tell me about the enthusiasm within your families—what do the kids think about this project? 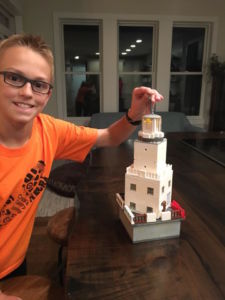 It is the true sense of child-like enthusiasm…from the fantastic lego project to Halloween pumpkins to sketches to selfies my little girls took out on the boat. My 10 yr. old is incorporating it into her weekly dialogue, and the screen savers on her computer and her phone are the Crib.

What kind of fun ideas are you guys throwing around at this point and have you decided on anything specific in terms of a vision or plan?
We are doing a lot of assessing in the next 6 months, laying out a plan, safe ingress and egress. Bird poop abatement—there is a lot of it! Cobwebs too. Making it safe for volunteers and contractors. The stars would have to align for events [Are we the only ones imagining dining, parties and receptions?] to take off there. [But] Manitou Island Transit will be an instrumental partner with us as they take an average of 100 people out each year just to see The Crib and the South Manitou Light.

You manage a very popular specialty food store, so I have to ask about the potential of a restaurant out there…
Nothing is off the table, but there aren’t any plans yet for food service. The world is full of possibilities. We want to take care of the structure first and make sure it is well preserved before we ask anything more of it. The big thing for us is stewardship.

You are hoping to raise money through grants and fundraisers with a tentative opening date to the public of July 4, 2021. In the meantime, what can the community participate in at this point?
We have a website with an active PayPal donation opportunity. We have a great logo and will be putting a few things up for sale (team gear) in the near future. We are also seeking an experienced grant writer right now and starting the fundraising process.

[The public can] look for updates on our website. Team bios will be put together shortly. The website has an email address, and people can follow us on Instagram and Facebook. We will start seeking out stories as well and putting together themed events for “Friends of the Crib.”

Check out this MyNorth video of a Manitou Transit boat ride through the Manitou Passage (with a view of the Crib) to South Manitou Island.