Maureen Abood Shares Her Favorite Lebanese Recipes for the Holidays 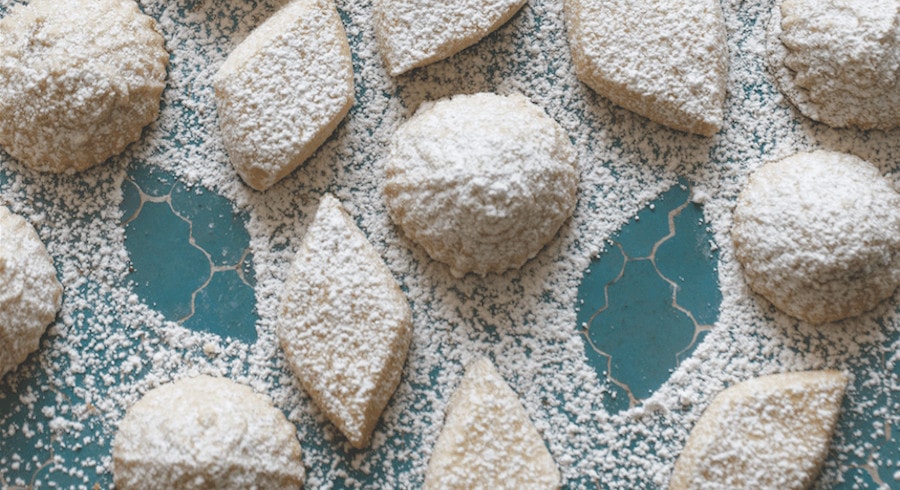 For Harbor Springs cookbook author Maureen Abood, family Christmases Up North were made unforgettable with her mom’s Lebanese family recipes. Maureen shares her memories (and recipes!) from her childhood holidays spent in Northern Michigan.

I remember distinctly the moment I sensed it. I was 9 years old, and it was Christmas morning. The massive tree lit up the living room, a pile of shiny presents underneath glowing in the pre-dawn excitement of five kids who’d been waiting for Santa. 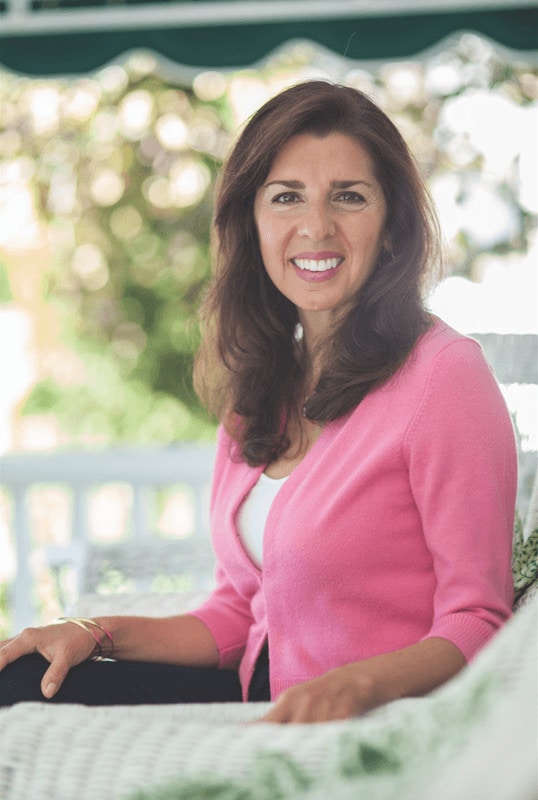 After I emptied my stocking of the top-of-the-morning treats, including chocolates Mom always dipped in the tradition of her own parents, I positioned myself squarely in front of the tree. I wondered if I had eaten too many sweets, or maybe my emotions had changed because I was a year older. I didn’t know what the issue was, but something here was noticeably different. What I felt was markedly diminished from the Christmas morning ecstasy that enraptured me in years past. But what I didn’t know is my dad had a plan that would put the elation back into Christmas day. After we’d torn through the gifts and I’d eaten my Sitto’s egg casserole and coffee cake, Dad lifted his voice throughout the house to anyone he could reach, and shouted, “Pack it up! We’re going Up North!”

A heady thrill descended. I threw whatever toys and candy and sweaters I could fit into my tiny suitcase, and took my spot in the way back end of the station wagon. I realized, as I sat there waiting for the car to fill up with siblings, that my kid-thrill of opening Christmas presents had been replaced with something much better: a trip to that happiest of happy family places, our house on Main Street in Harbor Springs.

Arriving on Christmas to a house that had been empty for a few months meant bringing provisions for what would be simple, eclectic, delicious meals. Bean with bacon soup unapologetically from the can, Lebanese fatayar (meat- or spinach-stuffed pies), and a continually replenished cookie platter stacked with frosted cut-outs along with melt-in-your-mouth graybeh (Lebanese butter cookies, recipe here), and my mother’s baklawa—the Lebanese version of Greek baklava—a crisp, nut-filled, syrup-laden phyllo pastry scented with orange blossom water. By midweek, we’d settle in after skiing all day to bowls of homemade Lebanese-style chicken soup fragrant with cinnamon, or a sahnieh (a pan) of kibbeh dotted with butter and baked to a dark golden brown, eaten with soft, chewy flatbread.

There was no Christmas tree to speak of in the Harbor Springs house, but we didn’t miss it. The huge, gorgeous, well-lit pine hovering over Main Street in front of Holy Childhood Church gave us all of the holiday twinkle we needed as we walked downtown to buy blue, red, and green old-fashioned lollipops from Howse’s Fudge Shop. If it sounds storybook, that’s good, because it sure seemed like a fairy tale to us. As if on cue, one evening my dad opened a huge book and asked us to turn off the television. We sat all around him—with me on his lap, I’m certain of this even if my siblings beg to differ—eating cookies as he read Hans Christian Andersen to us, gifting a memory he could not possibly have known would be so lasting. 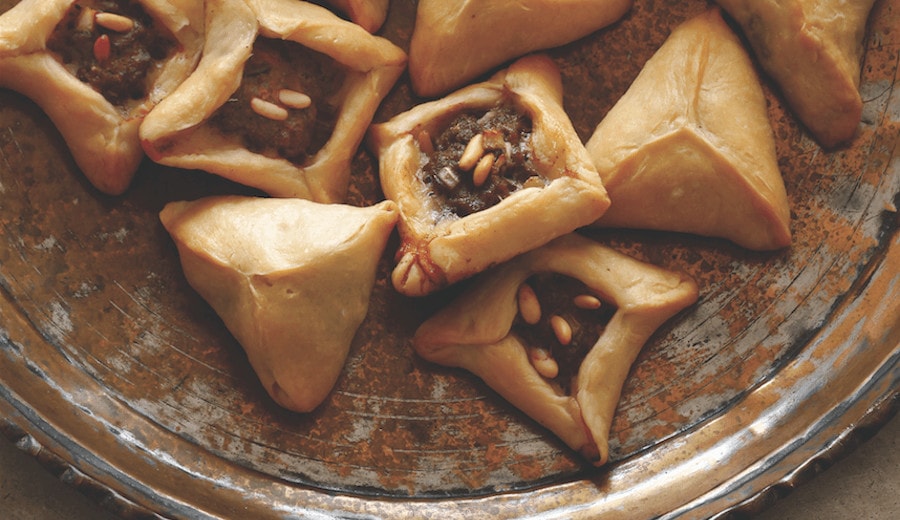 Remembrances of Christmases past, and the beauty of the long childhood summers I spent on Little Traverse Bay, stayed with me so well and so long that when life’s not-so-fairy tale twists and turns prompted me to consider making some big changes—of the sort that invoke the proverbial “carpe diem” to seize the day, and in this case feed my longstanding desire to write about family and food, Lebanese food in particular—a life Up North seemed to be calling me.

The first step in what I thought was going to be a complicated process was really very simple: I decided to leave my safe desk job in Chicago, where I’d lived for 15 years, and go to culinary school. I say it was simple because once I made the big-change decision, all other decisions fell swiftly and easily in line to support my goals, and it got so that I couldn’t imagine doing anything else.

I spent about a year in San Francisco studying French culinary technique, learning about wine and ingredients and soaking up every second with pure relish (well, almost every second: The burns to the skin and the ego that are an elemental part of culinary school weren’t quite so delightful). The people I met were as interesting and exciting as the work itself, with a West Coast flair that contrasted so nicely with my Midwestern roots.

Being completely on my own in that beautiful part of the world gave me time to do things like deliver a meal in the evenings after school to a good “friend of the house.” He was elderly, in his mid-90s, but always dressed snappy, and it was only after a couple of our visits that he waved me goodbye all the way down the hall of his apartment building, saying farewells until I got in the elevator and was gone. Those were special evenings, when Chuck would tell me the story of his life and career, which began with him picking dates on a farm in Palm Springs and led ultimately to his founding of a little hardware store in Sonoma County that he called Williams-Sonoma. I don’t eat a date, a favorite of the Lebanese, without thinking of him and the masterful, fascinating life he’d led.

If I could have just extended that dreamy California existence so that it would never end, I would have. But end it did (I couldn’t see living so far from my tight-knit Lebanese clan), and while I didn’t know precisely where I would land when it was done, I did know it would have to be a place where I could settle in, let my mind wander, and concentrate on the Lebanese food blog I was getting set to launch. 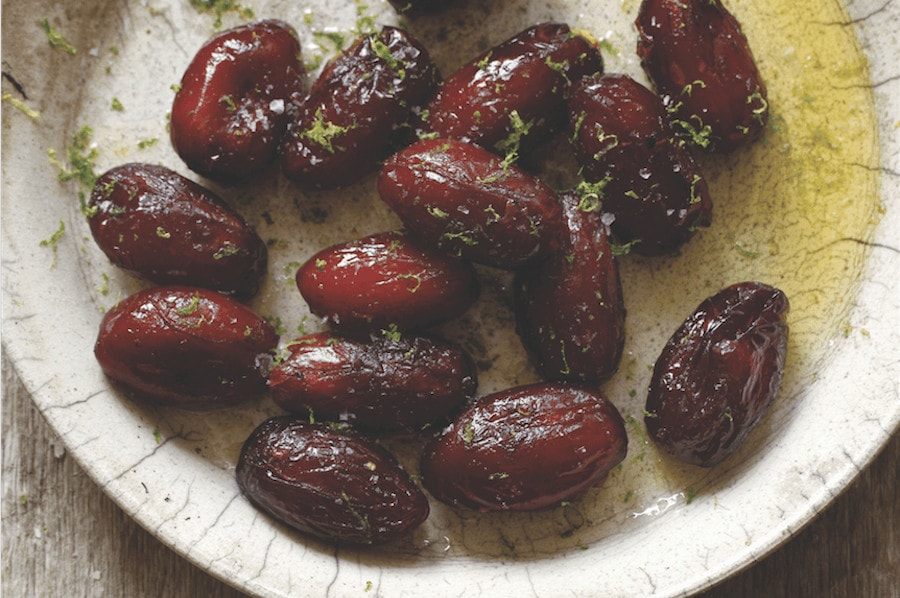 It didn’t take long for me to realize that Northern Michigan was my destiny, a place that had in its own way been preparing me to come back and bask in its glow from early on. When I arrived for this next chapter, it was summer, and I was reminded how our pure Michigan has its own glory not so unlike Northern California—and not so unlike Lebanon, as I’ve been told by my many immigrant relatives—but even better for being studded with my family, both current and in memory of years past. I found inspiration around every corner, and began putting the camera lens up to capture not just my food but also my remarkable surroundings for readers of my blog.

Happily, our family’s Main Street kitchen is white all over, with three big, old-fashioned paned windows above the sink. The windows are so dear to me that I put the same exact style above the sink in my own house now. I might actually even miss the leaky winter chill those old windows frosted my mom’s kitchen with, prompting me at times to turn on the oven and open its door to swirl the kitchen with a little warmth as I work.

Mom keeps a fuchsia geranium on the kitchen windowsill all year long. Miraculously, no matter how many months it has gone without water, it still bears pink petals and green leaves. That unsuspecting flower kept me company during the quiet months I’ve spent here, watching over me in my deep creative world (and yes, my blood, sweat, and tears) as I’ve worked at perfecting one traditional Lebanese dish after another and developing my fresh takes on those, using classic ingredients (like flower waters, bulgur, and our hallmark herb, mint) in new ways—and writing the stories that are what I consider the most important ingredient in what I do.

Years ago my brother Chris gave me a book called Writers’ Houses. It’s filled with the evocative homes and places where writers live and do their work. I’ve often thought of the house on Main Street as my own writerly house—and the kitchen as my own writer’s kitchen—even though I hardly put a word on paper there until the last few years. Dad is gone too long now, and there hasn’t been a full-on family Christmas Up North in ages, but my seat in the lap of this place keeps the stories coming like a platter of Mom’s Lebanese cookies, sweets so abundant it seems as though they’ll never be all gone.

Maureen Abood is the author of Rose Water & Orange Blossoms: Fresh and Classic Recipes from my Lebanese Kitchen (Running Press 2015), and her blog by the same name at maureenabood.com.

These recipes are featured in the December 2015 issue of Traverse, Northern Michigan’s Magazine.
Get your copy here!