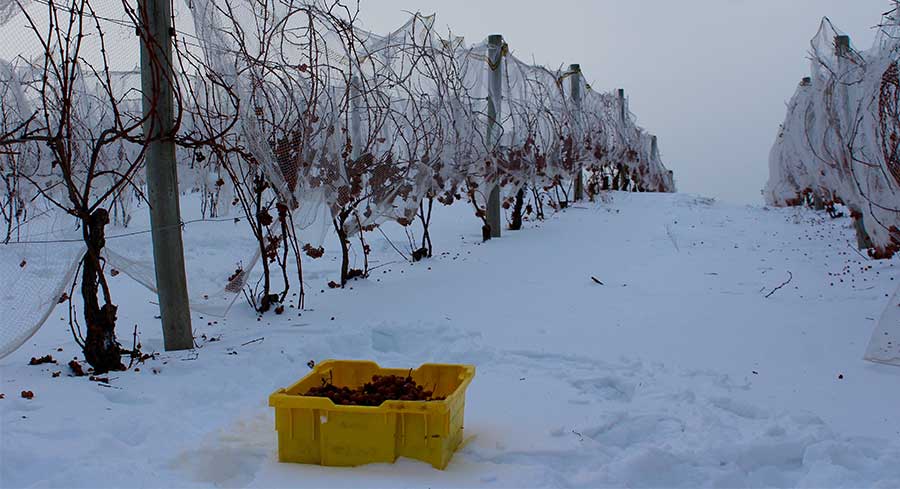 Dawn is just breaking as the temperature dips to a brisk 14 degrees, a cold so deep it hurts, yet the day rates perfect for hand-harvesting grapes from frozen vines. The third consecutive day with temperatures hovering around 17 degrees convinces passionate winemakers Alan Eaker and Shawn Walters to rally a handful of workers to Eaker’s Northern Michigan vineyard, 45 North, in the hills of Leelanau County.

This is the 2008 harvest of ice wine, a dessert wine that Eaker considers nectar of the gods. “There is no way to describe the beauty, elegance and special nature of ice wine,” Eaker says, insisting that appreciation can only be conveyed through taste.

Vintners make ice wine from healthy grapes left on vines to freeze. The grapes are pressed when still frozen, and the highly concentrated juice becomes a distinctive, aromatic dessert wine after a long fermentation. Walters emailed me several days before today’s brittle-cold harvest, predicting that today would be the day for the picking. If I wanted to experience the moment, I needed to quickly rearrange my schedule and drive four hours north to Leelanau Peninsula. 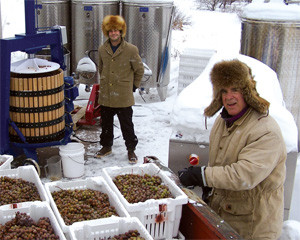 Full-time winemaker and part-time weather forecaster, Walters is one of Northern Michigan’s premier vintners. Walters was the winemaker at one of Michigan’s largest wineries, Leelanau Wine Cellars, for several years before taking the helm as winemaker at 45 North, in Lake Leelanau. He also owns One World Winery Consulting and makes wine for nearly a dozen wineries. As consulting winemaker for Longview Winery, Walters raked in 22 medals in Longview’s first year of operation alone. He boasts hundreds of medals for wines he has crafted, yet he’s still a few years shy of 40.

Grateful for the heads-up from Walters and for the obliging chill, I donned layers of Smartwool, fleece and other cold-proof gear before dawn on December 8. I hummed along to Christmas tunes on my drive up the peninsula from Traverse City, excited to be on the new adventure.

Pulling into Eaker’s farm, I am greeted by Walters and Australian Cattle-dog Arlo. The 1890 weatherworn, timber-framed barn with a simple Longview sign juts above two feet of snow, and the 1910 farmhouse blends into the wintry landscape. I hop out of my car, silently give thanks for my new tires’ traction on the twisty, snowy rural roads, and get to my first question: “Have you started to harvest?” Walters points to the vineyard, “They’re out there already.”

He seems surprised to learn I want to harvest some frozen grapes myself. “Take the two-track to the vines; we’ll be out in a bit to load up some grapes,” he says. Walters explains that a quarter-mile of vines bearing fruit hold this year’s harvest.Four workers, speaking in rapid Spanish and wearing dark layers and bright yellow gloves, quickly move down the vines, snapping and dropping the frozen grapes into crates. The workers’ ensembles contrast sharply against the snowy white backdrop and stark brown vines. There are no lush green grape leaves in sight.

I ask for a clipper, but the lead worker says, “Just snap the vine—it’s so cold, it snaps right off.” Easy enough. I take photographs of the crew before heading down to my own section of vines. Snap, drop. Oops. I dig in the snow for the fallen bunch of grapes. Snap, drop. Oh-oh, in the snow again.

There’s an art to this after all. I quickly learn to put the crate directly under the grapes. When the grapes fall into the crate, it sounds like stone-size hail hitting a rooftop. My thick gloves come in handy as I frequently dig in the soft snow for fallen fruit.

Averaging $60 to $80 for a slim 375 ml bottle (half the size of a standard wine bottle), ice wine is not cheap. In a good year, a ton of grapes yields 40 gallons of juice when pressed frozen; the same amount of fruit, harvested in the fall, produces 170 to 175 gallons. The price also reflects the fact that every ice wine harvest is a high-stakes gamble. There is
no way of knowing if any vines will still have fruit when the weather gets cold enough for the ice wine harvest. During
the long autumn wait, the grapes can be buried by snow, eaten by birds or raccoons, or battered by sleet until the skins break and the juice runs out.

There are many stories of ice wine origin. Germany is often noted for the discovery of ice wine in the late 18th century. It is likely, though, that ice wine dates back to Roman times. In North America, Ontario and New York are renowned for ice wine production. Michigan is becoming a top producer of ice wine, benefiting from the needed climate combination of warm summers, lingering autumns and cold winters with early frosts. Chateau Grand Traverse on Old Mission Peninsula crafted Northern Michigan’s first ice wine in 1980.

While most winemakers cover their vines in thin, white netting to fend off the birds, Eaker pursues a different strategy. He does not use the traditional Riesling and Vidal Blanc grapes favored by many Michigan winemakers for ice wine, and favored by wildlife as food. He prefers Cayuga, believing the heartier grape is less appealing to animals. Harvesting is made easier with no netting.

The sound of a motor signifies the arrival of Eaker and Walters driving a 1976 rusted, camouflage Ford pick-up. “I bought it for $200,” brags Eaker. They take a truckload of grapes back to the winery to begin the slow-moving process of pressing the grapes.

I eventually wrap up my section of vine, and while admiring my crate of grapes I realize that my effort is nothing compared to the four workers hired by Eaker for the morning. They have filled up crates and gleaned the iced vineyard in two hours, hastened perhaps by the cold.

Crates of frozen grapes stand in stacks waiting to be dumped into the iced wine presser, currently applying brute force to 900 pounds of frozen grapes. By comparison, during traditional harvests, grapes are gently pressed. Walters tells me I can’t leave until I see the frozen cake of grapes once the pressing is complete. The presser squeezes out the golden liquid, funnels it through a small opening and slowly pours it into a pitcher.

Once the container is filled, the juice is hand-poured into a 300-liter steel tank for fermenting. The winemakers are planning for 250 liters of juice by the end of the day, which would make 660 bottles of ice wine.

As we admire the slow-going process, lunchtime nears. Thinking nourishment, Walters asks, “Do you eat meat?” Out comes freshly-made venison stew, cooked with a bottle of the winery’s Cabernet Franc. He stewed the venison and tossed it with tomatoes and carrots harvested from the garden he grows with his artist wife, Cece. Paired with fresh, crumbly homemade bread and Longview Winery’s Cabernet Franc, the stew is a marvelous accompaniment to the harvest.

After a few hours of being in the freezing temperature and savoring two bowls full of tasty stew, we all agree it is time to warm up in the heated winery. We flip over five-gallon buckets to sit and thaw amid the barrels of Pinot Noir aging in the warmth of the pole barn. A few pours of Longview Winery’s 2005 Cabernet Franc Reserve and 2007 Cabernet Franc aid in the thawing and give me further reason to settle in. Arlo the dog knocks on the door and joins us in the toasty interior of the winery.

In my newfound comfort, I ask the winemaker why all Michigan wineries don’t harvest iced grapes if the rewards are so great. Eaker takes his time replying. “People are exhausted after fall harvest. There’s trepidation in regard to an ice harvest. When it’s time, we can’t hold back. We have to work. The cold is painful, and the days are hard and long.”

I ask Walters what makes for great winemaking and why he and Alan make such a good team. “From pruning to bottling, we’re growing our wine,” Walters says. “It’s about being selective at harvest. It’s about quality over quantity.”

During our chat fest, Walters tests the nectar’s Brix around noon, finding it at a rich 40 Brix. Brix expresses the sugar content in grapes, although it’s not a direct measurement of sugar. Rather, it is a measurement of density relative to water. Pure water is zero degrees Brix. In the winemaking process, as sugar is consumed by yeast, Brix goes down. As the yeast consumes sugar, it produces alcohol, and, when all the sugar is consumed, the wine is considered dry. On the other spectrum, ice wine tends to be very, very sweet, making it a luscious dessert wine.

The passion behind farming this 105-acre estate is evident in the way Eaker speaks of his land. “Living here is like being a country squire. You have to have your own garden,” Eaker grins waving out to the vineyard. “The truth is that this is a lifestyle. What’s really important is living the possibility.”

Eaker loves the possibility of being a winemaker. This is his third life or so, following years as an art professor at the University of South Florida. He grew up in Carmel, California, attended University of California, Berkeley, in the 60’s, and was a marine during Vietnam. Eaker and his wife, renowned bronze sculptor Linda Ackley-Eaker, found their way to this Northern Michigan farm after agreeing to take “the long view” in their relationship years earlier when they first met at an art conference.

It’s fitting that Eaker is now a winemaker: handcrafting wine requires artistry, an attention to detail, flair, creativity and patience. Younger winemaker Walters, as mentor, shares these traits. If he had any spare time, Walters would pursue his passion for pottery alongside his wife as she paints oils on canvas. The 30-year age difference between Eaker and Walters is not noticeable in the rapport between the winemakers, who met at a dinner and discovered their common interests. “We get along so well because we are artists—colorful, passionate,” Eaker says.

Over the course of the long morning and into early afternoon, we wait for the presser to complete its effort to squeeze a drop or two of juice from each frozen grape of the first batch. When the wooden cask is finally opened and separated from the grapes, I am amazed at the frozen cylinder. Innocently, I attempt to budge the block of ice, but it’s like hitting a brick wall. “It weighs 900 pounds,” Walters reminds me.

The winemakers try to chip away at it, but no luck. It takes a front loader to slice through the top third. The grapes are slid section by section into a wheelbarrow and then taken to a snowbank and unceremoniously dumped. “This would be great pig food,” Eaker says.

The work is far from done. A truckload of frozen grapes waits to be added to the presser. “Making ice wine is a double-edged sword. It’s incredibly labor intensive,” says Eaker. But at the end of the day, it produces a wine unlike any other. “Ice wine captures the essence of the grape in a refined, concentrated form,” Eaker says. “It’s refreshingly sweet with a high acidity.”

Longview’s 2008 ice wine was bottled and released as Sweet Winter Ice this spring. It tastes like honey with hints of cantaloupe, and earned a double gold medal at this year’s Michigan Wine and Spirits Competition. If Mother Nature cooperates again, the winemakers will bring in the 2009 harvest this month.

To me, ice wine seems a remedy for the soul. The palatable rich taste presents a perfect ending to any meal. “It’s sweet, yet full of finesse. A dessert wine refined,” concludes Eaker. “This ice wine, this farm, it’s a legacy for my grandchildren.”

This article is featured in December 2009 issue of Traverse, Northern Michigan’s Magazine. Sharon Kegerreis is a freelance writer and photographer. She is the co-author of From the Vine: Exploring Michigan Wineries, a 2008 Michigan Notable Book. You may reach Sharon at sharon@michiganvine.com.

Your Home for Northern Michigan Wine is Here!