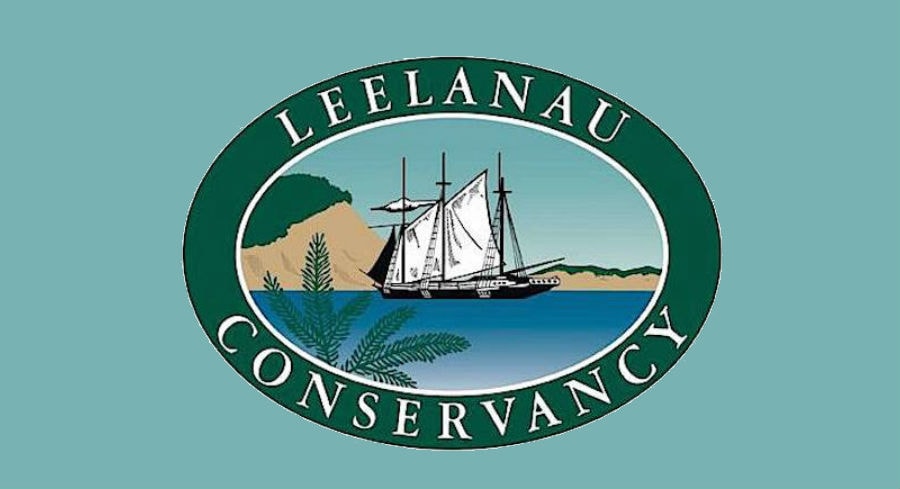 Thirty-six years ago, Mike and Janet McManus made a promise. They were about to purchase Karl Kiessel’s farm along Eagle Highway—an ideal fruit-growing site overlooking Lake Michigan. “Karl was a very nice man and he could have sold that 80 to anyone, but we had this verbal deal,” says Mike. “He disliked the idea of houses built on this land.” And, Mike and Janet were of the same mind. 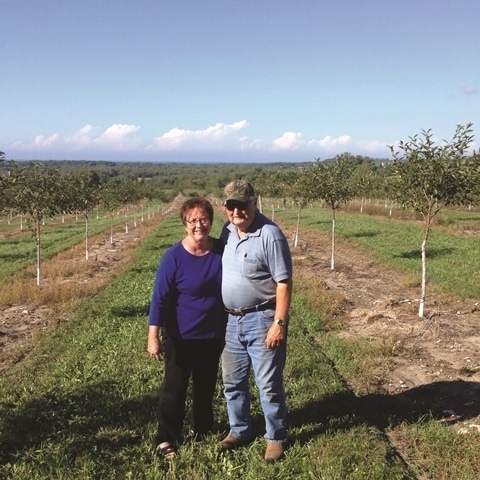 A handshake at Karl’s kitchen table sealed the agreement–as binding as any legal contract, says Mike. He and Janet kept the promise. But they worried about who would keep it after they were gone.

A few years ago, the McManus’ began talking to Tom Nelson [Executive Director of the Leelanau Conservancy] to learn about their options, including a purchase of development rights. In May, a total of 141 acres were forever preserved with a legal agreement called a conservation easement.  The agreement protects the Kiessel farm as well as 80 additional acres nearby that Mike and Janet purchased in 1983 from Harold and Lorraine Egeler. (Like Karl, Harold had one condition, but it was an easier promise to honor. He wanted to cut one cedar tree annually to make a post for his birdfeeder.)

In addition to preserving some of the best fruit growing land in the county, the McManus conservation easement also protects wetlands in the Lake Leelanau Watershed and takes in frontage along Houdek Creek. More good news: the land links up other preserved lands, including the Bardenhagen and Korson family farms, creating a working agricultural corridor.

With its stunning views, Mike says developers have come calling over the last 20 years. The development potential, the connectivity to other farms, the wetlands, the superb soils and sloping site are all reasons to ensure its protection. “It has what makes stone fruit farming possible—and so much more,” says Sam Plotkin, Farm Programs Manager.

All in the Family.

On a stunningly beautiful late September day, Mike and Janet talk about their 52-year marriage and how they got their start. A panoramic view from their home off Alpers Road takes in part of their farm and Lake Michigan beyond. When they bought the land, they had no idea that the view existed. 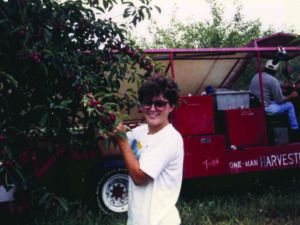 Michelle McManus, and her brother, Jim, spent summers and weekends helping their parents at the farm.

Mike had grown up in a big family on a cherry farm on the Old Mission Peninsula; his four brothers are fruit farmers in the Grand Traverse area, including the longtime Michigan senator, George McManus. Janet’s father owned a clothing store in Traverse City. Both sets of parents were “products of the Depression and carried that ghost on their shoulder,” says Mike.

Mike and Janet married young. “She put me through college,” he says. After a year in Flint, he landed a job at Traverse City Central teaching history. Janet worked full time for the company known as Greenstone today that serves the farming community. They lived in Garfield Township and raised two children there, Michelle and Jim. Farm chores ate up evenings and weekends. They burned up the miles commuting; bef

ore long they converted old migrant quarters into to a makeshift campsite. While Mike tended trees and managed crews, Janet kept the books. It wasn’t until 2004 that the couple actually built their home and moved to Leelanau. But for 22 years Mike served on the board of the Northwest Michigan Horticultural Research Station Foundation, the group that built the station and brought agricultural researchers to Leelanau.

A Love for the Land and Farming

Mike talks about his love for farming. “It gets into your blood,” he says. “I enjoy all the seasons: the optimism that comes with spring and the satisfaction of the summer harvest. Fall is a time to reflect and to plan for next year.” 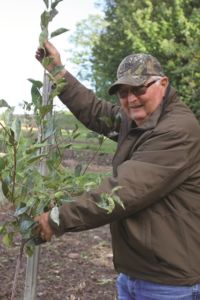 One year of growth on a young cherry tree.

Both he and Janet agree that optimism and commitment are essential to being a cherry grower, given all the challenges and disappointments.  He believes that agriculture provides stability to Leelanau County. “When a cherry farmer plants a tree, he’s making a 35-40 year commitment,” he says. “It’s six or seven years before any sort of pay back. How many people will do that today?”

Part of their plan is ensuring that their land will always be available to farm, whether it’s a member of their family or another young farmer, who, like them, dreams of being a cherry grower.

“We are not alone when it comes to valuing the land,” says Mike. “Most growers I know do. In fact I think that’s what Leelanau Conservancy’s supporters and growers have in common—a love for the openness and the beauty of the land and how unique it is.”