Northern Michigan architect Glenn Arai is being recognized as an unsung modernist master, more than a decade after his death. Fortunately, a quietly perfect home he designed on Old Mission Peninsula has fallen into caring hands.

The unassuming home sits on the sunrise side of Old Mission Peninsula, just at the edge of the blue. Tourists driving down East Shore Road don’t slow to look or snap pictures as they do farther up the beach. Look closer though, and the details compel: studied, perfect proportions; two slim windows that reflect enticing slices of the bay; discreetly positioned front door. All in all, a structure in harmony with its site.

Such exquisite scale and positioning came from the mind of a talented but relatively obscure architect, Glenn Arai (1925–1998). Chris and Donna VanSteenhouse hadn’t heard of Arai before their real estate agent led them through the door of the Old Mission home in 2009. But having lived in and carefully renovated a succession of five Alden Dow–designed houses in Midland, the VanSteenhouses recognized good modern architecture and purchased the home. Since then, the couple has learned enough about the late Glenn Tsutomu Arai to decide that his work deserves more exposure.

Throughout the 1960’s and 70’s, Arai quietly designed modernist dwellings and commercial buildings from his studio in Suttons Bay. The VanSteenhouses’ home on East Grand Traverse Bay was a commission for Dr. and Mrs. Douglas Frantz around 1970 and stands as one of the smallest structures Arai designed, around 2,500 square feet. Other Arai-designed structures are scattered throughout Traverse City and the Leelanau Peninsula. The Frantz house is a succinct visual summary of Arai’s style and philosophy—perhaps even a reflection of his personality. The unpretentious street-side facade and human-scaled, outward-looking interior convey simplicity, humility and a love of natural beauty.

From the central foyer, Arai’s complex spatial arrangement presents a teasing view of several rooms. The east side, almost all glass, displays the shifting colors and light on the bay—a dynamic picture that Donna calls “kinetic art.”

Natural-finished wood and stone (some collected from the building site and a crumbling barn that once stood nearby) are the primary interior materials. The VanSteenhouses replaced original blue shag carpeting with slate tile, an update that enhances Arai’s original vision and fits the earthy palette. Donna gave equal consideration to furniture selection for the living room, choosing pebbled chocolate leather seating and a coffee table with exposed joinery, reflecting a similar technique visible on support beams throughout the house. “I’m a restorer,” Donna says. “I try to give a house a second life.”

Though the couple was tempted to open and expand the kitchen they opted to stay true to Arai’s efficient L-shaped layout, hiring Kitchen Choreography of Traverse City to replace cabinetry, counters and appliances. Modernizing the space with its existing layout was a challenge, says project manager Rick Robinson, and required custom solutions, including cabinetry specifications to within 1/16 of an inch.

That attention to detail played out in new cabinets constructed of book-matched Douglas fir with horizontal grain to mimic the lines of the house. (The original kitchen cabinets now provide storage in Donna’s art studio in the garden-level basement.) The original Arai-designed exhaust hood casing remains at the kitchen’s center, updated with custom hardware.

Beyond adding a second entrance to a loft formerly accessible only by ladder, the VanSteenhouses preserved the layout of the entire house as carefully as they did the kitchen. It’s as if the blueprint is still on Glenn Arai’s drafting table, executed with his artful hand and a perfectly sharpened pencil.

This article is featured in the August 2011 issue of Northern Home & Cottage. 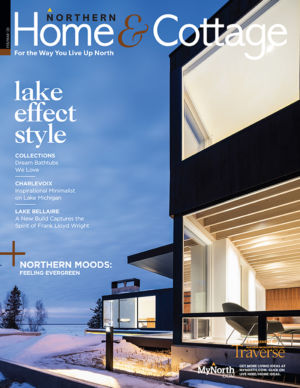