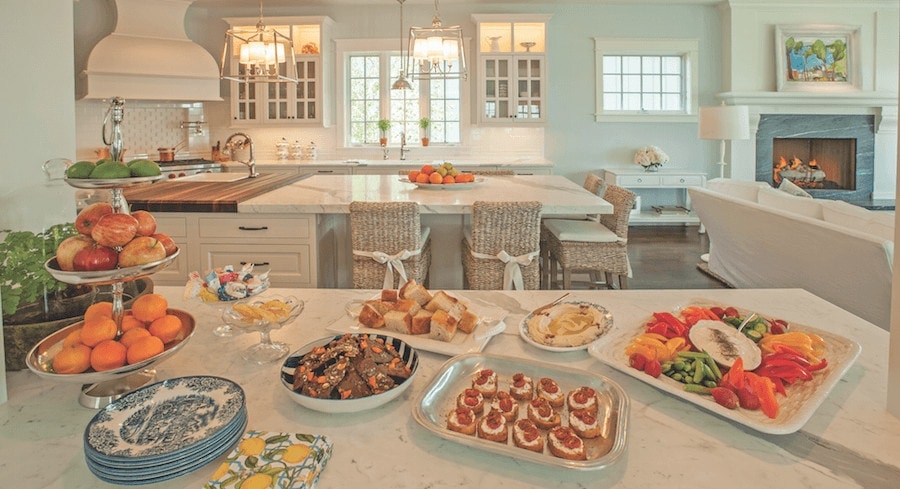 Food writer Maureen Abood welcomes us into her Harbor Springs cottage and shares some of her favorite Lebanese-style appetizer recipes for the holidays.

At the holidays Maureen Abood’s kitchen is filled with the scent of wild thyme, sumac, sesame, honey, flower waters and nuts—the sensual aromas of Lebanese cuisine, the food of her heritage. The difference this holiday season for Maureen, author of the recently released cookbook, Rose Water and Orange Blossoms, is that she will be making the dishes in the kitchen of the new cottage in Harbor Springs that she shares with her husband, Dan Shaheen.

Both Maureen and Dan have deep roots in Northern Michigan—Maureen’s family summered in Harbor Springs while she was growing up, and Dan’s family enjoyed nearby Walloon Lake. Their families, neighbors in Lansing, visited each other on Up North vacations, enjoying fresh Lebanese dishes like hummus, tabbouleh salad and grilled lamb and vegetables—all fond memories for the couple. 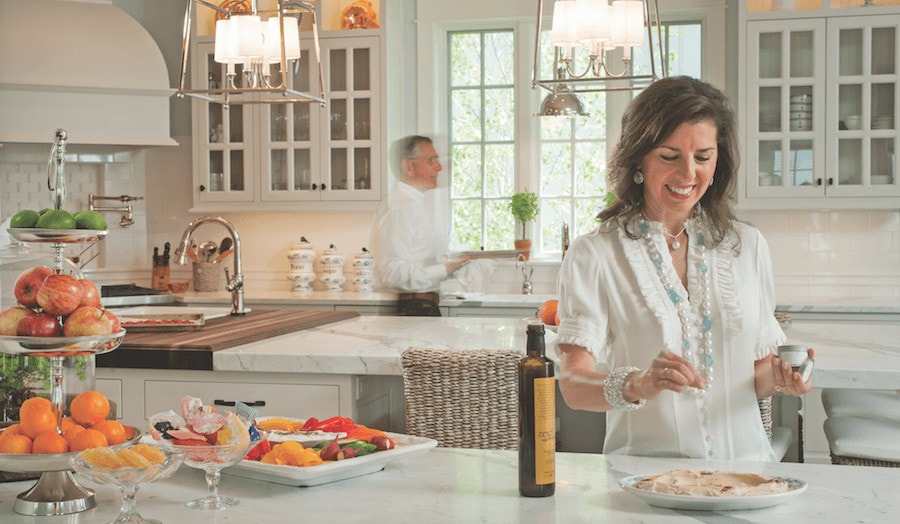 From the beginning, Maureen wanted their new home to evoke memories of her family’s home on Main Street in Harbor Springs. “I grew up learning and loving Lebanese cuisine and family gatherings in that kitchen,” she says. “And it was also there that I launched my career as a food blogger and cookbook author.” (Read that story and get more of Maureen’s recipes here!)

From its rooftop deck (outfitted with a complete outdoor kitchen), right down to the great room, Maureen and Dan’s new home is, indeed, as light and airy as the breeze off Little Traverse Bay across the street. Designed by Petoskey-based architect Nicholas White, the home’s exterior combines elements that evoke grand Eastern seaboard homes, including stacked, covered terraces and a hipped roof that culminates in that rooftop deck’s white railing—a touch that is reminiscent of a schooner-era widow’s walk. 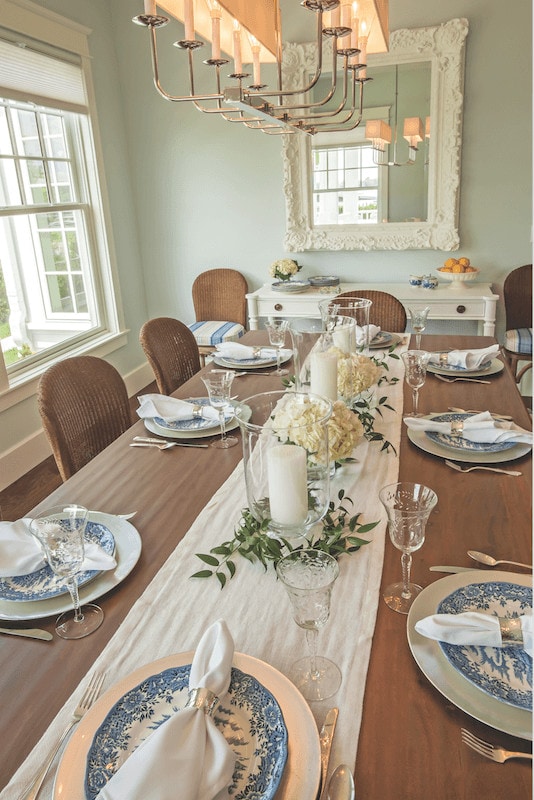 While Dan and Maureen were fully invested in the interior design choices for their home, they turned to Vee Mossburg, founder and principal designer of the Harbor Springs-based Cottage Company Interiors, to refine their ideas into a style that Vee calls edgy, relaxed traditional. 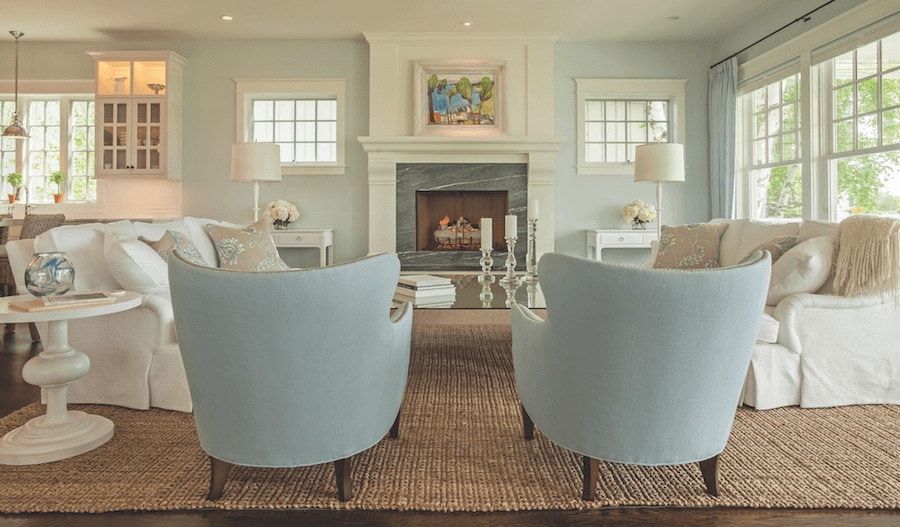 Given Maureen’s career, as well as the couple’s shared love of cooking (Dan can whip up a mean chicken hushwe, a Lebanese cinnamon and rice pilaf) and large family gatherings, the kitchen was particularly important. “Our space was designed to continue the tradition of bringing family together around the table,” Maureen says.

To that end, the kitchen opens to the living area and a pass-through buffet connects it with the dining area. The focal point is an 11-foot long, 2-inch thick slab of marble with seating around one end and a black walnut counter top that in turn holds the vegetable sink at the other. Beautiful as they are, Maureen also chose the surfaces for their practicality. She rolls pastry dough directly out on the marble and chops directly on the walnut. “Usability is important to me,” Maureen says. “I like the ease of having the surface right there instead of getting out another board and then having to wash it.” 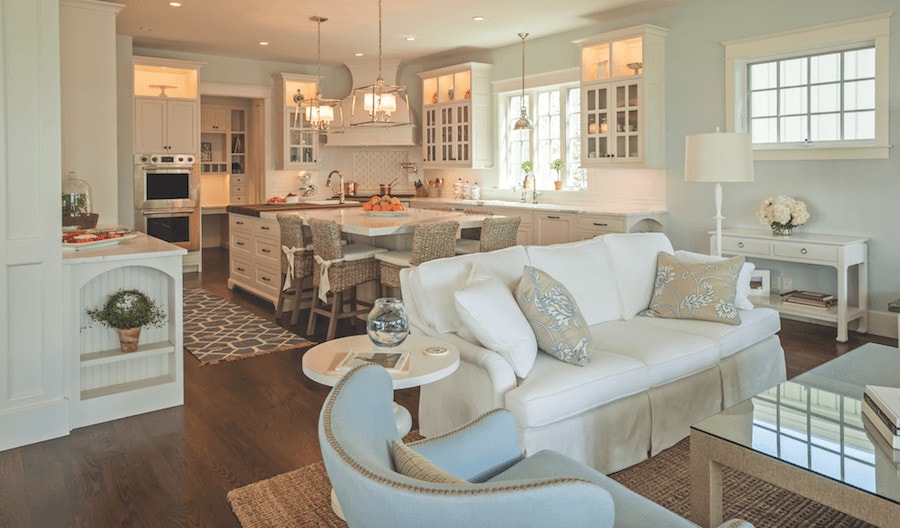 Maureen is quick to point out that while she delights in having the best tools for her career as a food writer, she and Dan never forget that the heart of a home kitchen is much more than the fixtures. “My grandparents had such humble beginnings and they really did well with what they had,” she says. “Dan and I both know that while these things are really nice, you don’t have to have them for a wonderful home, a wonderful kitchen, or to make wonderful meals.”

This article is featured in the December 2016 issue of Northern Home and Cottage.
Get your copy here! 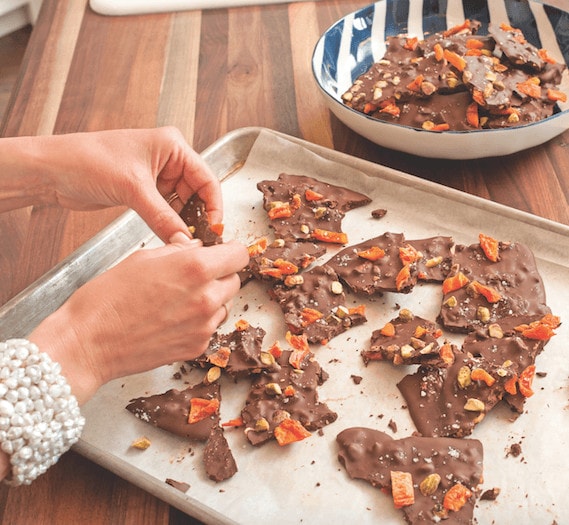