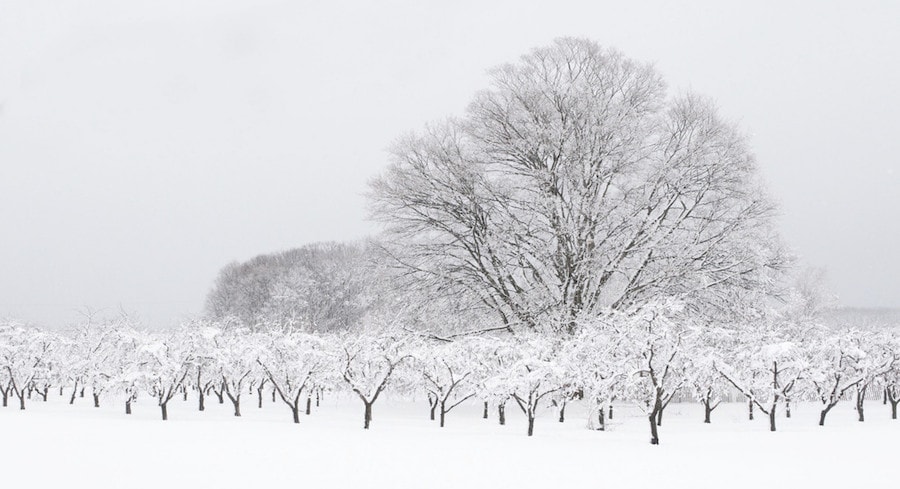 We didn’t call it a pilgrimage then. To us it was a matter of course like Christmas itself: the whole family, seven strong, would step out of our everyday frontier life and travel 40 winter miles for a two-day celebration of hotel luxury and glorious, prodigal shopping.

The story of a Christmas pilgrimage from Glen Haven to Traverse City was originally published in the December 1998 issue of Traverse, Northern Michigan’s Magazine.

Father was one of the early day lumbermen, whose business involved a great deal of shipping by water, and we lived in the tiny hamlet of Glen Haven, which was clustered around his docks on Lake Michigan. The Christmas shopping trip was our annual taste of the fleshpots.

It was mid-December and the snow was already deep in the north country. The journey began with an eight-mile sleigh ride to the nearest railroad at Empire. Father looked magnificent in a burly raccoon coat; Mother was splendid in unaccustomed sealskin and ostrich plumes; and of course, we children were under fur skin robes and swathed in mounds of coats, veils and muffs.

As we sped across the snow between the black and white winter hardwoods, our nerve ends literally vibrated with the sweetness of the Russian harness chimes. It was almost possible for us children to visualize that many-clappered music, as in the narrow canyons of plowed-out logging roads it rang out its imperious announcement of our arrival. The whole forest seemed to throb with a silver ecstasy.

At the railroad village, we caught a combination passenger-baggage-smoking car that had been hitched to the end of a log train. Logging railroads laced the country at that time. One rode them gratefully, perfectly willing to angle 30 or so miles in order to achieve what would have been 12 as the crow flies. We changed at various little junctions in the woods, moving from one coach caboose to another—all equally gritty with coal dust, pitted from caulked boots, dirty with tobacco juice, and nauseating from the smell of coal gas.

But past these grimy windows slid magic forests, and we children watched, enchanted by the miles of evergreens knee-deep, draped and garlanded in snow—a million Christmas trees whispering to us with a million voices, whispering to us of Christmas delights. We found ourselves wrapped in Christmas as in a cloud.

Eventually, the logging railroads merged with the main line. We waited for three interminable hours at a dingy little station for the big train that would sweep us into Traverse City. The early winter darkness fell while we waited, so that the train’s incandescent eye rushed down on us out of the night. The trainmen swinging on and off the train were mysterious figures whose lanterns made dancing pools of light on the snow.

This train was clean, smooth-riding, and well lit. In it, mother hooked furs, her fingers expertly working the difficult clasps of the period. Very quickly she straightened curls and retouched faces, while father, his rustic raccoon coat replaced by a well-tailored overcoat and visored sealskin pillbox, arranged for “carriages” with the Traverse City transfer. Father was inordinately proud of his lively brood. Nothing tickled him more than the fact it took two carriages to transport us.

The carriages—closed hacks on runners—were waiting under the station lights in Traverse City to gather us into their musty dark interiors. Slowly we glided across the viaduct into the shopping district. Here it burst upon us at last—a fairyland of lighted plate-glass windows, festooned with looped ropes of holly and filled with candy canes, life-sized dolls, mechanical trains and 10-foot toboggans. The jewelers’ windows winked with diamonds and heavy yellow bracelets rich on purple satin; deep red, yellow and purple fruit glowed in the window of an Italian fruit store and great boxes of loose mistletoe and holly stood outside on the sidewalk. Throngs of people hurried about on mysterious errands, their sleighs disappearing knowingly around corners while Salvation Army lasses rang bells beside kettles under street lamps!

Once at the hotel, there was the business of paying cab drivers, directing porters and marshaling us children en masse into the plushly mirrored parlors which smelled so excitingly worldly. There were smiling greetings from the proprietor and his wife, who were friends of Father and Mother. After miles of labyrinthine hallways leading to walnut, marble and red-plush bedrooms, we hastily freshened up and hurried down to the big dining room with its gliding, black-uniformed waitresses. Then came the supreme moment of ordering our own suppers from a printed menu. There were radishes with the soup, and crisp, green parsley garnishing the meat, although snow lay deep outside the windows—could luxury go further?

Mother’s methods with us were mass-production. Her first move the morning after we arrived was to run the whole flock of us through the hotel barbershop. Then she made group appointments for us with the dentist and the photographer. These necessities attended to, she turned us loose, each with a shopping list and the money we had been accumulating since July.

My older sisters, Alice and Eva, very prim and dignified, slipped away together quickly lest a younger one tag along with them. My brother David and I teamed up. That left mother with only baby Estelle to take with her while she shopped. In addition to gifts for the six of us, her list also included gifts for her family scattered all over Canada, Father’s family in Upstate New York, and gifts for the maid at home and for sundry employees’ families. We used to stumble upon her wherever we went, giving us a feeling of coziness in this strange vastness. She would be standing intently before a counter, or crossing the street half a block ahead of us, or sailing down the thickly carpeted hotel corridor toward us when we would return to unload parcels. How her hazel eyes and her swinging diamond earrings sparkled against the soft darkness of her fur collar! How deliciously she rustled, how regally her village-made broadcloth skirt swept back when she walked! No world-famed duchess could ever be half so chic.

Father had business at the bank, at the foundry, at the hardware store and harness shops. We saw him in the hotel at mealtimes, affable but elusive, and lost him immediately afterward to his concerns while we plunged back into the fairyland musical carnival atmosphere of the shopping district.

At night I awoke in the big bed and lay looking out through the opening between the window and the sill at the lights that pierced the city night, hearing the soft hotel stirrings going on all about me and the distant train whistles. The unfamiliar smell of coal smoke faintly nauseated me and I lay there vaguely disturbed by what seemed to my 10-year-old mind a massive violation of the night, nostalgic for the limitless star-hung darkness of my experience—the reassuring pine fragrance coupled with the rhythmic pulse of Lake Michigan.

But the two days were a dream of delight. When David and I had bought all of the presents on our lists, we spent our time savoring city life. We went to all of the crepe paper–garlanded moving picture “palaces” and criticized them expertly. We tried all of the ice cream parlors and Kandy Kitchens. We bought exotic fruit and armfuls of holly and mistletoe. We began to see ourselves as pampered sophisticates, spending money, amusing only ourselves, eating delicious meals, and pressing buttons if we wanted anything.

On the third morning, all of this magnificence went into reverse. The mounting excitement of our arrival ran the other way. The hacks took us in daylight from hotel to train. The trains to which we changed grew progressively dingier. When we got off the last one, our waiting three-seated open sleigh looked cold and crude. The mounds of coats were much more uncomfortable when donned in a cold station. Logging roads and snowy fields were dreary and commonplace after the splendor we had known. But when the sleigh dipped into the snowy forest tunnels and the whole visible world rang with the silver clamor of the bells, our spirits stirred again. That music escaping into the forest trailed a Lorelei song back over its shoulder—a song that was at once a promise and a challenge.

“Tomorrow,” David and I told each other, “we will go out into the woods—way back in the woods and find a Christmas tree. We’ll stay all day till we find a beautiful one, the most beautiful one we have ever had.”

Margaret Thompson Day Travis passed away in 1988. Her story is excerpted from Sleeping Bear: Yesterday and Today by George Weeks.

Click the cover to read MyNorth Holidays and discover more Up North traditions.