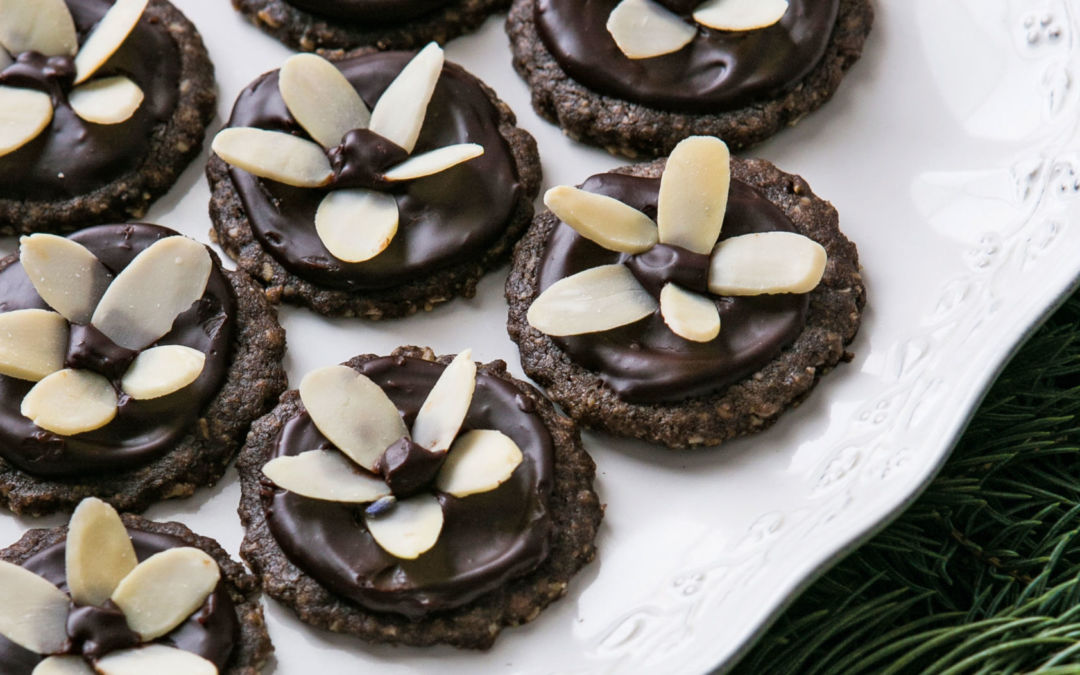 When Sari King’s life was crumbling, she fought back in the sweetest way she knew how: creating Crazy Woman Cookies. Now, she shares her favorite holiday cookie recipes with us.

Editor’s Note: With sadness we learned of Sari’s passing in 2018, having served her community for decades. She was not only a talented baker, but also an artist working in textile designs and weaving, and always enjoying Northern Michigan’s great outdoors. In honor of her wonderful spirit, we share this story as an encore of the original, which was published in the December 2014 issue of Traverse, Northern Michigan’s Magazine. Sari King lives in a wood-sided house that is stained the color of dried cherries. The kitchen, where the milky-white KitchenAid mixer sits out on the counter, smells of toasted sugar. Sari’s daughter, Jessie, and Jessie’s 4-year-old son, Christian, live with her in this darling home tucked into the forest just up the road from Walloon Lake. It is a house that looks like nothing much is awry within—and that, indeed, is the lovely ending to this tale. But because this family tends to be the dessert-first sort, we’ve served up the happy finale at the beginning.

Backtrack four years, and the home life here was not so stable. Sari’s husband asked her for a divorce, and six months later she was diagnosed with breast cancer. She had a job she loved, doing youth ministry, but it didn’t pay enough to cover the costs of the catastrophic turns her life had taken. Consequently, she was in danger of losing her house. In wracking her mind for ways to make money, Sari kept coming back to one idea: baking and selling cookies. She could sell at the nearby Boyne City Farmers market, to nonprofit groups for fundraising, as mail-order gifts… The notion wasn’t quite as naïve as it sounds. Sari and her children, her son, Britt, and Jessie, had always cooked and baked together. As far back as when the kids were toddlers, there were days when the kitchen counters were caked in “a storm of flour,” Sari recalls. Later, when Jessie was in high school and wanted to raise money for a trip to England, Sari suggested launching a homemade cookie dough fundraiser—an idea she’d gotten after making a critical appraisal of the commercial cookie dough fundraisers for her son’s hockey team (“It was just awful stuff,” she says). Jessie followed her mom’s advice, and her dough paid for her trip to England and then some.

With a plan in the oven, so to speak, Sari, working with Jessie and sometimes Britt, began testing and testing and testing recipes. Christian was chief taste-tester, followed by legions of willing friends. Along the way, Sari became an expert in de-constructing cookies—what made them chewy or crisp, what spices complemented what flavors, how much beating versus blending … Simultaneously, Sari jumped through all the necessary food-service permitting hoops, including renting space in the commercially certified kitchen at the nearby Horton Bay United Methodist Church. Finally ready, with 15 or so tried and true recipes in her repertoire, Sari and Jessie hit the Boyne City Farmers market under an expansive, blue and brown banner that proclaimed the business’s name: Crazy Woman Cookies. The name just seemed fitting after all that Sari was going through. The banner proved to be a great conversation starter. People couldn’t help but comment, things like, “My wife should be here,” or “Who is the crazy woman?” Sari says with a laugh. “We’d say, well, ‘There’s a story behind that name …’ ” she adds. Perhaps it goes without saying that Crazy Woman Cookies—Chocolate Hazelnut, Lemon Cranberry, White Chocolate Cherry Walnut to name a few of the varieties—are fabulous. Word got around, and the cookies sold well in Northern Michigan and as far away as California and Alaska.

But there was a learning curve. Sari found that shipping costs are nearly prohibitive for a small mail order business like hers. “If a dozen cookies cost $18 and it is $16 to ship them to California, you don’t make a lot,” she says. Around the same time, the Michigan Cottage Law (which allows, with stipulations, baking in home kitchens and selling the product) saturated the farmers market with baked goods. Adept now at changing her course, Sari began making soups and organic salads and salsas to sell at the market. Recently, however, she and Jessie have teamed up in a new venture, Green Plate Catering, a business that is so successful the two no longer work the farmers market. Crazy Woman Cookies lives on, now as a part of their catering menu. Sari has been cancer free for four years. In gratitude for all of the friends, family and community who supported her during her healing process, she and Jessie have set a goal (though they haven’t always been able to hit it) of giving 10 percent of their gross sales to charitable organizations. Number one on their list is Boyne City’s annual Pink Ribbon Bike4BreastCancer event.

And Sari still values the simple act of offering up a cookie to make someone’s world a bit better. “Looking back I’ve realized that crazy things happen to everyone,” she says. “Life is so uncertain. If I can give someone a little hope … a little bit of a sweet indulgence to savor a moment in life, then so be it.”