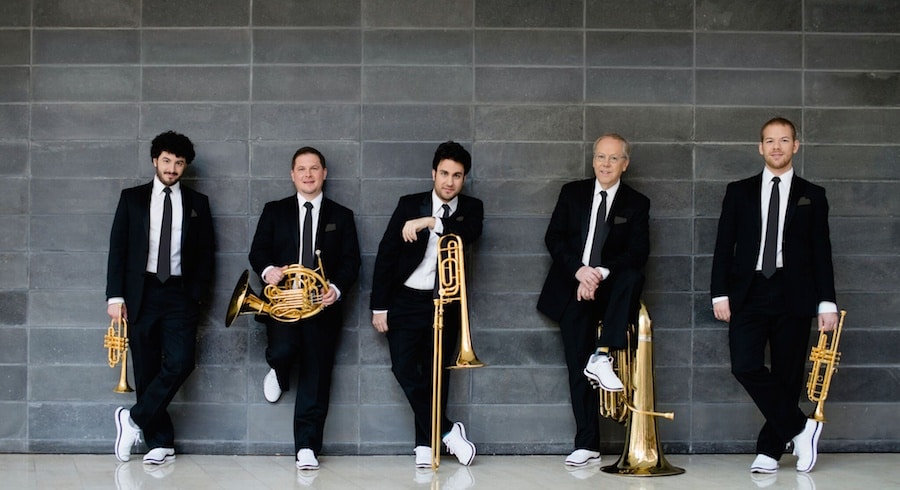 The Canadian Brass was formed in 1970 in Toronto, Ontario, by tubist Charles Daellenbach and trombonist Gene Watts. The brass quintet was one of the first groups of its kind, if not the very first. Today the Canadian Brass has been seen by hundreds of millions of people on television, recorded some 100 albums, and sold two million, and contributed nearly 600 new works and arrangements to the brass quintet repertoire. It has garnered three Grammy nominations, with a win in 2000 for music they commissioned from Peter Schickele; that win came at the expense of another Grammy-nominated Canadian Brass album. The group has secured a whopping 15 Juno nominations in its original home country. And it was the first brass ensemble to tour China and the first to play the main stage at Carnegie Hall.

Over the course of its 46 years, members have come and gone, some two dozen in all. Charles Daellenbach is the lone remaining original member, joined by a second generation of players: Chris Coletti and Caleb Hudson, trumpets; Bernhard Scully, horn; and Achilles Liarmakopoulos, trombone.

For Caleb Hudson, the group’s upcoming performance at Interlochen is a homecoming. The newest member of the Canadian Brass graduated from Interlochen Arts Academy and performed his first show as a member of the famed brass quintet locally last year at the City Opera House in Traverse City. Now he’s returning to Interlochen, 10 years after he graduated, as a member of one of the most prestigious groups of its kind.

We caught up with Hudson while he was touring Japan. He provided some insight into life as a musician and why the Canadian Brass and Interlochen are so important to him. 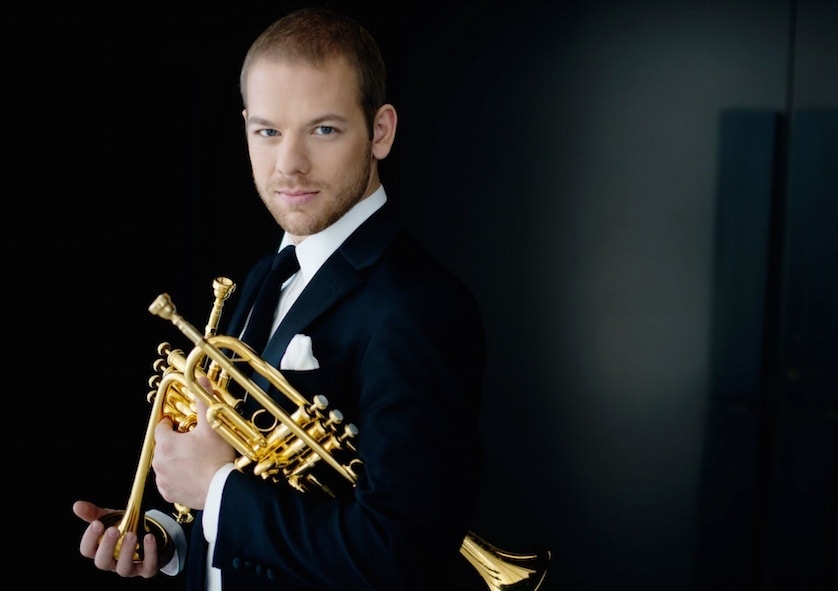 Why music and why trumpet?

It was a family rule that we had to pick an instrument and join the school band/orchestra by the fifth grade. Around that time, I remember going to my older sister’s high school band concerts and hearing a trumpet soloist perform in front of the ensemble. His sound captivated me, and I immediately knew that was the instrument for me. Soon after that, I was introduced to recordings of the famous trumpet soloists such as Wynton Marsalis, Louis Armstrong and Maurice Andre. But my first and most important inspiration was a high school trumpet player with a beautiful sound.

Did you grow up wanting to be in the Canadian Brass?

Just about every young brass player grows up listening to Canadian Brass. Its impact is legendary, its legacy is monumental. Not only is it an incredible honor to be a part of it, but there’s also a great responsibility. I’ve seen firsthand the connection that Canadian Brass has with audiences, students, music educators and music lovers around the world. There has to be an infinite amount of passion, energy and care in upholding that bond and seeing it grow into the future.

How did you come to join the group?

I attended Juilliard with (Canadian Brass trumpeter) Chris Coletti, and we were both living in NYC. When he called me one day to ask if I’d like to play duets with him, I thought nothing of it. It’s the kind of thing that happens all the time, catching up with a friend. It wasn’t until a few days later when he asked if I wanted to audition for Canadian Brass that I realized that this duet session was actually the first round of my audition. Of course, I was excited and couldn’t believe I was even being considered. About a week later, I met the rest of the group and played through a ton of repertoire together. Over dinner, I was asked to perform a series of trial performances with Canadian Brass, in addition to a live taping on Sirius XM Radio. Then the official invitation came to join the group. It was an overwhelming introduction to an incredible journey, and I am so happy to be a part of this ensemble.

Our connection to our audiences is paramount. We don’t have a preconception of what repertoire the audience needs to experience. Our programming and our entire approach to performance are shaped by the audience. It’s a relationship, and we value that feedback. Because of this, our programs contain a variety of stylistic approaches, from Baroque to Beatles, Monteverdi to Mariachi, Schumann to Dixieland and even brand new original compositions.

What are your thoughts on performing at Interlochen?

Canadian Brass has a long history of performing at Interlochen. However, it is my first time performing at Corson Auditorium since graduating from Interlochen Arts Academy in 2006, so it’s extremely important to me. Interlochen holds a very special place in my heart and was the most influential and formative musical experience of my life. There’s not a single place like it in the world. It was an environment that fostered creativity. It was a community that was fiercely supportive of each other. I met my wife at Interlochen, and many of my closest friends today were my classmates at Interlochen. Personally, December 1st will be a homecoming for me. I can’t wait.

The Canadian Brass performs at Corson Auditorium December 1 at 7:30 p.m. Tickets are $30. Go to Tickets.Interlochen.org.