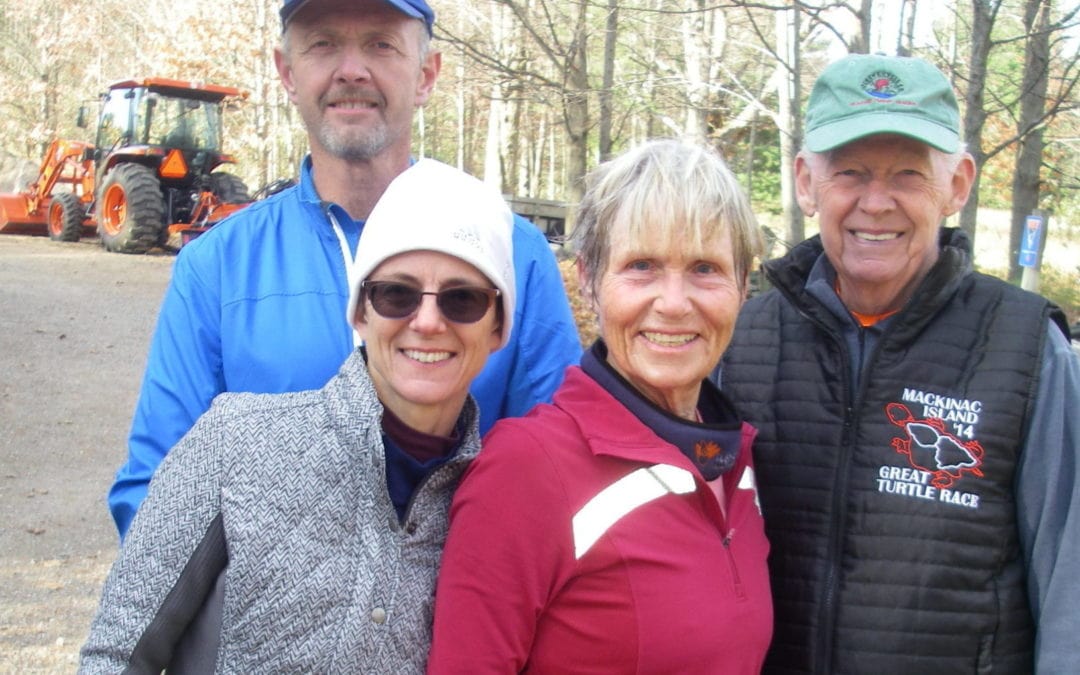 You are about to meet winners of the 2016 Vasa Run, 5K, 10K, and 25K, held at the Vasa Trailhead, Saturday, November 12. These folks were not the fastest runners, but they are winners because many of them overcame obstacles in life, in part due to their passion for exercise and running.

Race director Jen Teeples welcomed 218 hearty souls for the 30th annual version of one of the oldest trail runs in the TC area. Proceeds from the Vasa Run benefited the Vasa Trail. The race was sponsored by the Running Fit Store. The race was held on the beautiful Vasa Trail, filled with rolling hills, lovely vistas, and gorgeous fall colors. Runners, greeted by cool temperatures, were warmed by the body heat generated by running and walking.

Meet Dorothy Johnson, age 72, from Indian River. Dorothy and I chatted and ran the 10K together for about 4 miles until she took off and finished far ahead of me. Dorothy had major cornea surgery one year ago, and suffered three months of blindness. She has fully recovered. Dorothy has completed 27 marathons, among them the famed Boston Marathon and the Great Wall of China Marathon. She was honored during the last Bobby Crim 10-mile race, in Flint, for having completed the race 30 times. She spent three weeks running in Peru and in Germany. She started running at age 41. Dorothy is a proponent of the philosophy, “If you want to see a country like no other tourist, run its back roads and trails.” Dorothy and her husband, John, 72, started the Indian River Strider Running and Walking Club. John suffered high cholesterol, which has dropped more than 30 points since he began running. John dropped all statins when he and Dorothy started maintaining a plant-based diet.

Meet Scott Halford, 55, Johnson’s friend from Alanson. Scott easily won my big loser award. At one time, Scott—who’s 6’4”—weighed 290 pounds. He dropped to 186 pounds, but re-gained weight to 265 pounds. Tests at Mayo proved he had a leaky gut, sensitivity to gluten and an RA over 300. Today, the RA is 15 and Scott dropped from a 42”- to a 32”-waist! He also discovered he had low testosterone, which has been corrected. Testosterone is a hormone that protects the heart and bones. Adrian Agria, age 50, from Petoskey, started running at age 42. She qualified and ran the Boston Marathon the year after the Boston bomb blast.

Meet Eric Manley, 58, from Mt. Pleasant, who lost weight. His buddy, Eric Lavson, of Canton, age 57, lost 40 pounds. Their friend, Tom Houdek, 57, of Canton, runs because it makes him feel good. Jerry Rex, 65, of Lima, Ohio, runs because it makes him feel physically better and helps him get rid of the effects of too much alcohol and drugs ingested as a youth. How many of us can relate? As a testament to the economic value of these events, Jerry and his friends stayed in a motel, ate in restaurants and bought gas in the area. These events improve our area economy. Fred Walters, 64, from near Grand Rapids, runs because it helps him with tension and overall health. And lastly, meet 14-year-old Jake Lathrop from Kingsley, accompanied by his mom and dad. Jake ran the 10K today, but he loves to compete at all distances. He set the 2-mile record in his eighth grade class.

Jen Teeples hopes you will join her for next year’s Vasa Trail Run. You’ll feel better for the effort, and you’ll experience a delightful race. Remember to always ask your doctor before starting an exercise program.

Mickey Fivenson, 74, of Traverse City, is a stroke survivor. His doctor credits running for Mickey’s survival. Mickey is the former director of the National Cherry Festival Races. He founded the Cherry Festival Golden Mile and Wheelchair Races. He has completed over 60 marathons and holds a marathon record with his sons, Zack and Adam. He has trained 150,000+ miles in 48 years. Mickey, along with his Bouvier, Zoe’, placed in his age group in this year’s Vasa Trail Run.