Applying a blend of explorer, tinkerer and perfectionist to the baking arts, Lauretta Reiss has fast earned a devoted following at her Harbor Springs bakery, Small Batch. She shares her spirit and holiday recipes here.

I’m a baker who prides herself on her well-honed, beloved chocolate chip cookie recipe: that deep toffee flavor, that perfect ratio of cookie to chocolate, that chewy texture. It is, in a word, flawless.

I’ve bragged up my cookies and their brown-buttered goodness on my blog, on social media, and at my nephew’s class parties.

So when my brother Richard, perhaps the most discerning eater I know, told me one summer day a few years ago that he’d just eaten the best chocolate chip cookie of his life from a new bakery in downtown Harbor Springs, I got very quiet, very solemn, indeed. I looked to the children to see if this was for real. “Aunt Maureen, it’s true. You’ve GOT to try this cookie.”

I had to admit that the bakery did have a trustworthy name: Small Batch. Just the way I’d want a cookie that’s supposed to be better than mine to be made, on a small scale. When I saw the offerings from the bakery, I was surprised my people had gone for the cookies, when right there next to them were such glorious cupcakes piped sky-high with Swiss buttercream.

But with the whole family standing by, I was forced to hold off on the buttercream and order one of the Salted Chocolate Chip cookies.

“Great choice,” said the woman behind the counter, with a smile as big as the cookie. “It’s SO delicious!”

We hunkered down on the curb outside the shop so hands large and small could reach for a corner of the cookie. The sea salt was visible on top, a perfect balance to the golden sweetness beneath. We ate in silence. My brother mentioned he tasted coconut. I turned back to the woman and asked, is there coconut here?

“Just a touch,” she giggled again. “But the real secret,” she whispered, “is brown butter.”

Then and there I knew it: I just met the baker of the best chocolate chip cookie I’d ever eaten.

Clearly, this wasn’t Lauretta Reiss’s first rodeo in professional baking. Or was it?

“Not so much pro-baking,” she says, “but creative designing. Branding. Theme. And travel all over the world, enjoying pastry and cuisine at its finest.”

Lauretta has been exuding creativity all her life, growing up downstate in a family that placed art at the center of life—her mother was a graphic illustrator and a potter; her father a contractor who embraced all things artistic. “I can’t remember ever not drawing and being encouraged,” Lauretta says.

So 20 years ago, when her then-husband, Scott, who worked in the shoe industry, asked her, “Can you draw a shoe?” Lauretta laughed the question off. Because of course, of course, she could draw a shoe, and not just a good shoe, but a great shoe. The next thing she knew, Lauretta was whisked off to the Big Apple to meet fashion designer Joseph Abboud, to see how their personalities would mesh and to audition her sketches for his menswear shoes.

Turns out everything meshed more than fine. Within a year, the label was nominated for footwear designer of the year. Once that happened, everyone wanted to know who was doing the Abboud line. Lauretta’s work took off within just a few months, and ultimately she was recruited by Rocket Dog as design director. She even launched her own line in the midst of all of that, living for a time in Italy where the shoes were made.

Yet at the height of her shoe-designing career, Lauretta had designs of another sort on her mind.

All of the travel, many hundreds of trips to Europe and Asia, left Lauretta exhausted. “I defined ‘sick and tired’!” she laughs, describing how the demands of the fashion industry, the grind, stifled her natural creativity.

It was Christmastime 2012 when she headed back to live in her happy place, her longtime getaway in Harbor Springs. Her friends back in L.A. and Chicago and New York were in disbelief that she could live in such a small community.

Her “retirement,” though, didn’t last long before her creative juices were unleashed again, but hardly designing shoes. “I told people, what I really want to do is open a bakery,” she says. “They said ‘Whoa, hold on here!’ And I said, NO!—I know exactly what I want.”

Within three short months, in May 2013, Lauretta opened Small Batch on Main Street. She didn’t realize it would take some time to get her license, but “that’s just me,” she says. “I like to jump right in!”

Lauretta’s version of jumping right in meant no stops along the way for culinary school, no shadowing others for how-to. “I hone in on recipes and perfect them until they are excellent. It’s just how I am wired.”

She’s happily “self-taught and family-taught” in the ways of the kitchen—the influences are present on Lauretta’s inventive menus in the bakery and at her latest expansion at Small Batch at the Cupola Room. “My mom was such a great cook,” she says. “There were no boundaries for her. We ate a lot of Filipino food—lumpia spring rolls, adobo, rice with every meal. I longed for potatoes! But here I’ve got her fried rice and eggs on the menu, and her egg rolls.”

Similarly, the over-the-top pastries that are the mainstay of the Small Batch bakery are built on recipes from Lauretta’s German grandmother. “Her recipes are a base for me: her lemon cake, her chocolate chip cookies, both of which I’ve tweaked by browning the butter,” she says. “I use the same recipes, but they’re improved upon and modernized.”

There is another recipe Lauretta uses that is perhaps most important of them all—a magnetic sense of humor and whimsy, one that can’t be missed in her shops: the little metal dog hanging over the counter that greets customers … the lineup of luscious mile-high cakes topped seasonally with reindeer or snowmen or butterflies … the mix of vintage and new … the windows draped in a cascade of snowy tulle that keeps customers peering in long after the “closed” sign is turned. The Small Batch vibe is very big, and very welcome in Harbor Springs.

“I’m in awe over the reception we’re getting,” Lauretta says. “The excitement about what we’re doing drives us forward into newness.

“Our saying at the bakery is, ‘If it’s not great don’t do it.’ Good is boring!” Lauretta says of her approach. “I want the experience to be unforgettable. Then, when it’s gone, it’s gone. There will be more tomorrow! 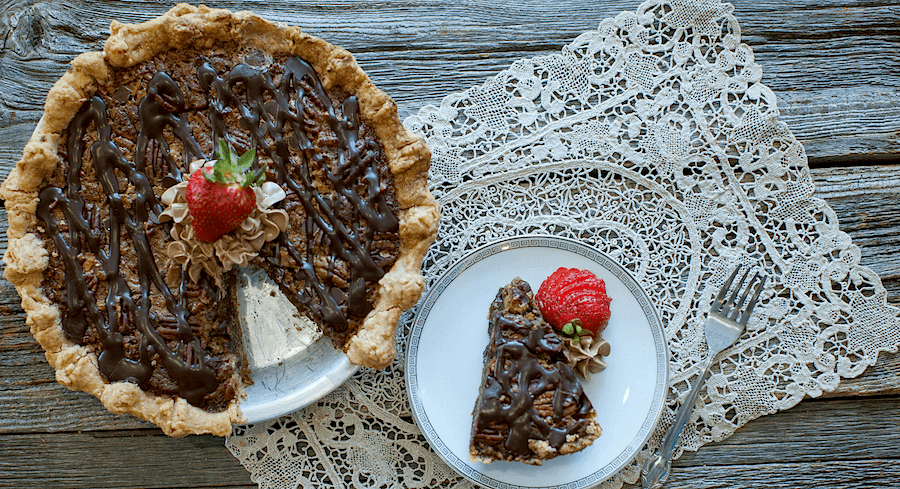 In shoe design, the financial stakes were so high with every exploration—in food, in trying something new, no such stakes exist. The sky is the limit for Lauretta, and for all of us.

“Just jump in and try my recipes,” she says. The delicate pear dumpling with caramel sauce, for example, “may be involved,” she says, “but it’s not complicated. Have a sense of humor about it, and you can do it! It’s so worth it.”

The chocolate bourbon pecan pie takes the standard Thanksgiving pie to another level—with more pecans, with chocolate and bourbon. “Those are three elements I just love. I’m not sure in which order … depends on the day …” Lauretta laughs.

“What’s the worst that can happen?” she says about holiday baking—an experience that can involve, shall we say, at least a hint of stress for many of us. But hers are words Lauretta lives by. The day we talked, the bakery oven had broken, with a lineup of her tremendous quiche waiting to be baked for orders and catering. I offered to reschedule, but for Lauretta, no need. “They’ll show up to fix it today, like they said they would,” she said. “No worries.”

With that she turned to help the last customer of the day, who surveyed his tough decision and picked a chocolate chip cookie. “Great choice!” I chimed in from the sidelines. “It’ll be the best you’ve ever had.”