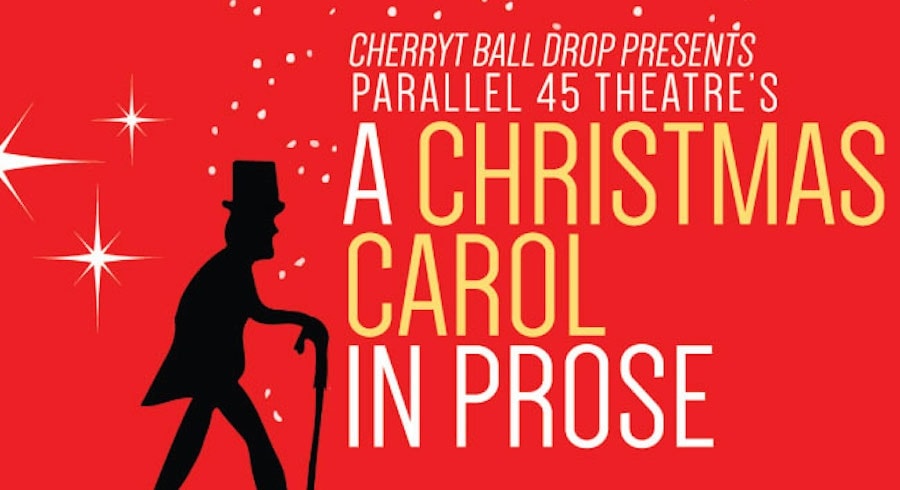 How do you bring new life to an old story? If you’re Parallel 45 Theatre, you start with the source, then look for a new way to tell it. That brings us to A Christmas Carol in Prose, a new version of the classic Dickens story.

The theatre group will be presenting 20 performances at the City Opera House, running from December 1–December18. The play was adapted by Parallel 45 company member Ben Whiting, using only the words of Charles Dickens. But if you think you’ve seen it all before, Erin Anderson Whiting, the troupe’s executive director, assures that is not the case. “It’s different—the Parallel 45 way,” she says with a laugh.

Different for a start in that the seating at the Opera House includes a U-shape in front with tables, so little ones can watch from a rug in the middle of the U. And different in the fact that while much of the action takes place on stage, actors will also roam the entire facility, from the main floor to the balcony. Throw in some illusion effects and occasional audience participation, and Whiting says those in attendance will feel as if they are in the middle of the story.

And that special children’s seating? Whiting adds that is just part of the family-friendly performance for ages 5 and up.

“They’re up close to the action. It’s fun for them. We encourage them to be kids—there are places where they can participate. The only things are: there is one complete blackout and some loud noises. There are some strobe-like effects,” she adds, so there may be some concern for individuals on the autism spectrum.

The performance is being directed by Parallel 45 Artistic Director Kit McKay. The cast includes William Church, the Director of Theatre at Interlochen Center for the Arts; Noah Durham and Shelby Lewis of Traverse City; Justin Perez from New York City; and Katharine Mangold from London.

Behind the scenes with the cast during dress rehearsal

The show is being produced by CherryT Ball Drop, the local nonprofit organization which raises money for food banks and other charities in the Grand Traverse region. All the proceeds from the show will be donated to local charities, says Christal Frost, one of the founders of CherryT Ball Drop. All the groups volunteering as ushers for the show will receive a donation. “When the show’s run is done, we’ll see how much we’ve made,” Frost says. The group will be taking applications from local non-profits and its board will then determine how to disburse the money.

“This is so new to us,” adds Frost. This is the first time that CherryT Ball Drop has engaged in a program of any sort other than its yearly party on New Year’s Eve in downtown Traverse City. Frost says this type of presentation is something she’s had in mind from the beginning. “I had this fantasy years ago. I wanted it to be more than a New Year’s Eve event.”

She and Whiting are hopeful audiences will embrace the show and the opportunity to make good on A Christmas Carol’s premise. “I think it’s the most important story of the season about empathy,” Frost says. “Everybody’s had a tough time at some point during the holidays. That’s why I think people empathize with Scrooge.”

“It’s high-energy. There’s not a moment of downtime,” Whiting adds.

Tickets and more information:  $13 to $35. Go to CityOperaHouse.org