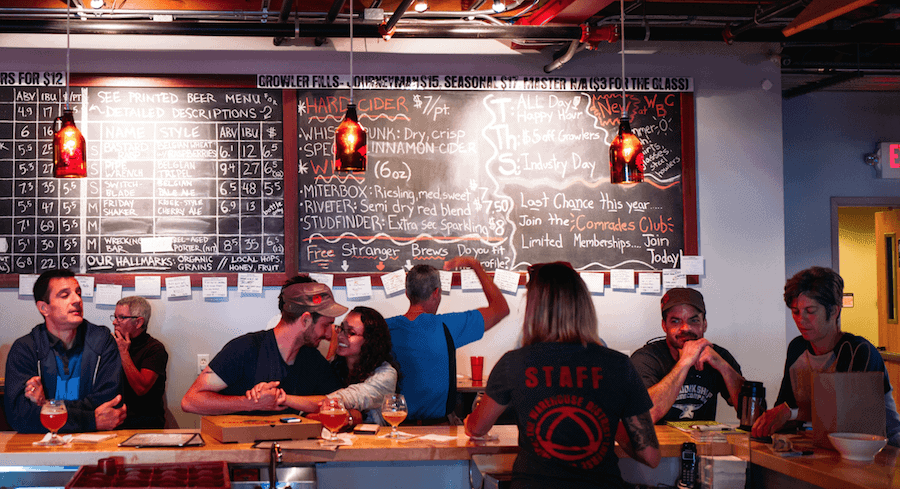 The live, on-stage Traverse City storytelling series Here:Say TC launches its fourth season Monday, October 17. We touched base with founder and storyteller in chief Karen Stein, asking her to share thoughts on show themes, the time performing at the now-closed InsideOut Gallery and Here:Say’s new venue.

So all of Traverse City’s live performance fans were heartbroken to learn that the venue you have been using, InsideOut Gallery, was closing, which meant Here:Say had to find a new event space. Where did you end up?

“We are going to be in the Workshop Brewing Company, right next door to InsideOut. So the good news is, all people have to do is go across the sidewalk to find us.”

What floats to the top when you think about your time at InsideOut?

“Ever since the second show we have been at InsideOut. It was just so great that Mike Curths [owner] was willing to take a chance on us. We weren’t anything at the time. Not a proven entity. It was phenomenal to watch the show grow in that space, see people convening there. But we are excited to try our new home, and are working on the layout now.”

Each show has a theme and all the storytellers share a true story that relates to the theme … What’s a favorite theme for you this season?

“We look for universal themes, things that are big enough so that the stories won’t all be about the same thing. One of my favorite things about Here:Say is the range of stories on the same topic. Like one show theme this season is The Birds and the Bees. You might expect it to be all about sex, but don’t be surprised if there’s a story about an apiary. One theme I’m really looking forward to is 2br/2ba. It’s a roommate show. If you have ever had a roommate, you have a story to tell.”

Give us a flyover of the event, how the show unfolds.

“There’s an emcee who guides the show start to finish. That person will introduce each performer, and before the performers tell their stories, they will answer a question—each answers the same question—and they just give a brief answer. Then they tell their story. Each story is about 10 minutes and it has to be a personal story about something that happened in their lives and relates to the theme in some way.”

So Here:Say is basically Traverse City’s version of Moth Radio Hour, which is hugely popular as a radio show and as a live touring performance—when Moth was in Traverse City recently, it sold out in a heartbeat at $50 a ticket. What is it about this format that captures people’s fascination?

“There’s something so giving about somebody making themselves vulnerable like that. I feel like I really get to know people even if the story is the only thing I know about them … you just have this sense that you know a person after hearing their story.”

How do you find storytellers?

“Word is getting around! We have a full lineup for the first show already, with several new people asking to join the fold. The first show’s theme is Brand New Day. We have eight shows—the third Monday of the month from October through May—and we already have at least one storyteller signed up for each show.”

Advice for storytellers wanting to share a story on your stage?

“I am continuing my requirement that if you are new to the stage, let’s meet up and talk about storytelling. I had two performer meetings with new people last week. I’m pretty excited about how the interest is growing.”

Why did you start Here:Say?

“I have a master’s degree in writing from Columbia College in Chicago, and we would do readings a lot, and I missed that, writers reading their work. Here:Say went more in the direction of live storytelling, but it was just something I wanted to see. I wanted to be in the audience for something like this, and nobody was doing it at the time. And I wondered, Why don’t I just do it? What am I waiting for? It’s been really gratifying and I’m really glad I did it.”

See a live Here:Say TC performance at 7 p.m., the third Monday of every month, October through May, at Workshop Brewing Company. More, including podcasts of previous performances, at heresaystorytelling.com and Facebook. 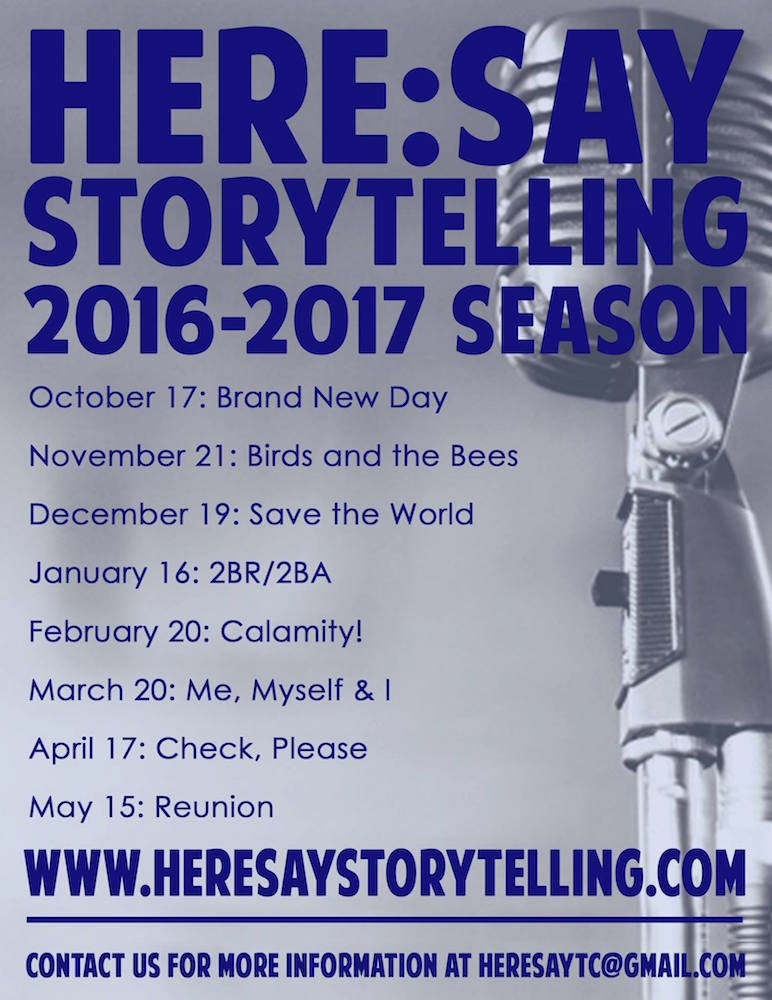