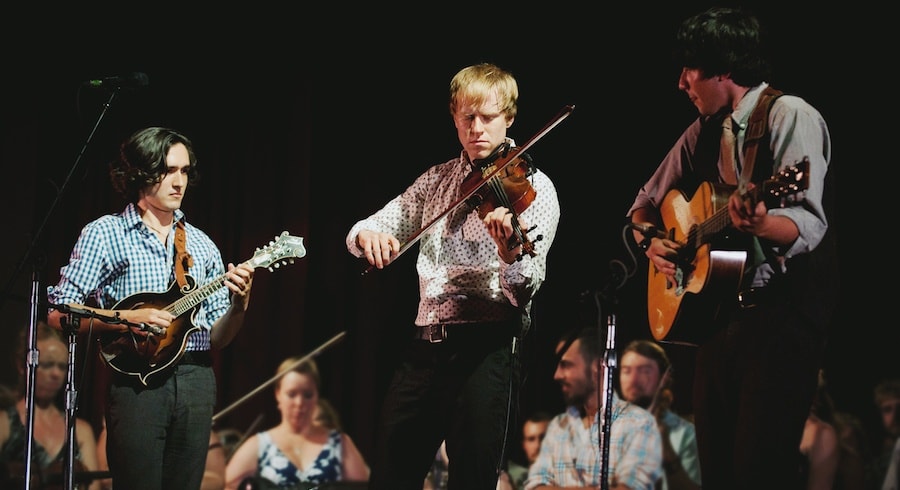 Jeremy Kittel, Michigan native and internationally-known violinist, and his trio are performing this weekend in Traverse City and Manistee. MyNorth Media’s entertainment writer Ross Boissoneau fills us in on the group’s background and accolades.

Michigan native Kittel grew up in Ann Arbor and Saline, earning his undergraduate degree from the University of Michigan and a Master’s in jazz violin from the Manhattan School of Music. He credits his parents with his interest in music. His mother built instruments, such as dulcimers and banjos, and had Kittel and his brother and sister take lessons. He saw his older brother playing violin and was smitten, and began like his brother with Suzuki at age five.

Classical lessons soon followed, and after attending the Scottish Games in Alma as a pre-teen, he began taking fiddle lessons as well as going to Scottish fiddle competitions, festivals and Irish sessions in Ann Arbor. Kittel soon began finding his way in bluegrass as well, and began studying jazz while in college. Today he’s at home in a variety of settings. Kittel has worked with a number of other musicians; Paquito D’Rivera, Mark O’Connor, Edgar Meyer, Chris Thile and the Assad brothers prominent among them. He also was a member of the jazz group Turtle Island Quartet for nearly five years.

In 2015, Kittel co-composed “Bull Frogs Croon,” a new orchestral work featuring himself and vocalist Aoife O’Donovan as soloists. He is currently working on his fifth solo album. In addition to his own projects, he has composed and arranged for such artists as O’Donovan, Abigail Washburn, My Morning Jacket, Camera Obscura, Jars of Clay, and Yo Yo Ma and the Silk Road Ensemble. He has been a guest artist with several symphony orchestras, was twice featured on A Prairie Home Companion, and has performed around the world at venues as diverse as Carnegie Hall, the Kennedy Center, Bonnaroo and the Celtic Connections Festival in Scotland. Kittel is committed to the belief that music and the arts are central to the human experience; the passionate clinician and educator has taught at such programs as Berklee College of Music, Belmont University, The New School, International Music Academy of Pilsen, Zurich University of the Arts, Mark O’Connor Strings Camps, the Swannanoa Gathering and Valley of the Moon Scottish Fiddling School.

Kittel is joined by his trio, mandolinist Josh Pinkham and Quinn Bachand, who plays guitar, banjo and bouzouki. The three appeared this summer at Lake Street Studios in Glen Arbor as part of the Manitou Music Festival. By the time Pinkham was 14 he had played on stage with nearly all of his mandolin heroes. He continues to push into new and old territory, including bluegrass, newgrass, jazz and classical music. David Grisman called him “one of the most important young improvisers on the acoustic scene today.” Bachand grew up on British Columbia’s Vancouver Island, the son of musicians who introduced him to the violin when he was 4 and the guitar at age 10; Bachand’s father is a luthier who custom made his son the guitar he now plays. He performs with his sister Qristina and has also toured nationally and internationally with Canadian fiddling icons Ashley MacIsaac and Natalie MacMaster.

“They are some of the best musicians I’ve ever met. I’ve been blown away by their creativity, spontaneity and commitment to their craft. They’re on par with any of the great classical artists we’ve had here this season.” – Olympic Music Festival artistic director Julio Elizalde

“As he traded licks with special guest Darol Anger, it was easy to see Jeremy as one of the leaders of the next generation of the virtual ‘republic of strings.’” – Fiddler Magazine