Each fall, the colors of Michigan’s Upper Peninsula draw photographer Erik Olsen to roam the trails and byways of this storied land. Here he offers places and tips for your Upper Peninsula fall color tour.

Each fall, one way or another, I try to head to the U.P to craft my own Upper Peninsula fall color tour. I have turned it into an annual pilgrimage, something I started in college, and I don’t take on any assignments during that time unless they’re related to this trip. I’ve come to see this journey as ‘me’ time, totally a chance to recharge for a spell. It’s probably my second favorite time—first being winter—to be in the U.P. Fall is just the season to be there. It’s the essence of the outdoors in Michigan. When I leave that sacred land and cross south over the Mackinac Bridge to head back home, I’m rejuvenated.

In fall of ’15, I decided to cover as much ground as I could in the 14 days I was there, traveling to spots where I knew I’d find fall color. I started in Newberry, with the plan of working my way west to the tip of the Keweenaw: From Newberry to Grand Marais, Munising to Marquette, with stops all over the Keweenaw and into Copper Harbor. It’s always tough to try and judge when color is going to actually happen, and I left on October 9—later than I was expecting. It always seems the first or second week of October is the peak. I was a little bit late by the time I got to the Keweenaw, but of course, it was still gorgeous.

Kids and their families, they’re all back to school and work in autumn, and so it’s really quiet up here. The people you do see are traveling through with cameras. It’s just a really peaceful time to be up here, and I’m reminded of when I started going here when I was young, with my dad and sister on backpacking trips. In the U.P., you’re driving places that feel like a whole other world. You can hop in a car in the evening and be in a place that’s so different. I grew up in Traverse City, went away to school at Ferris State for six years, and came screaming back to the north.

I follow fall color tracking sites, which give you a percentage of leaf change, and I learned you always watch the weather. If a large cold front moves in, or some high winds, things can change very fast. Around the time I got to Marquette, I had four days of peak color, which was unreal. Then we had high winds, and everything stalled out immediately. I felt pretty blessed to have witnessed the color before the weather change.

I spent my first night in Newberry and was at Tahquamenon Falls (check out the falls here in this MyNorth video) first thing in the morning. I camp, though much of the time I try to slide in somewhere completely obscure and sleep in my car. It depends upon where you are—rest stop areas or things like that. I’m a pretty easy-going person. I don’t have a problem with living a little unglamorous to do the things I want to do. 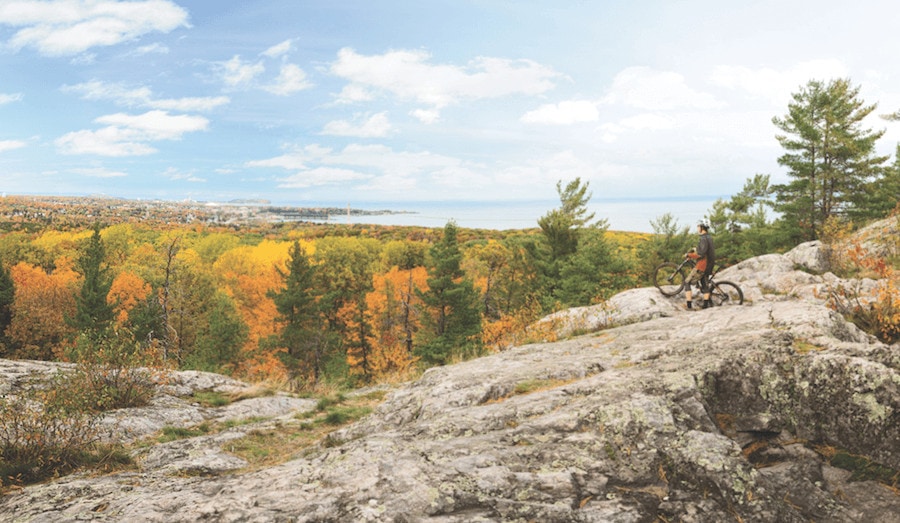 I had hit Newberry before the full color change—there was still a lot of green—and I did end up getting shots of beautiful lush greens with  these fiery yellow leaves stuck to them. It makes for striking imagery. I was definitely excited I hadn’t missed it yet. The first morning you get up, you see that scene in the area and you’re hoping to shoot and it’s not late. You feel your timing is right and you can focus on the picture—it’s a good feeling. At Tahquamenon Falls, the brown tannins in the river water always pick up very well. You never get a full white veil of water, and you never get a full tannic, root-beer-colored waterfall either. You get what looks like someone took a paintbrush to it, strips of color.

I shot at Tahquamenon in the morning and took the middle of the day to travel to Munising and the Pictured Rocks National Lakeshore, which I know really well. I have a plan for when I get there: one of my favorite hikes, going into the Chapel Basin area. It’s a nice triangle loop, starts in the parking lot inland and no matter which direction, you pass waterfalls and a lovely trail. You go to the beach in the early evening and you’re there well after dark. I’m kind of jumping around falls. In my opinion, if you’re going to see one thing and want to see the Pictured Rocks, Chapel Basin trail is a one-stop shop. It’s an awesome trail run if I’m not carrying a camera—everywhere you go there’s beautiful vistas or wonderful waterfalls. It feels very remote even though you’re on a well-marked trail. 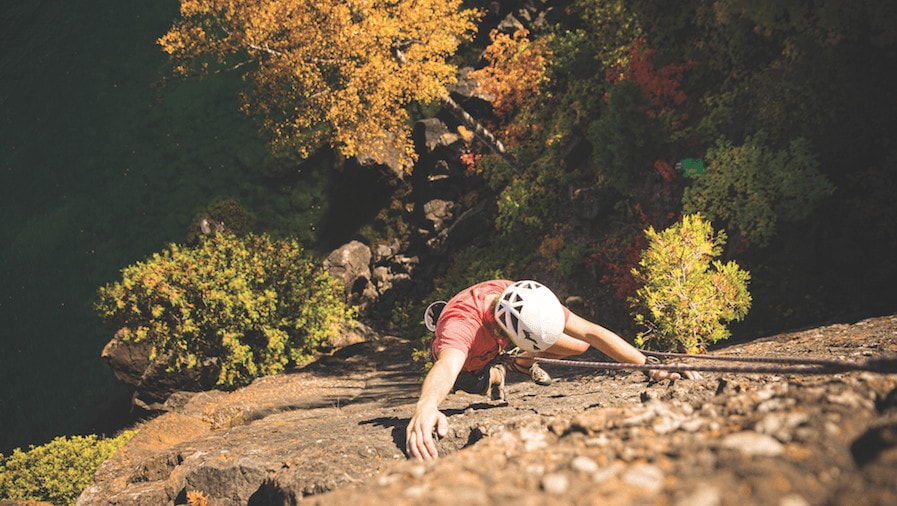 I woke up in the morning in Marquette. I slept in the back of my car in the Wal-Mart parking lot. One of my goals was to experience the town for a few days. I spent the 11th, 12th, 13th all in Marquette before I moved on. I got up in the morning and went out to Presque Isle, which is right in town, where some buddies were rock climbing. It’s an intimidating start—it’s called the Pinnacle and you’re teetering on top of a very pointy small section of rock. It’s amazing, it’s right on Presque Isle, where thousands of people pass every day, and don’t know it’s there.

The Marquette area has 15 rock climbs—more if you know the right people. Marquette, in general, gives you an out-west, mountain-town feel. It’s a great place to be. You can do just about anything you’d want. The people there are excellent at managing their time. They play hard. I just wanted to make sure I got shots of the climbers, so I roped in and hung off a little bit, thinking that getting some climbing shots would be neat right there during fall color.

Marquette Mountain, the downhill ski area … it’s a beautiful drive. You drive and walk a couple of feet to mountain bike trails that surround the whole mountain. It’s a stop where people will frequently jump off the trails and onto the two-track. The rocks up there are phenomenal to ride. Easy to ride on and quite a lot of fun, with views of Lake Superior and Presque Isle. A storm rolled through one night and I had a great morning in Marquette to shoot surfing. I’m always geeked about that. I hang out with my climbing friends, biking friends, surfing friends. I did shoot a little freshwater surfing, with the high winds, which took a lot of the fall color off and was a bummer. But I got to shoot some surfing. 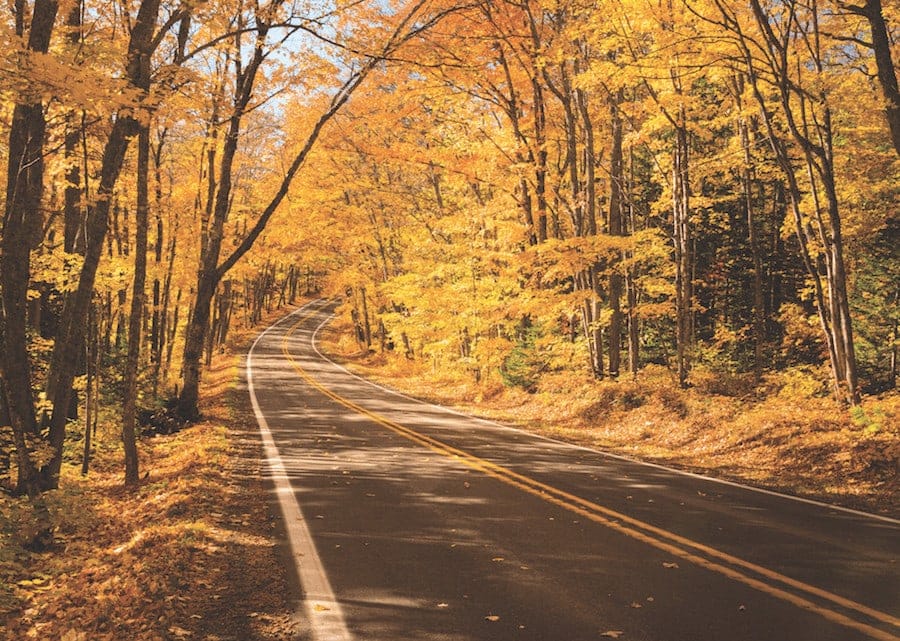 From there, it was on to Bond Falls, which is basically off US45, right below the Keweenaw. I drove again through the night, slept in the parking lot, and I shot Bond Falls with the sunrise. It’s really tricky in the morning there because it’s backlit—you’re shooting into a shadow of the falls and there’s light coming up behind the falls. It’s not a condition that landscape photographers want to shoot in.

 It was a beautiful misty morning, it had gotten very cold that night, with crystallized ice on the walkways. It was almost too foggy to shoot the waterfall. But when the light came breaking through, I got some good shots, a lot of leaves had fallen at that point and there was a beautiful blanket of fall color on the ground. It was one of those serendipitous moments. You wouldn’t go shooting in those conditions, but for me, the tougher the better.

I made my way to Houghton, I was meeting up with a friend I met over the years when I was shooting a lot of automotive rally racing. My fixation on rally racing started out with a love of cars. That’s faded as I’ve gotten older and have more of an appreciation for the outdoors.

But automotive rally racing, it has huge roots in Michigan and in the U.P.—the Lake Superior Performance Rally is one of the oldest rally races in the United States, a large multi-day event. I had a friend with me at this point, a friend who has a vintage replica rally car. We drove basically all the way up to Copper Harbor, and I was shooting his vehicle a little bit, on Brockway Mountain, which used to be the closing stage for this rally race. I wanted his old historic rally car on that road, immersed in the fall color.

I knew I had the shots I wanted and tried to enjoy the ride back. The transition of fall color, the less vivid yellows and leaves turning to brown, it will happen almost overnight. Typically if you can spend four days up here, you can definitely see the best and then the transition to a cool palette of muted natural colors, with maybe a few pops of color.

Featured in the October 2016 issue of Traverse, Northern Michigan’s Magazine. Get your copy.