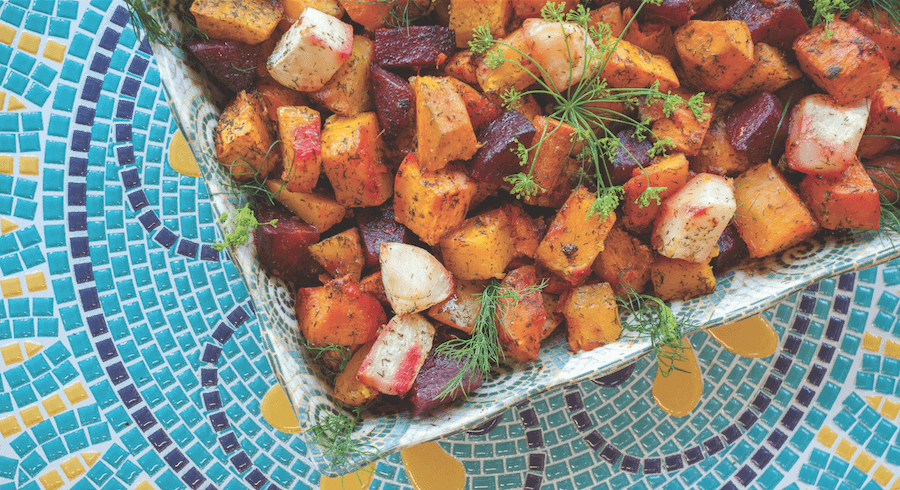 Nada Saco keeps the tastes of her childhood close to heart and always close at hand: olives and their oil, mint and parsley, lemons and robust whole grains. As a child in Iraq she watched her grandmother and mother chop, dice and simmer those classic Mediterranean ingredients into heavenly, healthy meals. Later, when her family moved to Greece, Nada found the same familiar flavors and textures in the cuisine, only tweaked and transformed a bit into a whole new gamut of classic dishes.

Fond as she was of the food, it wasn’t until Nada moved to Northern Michigan, married and became the mother of a growing family, that she made the flavors and ingredients of the Mediterranean her own. That culinary journey began with baklava she made as a fundraiser for her son’s hockey team. Nada hasn’t stopped since—matching her deep love and adeptness for the fresh cuisine of the hot sun with her warm, wide-open personality.

Since she opened Nada’s Gourmet Deli and Mediterranean Cuisine inside Saco’s Liquor Store, Nada has filled the deli case with heaping platters of tabouleh, humus, stuffed grape leaves, sandwiches ready for the panini press and so much more—all made with as many locally grown ingredients as she can find.

Preheat oven to 375 degrees. Wash, peel and dice first six ingredients into 1 1⁄2-inch pieces. Place in a large bowl and toss with olive oil, dill, salt and pepper. Spread out evenly on a roasting sheet and bake for 1 1⁄2 hours. Drizzle with balsamic vinegar before serving.