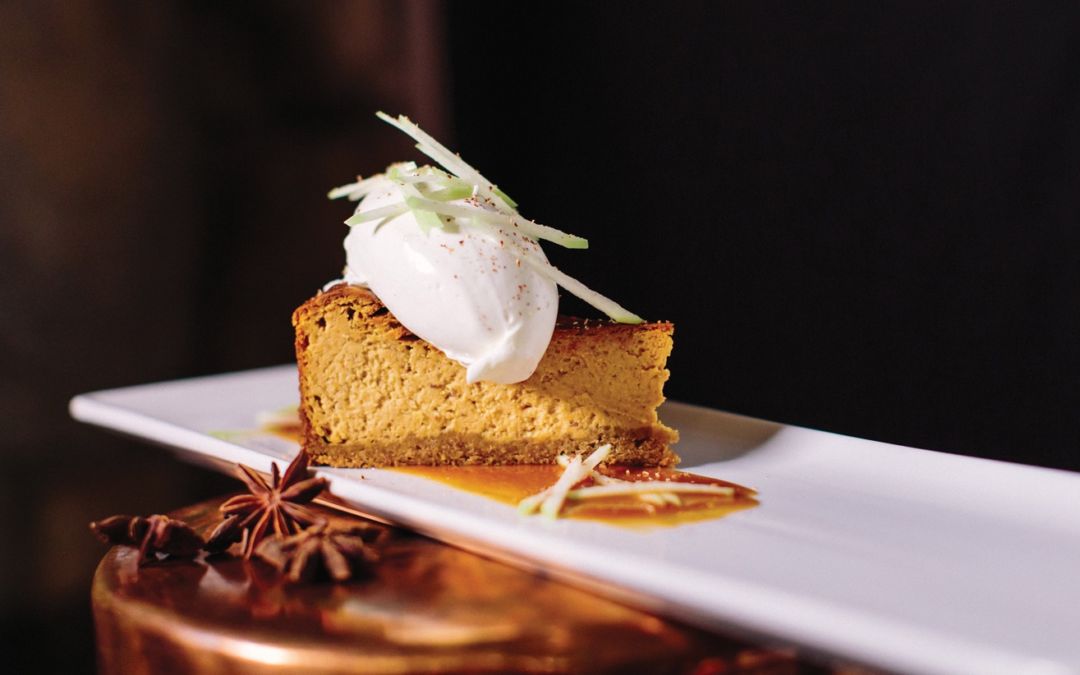 Pumpkins signal autumn’s arrival and, luckily for the customers of Chandler’s in Petoskey, inspires the culinary imagination of Chef Tommy Kaszubowski. He shares a few of his favorite pumpkin recipes to try at home. 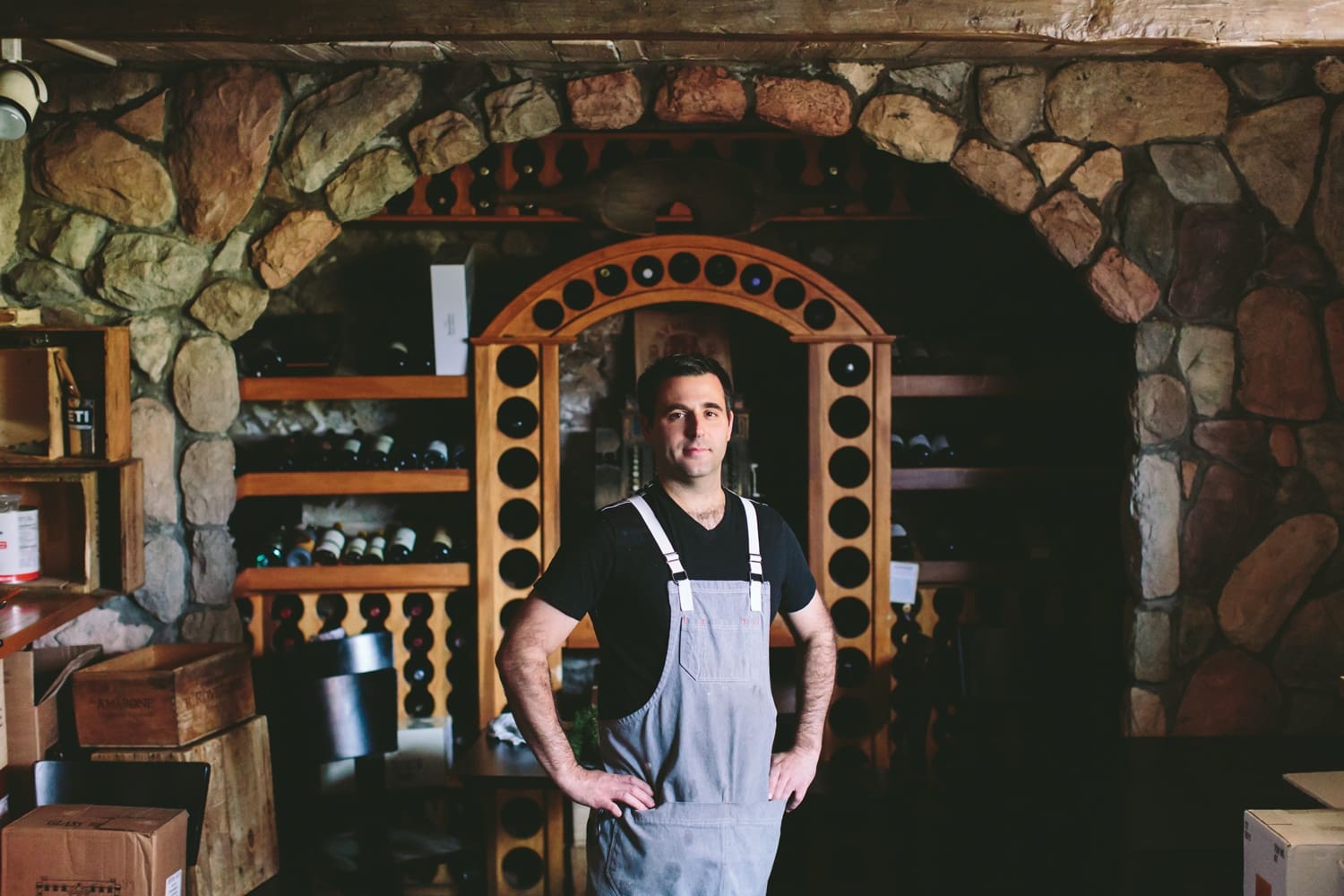 The executive chef of Chandler’s restaurant in Petoskey, Tommy Kaszubowski, really, really likes Halloween. “It’s my favorite holiday. My mom always made it very special for us growing up. It’s a lasting memory, and I carry on the tradition by just going bonkers with my three kids,” he says. Costumes, decorations, the whole nine yards. And pumpkins, of course—lots of pumpkins.

With his excellent knife skills, this chef is, of course, capable of carving out some pretty awesome jack-o’-lantern faces. But it doesn’t end there. “Bill’s Farm Market just outside of town has piles of pumpkins as big as this space,” Kaszubowski says, motioning his hands to encompass all of it. “As soon as I see them, I know that we’re turning the corner on the seasons. I can change to heartier, richer menu items—and that’s exciting.”

Kaszubowski suggests people look beyond pumpkin as just a pie filler, and he’s doing his part to shed new light on its culinary applications, showcasing it in his restaurant and here for Traverse Magazine/MyNorth in a captivating array of sweet and savory dishes (recipes below!). “I think pumpkin is an underutilized and misunderstood ingredient,” he says. “People don’t really know what to do with it, but it’s so versatile. And pumpkins are cheap and plentiful everywhere in Northern Michigan at this time of year, so why not use them?” Kaszubowski acknowledges, however, that a few things might initially daunt the novice pumpkin cook: “Pumpkins are hard to cut. You need a good, sharp, sturdy knife, and you need to be careful. Also, the prep and cooking are pretty work-intensive and time-intensive—peeling, scooping out the seeds, roasting, cooling, pureeing … It’s a little bit a labor of love, but the result is definitely worth it.”

That last comment could serve as Kaszubowski’s motto ever since he first set out from home in tiny Presque Ile Harbor on Lake Huron at age 20 to pursue a culinary degree at Schoolcraft College in Livonia. He loved being there, and he put in the labor to perfect his craft. “I used to literally live at the school,” he says. “I would head right back into the kitchen after class or on weekends to make stocks and sauces and demi-glaces—I supplied the entire culinary program with those.” 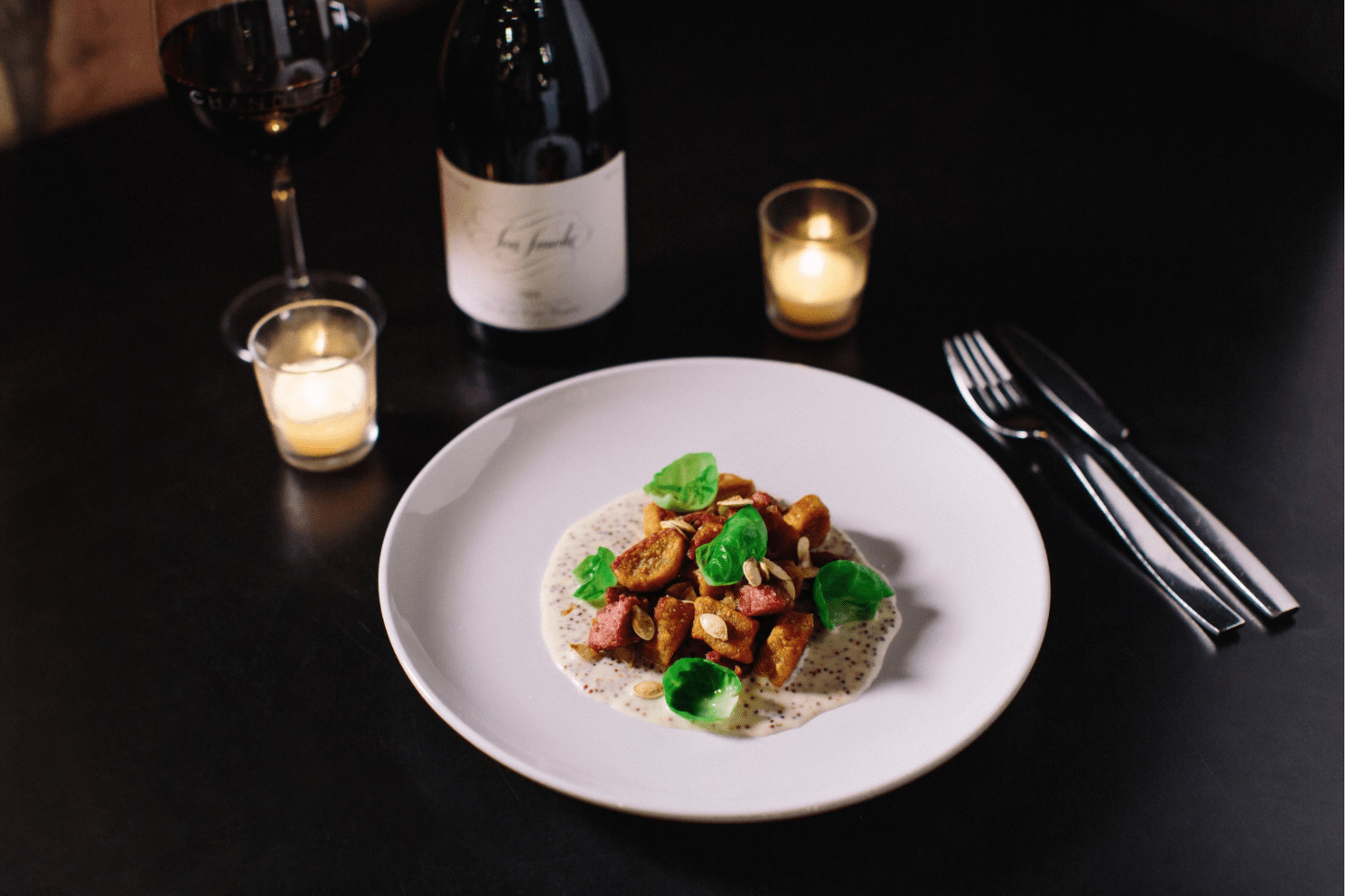 Kaszubowski says Chef Dan Hugelier was by far his biggest inspiration during culinary school. “Everything I do is something he taught me. He was the head instructor, a certified master chef, and he took me under his wing.” Under Hugelier’s tutelage, he developed a keen appreciation for the art of making sauces. “That’s the first thing that really jumped out at me. And that’s still my favorite part of the job,” he says. “Sauces really bring a dish together.”

Chef Brian Polcyn was another mentor at Schoolcraft. Kaszubowski was his butchery sous chef during his last year at school. “I helped him test and write recipes for his Charcuterie cookbook, and I also worked at his Five Lakes Grill where I learned how a professional, high-end restaurant works. I did the same thing there that I had done in culinary school, coming in to cook even when I was off the clock because I just wanted to make better food.” 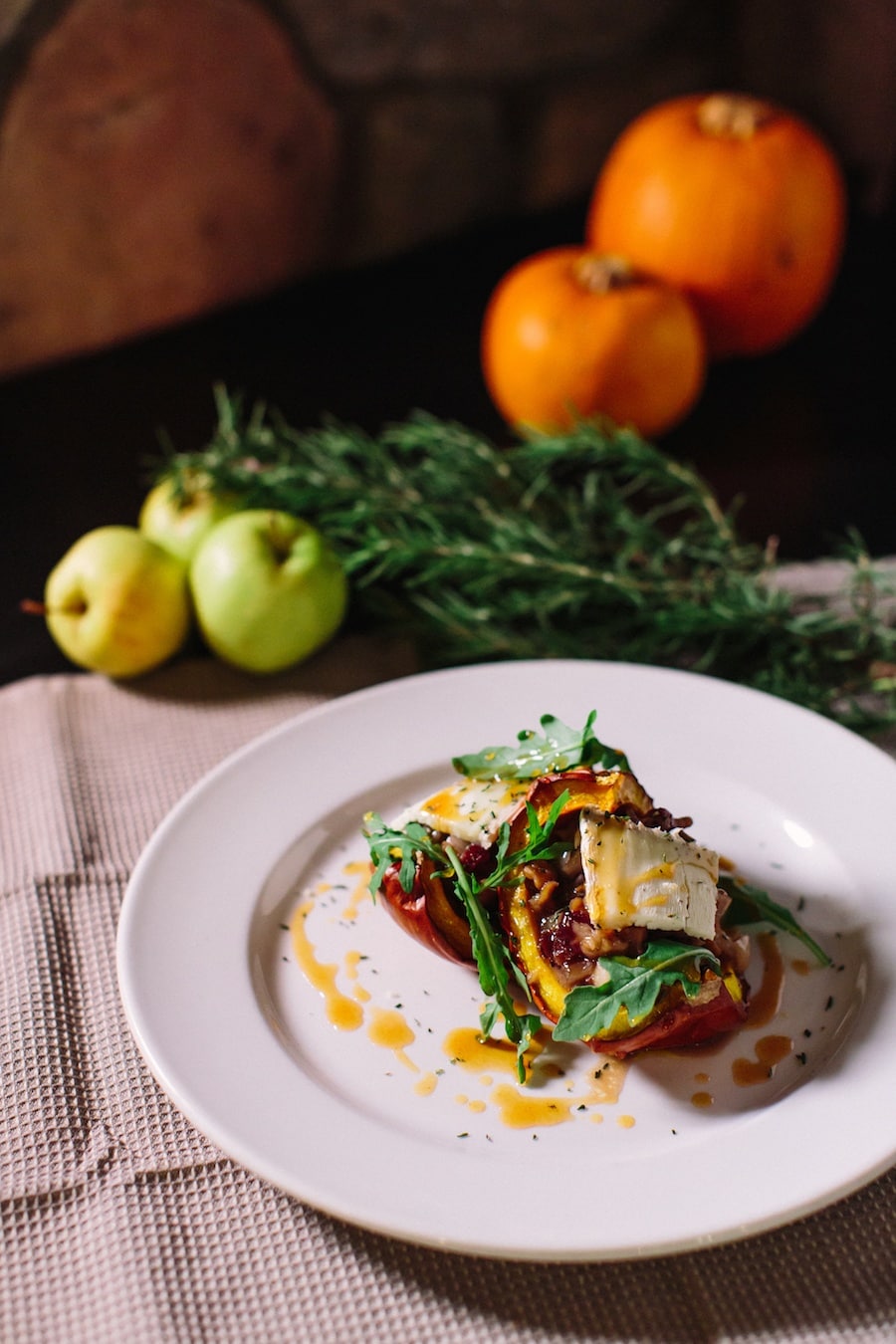 In the decades between starting culinary school and Chandler’s, Kaszubowski headed up the kitchens of some of the most highly acclaimed restaurants in the Midwest, working with Takashi Yagihashi at Tribute in Farmington Hills and at Yagihashi’s namesake 3-Michelin-star establishment in Chicago; with Doug Katz at Fire, Food and Drink in Cleveland; and with Harlan “Pete” Peterson at Tapawingo in Ellsworth. “Working with Pete was awesome,” he says.

In 2009, soon after Tapawingo closed, Kaszubowski met Chandler Symons, whose father, Tom, had started the family food and dining dynasty back in the mid-1950s (with Symons General Store) that eventually spawned Chandler’s and Pierson’s Grill and Spirits. “I had about a six-hour interview with Chandler, he hired me the next day,” Kaszubowski says. “This is more a casual-meets–fine dining restaurant. Chandler and I click really well. He gives me pretty much free rein to be creative and playful with my cooking, but we always consult on things, and we never compromise on quality.” 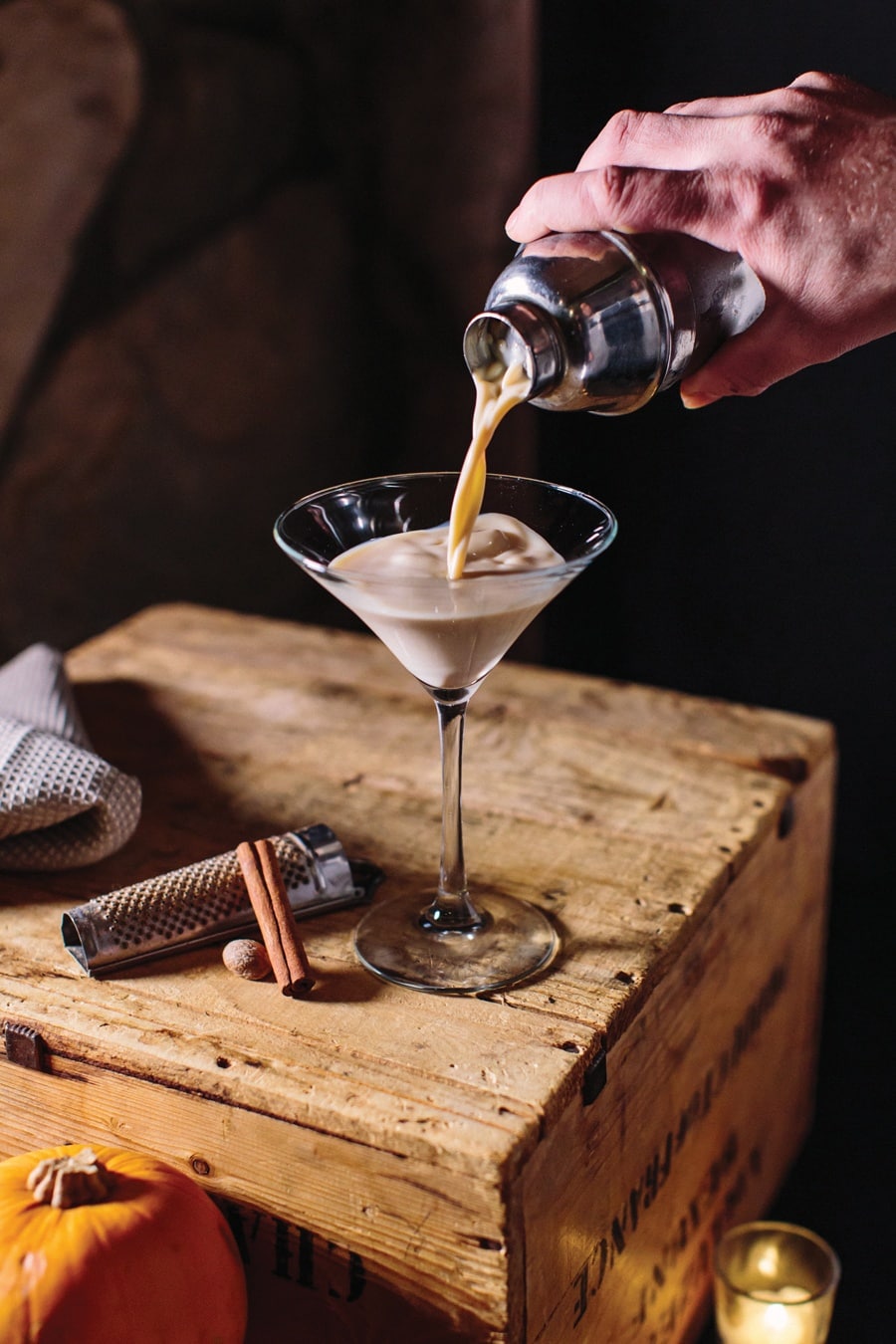 The potential for creativity is one of the most intriguing aspects of working with pumpkin, says Kaszubowski. Besides the fact it can be served in many different forms, pumpkin works with a range of foods and flavors. “Something people often don’t know is that it’s great with shellfish—especially lobster—but also shrimp and crab, and fish in general. As for local fish, I like walleye—it has a flinty, earthy flavor that goes very well with pumpkin.”

Smoked meats and game are also good foils for pumpkin, says Kaszubowski, as are truffles and peppery greens. In the herb and spice repertoire, he reaches for sage, rosemary, parsley, nutmeg, cinnamon, ginger, star anise and Madras curry. “Pumpkin takes both the sweet and the savory beautifully,” he says. “Caramel and pumpkin are wonderful together, and of course maple syrup.” 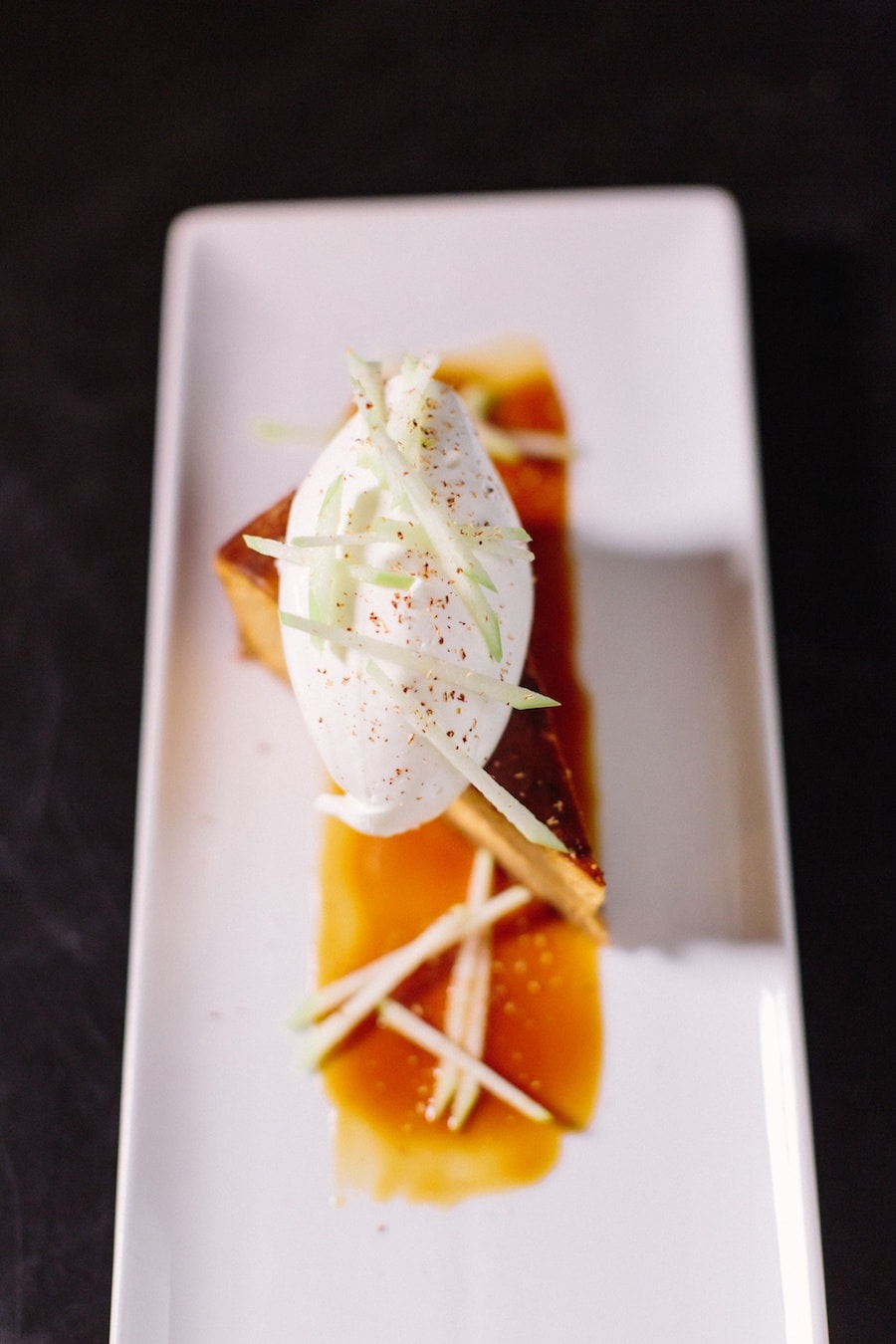 One can’t help but notice Kaszubowski is smiling broadly when he’s talking about what he is cooking. “Well, that’s the thing,” he says, “I never stop thinking about food! The one thing I can say about being a chef is that I definitely know it was what I was meant to do from the time I was little. Lucky for me, for some reason, everything just all clicked and came together.”

To anyone who has the privilege to experience Kaszubowski’s talent, the reason is pretty obvious.

How to Cook Pumpkin

Cooking the pumpkin ahead of time is the first step for most pumpkin recipes. Kaszubowski’s favorite method for this is roasting low and slow, at 325 degrees, to concentrate the flavor. “If I’m using diced pumpkin for a recipe, I first sauté it well in a pan on the stove in a little oil, and then spread the pieces out on a sheet pan and roast until tender. If I’m going to do any kind of puréed preparation, I’ll just cut the pumpkin in half, scoop out the seeds and fiber, drizzle it with olive oil or butter, sprinkle on some salt and pepper, and then put the halves cut-side down in a pan so they steam roast. They are done when the flesh is easily pierced with a fork.”

This story is featured in the October 2016 issue of Traverse, Northern Michigan’s Magazine. Get your copy.