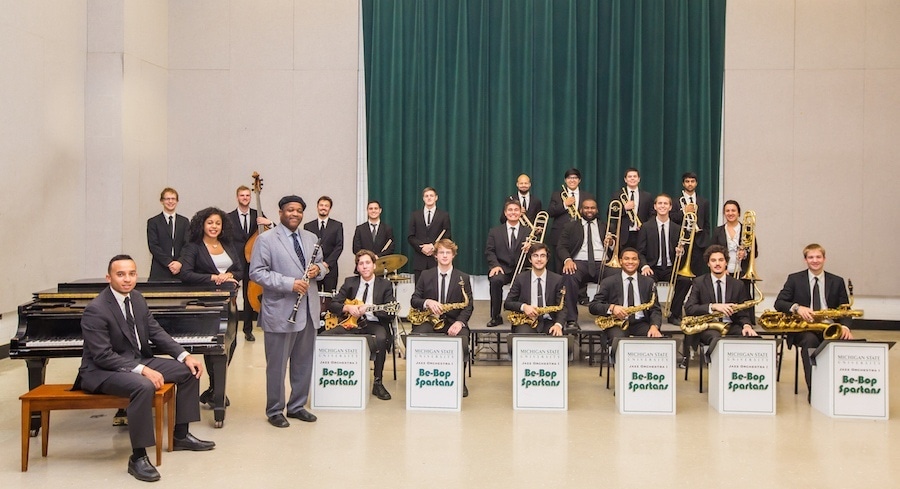 MSU Be-Bop Spartans will perform the repertoire of the great jazz masters as well as a wide range of soul, swing, blues and gospel with MSUFCU Guest Artist in Residence Mr. Russell Malone and conductor, Mr. Rodney Whitaker. The band includes saxophone, trombone, trumpet, bass, drums, piano, guitar and vocalists, and frequently conducts workshops, concerts and master classes with children in various public schools in the state of Michigan through the College of Music’s Outreach and Engagement Program.

Guest Artist Russell Malone’s first guitar was a plastic green toy his mother bought him. Only four years old, Malone strummed the little guitar all day long for days on end trying to emulate the sounds he had heard from guitarists at church in Albany, Georgia. Then, at age 12, he saw George Benson perform with Benny Goodman on Soundstage. Malone has said, “I knew right then and there that I wanted to play this music.”

A self-taught player, Malone progressed well enough to land a gig with master organist Jimmy Smith when he was 25. “It made me realize that I wasn’t as good as I thought I was,” Malone recalls of his first on-stage jam with Smith. After two years with Smith, he went on to join Harry Connick Jr.’s orchestra, a position he held from 1990-94, appearing on three of Connick’s recordings. One of the most commanding and versatile guitarists performing, he can move from blues to gospel to pop to R&B and jazz without hesitation, a rare facility that has prompted some of the highest profile artists in the world to call upon him including Diana Krall, Gladys Knight, Aretha Franklin, B.B. King, Natalie Cole, David Sanborn, Shirley Horn, Christina Aguilera, Ron Carter and Sonny Rollins.

Russell Malone, Rodney Whitaker and the MSU Be-Bop Spartans will give audience members a swinging, jazzy afternoon as they perform soul, swing, blues and gospel tunes.

Tickets are $15 for adults and $5 for students, and available online at MyNorth Tickets. For more information visit Crooked Tree Arts Center.

More Things to Do in Boyne City