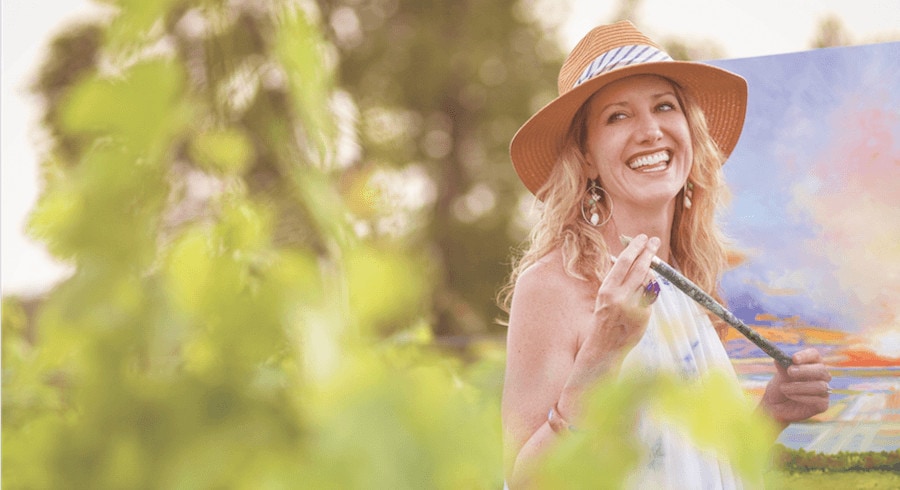 Leelanau County vineyards and wineries have earned national attention for producing award-winning wine. To help connect people to the growing wine region, the Leelanau Peninsula Wine Trail partnered with Grand Rapids artist Stephanie Schlatter to create beautiful landscape paintings of each winery in the region. The result, Project 24, is stunning,

In the same way a Miles Davis record sounds way more chill if you know something about the man, Lorri Hathaway insists you’ll get more out of your wine if you know a bit of its biography. “It’s pretty common for people to go to festivals and drink wine and not really know what’s in their glass,” says Hathaway, the executive director of the Leelanau Peninsula Wine Trail. “We want people to know that this comes from the earth, it comes from these talented winemakers, it comes from these beautiful vineyards.”

But Hathaway wanted to tell the stories of the region’s wines in a way that went beyond the typical tasting room banter or festival forum with vintners. So she turned to Grand Rapids artist Stephanie Schlatter, who had been making regular treks Up North to paint the scenery in Michigan’s wine country for the past few years.

The two of them eventually hatched an idea for something they dubbed “Project 24,” where Schlatter would travel around the county and paint scenes from all 24 wineries on the Leelanau Peninsula. Then, at a festival, they would pair each of those paintings with a corresponding wine, allowing people to explore Schlatter’s take on the landscapes that produced those wines—right at the moment of tasting.

Artistically speaking, is there a risk of the project getting a little one-note—24 paintings of a small geographic wine region with a relatively uniform, albeit captivating, landscape?

Schlatter says all of the paintings work with each other to form a unified impression of the countryside—much like the vintners here are working together to create a region that has an identifiable brand. “Among the vintners, the spirit up here is really one of collaboration,” Schlatter says. “People don’t travel to Napa Valley in California just to go to one winery. They travel there because it’s a wine region. And that’s what they’re trying to create here. They share and critique and collaborate a lot. The thing I heard a lot from vintners is that they don’t want the guy down the street making bad wine because that reflects poorly on the industry up here.”

Lorri Hathaway says festival attendees had so much fun with the pairing of art and wine, she’s already decided to do something similar next year. “We’re going to have John Robert Williams photograph all of our vintners. He has a real talent for capturing people’s personalities. So it’s just another way we can tell our story.”

The only thing they might have to change is the project’s name. In the year since Project 24 has been underway, the region has added two new wineries—bringing the running total to 26.